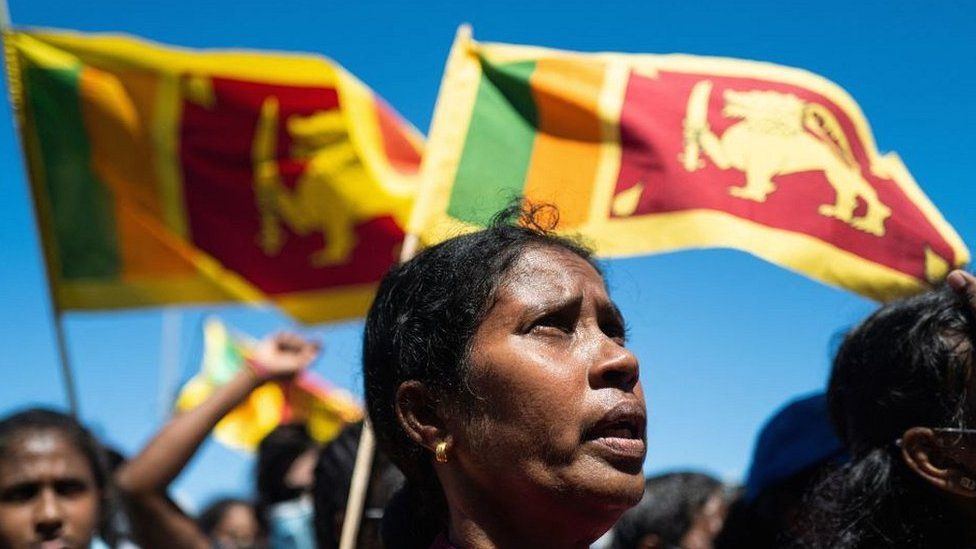 As Sri Lanka suffers its biggest economic crisis since its independence in 1948, the burden has rested squarely on the shoulders of one man: President Gotabaya Rajapaksa, nicknamed "Gota" by many.

Sri Lanka is shutting off street lights to save electricity, according to a minister, as the country's worst economic crisis in decades causes additional power outages and halts trade on its major stock exchange. Because the government does not have adequate foreign cash for fuel imports, the island's 22 million residents are subjected to rolling blackouts lasting up to 13 hours every day. 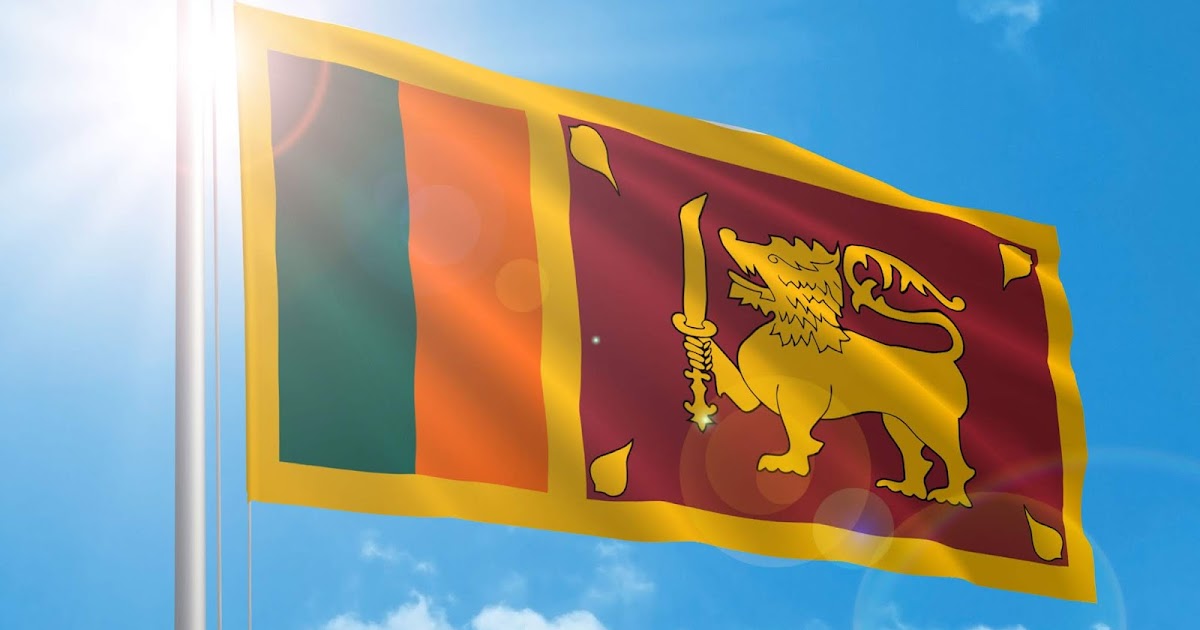 On February 4, 1948, the United States recognized Ceylon (Sri Lanka) as an independent state with the status of Dominion within the British Commonwealth of Nations, as stipulated in an agreement between the governments of the United Kingdom and Ceylon. In a letter dated February 3, 1948, President Harry S. Truman gave American recognition to Sir Henry Moore, Governor-General of Ceylon.

On October 29, 1948, diplomatic ties were established when the Ceylon Embassy in Washington, D.C. opened. Sir Claude Corea was appointed as Ambassador Extraordinary and Plenipotentiary. When Felix Cole presented his credentials as American Ambassador Extraordinary and Plenipotentiary on August 3, 1949, diplomatic ties were established.

Sri Lanka technically declared bankruptcy when it announced a temporary suspension of repayment of all external debt totaling roughly $ 50 billion, claiming that the nation could no longer meet its obligations due to depleted financial reserves caused by external and domestic shocks. This meant that, with a stroke of a pen, the Finance Ministry waved farewell to an unparalleled track record of fulfilling its foreign debt commitments since independence, which our predecessors had constructed.

Making an announcement is a simple choice for a Finance Ministry official, but the consequences are considerable. This is why, rather than retirees, the country needs individuals with a vision and a tangible sense of the future to make decisions for the 22 million people. As the Financial Times points out, a "negotiated or soft default" is seen as more respectable than a disastrous "hard default." But, given that the urgent requirement was $70 million, couldn't we have waited until we had reached an agreement with the IMF? In the near term, there were undoubtedly better possibilities.

What Happened To Sri Lanka?

Most communities were economically self-sufficient millennia ago. They made whatever the inhabitants required. Despite the fact that the world has become a village, modern nation-states are rarely self-sufficient. They sell their excess. They generate and save foreign exchange reserves. They also import to compensate for their limitations. Sri Lanka's present dilemma is a lack of funds to purchase what it requires from the outside world.

Sri Lanka has requested a $1 billion credit line from India to fund crucial imports, according to Reuters, as the island nation faces its worst economic crisis in decades. This is in addition to the $1 billion offered by India to help Sri Lanka, which is struggling to pay for essential imports like food and fuel.

Its foreign exchange reserves have fallen by 70% since January 2020. Sri Lanka's foreign exchange reserves declined to $2.31 billion in February, a $779 million decrease from December 2021 to January 2022. This slowed its imports, resulting in a severe scarcity of key vital products. Its currency has been significantly devalued. Its efforts to attract generous global financiers have been largely futile.

What Caused The Economic Crisis?

According to experts, the problem has been building for years, fueled by a little poor luck and a lot of government incompetence.

According to Murtaza Jafferjee, chair of the Colombo-based research group Advocate Institute, the Sri Lankan government has borrowed large sums of money from foreign lenders to pay for public services during the last decade.

This borrowing spree has coincided with a succession of hammer blows to the Sri Lankan economy, ranging from natural disasters such as heavy monsoons to man-made disasters such as a government ban on artificial fertilizers, which has wrecked farmers' harvests.

This hampered its imports, resulting in a significant shortage of critical items. Its currency has been severely depreciated. Its efforts to lure wealthy global investors have mainly been in vain.

In an attempt to revive the economy in the face of a large deficit, President Gotabaya Rajapaksa lowered taxes. However, the strategy backfired, reducing government revenue. As a result, rating agencies downgraded Sri Lanka to near-default status, denying the government access to international markets.

Sri Lanka was thus forced to rely on its foreign exchange reserves to pay off government debt, reducing reserves from $6.9 billion in 2018 to $2.2 billion this year. This had an impact on imports of fuel and other necessities, causing prices to skyrocket.

To top it all off, the government floated the Sri Lankan rupee in March, meaning its value was set by the demand and supply of foreign exchange markets. That decision looked to be intended to devalue the currency to qualify for a loan from the International Monetary Fund (IMF) and to stimulate remittances. However, the rupee's depreciation versus the US dollar exacerbated the situation for ordinary Sri Lankans.

On-Going Protests On The Capital Of Sri Lanka 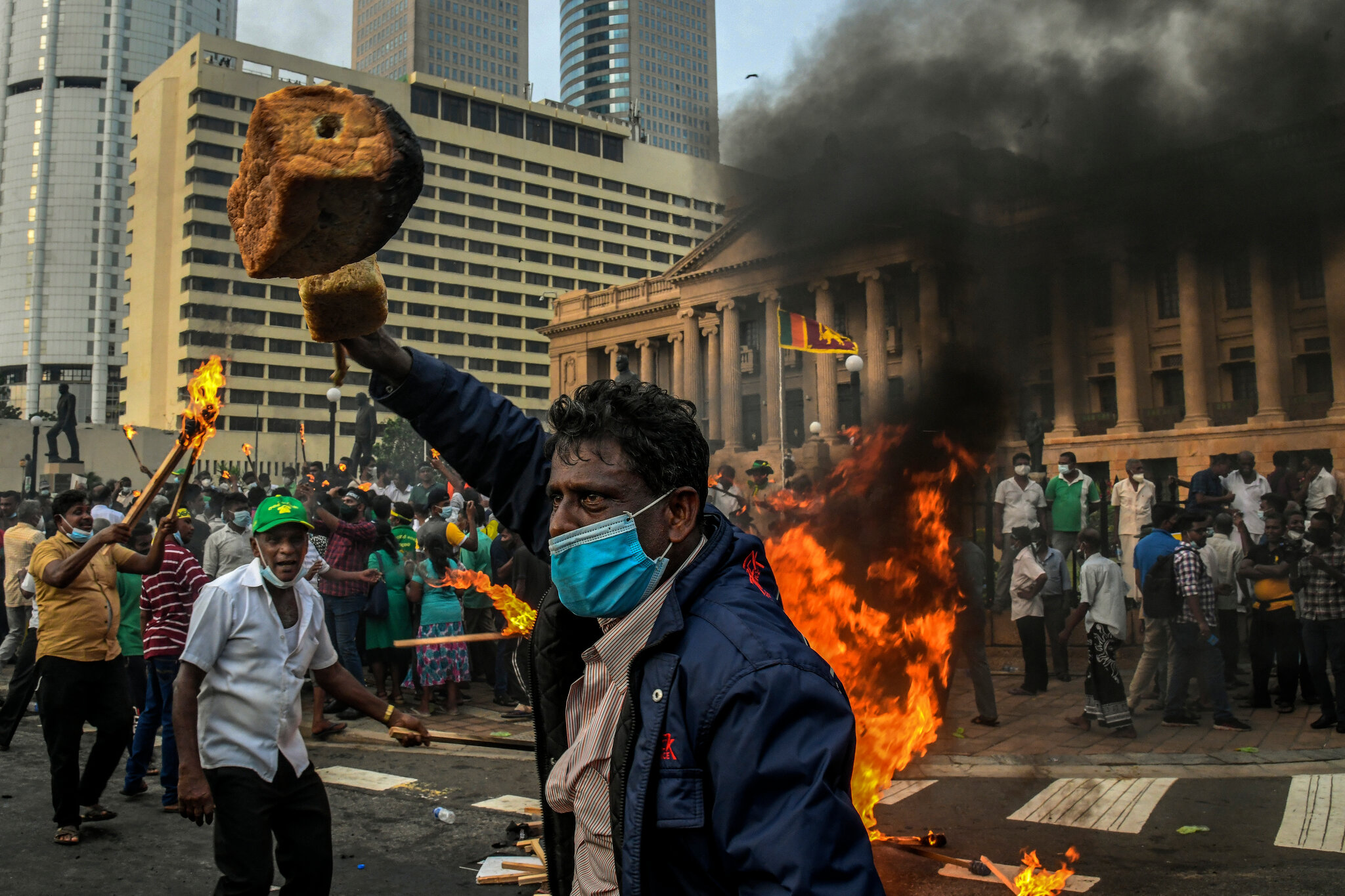 Sri Lankan Protest in capital with fire and burnt bread

Police deployed tear gas and water cannons to disperse the protestors, and then imposed a 36-hour curfew. On April 1, President Rajapaksa proclaimed a countrywide state of emergency, granting police the authority to arrest anyone without a warrant and blocking social media services.

Despite the curfew, protests continued the next day, causing police to arrest hundreds more protestors. Protests have persisted in the days afterward, although they have been mostly peaceful. Crowds of student demonstrators encircled Rajapaksa's apartment again on Tuesday night, screaming for his resignation. On April 5, the emergency ordinance was repealed.

Sri Lanka is currently seeking financial assistance from the IMF as well as reaching out to regional nations that may be able to assist. President Rajapaksa stated in his monthly speech last month that he had assessed the benefits and drawbacks of cooperating with the IMF and had chosen to seek a bailout from the Washington-based agency, something his administration had been reluctant to do.

Sri Lanka has also asked for aid from China and India, with New Delhi already offering a $1 billion credit line in March – but some analysts worry that this support may prolong rather than resolve the problem.

The government's curfew, social media blackout, and police action in breaking up protests could prevent or discourage people from expressing their grievances, she said, adding that such measures "should not be used to stifle dissent or hinder peaceful protest." She said the UN was keeping a close eye on the situation and warned against "the drift to militarization and the weakening of institutional checks and balances in Sri Lanka."