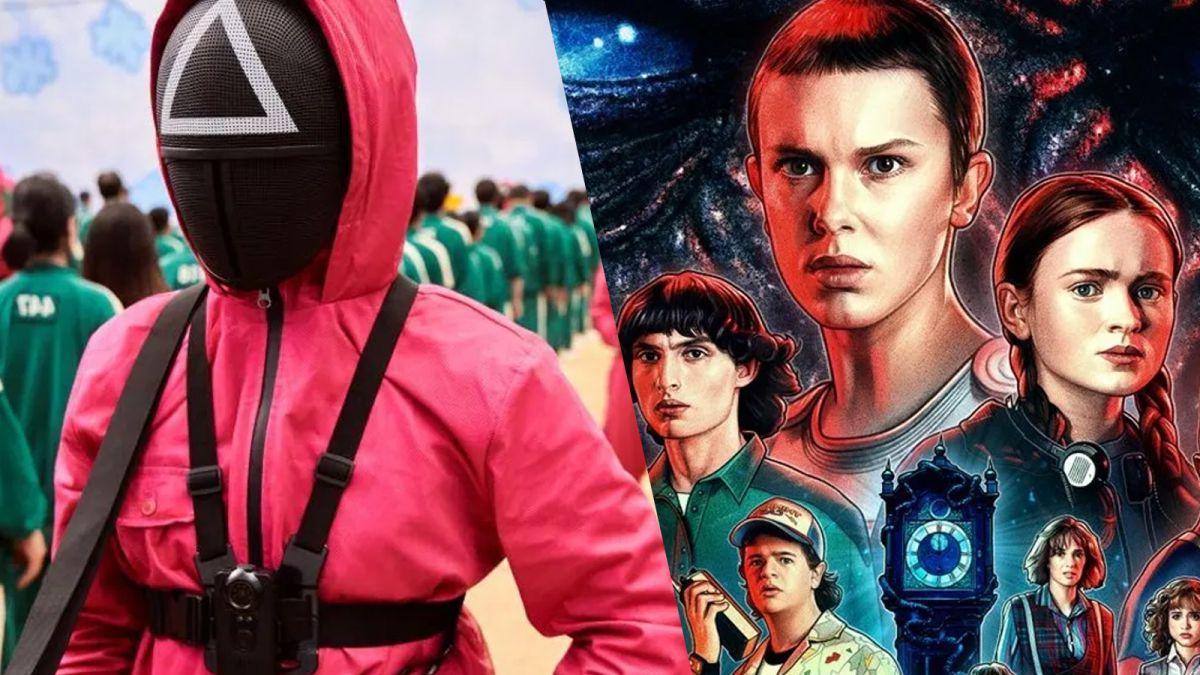 Stranger Things season 4 possible to dethrone squid game as the most popular series in the history of Netflix.

The conclusion of Season 4 of Stranger Things has helped the show maintain its position as the most watched original series on streaming services, coming in second only to Squid Game.

The fourth season of Stranger Things has already been shattering records for Netflix, and it has now achieved yet another significant milestone for the streaming service by becoming only the second title in the history of media to have more than one billion hours of viewing time.

Stranger Things season four was already bigger and better than any previous season. It was obviously more expensively made, with a larger cast and a clearer understanding of why all the monsters, heroes, and hangers-on were there.

The double-bill denouement, which Netflix delayed for a month to build anticipation, is even bigger. It's a crazily, gloriously vast four-hour film that does everything fans could have hoped for and then some. But, even if it hasn't exactly outstretched itself yet, you have to wonder where Stranger Things can go from here.

Waiting for a gang of valiant teenagers to launch a final assault on Vecna, the demon who roams a dismal dimension under Hawkins, Indiana, in 1986.

Eleven (Millie Bobby Brown), a psychic superheroine, has unlocked memories from her childhood spent in a secure facility for children with unusual abilities, revealing that she opened the interdimensional portal while confronting One, a murderous fellow inmate, transforming him into the vengeful Vecna.

Meanwhile, a group of likable adults are trapped in a filthy Soviet Union prison, battling a beast from a previous season.

As a result, the final two episodes of Season 4 are shockingly talky, providing practically every character a poignant, watershed two-hander with a significant other.

The show's barely discernable - although fans who study over every scene have surely discovered it - hints about Will (Noah Schnapp) being gay become something more overt during his poignant monologue about learning to live with being "different."

Stranger Things may be an indulgent 1980s ode to horror, cold war thrillers, hacker flicks, fantasy, and films like The Goonies or Stand By Me in which a slew of unsupervised kids try to save the day, but its creators, the Duffer brothers, aren't merely snobs.

They comprehend what underpins their reference points, particularly how the "neighborhood apocalypse" genre operates.

These stories say it's OK to be different - to be timid and furious, or a Dungeons & Dragons nerd, or secretly gay, or a heavy metal freak - because your small town might be the most important location in the world, and you might not be odd, but wonderful.

The Korean drama series has devolved into a "water cooler conversation" show. When it first came out last year, it captivated audiences in the same way that shows like "Game of Thrones" and "The Walking Dead" did.

The show revolves around a competition of various children's games in which the penalty for losing is death. Over 400 players, all in various levels of financial crisis, compete for the top prize of 45.6 billion Korean won (approximately $38 million in US dollars).

The show's strongest suit is its cast of characters. In a drama like this, the audience naturally follows the characters as they form alliances to advance and eventually betray one another in the pursuit of money.

Each character's writing is so good that when some of them start to fall, their deaths have a lasting impact on both the in-universe characters and the audience. We are experiencing grief as the survivors continue to play the games, leaving the fallen behind.

Our main character is Seong Gi-Hun (Lee Jung-Jae), a divorced parent who is deeply in debt due to gambling. When he arrives at the games, he discovers that his childhood friend Cho Sang-Woo (Park Hae-Soo) is there, along with a slew of underdogs. When the bully characters start making havoc, they establish the alliance that viewers may root for.

Death is a recurring theme in the show. With 456 competitors, the field must be narrowed down. At first, it's the background cast that begins to die off, which the authors manage to make poignant, which is not often the case when extras die in American series or movies.

Each new game raises the stakes to a new level. It's nerve-racking even to watch players carve a figure out of a Dalgona cookie. When the players began to drop, each gunshot felt like time was ticking away for the main characters, increasing the pressure that carried over into the subsequent games.

Then it's time for some of the main characters to perish.

The players vote to leave the games and return to their normal life in the second episode. Only then do they understand why they must return to battle for the 45.6 billion dollars they have won.

Gi-mother Hun's is ailing, and he is still in debt. Sang-Woo is wanted for stealing millions of dollars. Kang Sae-byeok (HoYeun Jung), a calm and reticent woman, is responsible for her younger brother.

Abdul Ali (Anupam Tripathi), a lovably naive man, lives in poverty with his wife and son. Everyone has a motive to fight, which makes their acts more understandable and the deaths of the last three more terrible.

All of the death and sacrifice served the writer's message about wealth, selfishness, and the effects these things have on people. "Squid Game" isn't violent only for the purpose of being violent. It makes a valid point.

That point is highlighted when wealthy viewers known as "VIPs" arrive at the game site and place bets on which of the poor participants will die next. They are unconcerned with the fact that they are playing with people's lives, and the size of their bank balances indicates that they couldn't care less.

While the subject of "wealthy individuals gambling with people's lives for amusement" has been addressed in other kinds of media, "Squid Game" remains as captivating as people say online. My aim is that it will encourage people to consume more international media, as there are some true treasures out there.

Its caustic indictment on capitalism is spot on, and the total product is elevated even further by its well-written characters thrown into a twisting and tragic plot.

Stranger Things 4 has already broken records for Netflix, as it has become only the second title ever to have over 1 billion hours viewed.

One scene in one episode of Stranger Things

The coming of the season finale on July 1 has seen statistics once again climb, as season 4 has now tallied up 1.15 billion hours of viewing time throughout the nine episodes.

Stranger Things season 4 is proving to be an even greater monster than previous seasons, and it's going to come the closest to catching Squid Game in terms of overall Netflix viewership.

This feat is notable since it makes Stranger Things the most watched show on Netflix in the English language, with only the South Korean monster Squid Game surpassing it.

Squid Game, of course, was dubbed into English but released in its native language with subtitles, and the series received over 1.65 billion hours of viewing time in its first 28 days on the platform.

With volumes only counting for the first four weeks, Stranger Things might potentially dethrone Squid Game as the biggest ever title with its upcoming episodes.

Stranger Things has already earned its spot as one of the largest shows of all time, with season 5 expected to be the series' final season, and this will only grow in the future with spin-offs already in the works.

Stranger Things season 4 is attempting to match the 28-day audience of Squid Game, which was 1.6 billion hours streamed on the service. 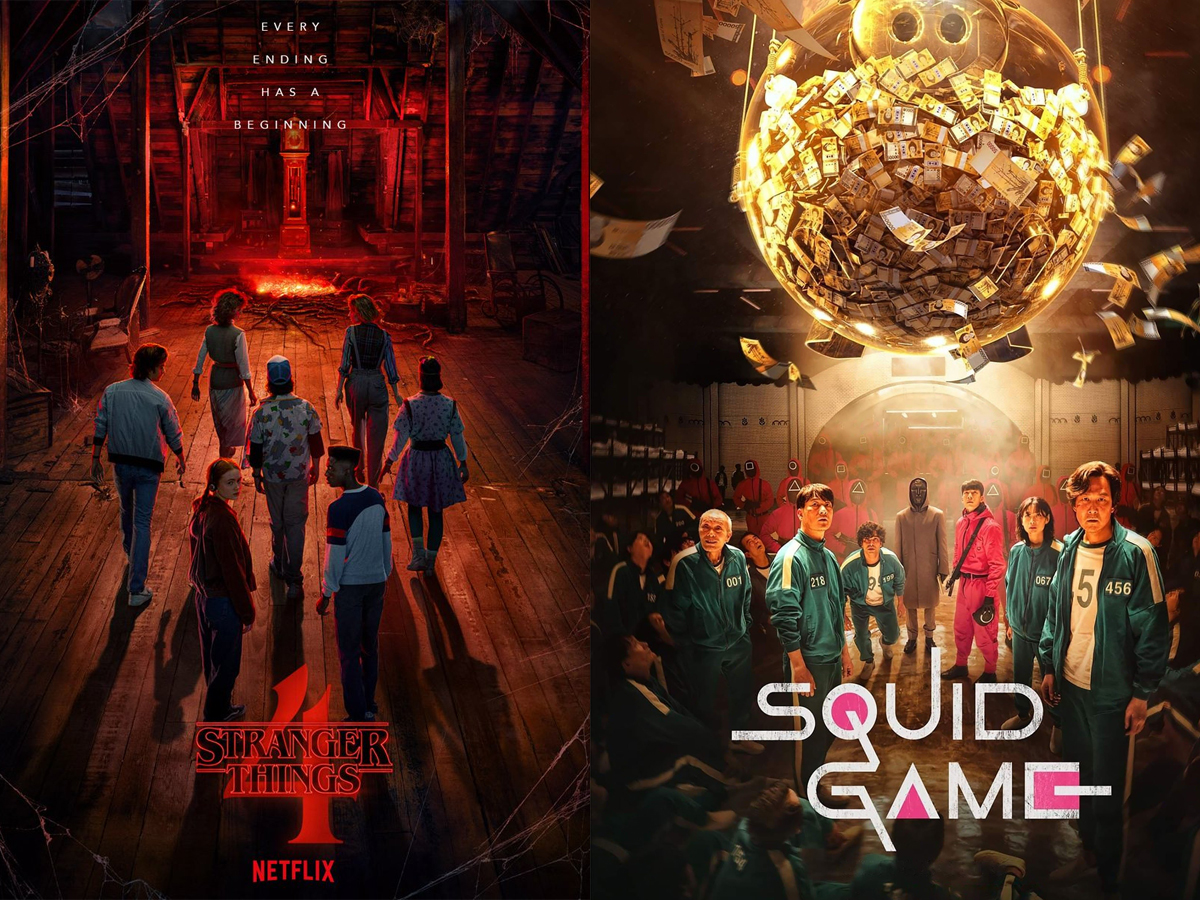 Stranger Things' 28-day window has now expired, and despite reaching #1 for roughly three weeks and still holding on to #2, it will fall well short with "only" 930.3 million hours viewed in the first 28 days.

However, there is a catch. It is only Part 1 of Season 4, with Part 2 premiering this Friday. The hours spent watching the two episodes, which total four hours as supersized entries, will be added to the 28-hour total. So far, around 9 hours of the show have broadcasted.

However, if you do the arithmetic, Stranger Things will most certainly fall short of Squid Games' overall total (views of part 1 after this will not count toward the initial 28 day total, which is now locked).

If everyone who watched the first 9 hours of Part 1 watched the second 4 hours, the total time would be roughly 1.2-1.3 billion hours, which would still be 3-400 million hours shy of Squid Game.

However, this would still be extremely impressive, considering nothing else has come close to Squid Game up until this time.

Stranger Things also has that possible disadvantage. Potential viewers have three past seasons to watch before this one. However, all Squid Game viewers were just in season 1. Though, for megahits, it's not uncommon for viewership to increase over time, as we saw with Game of Thrones, whose audience grew year after year.

If fan campaigns watch the last two on repeat to boost it, it may work if there are enough repeat viewings. But it would have to be a large sum.

Is Stranger Things 4 Is Last Season?

Stranger Things' fourth season finale literally turned the show's world upside down: the Upside Down has officially arrived in Hawkins. Despite Netflix's plans for spinoffs, the series will conclude with the upcoming fifth and final season.

How Many Episodes In Stranger Things 4 Part 2?

Volume 2 may only have two episodes, but they are both feature-length: Episode 8 is 1 hour and 25 minutes long, while the grand finale is 2 hours and 30 minutes long.

Will There Be Stranger Things 5?

Stranger Things producers Matt and Ross Duffer stated in an open letter to fans via The Hollywood Reporter that Season Five would be the series' final season.

Stranger Things season 4 could break Squid Game's overall 2.2 billion hours viewed record, while the series has already already surpassed it. But, in terms of this 28-day time constraint, Stranger Things will be extremely difficult to overtake Squid Game without a major rise in the next two episodes.