Street Photography - 1000 Photographs Of Random Individuals On The Street 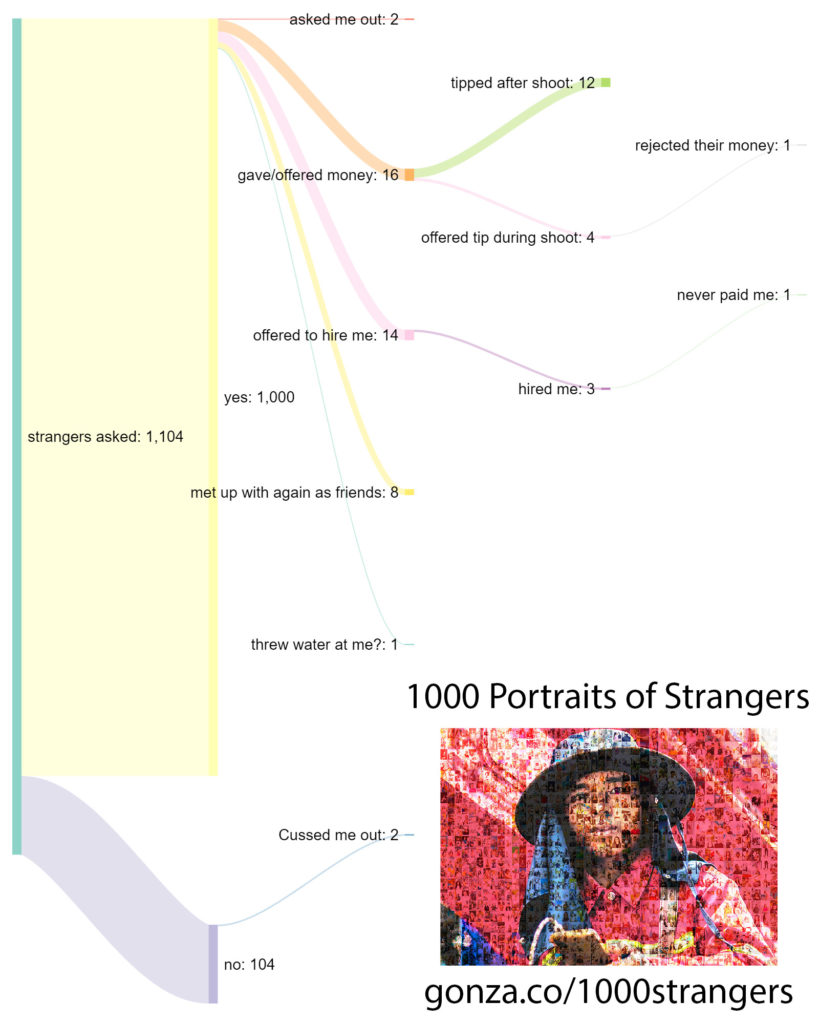 But did you know that there is one who took the challenge of photographing 1000 people in the street? Reddit user known by the codename u/gonzalocdlp posted this incredible street photography.

Gonzalo Casas de las Penas is the man behind the 1000 pictures taken in the public. Six years ago, he tried to build a portfolio by taking pictures of random people on the street.

His interest in photography brought him all over the world to shoot strangers. Thailand, Peru, Brazil, Myanmar, and the United States of America are the countries on this list.

In the following, you will get a rundown of the challenges that the photographer faced while working to complete 1000 photographs in a public venue.

Meanwhile, one of the girls threw water at Gonzalo de las Penas while capturing a group of teenagers on the street.

On the other hand, while he was taking pictures, someone recognized him from a video, and as he turned around to face them, he was hit by a motorcycle. The impact damaged my lens, but other than that, he was in a good condition.

Another collection of images of random people, this time taken in Chiang Mai, Thailand, where de las Penas is currently working for a firm called True Binary.

During the shoot, a total of 14 people made the suggestion that they should meet again for a paid shoot; however, only three of those people followed through, and one of them did not pay.

Even though he doesn't do street photography for money, some people did offer to pay a good amount. Most of this happened after he told about 200 people.

During the shoots, four people tried to give him money. He politely turned them down, but three of them kept trying. One of them gave him $10, and someone else gave him $100.

On good days, He takes a picture of around 40 people, whereas, on terrible days, he only photographs around 6. This is how Gonzalo approached the strangers to become his subject in his photography project.

When The Task Has Completed

Here are the 1000 pictures captured on street by the professional photographer, Gonzalo Casas de las Penas.

First Batch Of The Street Photography 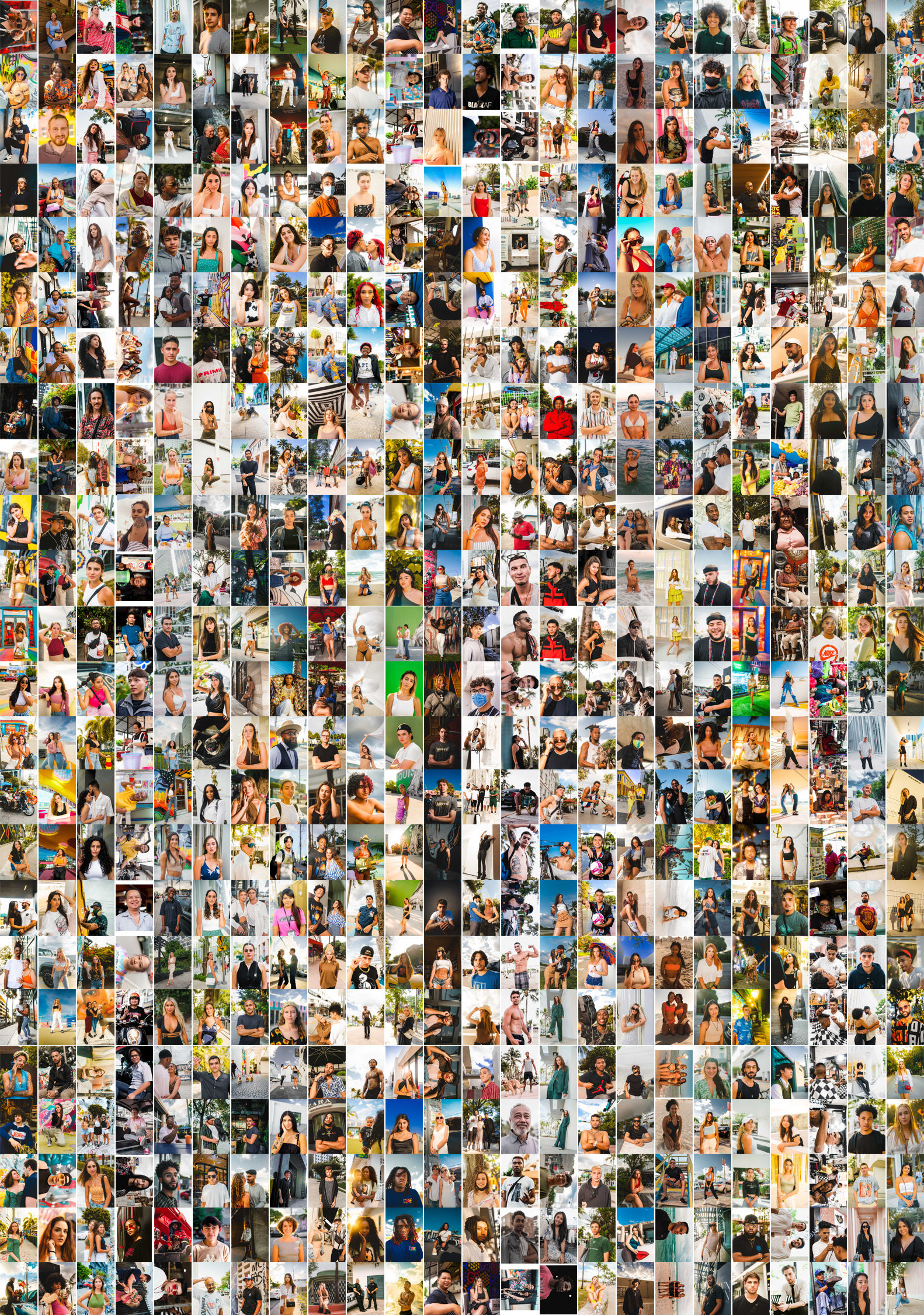 Second Batch Of The Street Photography

The bad news is that around 150 data files were lost as a result of a faulty hard disk being dropped, and some were lost due to inefficient data storage management. 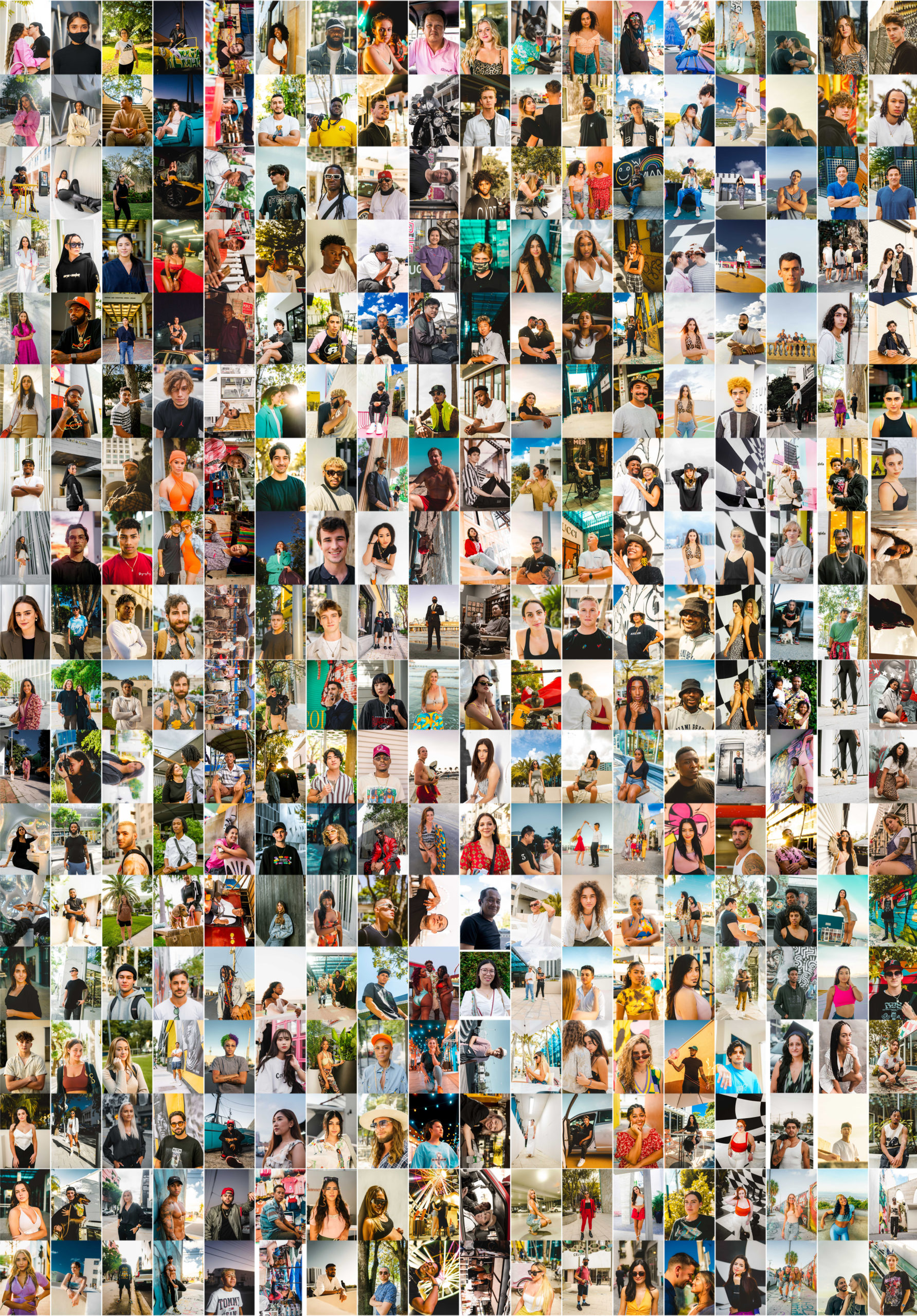 Cyrbercuzco: "If you are a man and got asked out twice, this plan to find dates has a better response rate than tinder."

DasEvoli: "Depends VERY on the country. In Germany, you would probably get around 10% yes and 90% no + some police calls."

Somniumx: "I do street photography in Germany. You can't photograph without permission, So, I ask people. A lot. I would say it's more like 90 percent yes and 10 percent no. But keep in mind, I'm asking nicely, look professional and of course, I look for people that are either interesting looking (style of clothing, hair color,... ) Or doing something special. So I tend to ask people that are way more likely to be open about it in the first place."

dulinwolf asked: "Why did the one throw water at you?"

gonzalocdlp explained: "I described it in the linked data, but basically I asked someone, it was going well and then his friend started yelling at some car for some reason. (I think it was something about looking at her) then threw a water bottle at it. Idk how she didn't know water splashes and pretty much half the water went on me. I left quickly after that whole weird interaction, dude I was photographing seemed chill though."

eric5014: "Cool, a Sankey chart that's not just another job search or budget. Oh, but you still got a job (or three) and some friends and some money... so you included many of the Sankey stereotypes as well!"

TheSearch4Etika: "Do you only ask good-looking people to take their pics? It seems like every person on your Instagram is pretty good-looking."

The Man And The Pigeon On The Street

The photograph was captured in grayscale. A man in a black jacket leans against a fence while feeding a swarm of pigeons on the ground. 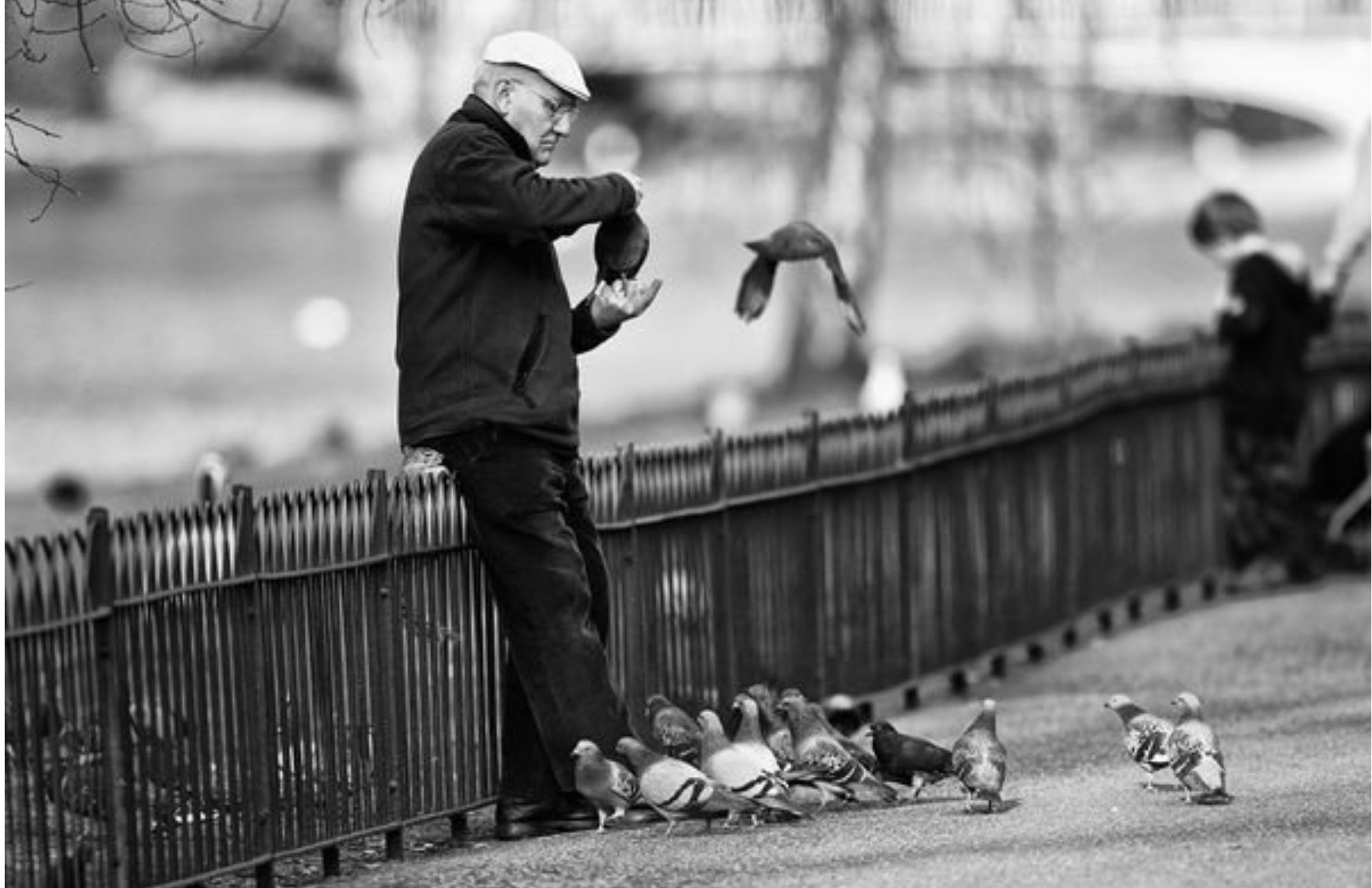 A man and the pigeons on the street

A sweet corn vendor blows smoke from a charcoal grill. Commercialized sweetcorns stand in front of him. Some of the corns are roasted, while others are raw. 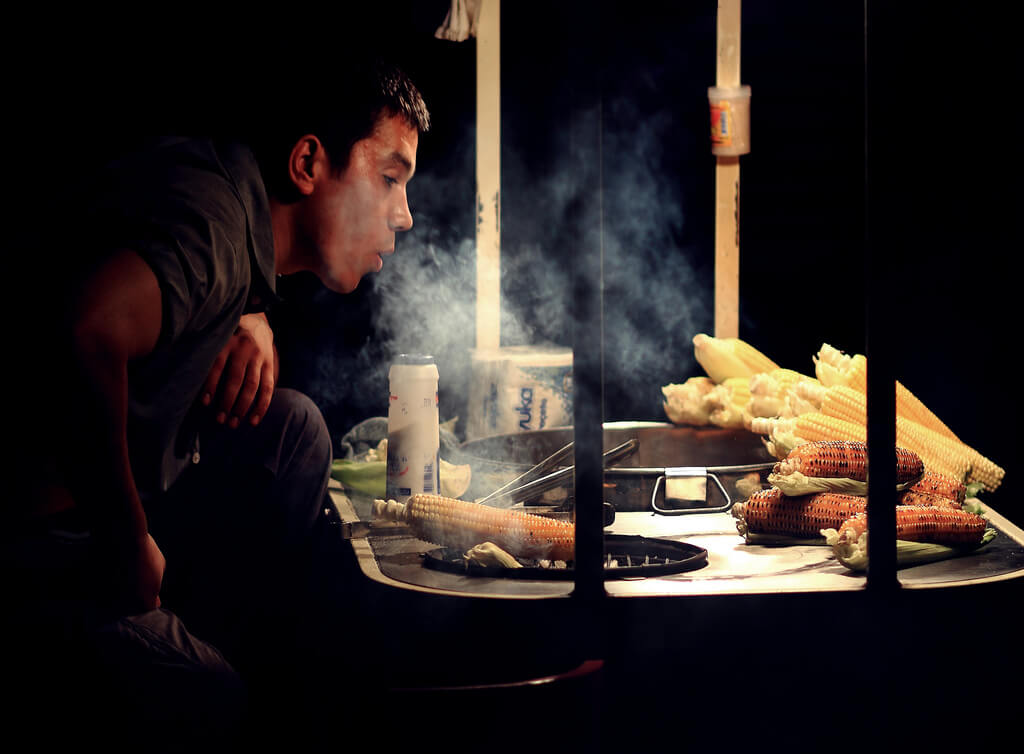 A sweet corn vendor blowing smoke from the burning charcoal

What Is Good About Street Photography?

Street photography allows you to be more aware of your surroundings, which can be beneficial to your creative process. It forces you to become more in tune with the environment that you are in. There are unquestionably a lot more advantages to photographing candid moments, one of which is that it can help you become a better person.

What Techniques Are Used In Street Photography?

What Is The Difference Between Urban Photography And Street Photography?

It's easy to get the two disciplines mixed up, yet urban photography and street photography are two whole different things. Photographers working on the street focus solely on capturing candid moments involving human subjects. On the other hand, candid shots are not required for urban photography, and the subject matter of the photos does not have to be people.

How Do I Start Street Photography?

Which Is The Best Lens For Street Photography?

The 35mm lens is perhaps the lens that is utilized the most by street photographers, and the reason for this is because it provides a lot of benefits that are particularly useful in this fast-moving genre. It has a field of view that is sufficiently broad to permit the easy inclusion of many subjects within the frame, as well as a topic and a background.

Who Is The Best Street Photographer?

Henri Cartier-Bresson, a French photographer who was born in 1908 and died in 2004, is widely regarded as the most famous street photographer in history. He is famous for his candid photography and for his ability to capture the "decisive moment." The precise moment of action is the one that proves to be decisive.

The practice of photojournalism is not unethical in and of itself; nevertheless, taking pictures at the scene of an accident can bring up the question of whether or not it is ethical to do so. In a similar manner, the act of photographing people on the street does not in and of itself raise any ethical concerns.

Can A Photographer Use My Photos Without My Permission?

According to the laws on copyright, the photographer is the owner of the copyright and has the right to use the photograph for any editorial purpose, even without the agreement of the subject of the photograph.

Is Street Photography Legal In UK?

You are allowed to do so so long as you remain on public property. This means that you are permitted to snap photographs in public places, such as libraries, museums, and government buildings, as well as on the street and in other publicly accessible areas. If there is a specific law that prohibits such shooting, then the only time you won't be able to snap images is in that scenario.

If you live or work in a city, there are great places to take street photos right outside your door. You could follow the advice in this article about how to take a public shot.