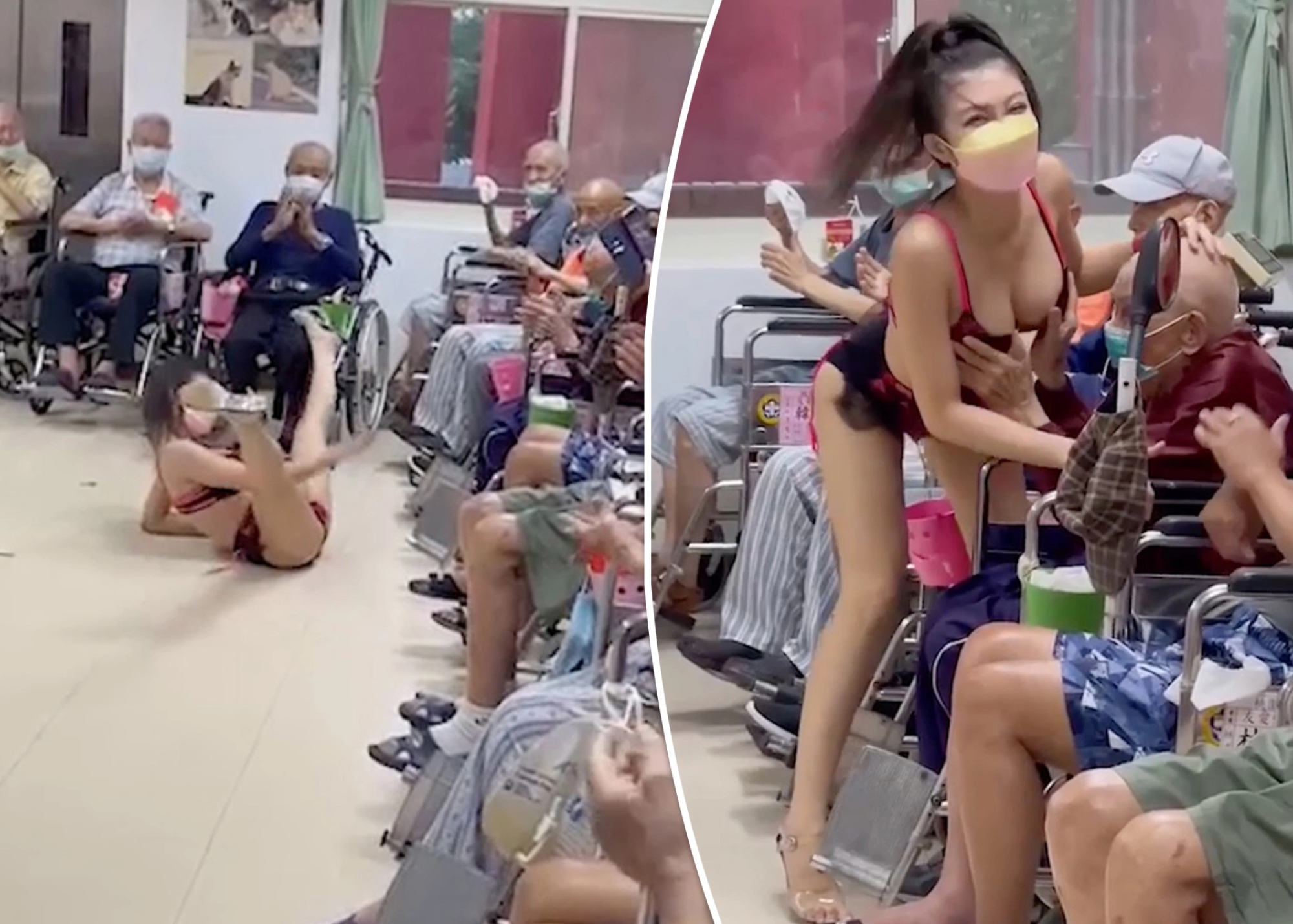 A stripper entertains elderly in Taiwan's Taoyuan Veterans Home and goes viral. The facility has since sent out an apology because they hired a stripper to entertain old people. The woman had been hired to provide entertainment for a group of 12 elderly people who used wheelchairs, according to the report.

The watcher filmed the event and shared the video online, where it quickly went viral. Video of the woman's obscene dance in the state-run facility for retired army personnel can be seen below.

At the beginning of the video, the adult performer lies down on the floor in front of an older person. Then, he or she straddles the air. Straddling means standing or sitting with one leg on each side of something.

Then she gets up and starts doing a lap dance on the resident, who was sitting in his wheelchair. Over the top of the music that is playing in the background, there is a cacophony of clapping and words of encouragement coming from the staff.

Just as the elderly man is about to squeeze the dancer's breasts, she starts bouncing up and down in front of him. This causes the crowd to burst out into laughter and cheers. After that, the exotic performer finished the lap dance by giving the elderly gentleman a kiss on the top of his head while he was laughing.

After the video clip went viral, the state-run facility for retired army personnel got a lot of negative attention and had to put out an apology statement.

Since then, hundreds of people have taken to Facebook to voice their opinions on the issue. The video uploaded on Facebook reached 15K reactions, 5.2K comments, and 781K views. Here are some of the comments found on Facebook:

So long as the nursing home paid her, who cares? Seniors won't always be satisfied by book readings and puppet shows. They aren't children. I'm sure anyone who didn't want to be there was allowed to opt out.

One comment poked a joke and said: "She could have caused them to have a heart attack or stroke. Hope their blood pressures were taken."

Another comment reads: "This Taiwanese nursing home clearly cares more about their veterans than the USA does."

Here is another user who agrees with the hired stripper to perform. Stephany Franco said: "Let these old people live their last freaking days of their lives. You know they aren't getting anyone pregnant."

Meanwhile, Drouin commented: "I don't see anyone upset in that crowd at all. Let people enjoy themselves. If their kids are upset, they shouldn't have shoved them in to homes."

Meanwhile, Alysson Musselman expresses her opinion about the viral video. She said:

The only apology I see that should happen is from whoever it was whining about the nursing home. They’re old, not dead. They still deserve to have fun if they are willing participants. $10 gets you everything you want in Vietnam.

On the other hand, one Twitter user voiced their support to the idea of employing a stripper to entertain elderly patients in a nursing home. This incident took place in Taiwan. The Twitter user posted:

"It's so weird to infantilize or project onto elders. I've seen so many videos of strippers performing for nursing homes who love it, try to mimic the moves, and have so much fun talking to and admiring the dancers. It's like any other act!"

The employees show their deepest regret over the incident, which took place just three days before the annual harvest festival that was held in the area on Monday. They explained that they wanted to brighten everyone's mood after the previous two Mid-Autumn Festival celebrations had to be canceled due to the pandemic.

The intention of the event was to entertain residents and make them happy. We are very sorry for the offense that was caused.

The nursing home's spokesman also said that the stripper was "too enthusiastic and fiery," and he added that the staff would be "more careful" in the future when planning events.

At a retirement home in Taiwan, the residents' spirits were lifted after a wild night that included bingo, karaoke, and strippers. People have come to the defense of the Taoyuan Veterans Home, which has been criticized for hiring a stripper to dance on the laps of elderly residents.

Although it was probably not the most appropriate place to get pulses racing, people have defended the Taoyuan Veterans Home. The comment reads: "This is stupid and ridiculous. How about treating them well and with dignity, respect and honor."