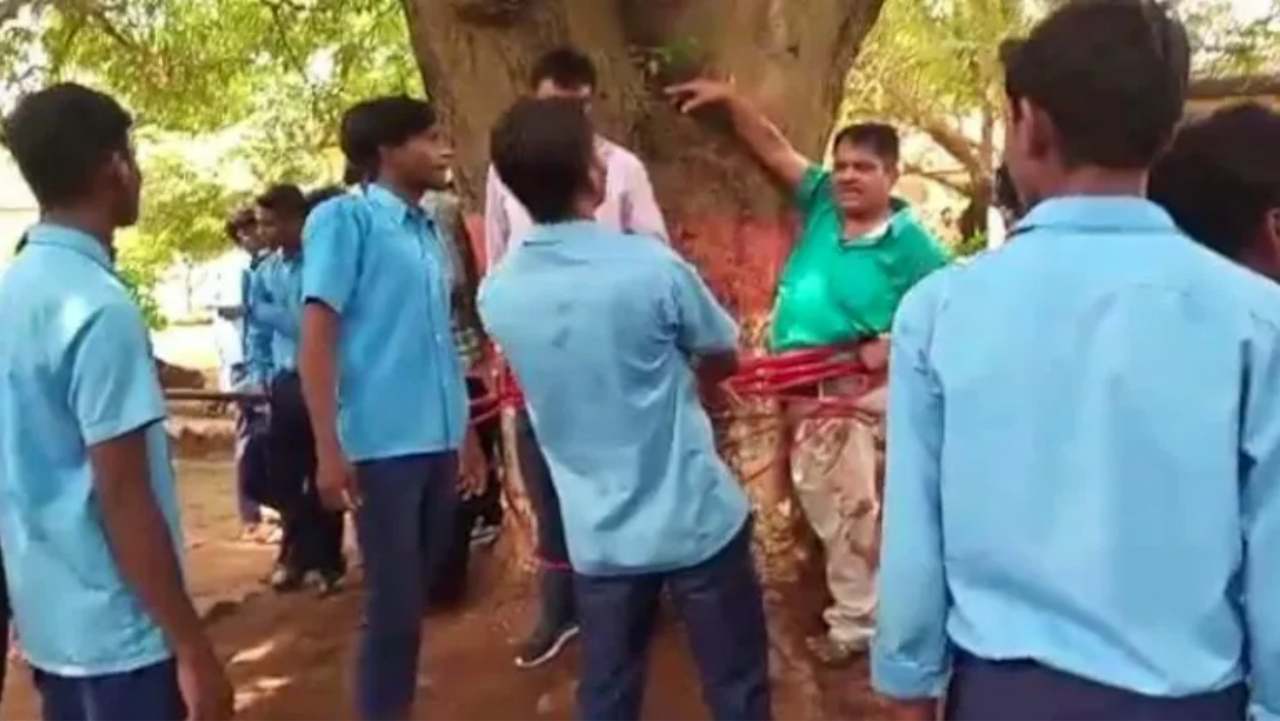 Students tie teachers to a tree and thrash them over poor marks in India. When did this happen? This happened on September 001, 2022.

In Dumka, Jharkhand, students at a government-run residential school for Scheduled Tribes (ST) allegedly beat two people, a math teacher and a clerk, after receiving low scores on a practical exam.

According to the police, 11 out of the school's 32 students received Grade-DD (double D), which is tantamount to failing, in the class 9 test, the results of which were released by the Jharkhand Academic Council (JAC) on Saturday.

The event, in which students tie teachers to a tree and thrash them over poor marks in India, at a school in the neighborhood of the Gopikandar police station.

Anant Jha, the block development officer (BDO) for Gopikandar, and Nityanand Bhokta, the in-charge of the Gopikandar police station, arrived at the school to investigate the event.

The children have claimed that they were purposefully given low grades, which caused 11 of them to fail the class 9 board exam. Eleven out of the 36 pupils that took the test failed it.

The principal allegedly declined the student's request to see their practical papers. When they went up to the clerk, he refused to look into their request.

According to the authorities, a First Information Report (FIR) has been filed against the headmaster and 11 students.

Teacher Suman Kumar and clerk Soneram Chaure complained that they were beaten up and tied to a tree on the instructions of the headmaster. An FIR has been registered against the headmaster and 11 students,

Students complained that their teachers had given them extremely few marks in practicals and that they had not been provided an explanation when Dumka education officers arrived at the scene after the issue was reported.

We received info on the incident and held talks with all teachers. When we reached there, students said that they were given very less marks in practicals and they didn't receive an adequate response from their teachers,

A teacher, Kumar Suman, responded to the situation by saying that pupils had called them pretending to hold a meeting and complained that their tests had been ruined.

Students called us on the pretext of holding a meeting and said their results were spoiled. It happened because their practical marks were not included in the results. That was to be done by the headmaster. So we couldn't have taken any step in this regard,

Students tie teachers to a tree and thrash them over poor marks in India. A chair was also broken during the altercation by the "angry" youngsters.