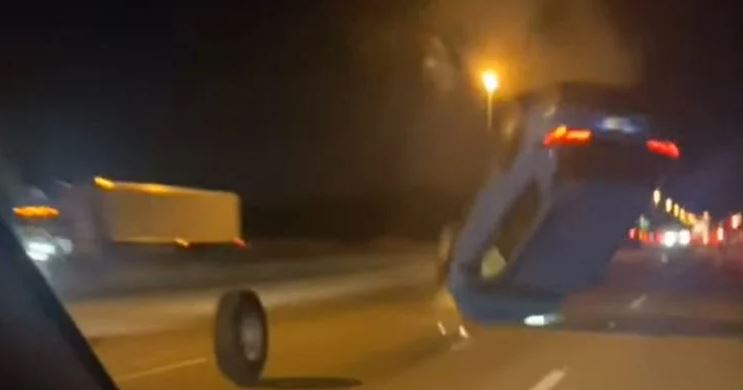 SUV flips over as it runs with a loose tire on the highway - Tire faults can result in serious traffic accidents, causing harm to both the tire owner and other motorists. A car flips over today as the RAV4 was launched into the air by the massive tire, which managed to execute a somersault before landing on the wheels thanks to the driver's luck. As a result, the driver of the car suffered no significant injuries.

MzDeanna Smith, who was traveling nearby at the time, captured the incident in Indiana. Her video was posted to her Facebook page. The tire bounces off the truck in front of it and rolls down the highway. The Toyota collides with it almost immediately after that. As can be seen in the video, the car's driver had no time to react when an unanticipated impediment appeared.

A Reddit user also posted the tire accidents video of the Toyota crossover that was unfortunate enough to come upon a truck tire that had been lost. Watch the video below!

According to MzDeanna, the driver stepped out of the vehicle on her own and merely complained of neck ache. Nonetheless, she called 911 and she assisted the driver in any way she could. Following the video's release, several viewers inquired if she was still healthy and had experienced any issues. The driver phoned MzDeanna Smith after a few days and assured her that she is fine.

Since the video is posted on Reddit, it has captured the attention of a lot of users. Letäs hear what they have to say.

RealitzCheck18: Only the SUV flipped and the tire is still going.

A certain user named cupcake_thievery commented, "Wasn't there a movie like this with a tire that like killed everybody?" to which another user named Kwirt replied, "Rubber. It also fell in love with a human girl after it killed everyone. I wasn't stoned enough the first time I watched that movie. 'A homicidal car tire, discovering it has destructive psionic power, sets its sights on a desert town once a mysterious woman becomes its obsession'."

A vehicle tire that separates from the vehicle is a potentially fatal projectile that requires a rapid response from anybody in its path. When a tire separates on a highway, the approaching wheel's speed and the speed of a car traveling in the opposite direction leave the driver with very little time to react to the deadly scenario. Drivers can occasionally escape a runaway wheel and other times they cannot.

When a car's tire blows out, the driver may lose control and the vehicle may even tip over. This is particularly common in trucks and SUVs, which are taller vehicles that are already at a higher danger of rolling over. There is a risk of injury to a large number of people on the road in various conditions, including the following:

Who Is Responsible For A Crush Caused By A Tire Separation?

When a tire blows out and causes damage or death, an extensive inquiry is usually required to ascertain who is to blame. When narrowing down the parties accountable for the crash-causing loose wheel, the following considerations should be considered:

What Does It Mean When Your Car Bounces?

When braking or driving over bumps, an automobile usually bounces up and down. It means the shocks/struts or steering/suspension system are broken.

What Makes Your Car Bounce Up And Down?

Why Does My Car Feel Wobbly On The Highway?

How Many Accidents Aare Caused By Tires?

According to the National Highway Traffic Safety Administration, poor tires cause around 11,000 accidents each year (NHTSA). Furthermore, two of the most prevalent causes of car collisions are hazardous driving conditions caused by cold weather and driving on worn tires.

The driver of the SUV that flips over as it runs with a loose tire on the highway only feels a little discomfort after the incident. She also expressed gratitude for the assistance that Smith had offered. Only the legal consequence of this situation is unknown, as is whether or not the truck driver was at fault. In any scenario, the insurance company will almost certainly be responsible for the vehicle repairs.