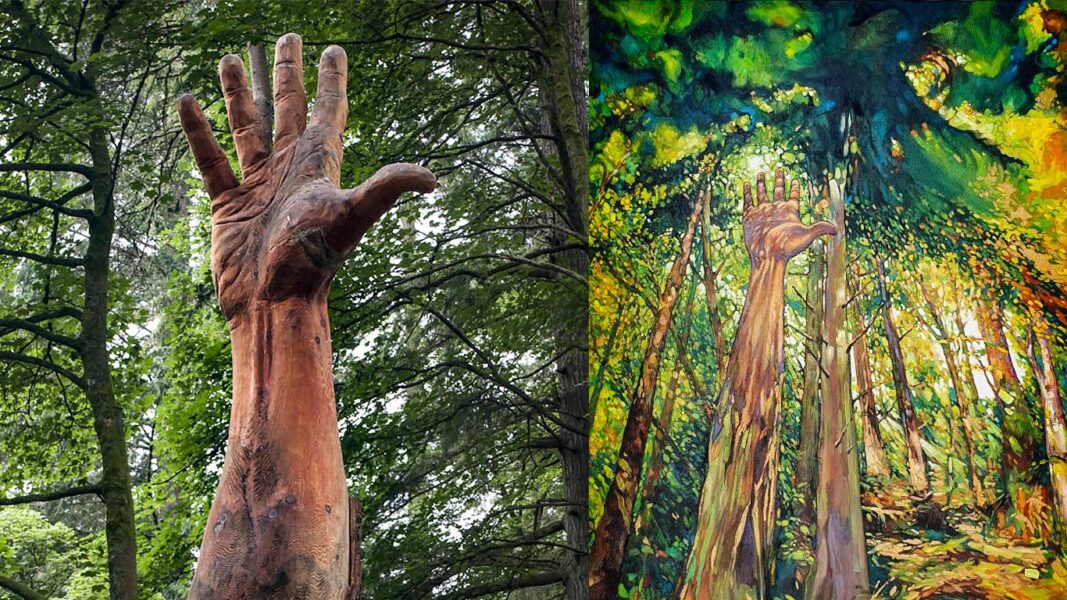 After a storm injured the tallest tree in Wales, it was scheduled to be chopped down. Instead, chainsaw artist Simon O'Rourke came up with a better solution to portray the tree's final struggle to reach the sky. This tallest tree of wales carved into a giant hand by Simon O’Rourke is the best example of 'Best out of Waste'. 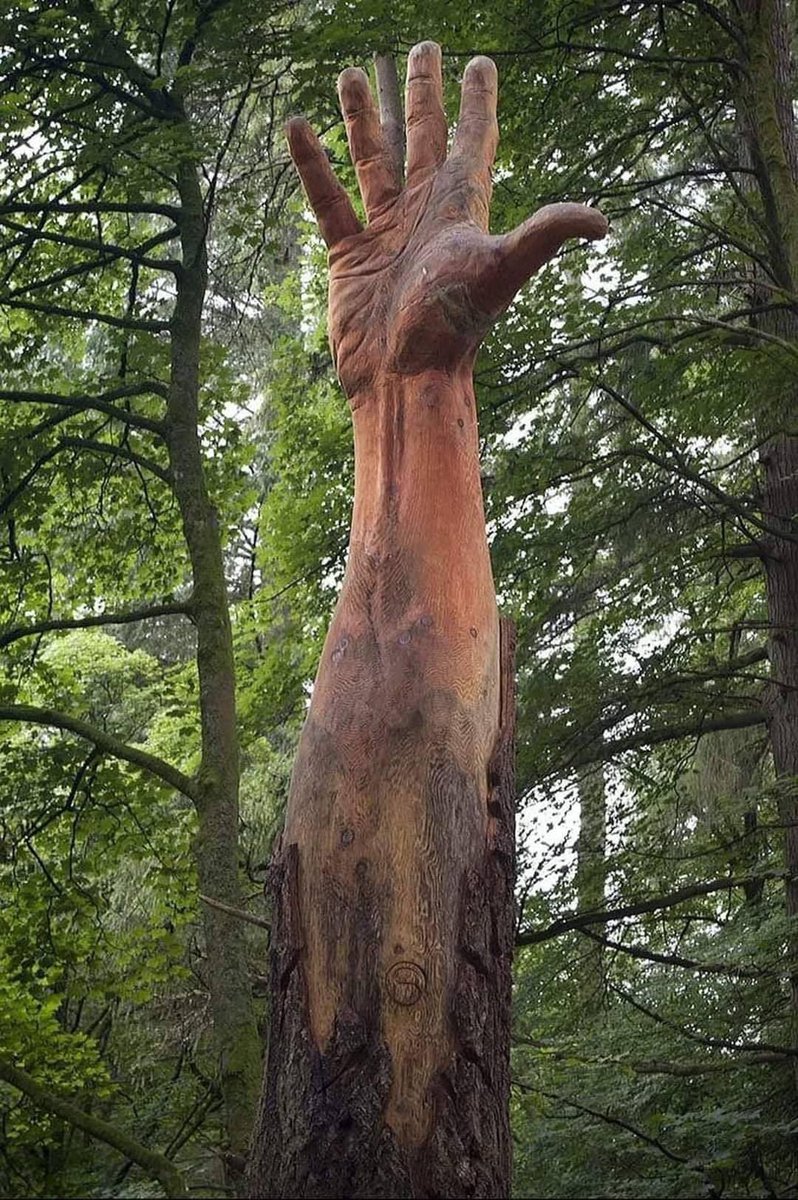 Dimensions Of Largest Tree Of Wales

After the 124-year-old Douglas Fir was felled on the Lake Vyrnwy estate in Powys in March, the only thing left standing was a 15.2m (50ft) stump, which was the only thing left standing. It formerly stood at 63.7m (209ft), making it taller than a 20-story building and considered to be the joint-tallest structure in the United Kingdom. The enormous hand reaches 2 meters in length from wrist to fingertip (7ft).

Wrexham artist Simon O'Rourke, 33, carved the top of the stump with a chainsaw and based the artwork on his own hand, according to the artist's website. His carved hand out of hand project is really wonderful.

Mr. O'Rourke, who has been carving trees for nine years, owns a total of 12 distinct chainsaws in his collection.

In the past, he has created carvings of a swan, an angel, a kingfisher, a chipmunk, and a big clock, amongst other subjects. Earlier this year, the Forestry Commission became aware of damage to the tree, and they were concerned that it would pose a danger to park visitors. In addition to the tree's tilting to one side, there were two large cracks on opposing sides of the main stem that ran up to 3.5m in length and ran from the buttress roots to the top of the main stem.

When it was first measured, a tree surgeon ascended the tree's branches and strung a length of rope up to the summit, which was then measured. In order to determine the height on the ground, they used the Tree Register of The British Isles, which supported their findings. 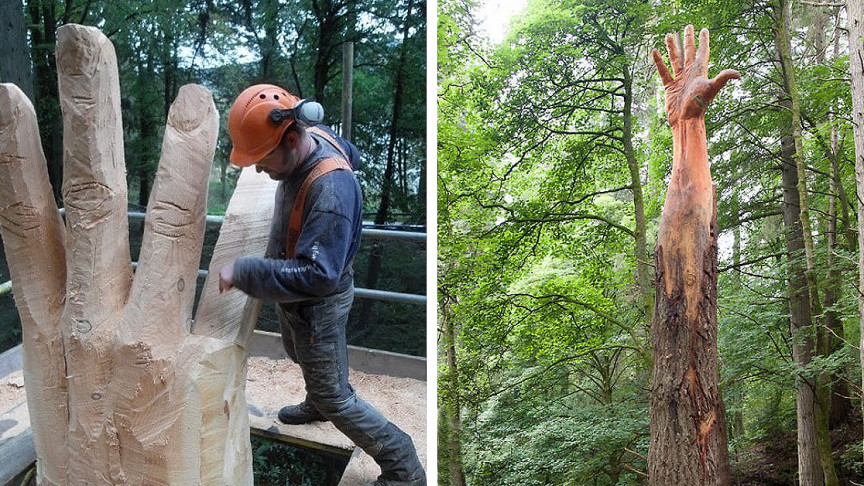 Simon has to say about his piece of the 'tallest tree of wales carved into a giant hand by Simon O’Rourke'.

"I found out through a friend that the tallest tree in Wales had been storm damaged and was due to be felled, and that Natural Resource Wales who were in charge of the site, were going to commission an artist to carve the tree."

"I searched the internet for the right person to talk to, and on finding them, I got permission to submit a design!"

"I was really excited at the prospect of carving this giant and creating a memorial for such a well known landmark!"

"I began researching the area and found the area of woodland that contained the tree was known as the Giants of Vyrnwy. This got me thinking and I decided on a giant hand, symbolising the giants, and the tree’s last attempt to reach for the sky!"

"My designs were chosen and I immediately got to work planning. Scaffold was needed to make it safe to work on, and the terrain was such a difficult one that it took two days to erect the scaffold! Six days of intense work followed using chainsaws and grinders. I needed to add two pieces for the thumb and little finger, as the tree wasn’t wide enough to form the whole hand. After completion, the sculpture was coated in Tung Oil, a natural plant based oil safe for proximity to waterways."

"The client was really pleased with the result and said that it was a fitting reminder of the tree."

"I loved working on the hand sculpture, it reminded me just how small we are compared to some of the living organisms on this planet! All in all, a humbling experience!"

Where Is Simon O'Rourke From?

What exactly is he? His name is Simon O'Rourke, and he is a visual artist based in North Wales. His beautiful pieces of artwork are created out of discarded lumber or standing stumps, and he uses a mixture of power and hand tools to complete them. Traditional sculptures of the human and animal forms, abstract work, and the recreation of logos in wood are all included in this collection.

People on Reddit are really loving and appreciating the effort.

"I've always found it easier to sculpt hands and faces than it is to draw them, cause I see them every day, and things like butts and thighs and abs (which much of the population covers in their daily lives) are tougher to shape by sight than they are to draw by feel but that's just me, I guess there's just... something... about sculpture, the best way I can describe it is that compared to drawing, which has to come from your head, the sculpture already exists in things like wood and stone and even foam and clay, its just asking to be released into a final form of some sort which is why dimensional lumber always kinda bumms me out."

"This is incredible work"

"brilliant! because when I hear Wales I immediately think palm trees"

This tallest tree of wales carved into a giant hand by Simon O’Rourke is the best example that something is only wasted till you notice it. There are a lot of examples like this- people, instead of giving up, converted that thing into completely new stuff. And that is really wonderful!