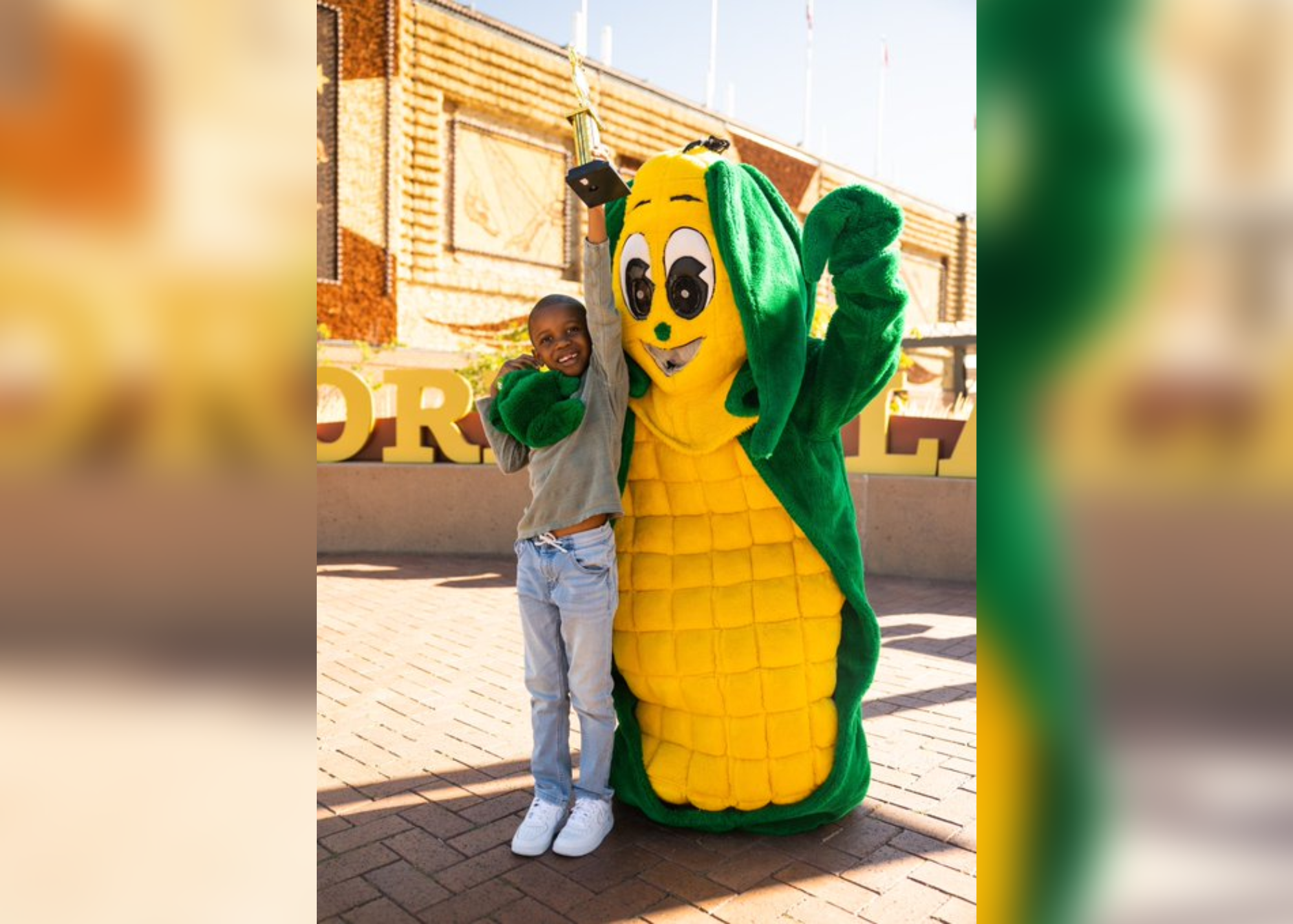 Tariq alias corn-kid is a South Dakota "corn-bassador." He is a black young man who loves corn so much that he went viral when he talked about it. In honor of Tariq's passion for the essential crop, South Dakota Governor Kristi Noem has declared September 3, 2022 as "Official Corn-bassador Tariq Day." The executive proclamation was shared on social media and was posted by the governor's office.

On Saturday, Tariq, whose last name was withheld out of respect for his family's privacy, was greeted by attendees at the Corn Palace in South Dakota. Governor Kristi Noem's twitter posts captioned: "The Corn Kid came to South Dakota’s very own @Corn_Palace!!! Welcome to South Dakota Tariq, our official Corn-bassador! Eat lots of corn." 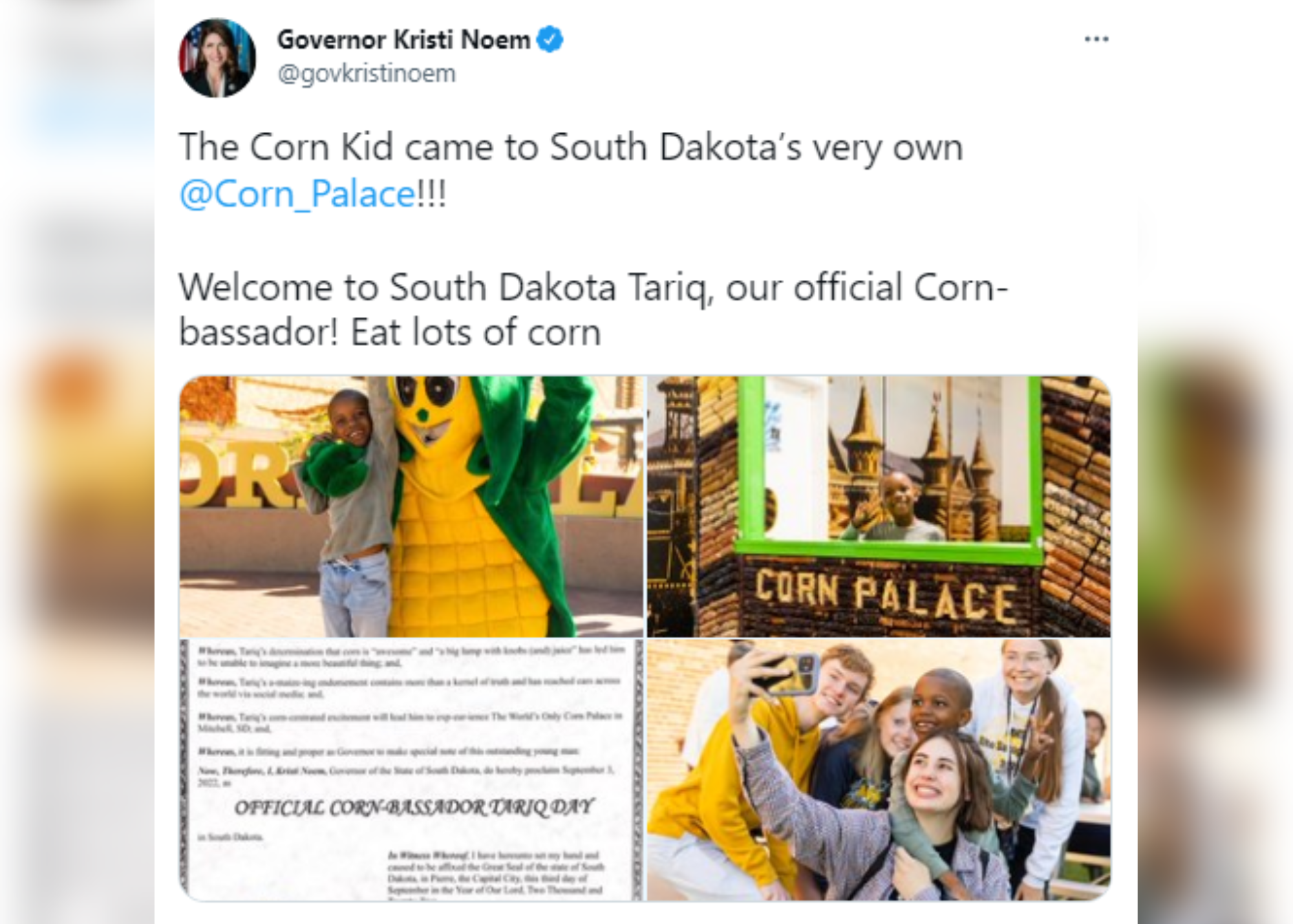 A highlight reel of Tariq meeting a corn mascot at the Corn Palace was shared on South Dakota's official TikTok account. After he was interviewed on the YouTube channel Recess Therapy last month, 7-year-old Tariq became the subject of memes, grand ballads, and other videos.

Tariq said in the minute and a half clip that his favorite food is corn and that he enjoys playing "a variety of games," such as hide and seek. In the video, he says, "I mean, look at this," while holding up his buttered ear of corn. "I can't imagine a more beautiful thing!"

Tariq has been keeping busy with his new job as South Dakota's Corn-bassador and by signing up for Cameo, an app that lets fans pay celebrities for individual shout-outs. In addition to appearing in a TikTok with YouTube megastar Mr. Beast, Tariq recently made a cameo video for the Nebraska Huskers, in which he wished the team a "corn-tastic season."

The seven-year-old was asked in the video, which has currently received over 4.2 million views, what particular aspect of the corn at his local fair he liked.

Tariq's raw video about his love for corn elicited a flood of positive feedback from viewers. They express how Tariq brightened their day and how watching him melted their hearts. Here are a few of the 3.8K comments found in the video's comment section:

"All it took was a young man talking about corn to bring millions of people together to laugh. The corn kid is a national treasure he must be protected at all costs."

"As a literal corn farmer from northeast Kansas, this little guy is my new best friend."

"Ever since I was told that corn was real is so great, like it was a mythical legend in his mind for a while before it turned out to be a real thing."

Omg I can't with this kid. He's so adorable. He looks like he's 6 years old and he literally knows what a PUN is. And using words like variety, etc, and the fact that he said "Not everyone had to like it, just try a bite! Just shows how great of a kid he is. Wishing for an endless supply of corn for this little man.

Finally, a user mentioned in the comments:

"I cried when watching this because I know I’ll never have a son like this (or a son ever). This kid, talking about a bloody vegetable, has such a wholesome, mature and sweet nature about him. Innocence is beautiful, and must be protected at all costs."

Meanwhile, a song that was produced by the music creator Shmoyoho and features Tariq's corn monologue has racked up 69.3 million views and has been featured in more than 705,000 TikTok videos.