The AquaDom Explosion Turns The Radisson Into A 'War Zone' 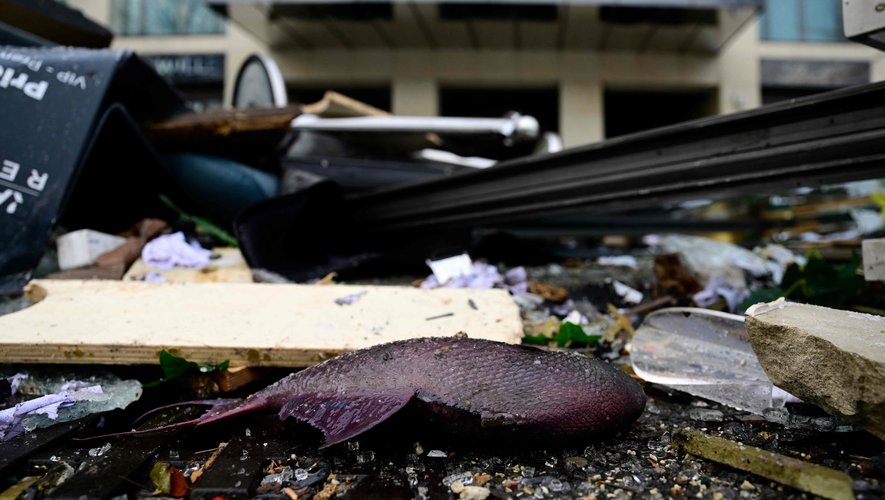 The Aquadom explosion turns the Radisson into a "war zone." A German lawmaker staying at the hotel said this after being woken up by a loud noise and thinking it might be an earthquake. Aquadom is a famous aquarium with a million liters of water that is in the lobby of the Radisson Blu hotel in Berlin.

There are shards (of glass) everywhere. The furniture, everything has been flooded with water. It looks a bit like a war zone.

- Sandra Weeser, a German lawmaker who was staying in the hotel

According to the police, the damaged businesses included a Lindt chocolate store, several restaurants, and an underground parking lot next to the hotel. A fire department official said that building safety experts are looking at how much damage there is to the hotel.

The Aquadom is a huge aquarium that houses 1,500 fish. This aquarium is 15.85 meters (52 feet) tall and has been called the world's largest free-standing cylindrical aquarium.

Photos show huge pieces of broken glass all over the lobby of the hotel, and people who were there said they first thought a bomb had gone off when they heard loud bangs before 6 a.m. when it exploded. A representative from the Berlin fire department said that the amount of debris thrown out during the event made it impossible for emergency workers to reach the bottom level. Search and rescue dogs were sent to the area.

Two people were hurt by glass shards, the Berlin Police said on Twitter. Meanwhile, the German public and the state-owned international broadcasting agency reported that all 400 people who were staying at the Radisson hotel have been moved to another hotel in Berlin, where they are waiting to be picked up. The police say they are looking into what happened, but it is thought that the recent cold weather could have caused the tank to break.

The aquarium of the AquaDom Berlin which is located in the Radisson Collection hotel, Berlin, collapsed. As far as we know to date, no guests were injured and together with the authorities we are looking into the cause of the incident. We have immediately closed the hotel until further notice and are relocating guests.

The aquarium was last modified in 2020. One of the best parts of the place was the 10-minute elevator ride through the tropical tank.

On the other hand, PETA, an animal rights organization, stated on Thursday that the aquarium has become a sanctuary and a "death trap" for the fish that live there. They said:

This man-made tragedy shows that aquariums are not a safe place for fish and other marine life.

One of the visitors was shocked about the incident. Iva Yudinski, an Israeli tourist who was staying at the hotel, was shocked by what happened.

Just yesterday we watched it and we were so amazed (by) its beauty. [But] suddenly it’s all gone. Everything is a mess, a total mess.

Some of the YouTube users expressed their sorrow over the loss of numerous fish as a result of the explosion. One comment said:

Thoughts and prayers to all the fish families who lost loved ones in this horrible tragedy in fish history.

Someone else said: "RIP to all the fish we lost." On the other hand, another user mentioned:

RIP to the fish but I wanna see the security video of the actual burst please. I find it hard to believe there was not a single security camera facing the AquaDom?!

If you love aquatic animals, visiting the world's largest aquariums should go on your bucket list. Some of the aquariums on the list below are as big as buildings. They are home to a lot of fish and other sea creatures you might not have seen before.

The largest aquarium in the world is the Chimelong Ocean Kingdom. It can hold up to 12.9 million gallons of water. It also has the biggest tank, with a capacity of 5.99 million gallons. Four whale sharks, a lot of manta rays, sea turtles, different kinds of sharks, and tropical corals live here.

The whale shark exhibit, which has the largest acrylic panel in the world, is the most famous part of the aquarium. Its length is more than 129 feet. Every year, millions of tourists and people who like marine life come to this place to see the animals that live in the water.

On Sentosa Island in Singapore sits the South-East Asia Aquarium, which is the world's second-largest. Its tank holds 4.8 million gallons of water, for a total capacity of 12 million gallons. The gigantic oceanic manta ray can grow up to 23 feet in length.

Valencia, Spain, is home to the Maui Ocean Center. It can hold a total of 11 million gallons of water, and its largest tank can hold 1.8 million gallons. It is best known for its 35-meter underwater tunnel, which takes visitors from the cool waters of the Pacific and Atlantic Oceans to the warmer waters of the Indian and Caribbean Oceans. In this aquarium, you can see walruses, beluga whales, dolphins, seals, sea lions, penguins, and many other types of aquatic animals.

The video below will take you to the largest aquariums in the world!

LARGEST Aquariums In The World!

Who Built AquaDom In Berlin?

On December 2, 2003, AquaDom opened. It cost about 12.8 million euros. International Concept Management, Inc. made the acrylic cylinder with panels made by Reynolds Polymer Technology. Sergei Tchoban did the architectural drawings.

Why Did The Berlin Aquarium Explode?

Freezing conditions of negative 10 degrees Celsius (14 degrees Fahrenheit) overnight may have produced a crack in the acrylic glass tank, which then detonated under the weight of the water. According to the police, there was no proof of a malicious act.

Did The Fish Survive Berlin?

According to the Berlin Fire Department, some of the fish survived in puddles caused by the devastation of the 1 million liter tank (264,000 gallons). The Fire Department claimed on Twitter that "a few dozen" people were recovered alive in the tank's wreckage.

What Fish Were In The Berlin Aquarium?

The fire service said that they are still looking into what caused the explosion in the aquarium. Reporters were told by police that there is no proof that the attack was planned. The company that runs AquaDom, Sea Life, said on its website that after the explosion, a separate aquarium inside the hotel was shut down.