The Environmental Review: Why You Should Care About Coral Bleaching

In part one of our Environmental Review, a recurring feature on the pressing environmental issues of our time, we look at coral bleaching, which is devastating our planet’s most beautiful reefs.

Yes hello it’s me, the writer who asked for the Planet Earth and Blue Planet DVD boxsets for her 8th birthday; here to tell you about coral bleaching. The fact I am sat here writing this article whilst wearing a coral conservation t-shirt might give you some indication as to how into this I am.

Those of you who didn’t go through a seven year long marine biology phase as a child may not be aware of what exactly coral bleaching is, and that’s perfectly alright. It’s a symptom of contemporary global warming; a phenomenon that’s not often discussed in comparison with issues like single-use plastic pollution and over fishing.

However, it is a process that will become more common the more unstable our climate becomes.

First off, what even is coral?

Coral itself is a sessile animal. And yes I will explain the last two words of that sentence. Sessile just means they are attached to the ocean floor permanently, like plants are on land. But coral is absolutely not a plant! They’re animals, because they don’t make their own food.

Remember from your year 8 science classes learning about photosynthesis, the process through which plants feed themselves? Corals can’t do that. Much like we do, they use their tentacle-like arms to pick up food and shove it into their mouths.

What we recognise as coral reefs are structures made from hundreds to sometimes thousands of creatures called ‘polyps’. FYI: If you decide to Google ‘polyps’ please type in ‘coral polyps’ instead. The former is also an abnormal tissue growth, and there are some pretty gnarly results in the image section.

Polyps secrete calcium carbonate which forms a hard exoskeleton, allowing it to attach itself to rock or the skeletons of other dead polyps. Lots and lots of polyps join together to form huge living organisms; the very recognisable image of coral reefs, like the one below:

Okay I know what coral is now, what about coral bleaching?

Coral bleaching occurs when water becomes too warm (or too cold), and corals expel the algae that live in their tissues. The loss of this zooxanthellae (fancy name for the algae) is what causes the transformation from colourful to white. When coral bleaches, it does not necessarily mean it is dead. They can survive being bleached, but they are under increased stress and therefore more likely to die.

In 2005, half of all coral reefs found in U.S. waters were lost due to a mass bleaching. Warm water centralised around Puerto Rico and the Virgin Islands spread southward through the Antilles. When satellite data from all 20 years prior was compared, scientists discovered the thermal stress from the 2005 event was greater than the previous 20 years combined.

However, not all coral bleaching arises as a result of warmer waters.

It can occur when ocean temperatures become too cold, like in the Florida Keys of January 2010: 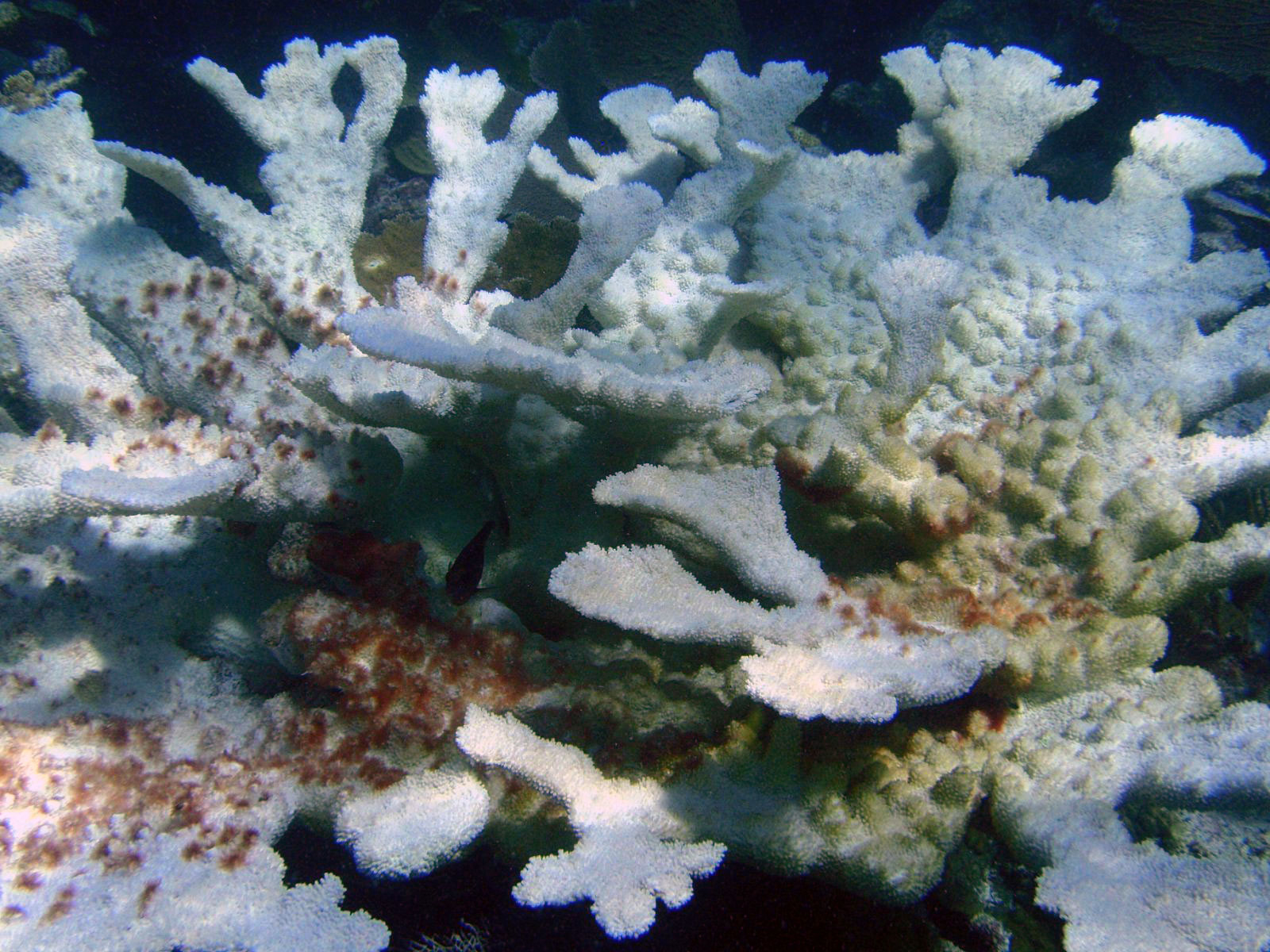 This bleaching event occurred when temperatures fell 6.7 degrees Celsius lower than normal for the time of year. 66% of coral from Key Biscayne to Fort Lauderdale were dead; or had at least diminished to less than half living tissue.

Why should you care?

As I mentioned previously, the more unstable our climate becomes, the more likely we are to see dead or dying coral like this. The only viable solution to preventing coral bleaching and further loss of beautiful reefs is to maintain a steady and healthy global temperature. Even an increase of 1 degree Celsius can result in bleaching, as corals are notoriously temperamental.

Reefs are among some of the most vital foundations for ecosystems we have on earth. Providing shelter and a support system for millions of marine animals globally, who would simply not survive without coral. If more reefs are rendered dead or dying due to coral bleaching, ecosystems will collapse, and species will become increasingly at risk of extinction (if they aren’t already).

Reefs are beautiful, and it’s no surprise that thousands of people travel abroad every year especially to see them. To places now reliant upon reef tourism, the loss of corals means the loss of business, and with that, everything else.

Coral reefs keep coastal communities safe, acting as natural buffers that absorb strong waves and tidal storm surges. Without them, the safety, livelihoods, and food source of millions worldwide cannot be guaranteed. Expensive man-made seawalls are all well and good as a last resort, but are less effective than reefs and highly damaging to the environment.

If coral dies, then micro-organisms and larger creatures that rely on them, without any environment to spawn and develop, will die too. This disruption to the food chain starts low down, but eventually will impact those higher up. Those from vulnerable coastal communities who are dependent upon fishing as their livelihood will be worst effected.

Oh Sophie this is so disheartening, please stop typing now.

No! We have time for just a couple more harrowing statistics!

In 2017, the United Nations Environment Programme reported that bleaching on the Great Barrier Reef killed anywhere from 29-50% of the coral. A catastrophe of this scale was unprecedented at the time. The UNEP also found that between 1980 and 2016, the average amount of time between bleaching events halved. This in indicative of a trend wherein increasingly warmer summers and cooler winters coincide with greater destruction to our natural world. Whether it be more frequent natural disasters, desertification (I might write an article on this too), or coral bleaching.

Can anything be done?

Yes! As miserable as this all is there are things that can be done. Clearly you’re not out at a reef every night killing corals under the cover of darkness. You don’t know why this is happening and what you as an individual have done to cause it. You could try avoiding the use of herbicides or pesticides? Which I suppose would be a viable individual step to take if you were a farmer, which I’m assuming you’re not (so sorry to any farmers reading this.)

The one thing we can do that will guarantee the survival of corals is combat climate change. Yes it’s as simple as that. This requires change at a global scale, immediately. The reduction of emissions is the primary culprit, which we all do contribute to. But it’s producers and the governments that allow continued global emission rates to climb that are at fault. Steering communities and states towards use of renewable energy and governments towards concrete sustainable development aims is key.

We can still save corals, but sadly we are running out of time.

Aside from being a journalism and politics whizz, Sophie Kimberley also has fantastic hair, perhaps one of maybe three things she's got going for her. Aside from writing for The Hook, Sophie can be found photographing any animal that stays still long enough, wearing hideous floral printed shirts, tending to her nine houseplants, and suffering at the antics of Arsenal FC. You can contact Sophie at contact@thehooksite.com