The PlayStation 5 Will Be 100-Times Faster Than The PS4

The PlayStation 5 is set to be 100-times faster than the current PS4, as revealed by Sony.

Better go catch it then, right? Right, fellas?! Ha ha ha ha I am a riot. How do I do it? Incredible.

Anyway, the PlayStation 5 is on the way and the more we hear about it, the more amazing it sounds. The latest detail is that it’s going to be pretty speedy, and that sounds pretty great.

I’ll be honest, I’m not sure if I’m going to get myself the new PlayStation when it comes out, but if I do, I want to know that if I want to buy a game, it won’t take three hours to download even if I have the disk.

It makes no sense. What is the point in buying a physical version of the game if you have to wait just the same amount of time to download it as you would if you bought it on the PSN Store?

That’s enough from me though, as an official Sony document has stated that the upcoming console will “revolutionise the game experience for users“. 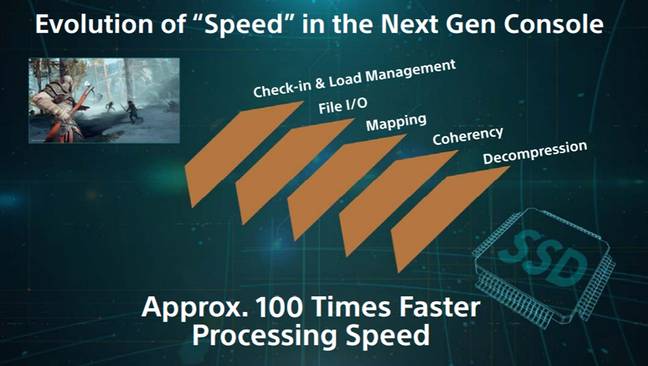 Sony CEO Kenichiro Yoshida said that the console’s custom-built SSD (solid state drive) will allow processing speeds up to 100-times-faster than those on the PlayStation 4.

“In order to further enhance the sense of immersion in games, we expect to improve not just the resolution, but the speed of games,” the document reads.

“For example, through a custom‐designed high‐speed SSD, we plan to realise game data processing speeds that are approximately 100 times faster than PS4. Game load times should be much shorter, and players should be able to move through immense game worlds in almost an instant“.

Basically, all of this equates to much shorter waiting and loading times, which means a smoother-running game. It also means that developers will be able to create bigger and more expansive maps, which is more good news for you.

It’s all sounding very lovely, and allegedly the Sony PlayStation 5 reveal party is happening next month in June, so we can know more about it then.