The World's Most Renowned Movie Set Locations In 2022 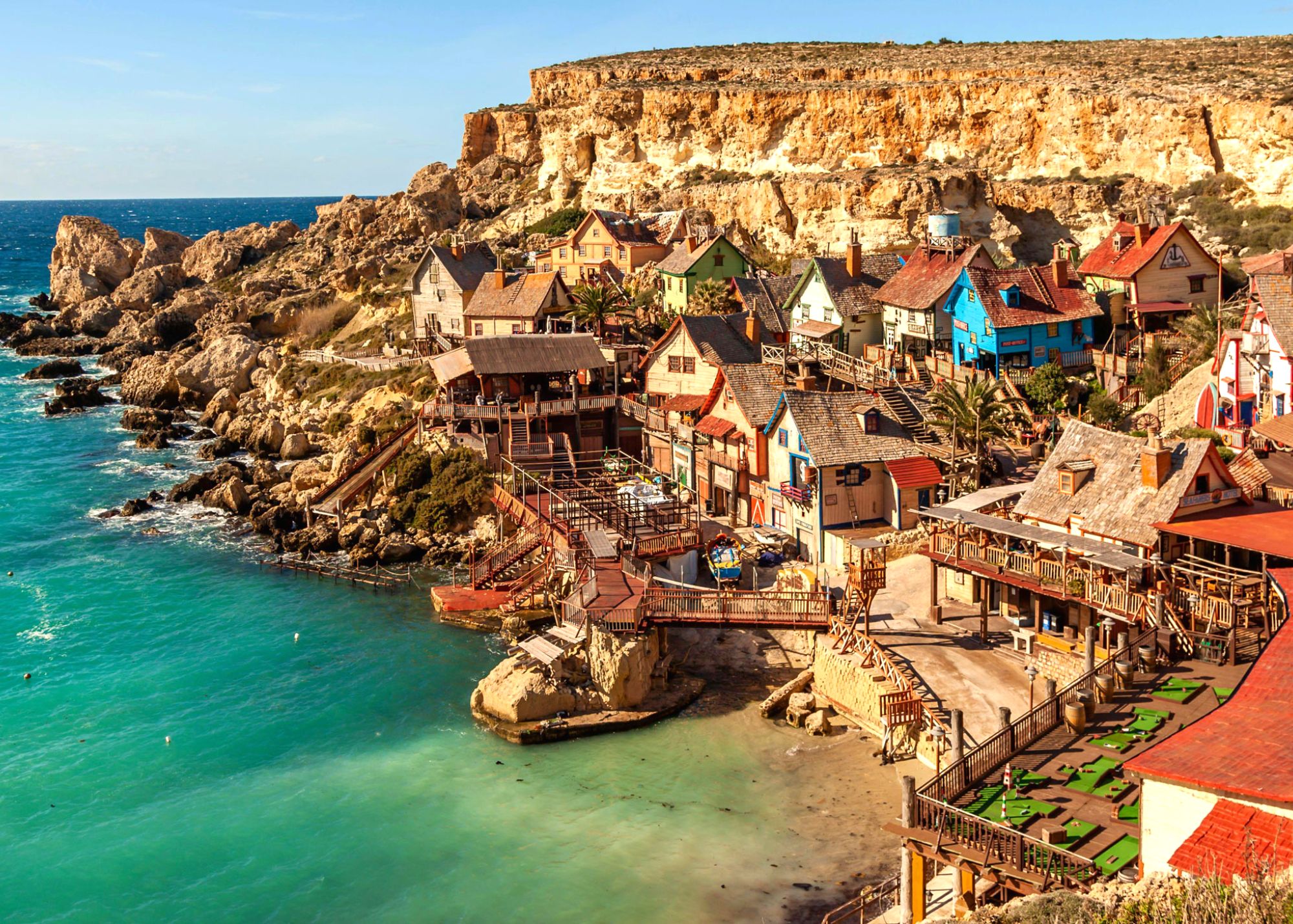 Do you have a favorite location featured in a particular movie that you tell yourself, "I want to travel there one day!"?

If so, you will surely enjoy reading about the world's most renowned movie set locations in 2022 featured in this article.

On the other hand, you may wonder: Is it safe to travel now?

We are happy to announce that these movie set locations are safe to visit this year.

Thanks to advanced technology, you can now travel to the settings of your favorite films and TV shows.

Many people can't wait to experience the real cultures of the cities, towns, regions, and islands that helped make the movie a hit.

So, keep reading to find out which of the most well-known filming locations you can actually visit in the year 2022. 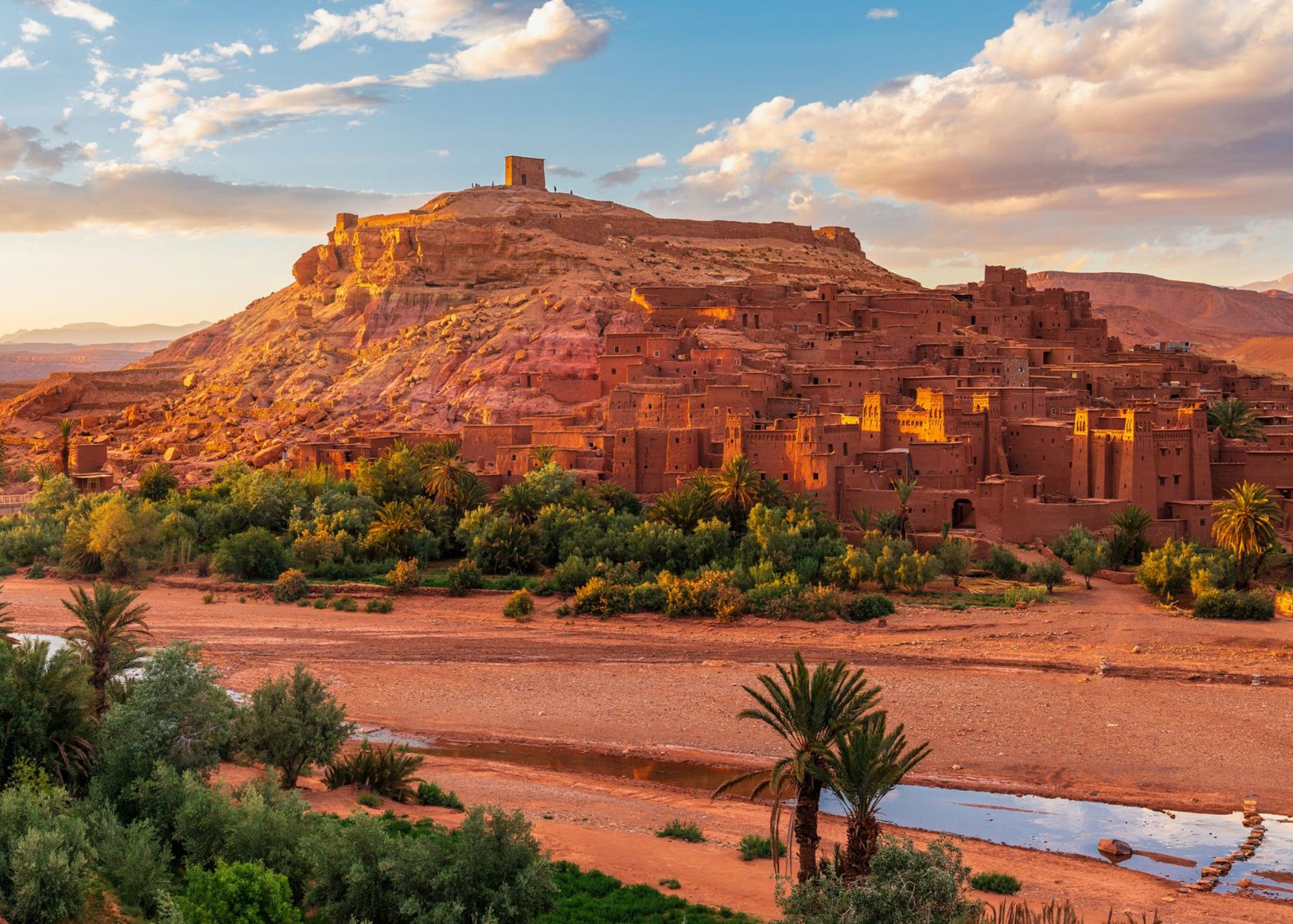 If you have finished watching Game of Thrones, you should take note of the place shown in the picture that is located above this paragraph.

Ait-Ben-Haddou is the name of this filming site, and it can be found on the foothills on the southern slopes of the High Atlas in the Province of Ouarzazate in the country of Morocco.

Since 1987, the picturesque walled village of Ait-Ben-Haddou in Morocco has been recognized by UNESCO as a World Heritage Site.

The construction of the small town occurred roughly a thousand years ago, and at that time it served as an important stop along the caravan route.

Ait-Ben-Haddou is currently one of the most popular tourist destinations in Morocco and is usually considered to be the most exciting stopover along circuitous routes around the country.

This village in Ouarzazate has already been used as a film set for a number of well-known movies due to the extraordinary atmosphere and one-of-a-kind architecture that the site possesses.

Some of the most famousfilms were Gladiator, Game of Thrones, Asterix and Obelix, Aladdin, Prince of Persia, the Mummie, The Hills Have Eyes II, Babel, Alexander, and Lawrence of Arabia.

The picture below is Ait-Ben-Haddou's village showed from the movie "Game of Thrones."

Yes, a trip to this charming village is well worth the time, and as a result, every tourist in Morocco ought to have experienced the largest Kasbah found within the nation. 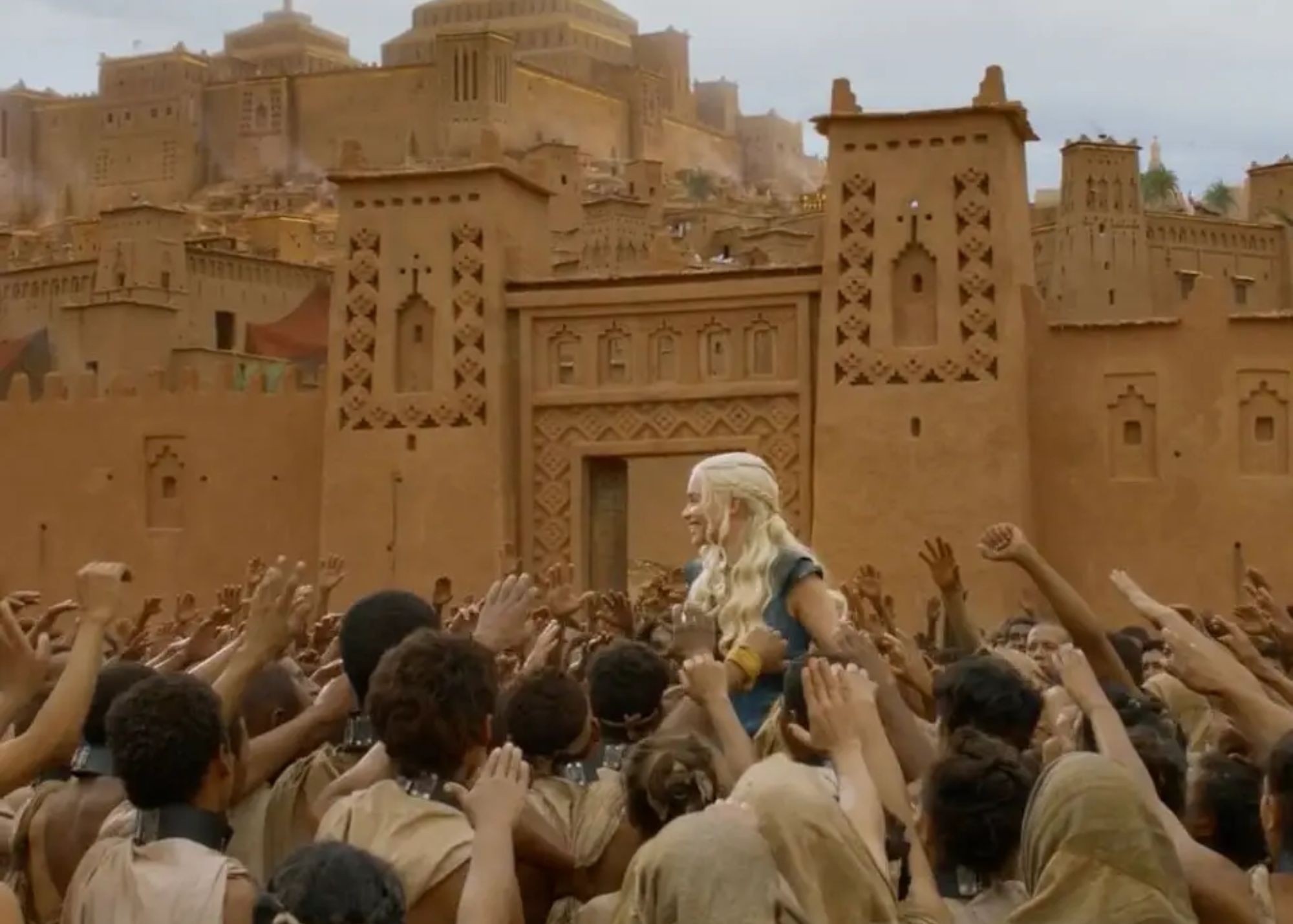 A picture shows the scene in "Game of Thrones," where Daenerys Targaryen conquers the city of Yunkai

How To Get From Marrakech To Ait-Ben-Haddou

Ait-Ben-Haddou is about 180 km southeast of Marrakech. You can rent a car or go on a guided tour to get there.

You can fly into the airport in Ouarzazate or drive through the Atlas Mountains from Marrakech to get to Ait Ben Haddou.

If you want to fly, Royal Air Maroc has direct flights from Marrakech.

Flights can cost as little as $29 (USD) and take about 40 minutes. The prices vary.

If you go by car, it will take about four hours to get from Marrakech to Ait Ben Haddou.

Be aware that the road from Marrakech to Ait Ben Haddou goes through the Atlas Mountains and is long, winding, and only has two lanes.

The tours will leave early in the morning and come back late in the day.

Ait-Ben-Haddou Tourism official page published a reminder when visiting this place where they said:

Traveling to Morocco is possible. After a six-month ban on sightseeing, we are ready to travel. Although the land and sea border with Spain is still closed, we can travel from Spain by plane, always complying with the regulations of the Moroccan authorities. But to prevent COVID-19, we must comply with a series of protocols and requirements. 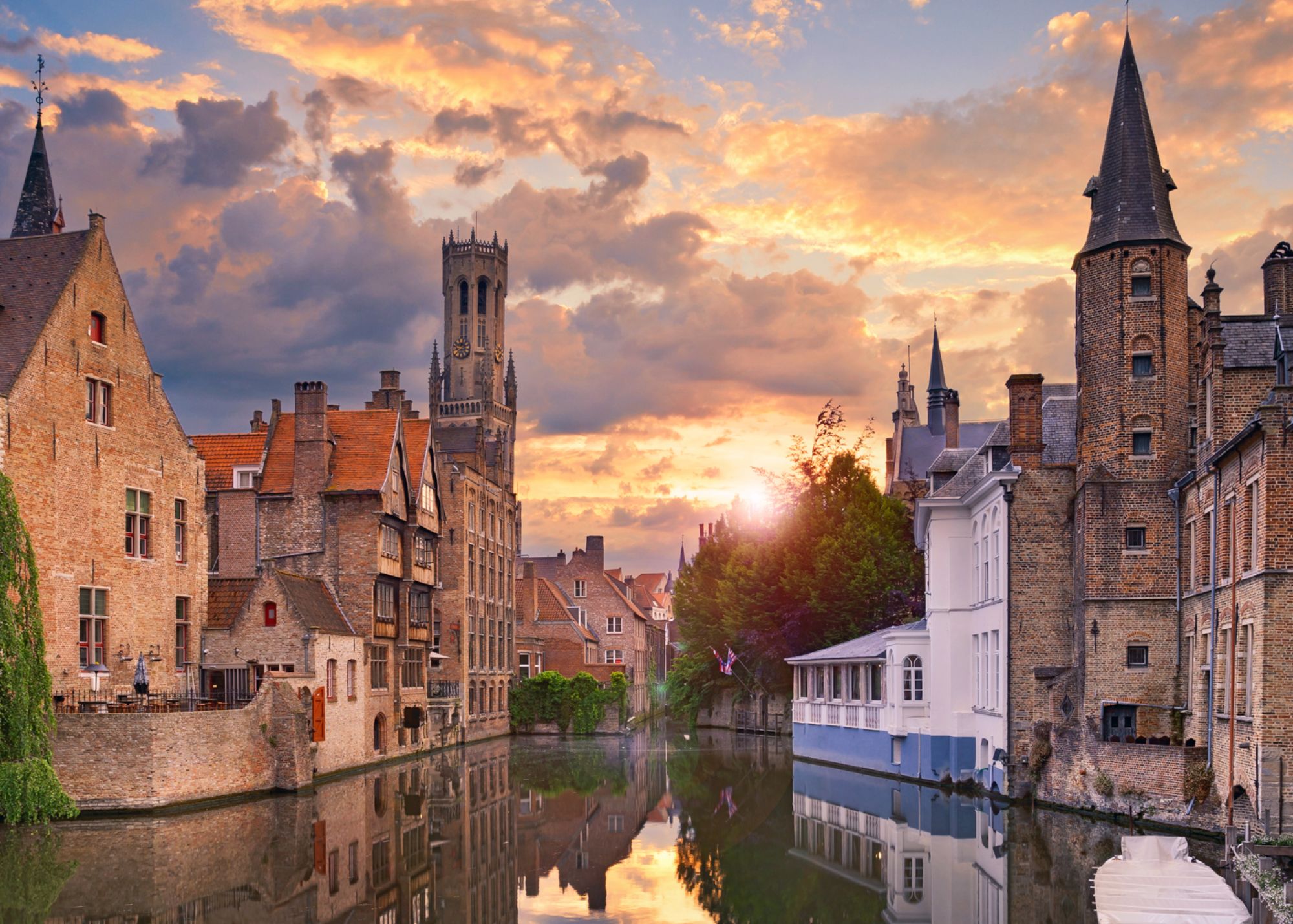 The northern Belgian region of Flanders is home to the lovely city of Bruges.

It was once the wealthiest city in Europe, but now it's a mix of global cultures and upper-middle-class sophistication in a very small area.

It is mostly known for its well-kept historical center, which brings in more than 400,000 tourists every year.

It is sometimes called the Venice of the North, along with cities like Amsterdam and St. Petersburg that are built around canals.

Because of its port, Bruges is an important economic center, and it was once one of the most important business cities in the world.

Here are the movies and film series that were filmed in Bruges, Belgium:

Among the most popular European cities in the winter, Bruges is often overlooked.

Even though it's cold in December, the charm of its medieval architecture doesn't change, so it's still a good idea to add it to your December plans.

But one of the best things to do in Bruges, Belgium, is to look at the beautiful meadows where flowers are starting to grow.

In the summer in Brugge, the weather is usually cool and there are a lot of tourists.

Every summer, tourists flock to the historic center of Brugge, which takes away from this cute little walled city.

How To Get Around Bruges

Walking is the best way to explore Bruges.

There is also a bus system, but it is best used to go from the railway station to the city center rather than for sightseeing.

Cars are not recommended because the streets of Bruges are small and crisscrossed by canals. Taxis can also be hired at many taxi stands.

Because Brussels Airport (BRU) is the closest major airport, most travelers take the train to Bruges.

The taxi ride from the airport to Bruges takes around 90 minutes and costs 21 euros (about $23).

The train station is just southeast of the city center, about 20 minutes on foot or five minutes by bus from the historic city center.

The Bruge, Belgium tourism website said the following statements related to traveling to and from Belgium:

Travelling to Belgium is allowed. On arrival, NO proof of vaccination, recovery or test needs to be presented. There is no obligation of testing or quarantine. A Passanger Locator Form is no longer required. The Corona measures on travel to Belgium were lifted on 23 May 2022, except for travellers from very high risk countries.

Fans of The Lord of the Rings and The Hobbit should not miss the opportunity to visit Matamata.

During the time when the Lord of the Rings trilogy was being made, it was hailed as having some of the most incredible special effects that were available at the time.

The irony is that the stunning natural scenery of the filming location had almost little to do with the visual effects.

Matamata is located in the Waikato area on the northern island of New Zealand.

It is one of the main ways to get to the Hobbiton Film Set, which is in a rural area.

You can use the movies as a tourist guide so that you can select where you want to go first before setting foot on this incredible island that is gifted with unrivaled natural beauty.

Here are some of the feedback found online:

What a fantastic introduction to the world of hobbits. The i-site was a perfect introduction to Hobbiton. It had a range of books, tea towels, T shirts and hobbit ears. (A must for any 'would be hobbit') Staff were helpful and approachable. A really brilliant building on the main street of Matamata.

"One of my biggest dream is to go there and play the ambient music of the shire while reading on top of that beautiful elf-like home."

"Thanks New Zealand for preserving this set. Very smart to turn it into a tourist attraction. I'd thought they let it go to ruin."

JURASSIC PARK / JURASSIC WORLD Filming Locations You Can Visit on Your Hawaii Trip!

The video above shows the movie "The Jurassic Park" filmed in Kauai, Hawaii.

The people who made the movie picked the best places to shoot on the Hawaiian islands of Kauai and Oahu, so you will be impressed if you go see them for yourself.

Some of them you have to walk to, others you have to fly to, and some are right by the road.

Some are free to see, while others cost money to tour.

Some of them are on private land, and you can't go there without special permission.

In the video, you can see the 11 places where the following key scenes and many others from the Jurassic Park movies, including the new one, "Jurassic World: Fallen Kingdom," were shot.

Kauai is an island in the Central Pacific and it is a part of the group of islands that make up Hawaii.

It's called "the Garden Isle" because a lot of its land is covered by tropical rainforest.

The area around the Wailua River served as the setting for the vast majority of the film's realistic sequences.

A visit here is warranted if it was deemed significant enough to be featured in a blockbuster film like Avatar.

So, if you've ever wished you were on another planet, this might be the solution to your search.

From "South Pacific" to "Jurassic Park," movies and television shows have chosen Kauai as the gorgeous backdrop for epic stories for decades.

Take a movie tour to learn about the more than 60 feature films made on location in Kauai, or explore them on your own and create your own movie moments.

We will not include all 60 films, but the author will select a few of them:

There are no longer any COVID-related requirements for arriving domestic passengers. Additionally, as of June 12, 2022, the U.S. federal government no longer requires a negative pre-departure COVID-19 test result or recovery from COVID-19 documentation.

People over 65, people with weak immune systems, people who care for people at risk of getting very sick, and people who haven't been vaccinated against COVID-19 should still wear masks.

But some places of business may still require or suggest that people wear masks.

If you're curious about what it takes to become a film producer but aren't sure where to start, check out our comprehensive list of the top states for filmmakers.

In 2022, these will be the top states for film production companies:

Which City Has The Most Movies Based In It

Central Park in New York City is the place where movies have been shot the most, with 532 credits.

The biggest and most significant public park in Manhattan, New York City, is Central Park.

It was one of the first parks in America to be created utilizing methods of landscape architecture.

The park has a wide range of terrain and plants, from flat grassy swards and gentle slopes to shady glens and steep, rocky ravines.

British Columbia is a great place to shoot movies because it has a lot of famous landmarks and beautiful scenery.

British Columbia is the third-largest place in North America for making movies and TV shows, after Los Angeles and New York City. In 2010, about 246 film projects and $1.02 billion were made there.

The following well-known films were filmed in British Columbia:

What State Has The Most Film Productions?

Georgia's film industry has produced more full-length movies than any other state in the United States.

Meet the Browns (2008), Life as We Know It (2010), Contagion (2011), and several Marvel Studios productions (including Avengers: Infinity War, Avengers: Endgame, Ant-Man and the Wasp, and Black Panther) were all filmed in Georgia.

Which Are Top 5 Film Industries In World?

What City Has The Most Movie Studios?

There has always been New York since there was Hollywood. For the most part, anything not created in Los Angeles is made in New York. Numerous Rom-Coms, crime dramas, and Woody Allen comedies have been filmed in the city.

Thank you for reading the world's most renowned movie set locations in 2022!

If you're having trouble keeping all this info on the world's most incredible filming locations straight, then we've done our job well.

Truly, you cannot go wrong with any of the above, but if you want to make your trip truly unforgettable, choose the ones that captivated you from the very first time you laid eyes on them.