In 2020, perhaps we should stop and carefully consider who we are dishing our number out to in hope of some flirty banter… it could lead to much more than you bargained for!

For one’s own entertainment, Emily Cain, a brunette with long tanned legs and 3,297 Insta followers decided to have herself some festive fun with a lad who DM’d her his number.

Sharing the comical exchange on Twitter, she said: “A lads just sent me his number so thought I’d take advantage of it”.

Pretending to message from an ‘animal rescue centre’ caring for chimps in need, Emily began by congratulating the unsuspecting guy for “successfully adopting bubbles the chimp!”. 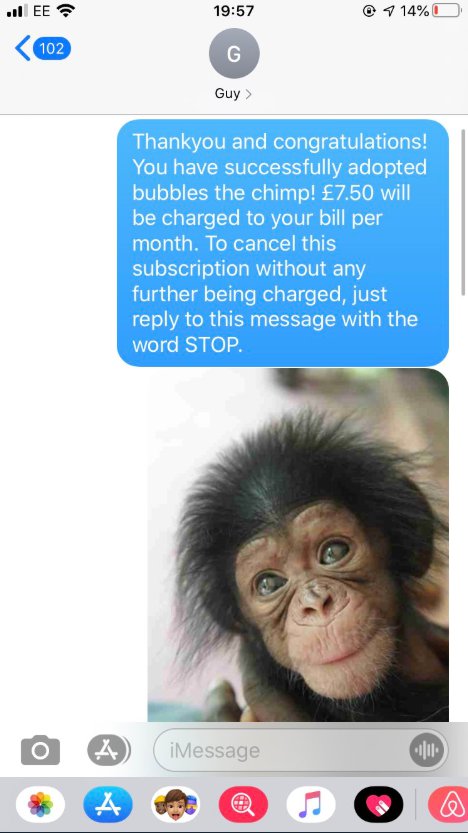 The opening text continued to inform the poor bloke that he would be ‘charged’ £7.50 a month to his bill for the ‘adoption’ of Bubbles.

Emily was sneaky enough to slip in that he could “cancel this subscription without any further being charged”, just by replying STOP.

But this was where the fun could really begin…

Each time he attempted to cancel the fake direct debit; Emily began adding more onto his imaginary bill.

In response to his first two “STOP” attempts, Emily replied with the following: 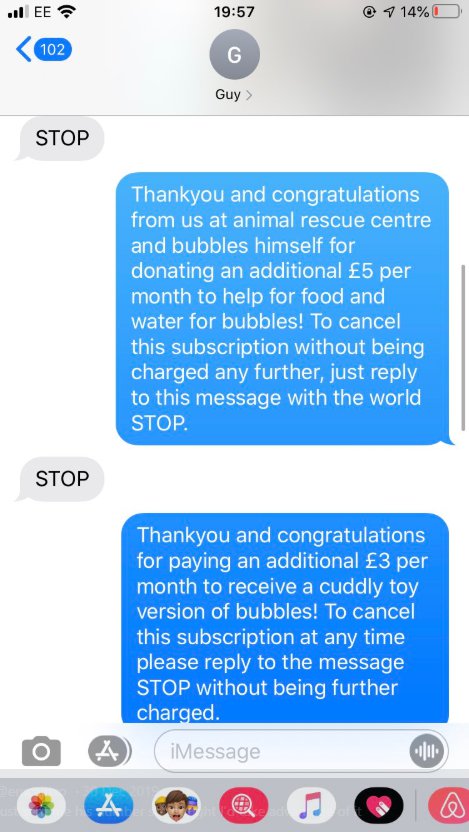 Now the guy had accrued himself an additional £8 worth of charges per month and a cuddly toy version of Bubbles.

He must’ve been thinking WTF?!! 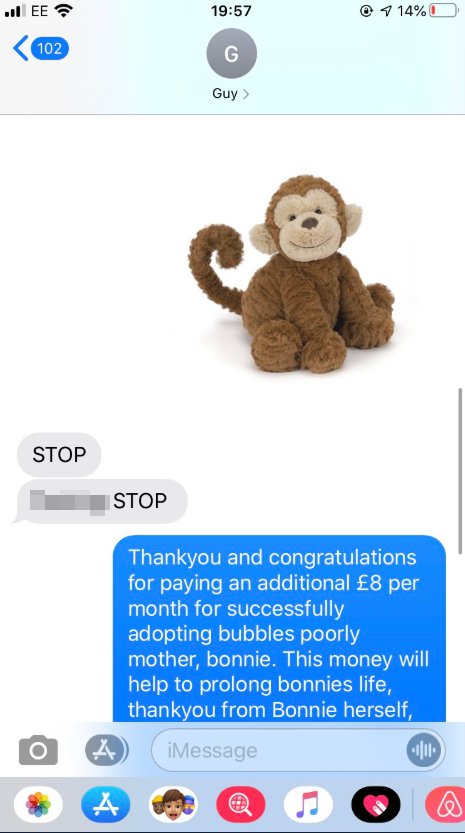 Evidently, having too much fun to even think about ceasing her prank, Emily adds on another £8 per month for “successfully adopting bubbles poorly mother, bonnie” to help prolong her life.

Brilliant stuff – and the image of Bonnie was even better! 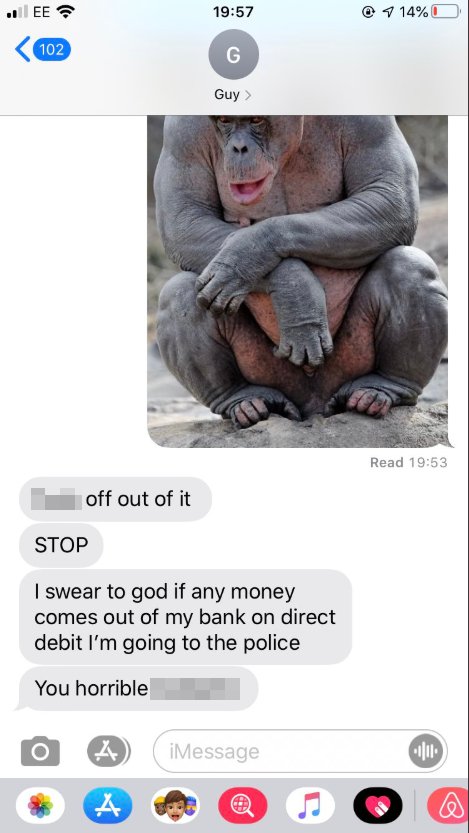 He then asks if there’s a support number to contact the ‘centre’ directly.

Of course, there is, but it’s “50 pence per second to call”, Emily responds. 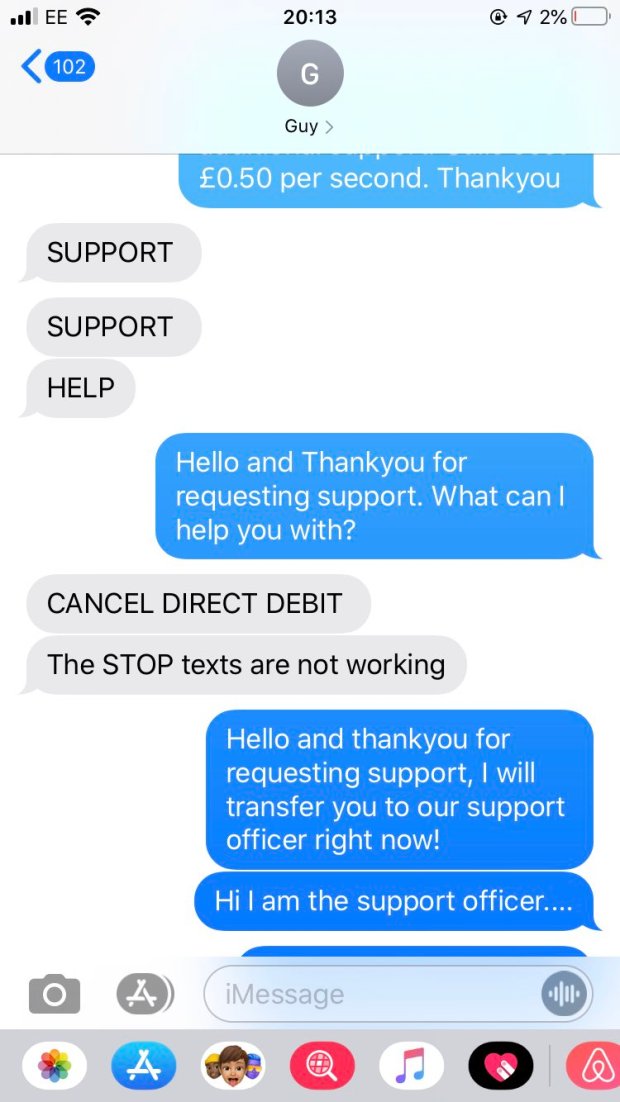 We bet he’s puce in the face right about now.

Surely, she’s had her fun by this point?!

Emily readily responds to his outcry for support and initiates a fake helpline asking him what he’d like support with.

As she introduces herself as his ‘support officer’ he informs her he wishes to cancel all of the direct debits he did not willingly sign up for. 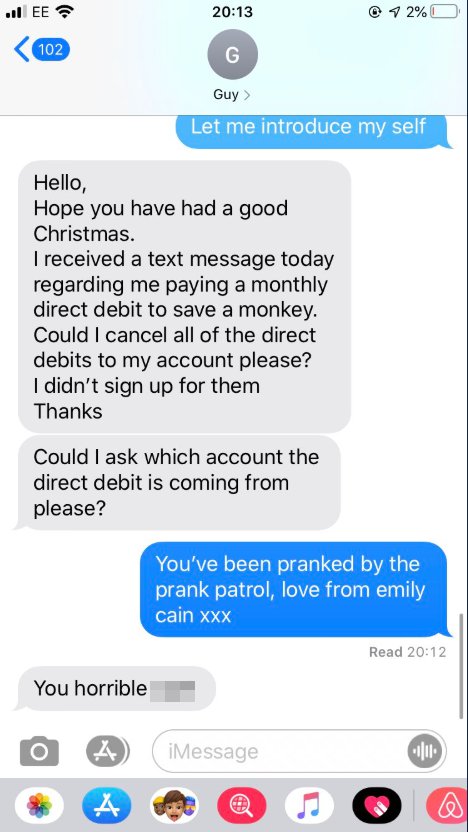 Emily then decides enough is enough and reveals her true identity and that he had been subject to a prank by the “prank patrol”.

His reply: “You horrible —-”, (insert your choice expletive here!).

We know what we’d say!

The prank has since gone viral on Twitter, racking up more than 20,000 likes with people revelling in the poor guy’s misery. 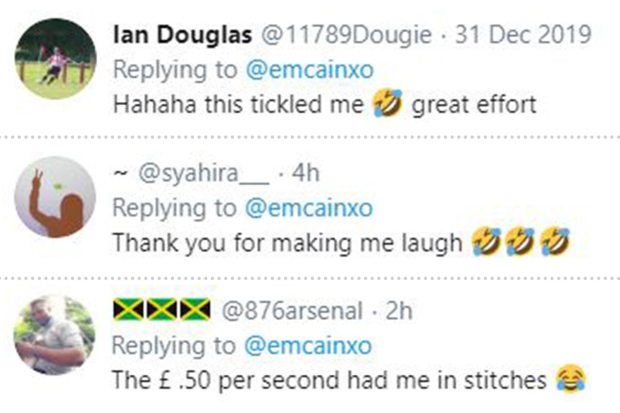 Do you reckon there will be a date as a result or will he just have to resort to snuggles with Bubbles the cuddly toy?!