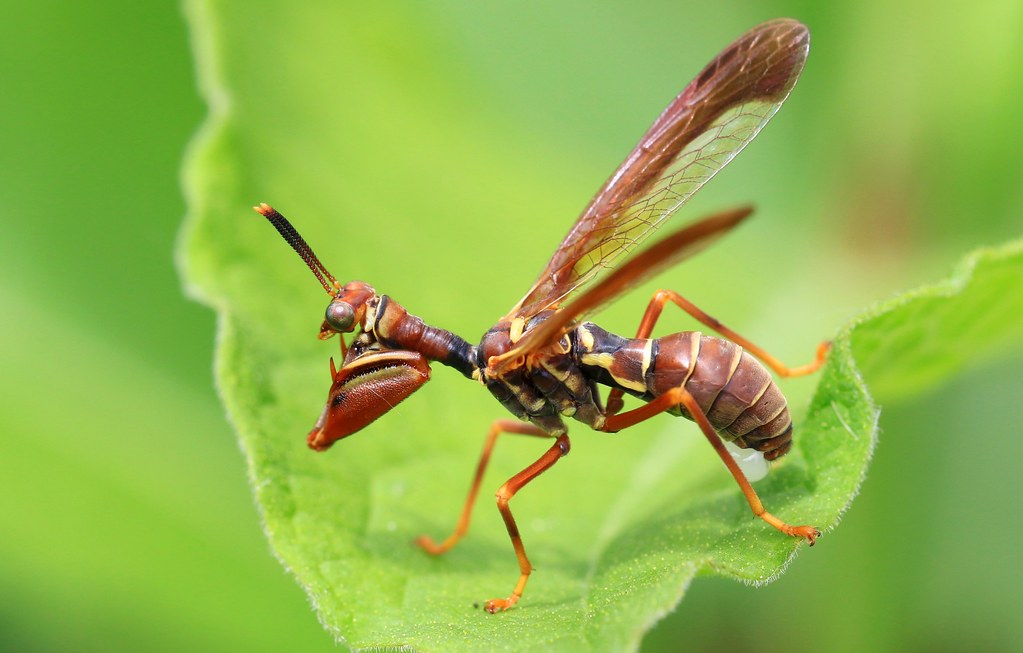 This Wasp Mantidfly mantis mimics wasp, also known as Climaciella brunnea, is a fragile insect that measures just a hair longer than an inch and a half in length.

It resembles a cross between a praying mantis and a paper wasp due to the yellow and brown stripes on its body, the triangular form of its head, and the raptorial (grasping) forelegs on its front legs. 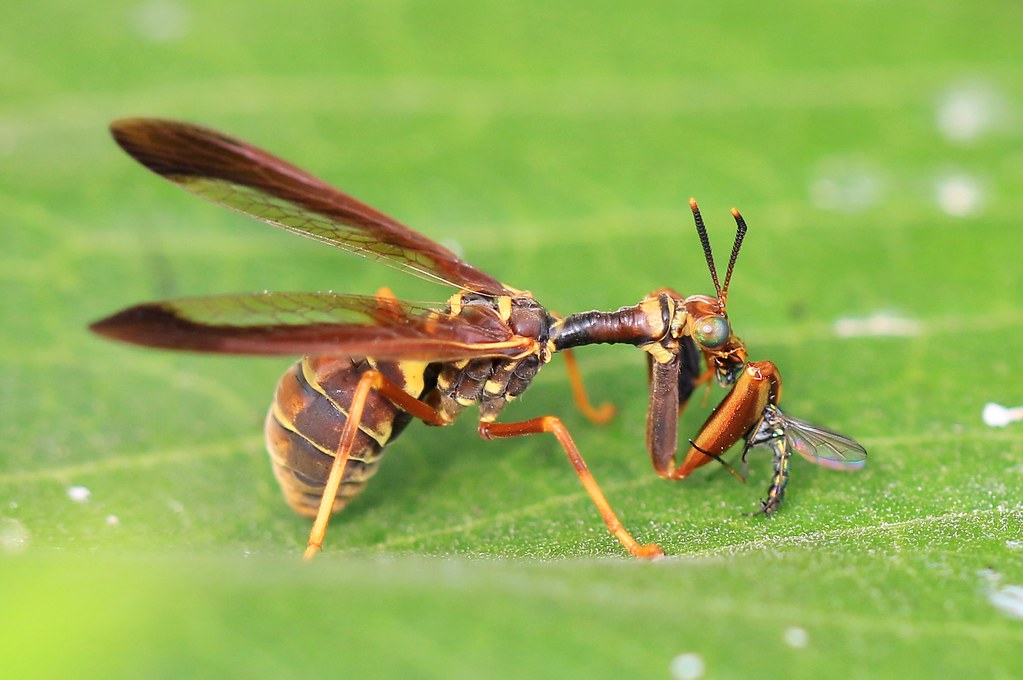 Brown and yellow wasp mantidfly on a leaf

This wasp mantidfly mantis mimics wasp. In spite of the fact that it looks like wasps and is called mantises, it is neither of those things.

It is a member of completely other order of insects known as the Neuroptera, which is also known as a nerve-winged insect.

This order also contains other insects such as lacewings, owlflies, and antlions.

Some mantidflies, such as Climaciella brunnea and Euclimacia nodosa, are wasp mimics, but the majority of mantidflies are brownish in color with green, yellow, and sometimes red undertones.

The wasp mantidfly is widely dispersed in the state of Colorado, despite the fact that it is a relatively rare insect.

It has been discovered in a number of locations in eastern Colorado, as well as in counties on the West Slope that are located close to the Utah border.

It is possible to locate it wherever huge wolf spiders, which serve as hosts for the larvae, are found. 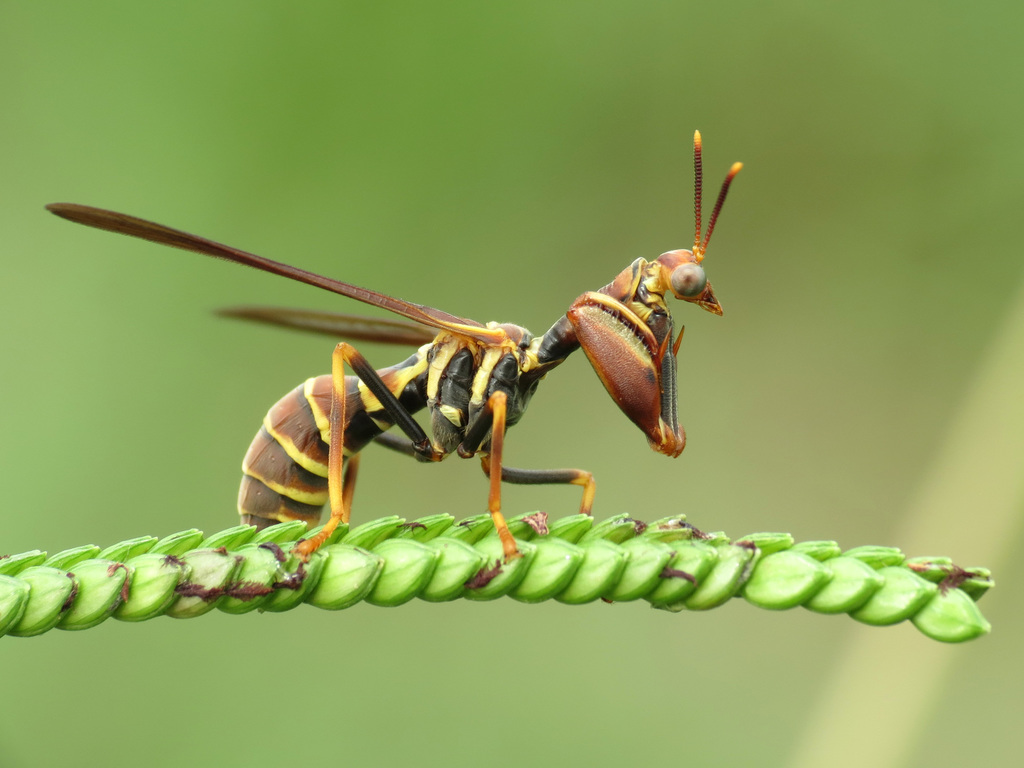 What Does It Eat?

Adults mantidflies are generalist predators that feed on a variety of smaller insects, including other mantidflies and other species of mantids.

They are similar to praying mantises in that they utilize their forelegs to capture and hold their prey as they consume it.

In addition to it, they consume nectar and the sap of trees.

Where Can You Find Them?

These insects can be found in every state in the United States, as well as in Canada and Mexico to the north and south, respectively.

Adults emerge in the late spring and live in lightly wooded areas with open edges. They may typically be found in flowers and plants.

Males have a rather limited lifespan and are often not seen until springtime.

Females have a longer lifespan than their male counterparts and can be encountered later in the summer.

Adult wasp mantidflies are generalist predators and won't have an effect on any particular group of insects; nevertheless, in regions where they are widespread, they will diminish spider populations since they swallow complete spider egg sacs.

Adults mantidflies are comparable in size to paper wasps and are similar in coloring.

They will move their abdomens in a pumping motion when they are startled, which looks very similar to the behavior of an angry wasp getting ready to sting.

In addition to this, as they continue to throb in a stinging manner, they will stretch their wings, bend forward, and position their abdomens upward. 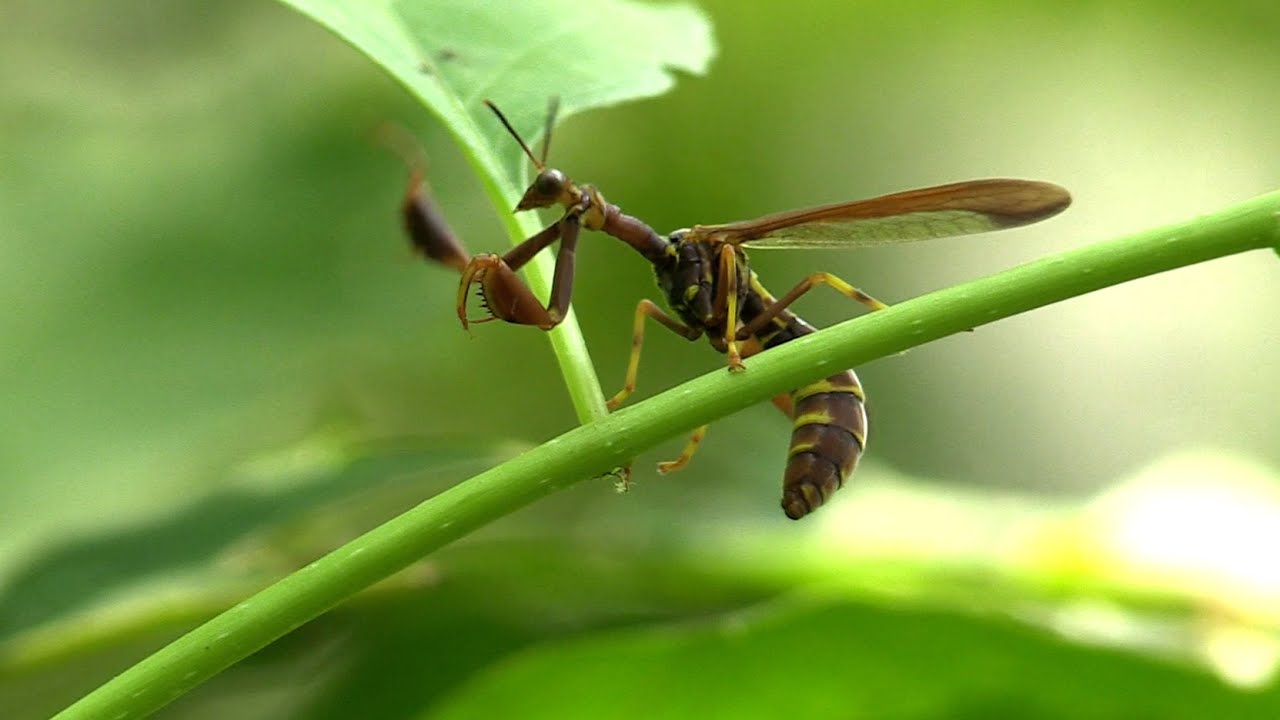 Brown and yellow wasp mantidfly on a plant stalk

They do not have a stinger of any kind. This phenomenon is known as "Batesian mimicry," and it occurs when an otherwise innocuous species imitates the morphological characteristics of a hazardous species.

The order Mantodea, of which praying mantises are a part, is not connected to any of the other orders.

This means that the typical raptorial forelegs and triangular heads with huge eyes of each group emerged individually.

This type of evolution is known as convergent evolution.

A Reddit user named 'typing' said, "These guys are cool, mimcry in the insect world is common, but seeing a mantis that looks like a wasp is awesome"

A Reddit user said, "Technically not a mantis either. A mantisfly is in the order Neuroptera, which is one of the closest groups to beetles. It's a second round of convergent evolution here. Layers and layers of stuff!"

Is A Mantidfly A Wasp Or Mantis?

In spite of the fact that they look like wasps and are called mantises, they are neither of those things. They are members of a different order of insects known as the Neuroptera.

Where Can You Find A Mantidfly?

Wasp/Brown Mantid flies, also known as Climaciella brunnea, belong to the family Mantispinae and can be found in open spaces and along margins all the way from southern Canada to Costa Rica. Eaton described them as being about an inch long and saying that In the case of C. brunnea, the body form has been further changed to seem like a paper wasp.

Have you seen this wasp mantidfly mantis mimics wasp before?

Have you heard about the lion's mane jellyfish?