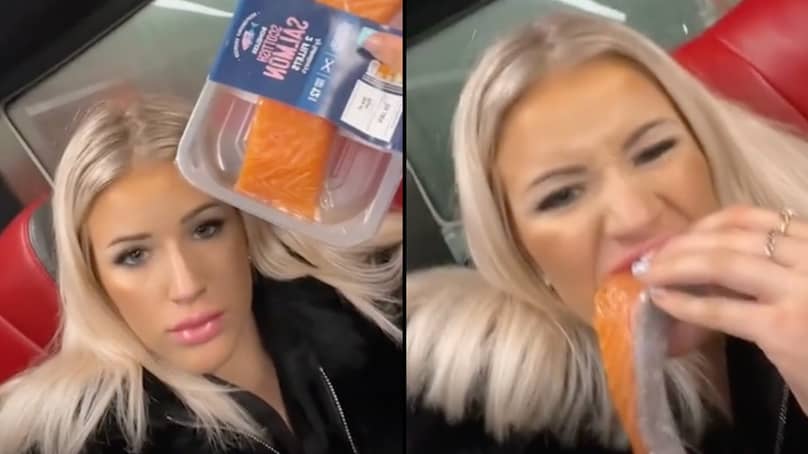 A Tiktoker eats raw salmon flesh and users said its disgusting. In this case, after her video went viral on Tiktok, people started calling her "Salmon Ella." This alias surely comes from a disease called "Salmonella infection." Most people get salmonella from eating raw or undercooked meat, such as raw salmon.

Most people probably know that it's very dangerous to eat raw fish that isn't sushi or sashimi. It is important to note that eating raw meat and fish is never a good idea. But, why?

The sushi has been prepared with care after the fish was harvested. On the contrary, eating raw fish straight from the package isn't a good idea either. Aggie Day, on the other hand, filmed herself ripping open the bag of salmon and sinking her teeth into the uncooked fish.

She uploaded the video on TikTok, asking viewers, "Anyone else or am I a wrongen?" and the internet's reply shows that they don't seem to agree with her, though. The response on the internet was overwhelmingly disgusting.

Many people advised her to get some worm medication quickly in case she had consumed food containing parasites that would typically be eliminated by boiling the fish. Someone called it "minging," which means it was very bad or unpleasant. The second person told her to make sure she gets rid of worms often.

Is Raw Salmon Safe To Eat?

Salmon is often ranked as a superfood due to its numerous health advantages. It has a deep, pleasant flavor and can be prepared in a variety of ways. Salmon is high in omega-3 fatty acids, which is one of the top health benefits of eating it raw or cooked.

In many places around the world, people like to eat raw salmon. Sushi and sashimi are traditional dishes in Japan. They are made with raw fish, such as salmon, and other ingredients.

In the form of poké, raw salmon is often eaten in Hawaii. This is a salad with raw fish, vegetables, and sometimes rice or fruit as well. A raw salmon salad called Yu Sheng is also popular in Singapore. Even though a lot of people eat raw salmon, it's not safe to eat any kind of raw fish or seafood.

Parasites found in some raw fish, such as salmon, can cause illness. If you plan on eating raw salmon, you may prevent these parasites from ruining your meal by freezing the fish first. There is currently no law in the United States requiring restaurants serving sushi or raw fish to flash-freeze their seafood.

When buying raw fish to cook at home, many people look for sushi-grade fish. This name is used to show how fresh or high-quality the fish is. But the term "sushi-grade," is not regulated in the U.S. This means that any raw fish could technically be called "sushi-grade" which is used to describe the freshest fish.

When eating raw salmon, there are a few things to consider. Raw salmon is not safe to consume for some people. This includes the following:

Will You Continue To Eat Raw Fish?

Will You Still Eat Raw Fish After Watching This Video?

This video has interesting information about the impact of eating raw seafood to your health. The video is captioned:

Have you ever noticed that warning about raw or undercooked seafood at the bottom of restaurant menus? Ever wondered why it’s there? Because fish carry a ton of parasites, and if they aren’t prepared correctly then those parasites can make it into your body. But it turns out, this fishy intersection with the wild world of parasites can teach us a lot about how these moochers help keep ecosystems healthy, and why we should protect them.

Many commented that they love salmon but this is a bit extreme, while many others pointed out that if she wanted to eat raw fish, she could. She could get a different type that was safe to eat. Someone else made the joke that she would be "eating raw chicken breasts next week."

But a few of the people who said they were disgusted and worried also said they ate raw salmon right out of the package, so Aggie isn't the only one who likes to snack on salmon. The woman on Tiktok, meanwhile, makes it clear that she filmed herself doing this for fun.

She also said that eating raw salmon wasn't her thing and that she didn't do it every day or very often. The woman said:

I’ve eaten this before, I am aware it’s unhealthy but posted it as a laugh. It’s not something I regularly eat.