Tom Cruise Was Criticized For Using Queen's Jubilee To Promote Himself 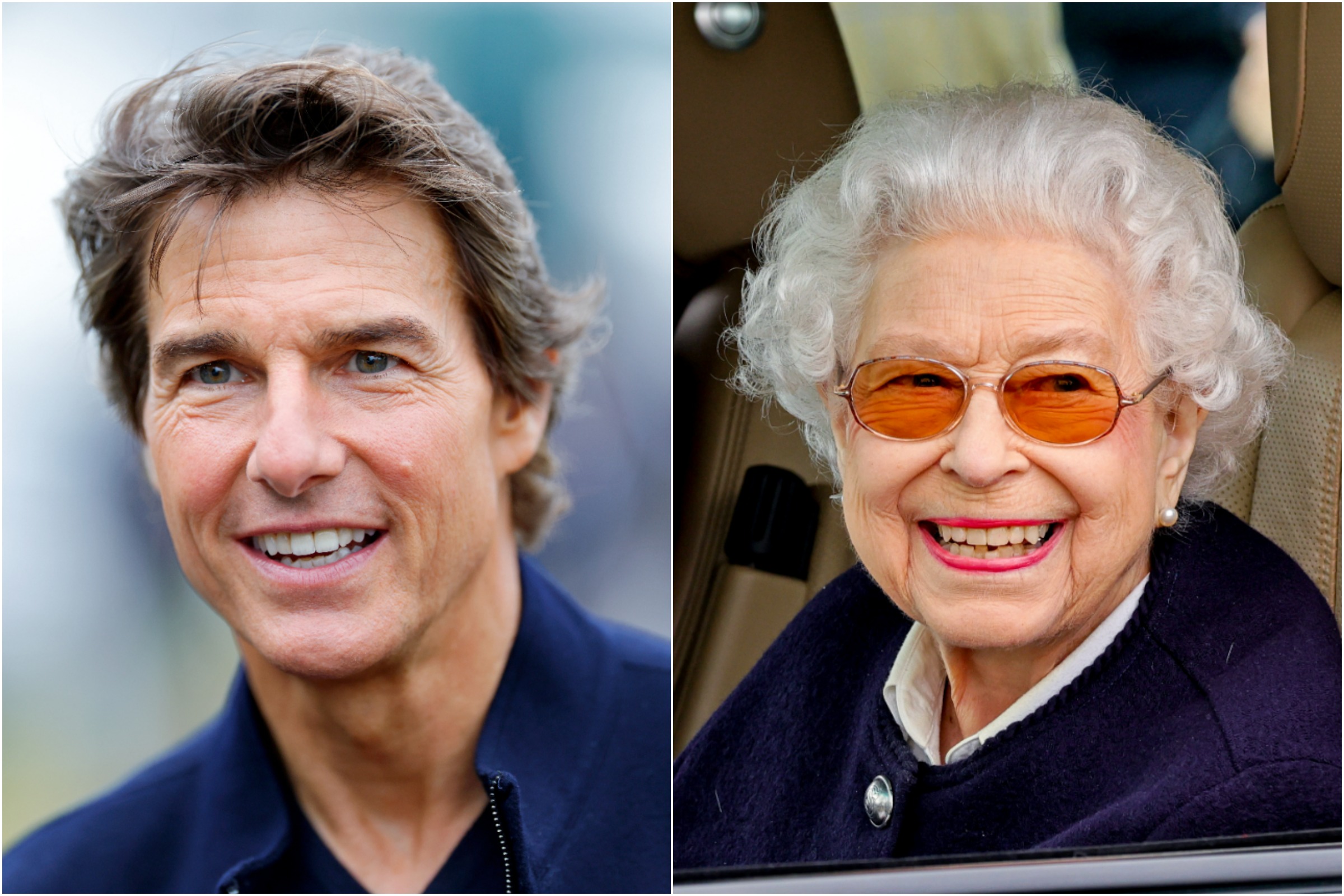 Tom Cruise was criticized for using the Queen's Jubilee celebration to promote himself. Tom Cruise attended the "A Gallop Through History" performance at the Royal Windsor Horse Show at Home Park in Windsor on Sunday as part of the official celebrations for Queen Elizabeth II's Platinum Jubilee. During his conversation with Phillip Schofield and Julie Etchingham, the 59-year-old focused solely on his next film Top Gun: Maverick.

This sparked a lot of negative comments and people started to vent out their disappointments in their social media platforms. Before we go to this ongoing issue, let's get to know more of the actor getting the attention of many and of course, the Queen herself. 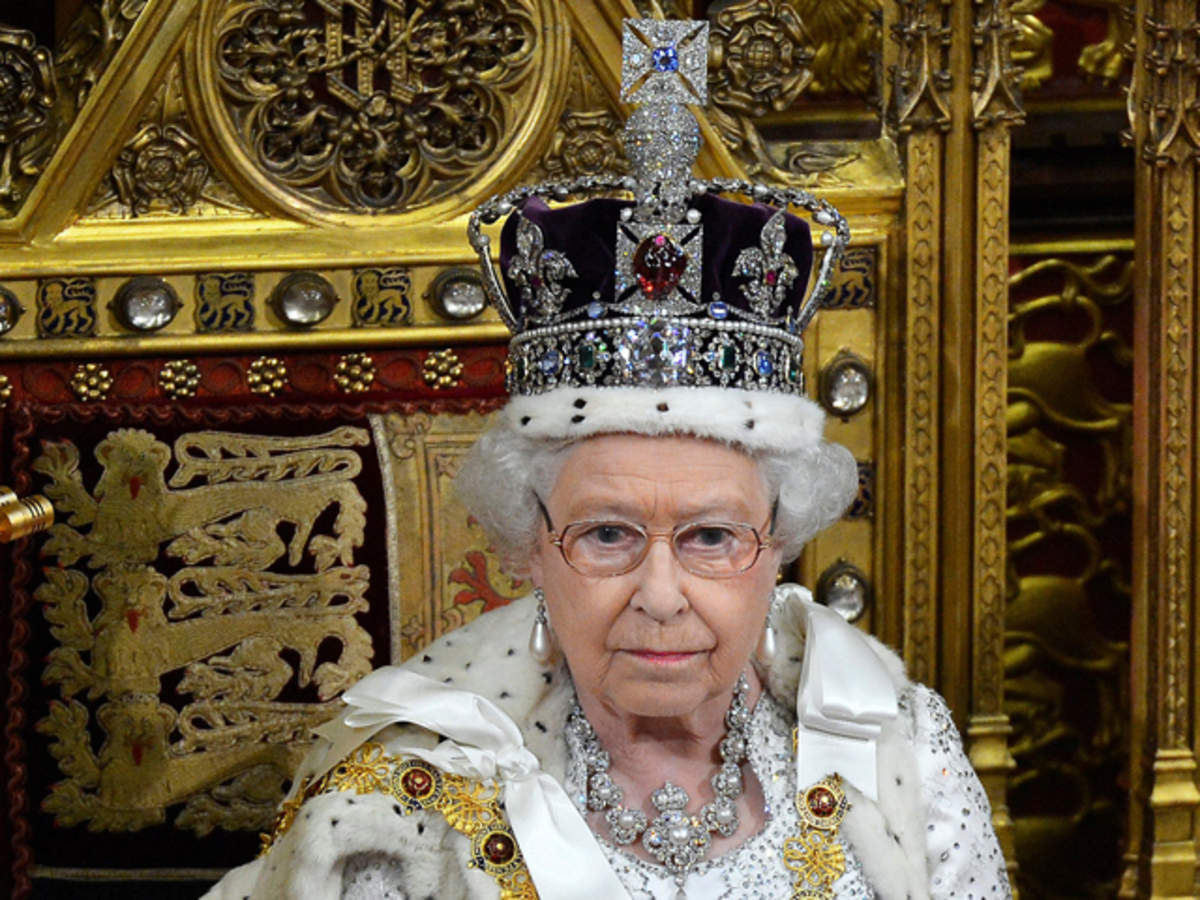 Queen Elizabeth sitting on her throne with the imperial state crown

Elizabeth II (born 21 April 1926) is the Queen of the United Kingdom and 14 other Commonwealth states. Elizabeth was born in Mayfair, London, as the Duke and Duchess of York's first child (later King George VI and Queen Elizabeth). Following the abdication of her father's brother, King Edward VIII, in 1936, Elizabeth became the heir presumptive. She was schooled privately at home and began doing public tasks during WWII, when she joined the Auxiliary Territorial Service. She married Philip Mountbatten, a former prince of Greece and Denmark, in November 1947, and their marriage lasted 73 years until Philip's death in 2021. Charles, Prince of Wales, Anne, Princess Royal, Prince Andrew, Duke of York, and Prince Edward, Earl of Wessex were their four children.

When Elizabeth's father died in February 1952, she became queen regnant of seven sovereign Commonwealth countries: the United Kingdom, Canada, Australia, New Zealand, South Africa, Pakistan, and Ceylon, as well as Head of the Commonwealth. Elizabeth reigned as a constitutional queen during key political transitions like the Troubles in Northern Ireland, devolution in the United Kingdom, African decolonization, and the United Kingdom's entrance to the European Communities and withdrawal from the European Union. Her domains' number has fluctuated throughout time as provinces won independence and certain realms became republics. Among her numerous historic tours and meetings are a state visit to the Republic of Ireland in 2011 and visits to or from five popes.

The Queen's coronation in 1953 was a significant occasion, as were her Silver, Golden, Diamond, and Platinum jubilees in 1977, 2002, 2012, and 2022, respectively. Elizabeth is the longest-serving female head of state, the oldest living and longest-reigning present monarch, and the oldest and longest-serving incumbent head of state. Elizabeth has periodically encountered republican sentiment and royal family newspaper criticism, particularly following the breakdown of her children's marriages, her annus horribilis in 1992, and the death of her former daughter-in-law Diana, Princess of Wales, in 1997. However, support for the monarchy has been and continues to be strong in the United Kingdom, as has her personal popularity. 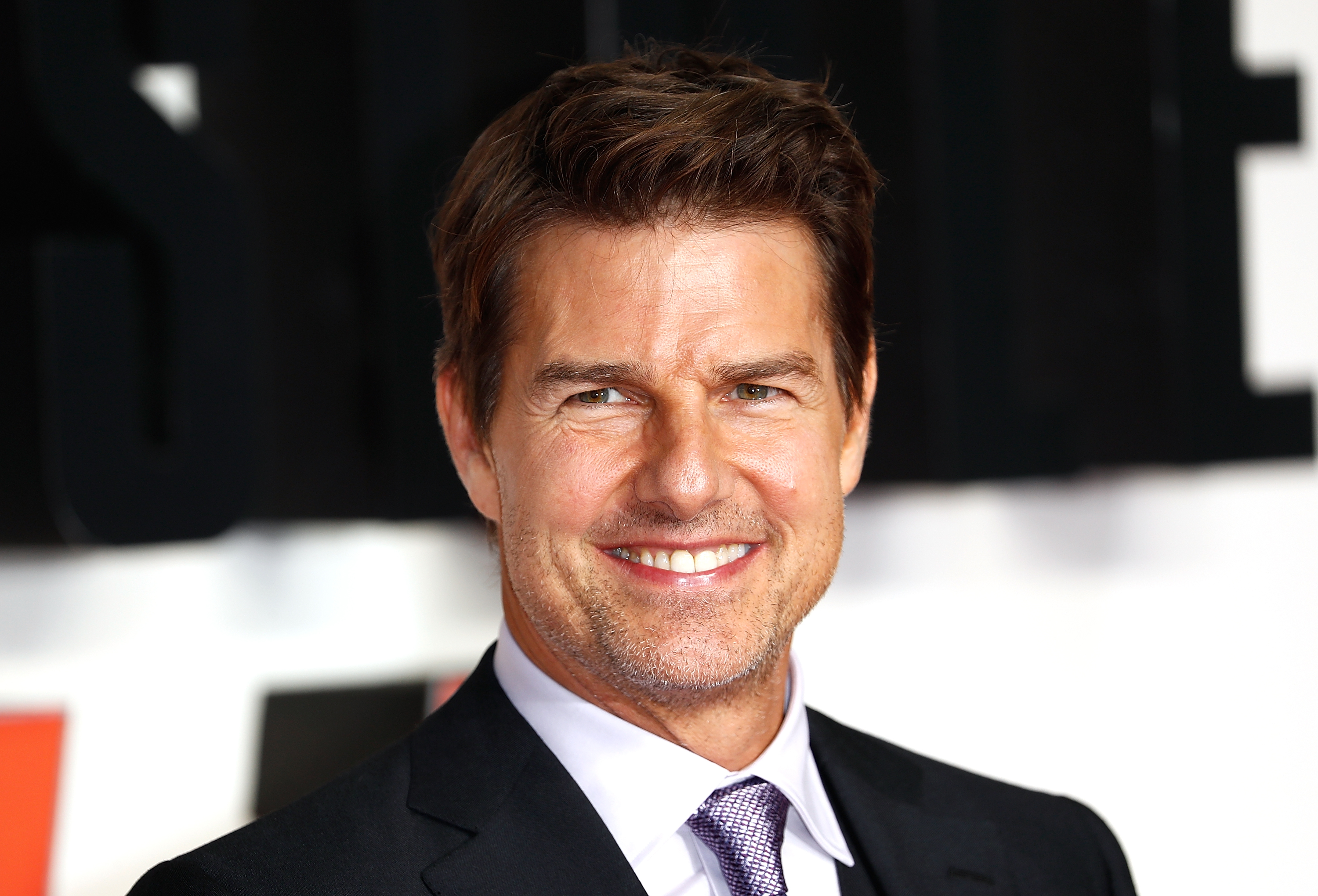 Tom Cruise in his black suit while smiling at the camera

Thomas Cruise Mapother IV, known professionally as Tom Cruise, is an American actor and producer. He is one of the highest-paid performers in the world, and he has garnered numerous honors over his career, including three Golden Globe Awards, as well as nominations for a British Academy Film Award and three Academy Awards. His films have grossed more than $4 billion in North America and more than $10.1 billion globally, making him one of the most successful box office stars of all time.

Cruise was born on July 3, 1962, in Syracuse, New York, to Thomas Cruise Mapother III (1934–1984), an electrical engineer, and Mary Lee (née Pfeiffer; 1936–2017), a special education teacher. His parents were both from Louisville, Kentucky, and they were of English, German, and Irish descent. Lee Anne, Marian, and Cass Cruise are Cruise's three sisters. One of his cousins, William Mapother, is also an actor who has acted in five films with Cruise. Cruise grew up in near poverty and was raised Catholic. Later in life, he regarded his father as a "dealer of chaos," a "bully," and a "coward" who abused his children.

At the Carleton Elementary School theatre festival, he and six other students performed IT, an improvised play to music. In the audience, drama organizer Val Wright subsequently stated, "the dancing and improvisation were superb... it was a classic group work." Cruise attended Henry Munro Middle School in Ottawa in sixth grade. That year, his mother abandoned his father and returned to the United States with Cruise and his sisters. She married Jack South in 1978. In 1984, Cruise's father died of cancer. Cruise briefly attended the St. Francis Seminary in Cincinnati, Ohio, on a Catholic Church scholarship, aspiring to be a Franciscan priest before being expelled for drinking and developing interest in acting. 24–26 In total, he attended 15 schools over the course of 14 years. In his senior year of high school, he was a linebacker for the varsity team but was cut after being found drinking beer before a game. He later appeared in the school's performance of Guys and Dolls. He graduated from Glen Ridge High School in Glen Ridge, New Jersey, in 1980. 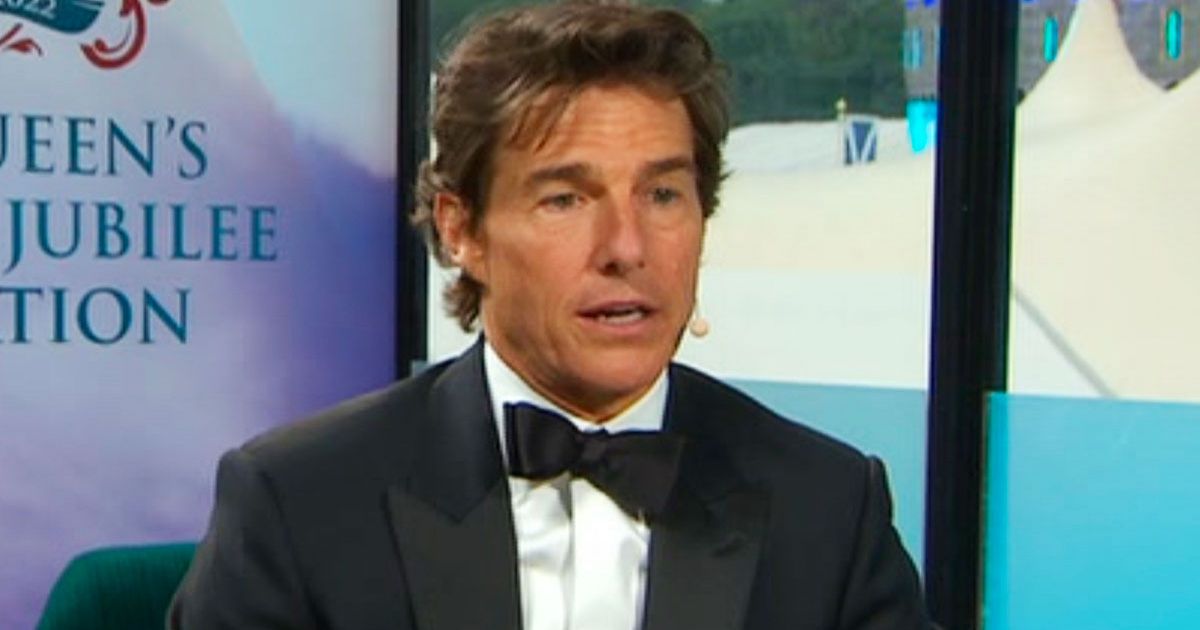 Tom Cruise in an interview in ITV promoting his latest movie

The 59-year-old actor sparked frantic scenes in Windsor on Sunday afternoon ahead of his appearance at the celebrations, but he afterwards left ITV viewers disappointed when he promoted his latest movie.

Tom, reprising his role as Pete 'Maverick' Mitchell, sat down with Phillip Schofield and Julie Etchingham during the joyful evening but quickly became a talking point on Twitter for discussing at length about his highly anticipated movie release.

He told Phil and Julie:

Every film I make is important, but this one, people have been asking for decades. For decades I’ve been thinking ‘what could I do?

Tom noted that while the sequel's production was "emotional," the decision to make another picture was "for the fans." Although the Jerry Maguire star praised the monarch, viewers were disappointed that the focus was on his film rather than the Queen.

Various comments circled all over the net, and most of them are actually negative ones towards the actor. Eventhough Cruise sang praises for the monarch, he still failed to impress the ITV viewers knowing that the spotlight was rather given to his much-awaited film instead of the Queen. Cruise said:

It's a wonderful event; it's an honour to be here. It's a privilege, Cruise expressed. She is just a woman that I greatly admire. She has tremendous devotion and I admire her dignity. I love the history. I have great respect for her. It's wonderful, I really love the tradition. What a moment!

Fans, on the other hand, flocked to social media to criticize the Mission Impossible star.

Why has Tom Cruise just promoted his new film?

Thought it was the Queen's Jubilee not an opportunity for Tom Cruise to promote himself.

Since the actor promoted his latest movie during the Queen's Jubilee, some people started to get curious about the said film.

Is Top Gun: Maverick A Sequel? 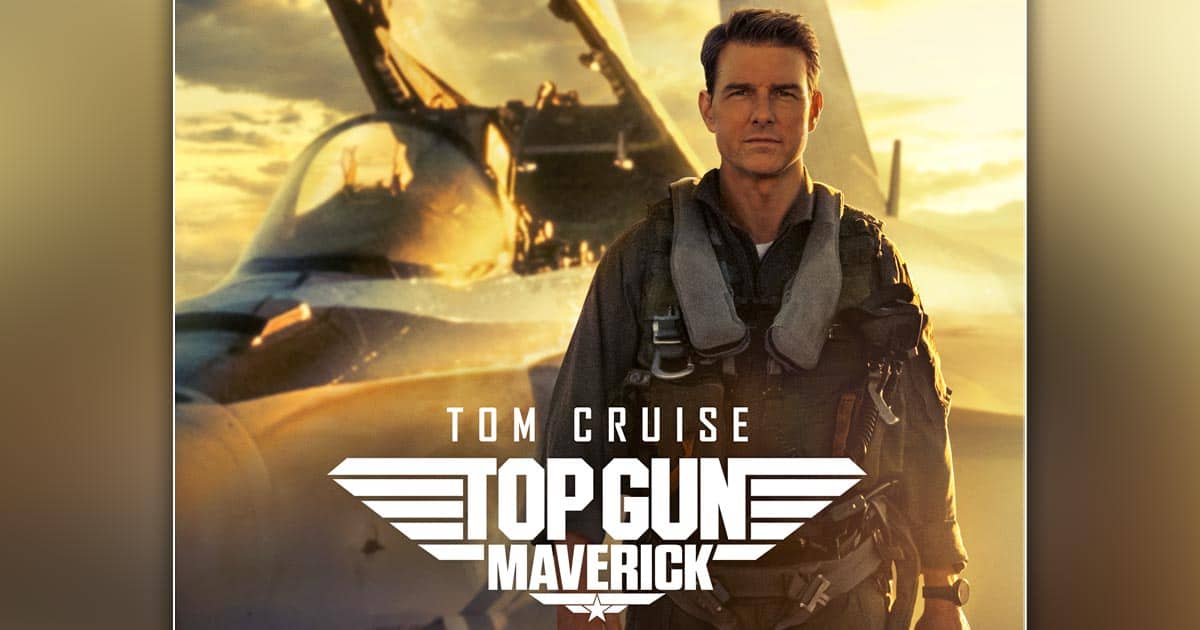 The answer is, yes. For “Top Gun: Maverick,” a sequel 36 years in the making, the successor to the original film's Kelly McGillis is Jennifer Connelly. She plays Penny Benjamin, a character referenced in the first film, and love interest to Tom Cruise's Pete “Maverick” Mitchell. As hotshot US Navy pilot Maverick, Cruise reprises his main role from one of the 1980s' blockbuster films.

Top Gun: Maverick was supposed to be released in 2019, however it was postponed so the crew could finish work on the flight sequences. The coronavirus pandemic then added to the delay. The Independent praised it as a true legacy sequel and described it as exhilarating as blockbusters go.

Is Top Gun Based On A True Story?

The iconic film of the 1980s owes its existence to an eye surgeon. "Top Gun," one of the most famous movies of the 1980s, never claimed to be based on a factual story. The truth is that it is based on a sequence of genuine stories, many of which originated with someone from the field of ophthalmology: Steven C.

Where Can I Watch Top Gun On TV?

Eventhough Tom Cruise was criticized, in the latter part of the interview, Tom continued to praise the Queen. Whether he had done this whole mess unintentionally, the people already reacted negatively to the interview. Now this whole fuzz could be an advantage or a disadvantage to the actor's movie.