This translucent cockatoo squid (Leachia sp.), often known as a glass squid, resides at the depths of the ocean and has several adaptations that help it survive there. It stores ammonia solutions within its body that give it a balloon-like form and help it float. The transparent Cockatoo Squid or Glass Squid contains huge eyes and pigment-filled cells, or chromatophores, that look like polka dots and serve as a disguise. 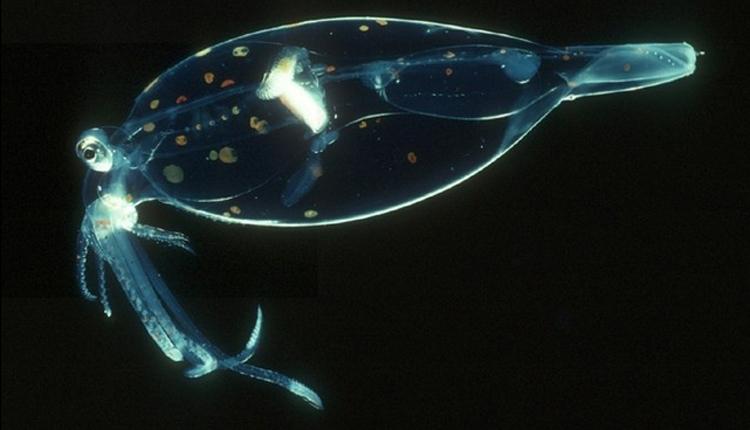 A glass squid in the deep ocean

The transparent Cockatoo Squid or Glass Squid, cranchiid, cranch squid, or bathyscaphoid squid, is a member of the family Cranchiidae, which includes roughly 60 species of glass squid. Cranchiid squid is found in open oceans all around the world, at surface and midwater depths, in surface and midwater depths. The enormous squid, for example, has a mantle length that ranges from 10 cm (3.9 in) to more than 3 m (9.8 ft) in length.

The term "glass squid" refers to the transparent aspect of most species, which gives rise to the common name. Cranchiid squid spends the majority of their lives in shallow seas that receive some sunlight, where their transparency serves as camouflage. They are distinguished by a bloated body and short limbs, which bear two rows of suckers or hooks on either side. The third arm pair is frequently enlarging in size.

Many species are bioluminescent organisms, and they have light organs on the undersides of their eyes, which they utilize to balance out their shadows while they are in the dark.

The shape of the eye varies greatly, ranging from big and round to telescopic and stalked in appearance. To increase buoyancy, a huge, fluid-filled container containing an ammonia solution is utilized. It is this buoyancy system that distinguishes the family from others, and it is the source of its common name, "bathyscaphoid squid," which comes from the fact that they resemble a bathyscaphe.

The cigar-shaped digestive gland, which is the cephalopod counterpart of a mammalian liver, is frequently the sole organ that can be seen through the translucent tissues of the mollusk. In order to minimize its silhouette, this is normally kept in a vertical position, and a light organ may be present on the lower tip to further lessen its appearance in the water.

When the young, glass squid species reside on the surface of the sea and gradually drop to deeper depths as they grow in maturity. Some species can be found more than 2 kilometers below sea level. Many species' body shapes change dramatically as they progress through their maturation phases, and many juvenile specimens could be mistaken for members of entirely different species.

Where Are Glass Squids Found?

Glass squid with googly eyes can be found in the Pacific, Atlantic, and Indian oceans, all along the circumglobal 40° southern parallel. Immature googly-eyed glass squid is typically found at depths of approximately 900 meters (3,000 ft). Mature squid can be found in depths ranging between 1,600 and 2,400 meters (5,200 and 7,900 ft). 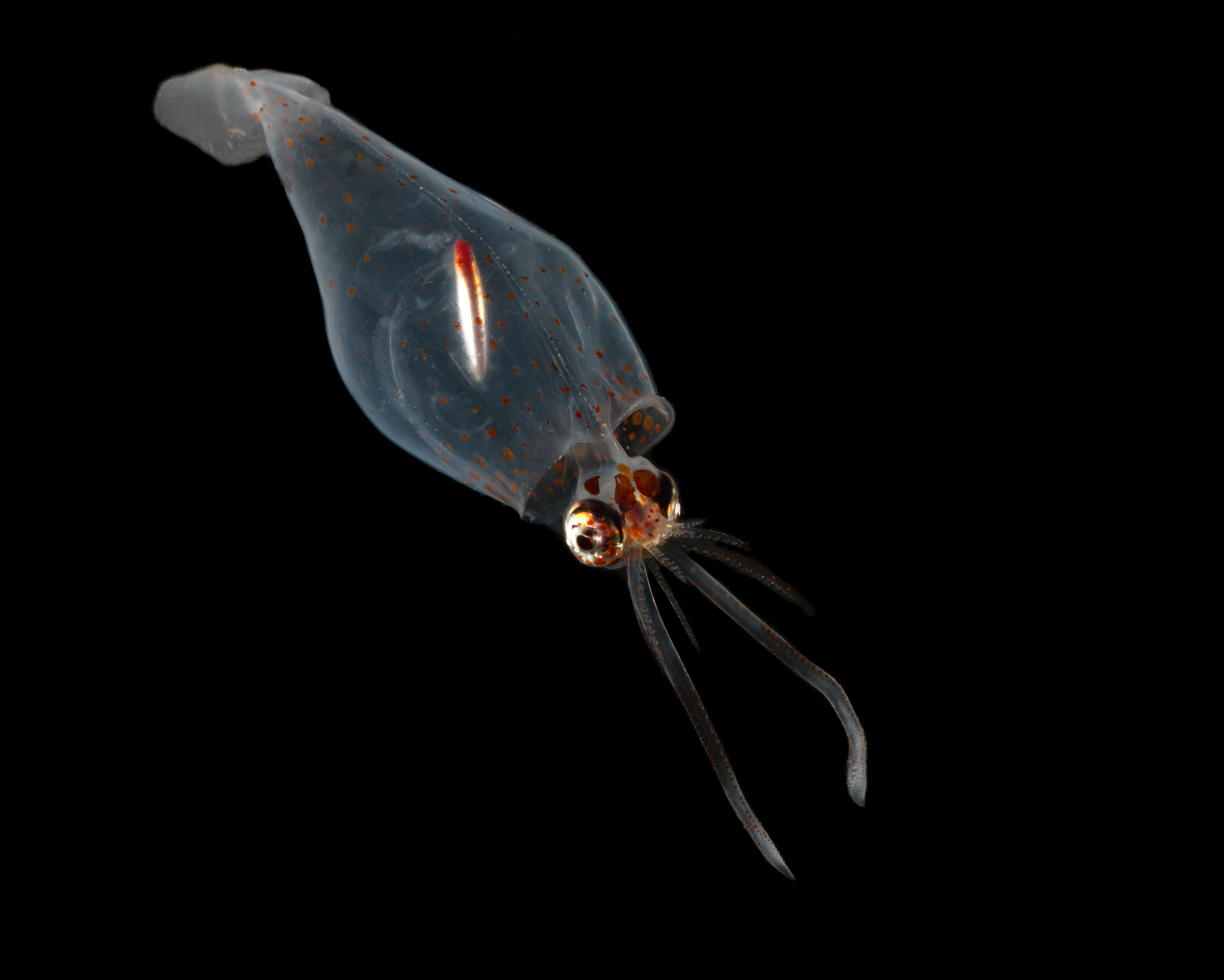 A close up shot of glass squid in the deep sea

The lives of glass squid are spent moving with the current. Literally. They float freely across the ocean, buoyed by ammonium chloride, a solution that is lighter than seawater. They are on the lookout for mates and food when they are filled with ammonium chloride.

Juveniles' transparent bodies, which let them blend in with their surroundings after being born into the light-filled surface waters, may be advantageous. Glass squid reach maximum size at four months and are ready to be released into far deeper water. So far, they have been discovered as far as 2,000 meters below the surface of the water (6,600 feet).

The microscopic tubercles dotting the body of glass squid (also known as their "mantle") have earned them a bad reputation. Chranchia sabra, in particular, has earned this notoriety. A squid may turn into a lumpy ball by cramming its bulbous head and tentacles into the mantle chamber of its body if they believe the danger is approaching. They also have the ability to "become dark," which means that they can instantly change the color of their skin to black. Scientists have discovered that when attacked, glass squid secretes ink into their mantle, which may aid them in changing color or act as a chemical weapon against hungry whales and seabirds, according to the researchers.

The Camouflaging Ability Of Glass Squids

The cockatoo squid, like octopuses and other cephalopods, is covered in small pigment-carrying cells known as chromatophores, which allow the animal to change color and reflect traces of light when exposed to different light sources.

Counter-illumination is a technique in which the transparent glass squid employs photophores (light-producing organs) to illuminate itself. Using this technique, the animal emits light that flickers and waves, giving the impression that sunlight is seeping down from the water surface beneath its feet.

The cockatoo squid, also known as the glass squid, is a transparent squid that is transparent except for its eyes and visceral nuclei, which are visible. According to Our Breathing Planet, some species of squid can grow to be more than 9 feet in length in some circumstances.

People are really appreciating this amazing creature on Reddit.

The squid itself also seems made-up.

"I'm convinced squids and octopuses are from a different planet"

"This is giving me that monster from Signs vibes."

Not only does the glass squid have shape-shifting and camouflage abilities, but the transparent Cockatoo Squid or Glass Squid also has some other fascinating tricks up his sleeve. Photophores, or light-emitting organs, located around their eyes assist them in seeing in the dark and scaring away predators. On the tips of their arms, females also have photophores that are thought to be effective for drawing mates to themselves.