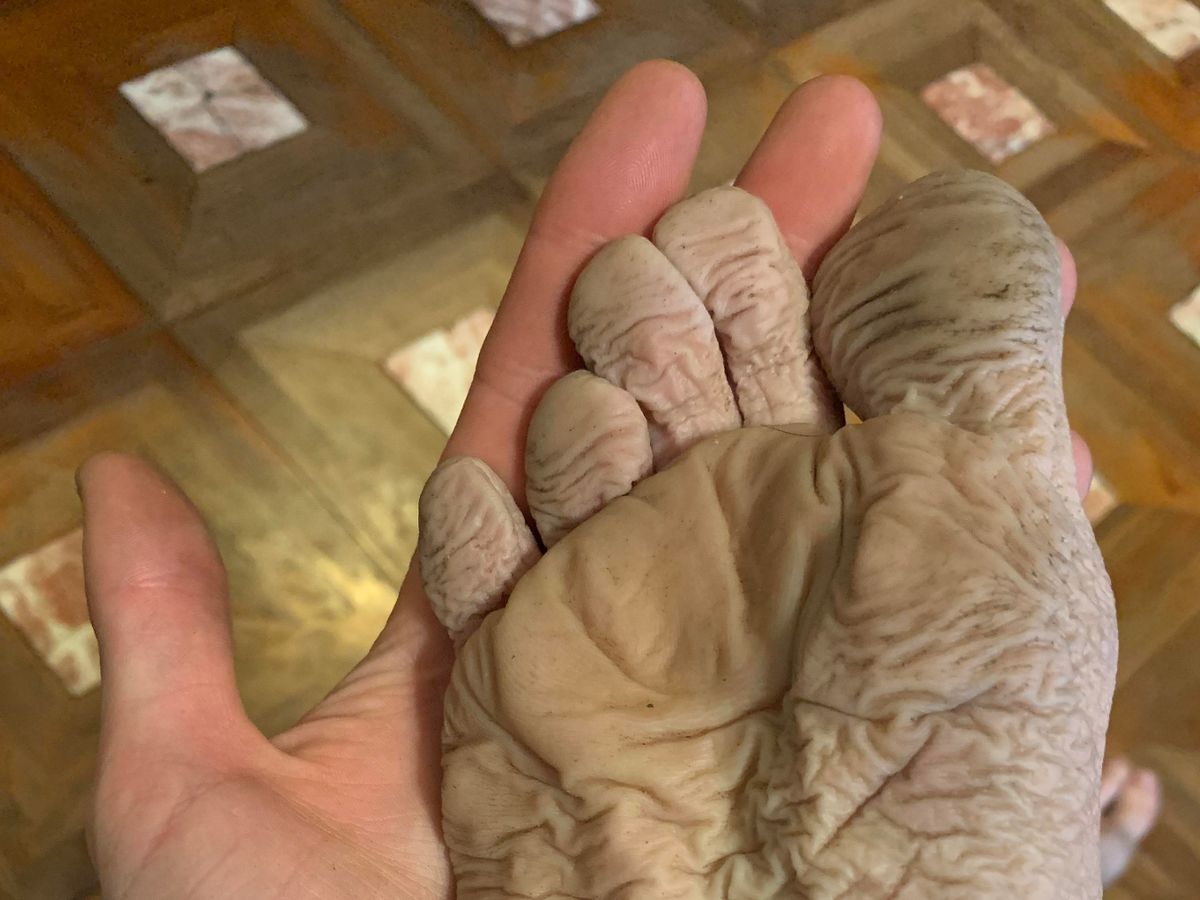 When your feet are submerged in water for an extended period of time, a condition known as trench foot or immersion foot can develop.

Trench foot was a common problem for soldiers in the past who had to fight for long periods of time while standing in wet, muddy trenches.

Although it can be rather painful at times, it is both preventable and treatable.

This foot condition was uploaded to the Reddit community by u/copiumjunky, and it has received 438 comments and 4.2 thousand upvotes as of right now.

In this article, we will be discussing the opinions of Reddit users over the post that was titled "The Beginning of Trench Foot."

You will also learn about how to treat trench foot and the factors that contribute to its development.

Reddit is where thousands of communities, a never-ending stream of conversation, and real connections between people come together.

I spent 2 days at a festival in the heat without ever taking my wellies off.. (including when 'sleeping') - when I finally did take them off, my feet looked like this.

On the other hand, Foef Yet Flalf offered its thoughts on the initial comment, where it mentioned the following:

Thankfully for you, trench foot is usually driven by exposure to cold moisture, and constriction of the blood vessels to the feet. As long as your shoes weren't too tight and they stayed warm, you weren't at risk.

PhillyFart wants to remind everyone that the first and most important rule of hiking or camping is to change your socks.

MeAndTheLampPost recalls some of its memories after experiencing trench foot.

I remember a city trip in april, staying at the local camping, keeping the same socks on for three days, day and night because it was friggin cold. I went home hitch-hiking, and because of bad planning I walked long distances. There I could peel the skin of my feet, couldn't walk normally for two weeks.

My scout troop went to a camp near the Poconos (PA) for a week a while back. Day 2, it rained. Hard. Everything (including shoes) were soaked. Did not rain again, but the humidity at night kept them from drying, so every morning we’d put on our shoes, get our socks wet from the shoes, and go about our day. 4 days into the week, my feet, and I’m assuming other’s as well, looked like that. It hurt. I went to the doctors when we got home after the remaining 3 days, and was diagnosed (along with others scouts) with trenchfoot.

This Redditor described how standing even felt like standing on burning coals, with every step causing them to feel every single rock edge through their five-inch boots.

The next point is the real-life experience of a person who wears a pair of wet boots for 10 hours.

Man With Trench Foot After 10 Hours In Wet Boots

A worker who had a hole in his boot and spent hours walking on muddy grass submitted a photo of his foot later to Reddit, and no one is exactly sure what to make of it.

The photograph was uploaded to Reddit with the title: "My foot after wearing a wet boot with a hole in it for 10 hours."

He said that it didn't hurt too much now that he was home and had washed, but that his feet were "wicked sensitive."

He also told everyone that he was on his way to get a new pair of work boots.

Traces of Trench Foot can be found in the history of World War I.

As a result of living in the trenches during World War I, soldiers developed trench foot.

It had a lot to do with the slush and muck that soldiers on the Western Front had to deal with.

In general, the trenches of World War I were dirty and dangerous places where soldiers had to go through a lot of hard times.

The trenches of the Western Front were particularly prone to this, as was the case on the Eastern Front.

The Western Front trenches were spread out across Belgium and northern France, two places where it rained a lot.

Here is a sample video of troops coping with trench foot or foot immersion.

Trench foot can be avoided by letting your feet air dry, propping them up, and swapping wet shoes and socks for dry ones.

The way trench foot is treated is similar to how frostbite is treated.

Frostbite happens when the skin and the tissues underneath it freeze after being in very cold temperatures. Follow the steps below:

Trench foot cases are classified into one of the four stages listed below:

In the first stage, which is known as the injury stage, the blood supply has been reduced, and the affected tissue feels both cold and numb.

There is no discomfort, despite the fact that the limb may be either red or white.

After the injured limb has warmed up, the skin on it may turn from white to blue, and it will continue to be numb and chilly.

This is the second stage, which occurs immediately after the injury. There is a possibility that there will be some mild inflammation.

The hyperaemic phase, which marks the beginning of stage 3, can last anywhere from two weeks to three months.

During this time, the affected limb will become hot, red, and dry, and the skin will also become flaky.

There is frequently discomfort, as well as a sensation of pins and needles.

Blistering is a potential complication in more severe cases.

The post-hyperemic stage, often known as stage 4, consists of the following:

A user on Quora by the name of Steven L. Gaudry made a distinction between athletes' feet and trench feet.

Trench foot was caused by having your shoes and feet continually wet for extended periods of time. Like months and months and months on end. It is medically called maceration. The skin is constantly "prune fingered" and circulation in the area is minimal. However, althlete’s feet are lesser than that. It does thrive in wet conditions but is caused by a fungus. It does not have the same life-threatening consequences as trench foot.

Athlete's foot is a tiny but very contagious foot fungus, while trench foot is caused by not giving enough attention to keeping your feet dry.

What Is Trench Foot Symptoms?

Some of the signs of trench foot are tingling and/or itching, pain, swelling, cold and blotchy skin, numbness, and a heavy or prickly feeling in the foot.

After becoming warm, the foot may become red, dry, and painful. Blisters may form, followed by the death and shedding of skin and tissue.

How Do You Get Rid Of Trench Foot?

While trench foot can be treated in the short term, it can cause long-term tissue damage and chronic pain. A person suffering from trench foot may require long-term care. The first step is to remove the person from the cold, wet environment and gradually warm the affected limb up.

Does Trench Foot Rot Your Feet?

Trench foot is a type of moisture-related foot damage. Tingling or itching are common early symptoms, which can progress to numbness. The feet may turn red or blue in color. As the condition worsens, the feet may swell and begin to smell like decay. If trench foot isn't treated, it can lead to gangrene and even the need for surgical removal.

What Is Trench Foot Caused By?

Trench foot is caused by long periods of time spent in places that are often colder than freezing, wet, and sometimes dirty. Later, the condition causes the skin and tissues to break down, which increases the risk of infection and the chance of getting sick or dying from it.

Can You Get Sick From Cold Wet Feet?

Your nose and throat become inflamed, producing a lot of mucus. You're tired and miserable because you're expending so much energy fighting the cold virus. One myth that needs to be debunked is that getting cold or wet does not make you sick.

The amount of time your feet will spend soaking wet is not something to be taken lightly.

Why? For the simple reason that during World War I, trench foot claimed the lives of an estimated 2,000 Americans and 75,000 British men.

As a result of World War I's infamous trench foot outbreak, people are now more conscious of the importance of keeping their feet dry.

Trench foot can still occur today if your feet are exposed to cold, wet conditions for an extended period of time.

Make sure your boots aren't too tight if you're wearing them.

If your feet do become wet, be sure to swap out your socks frequently to keep your feet dry.

To help maintain normal blood flow, drink plenty of water and get some exercise.

Trench foot can be avoided by wearing socks and shoes that are both dry and warm.