Utah DWR Is Restocking Fish In Remote Reservoirs Across The State 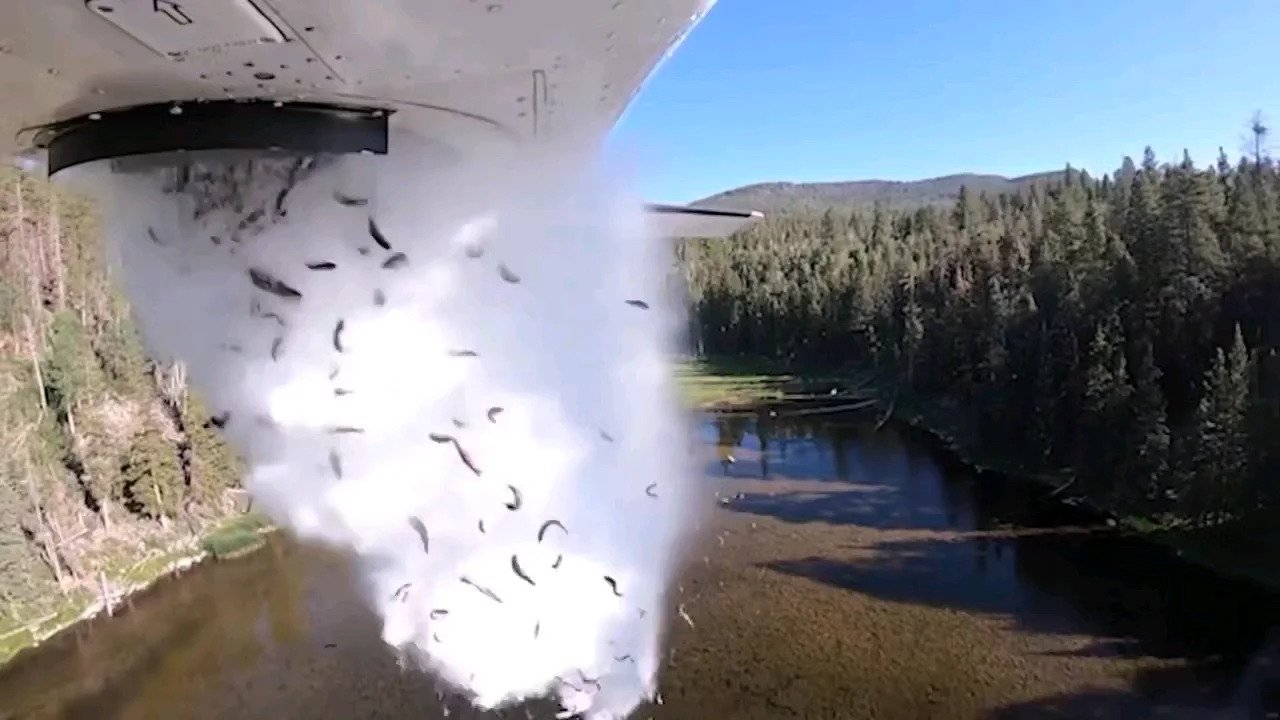 Utah DWR is restocking fish in remote reservoirs across the state by dropping fish through a plane in fishless lakes.

According to a spokesperson of the DWR who spoke with Storyful, this video was taken on Monday, June 27, and depicts the release of brook trout across Silver Lake Flat Reservoir in the Wasatch Mountains region.

It is an annual program of the Utah Division of Wildlife Resources (DWR) of restocking fish during spring and early summer. 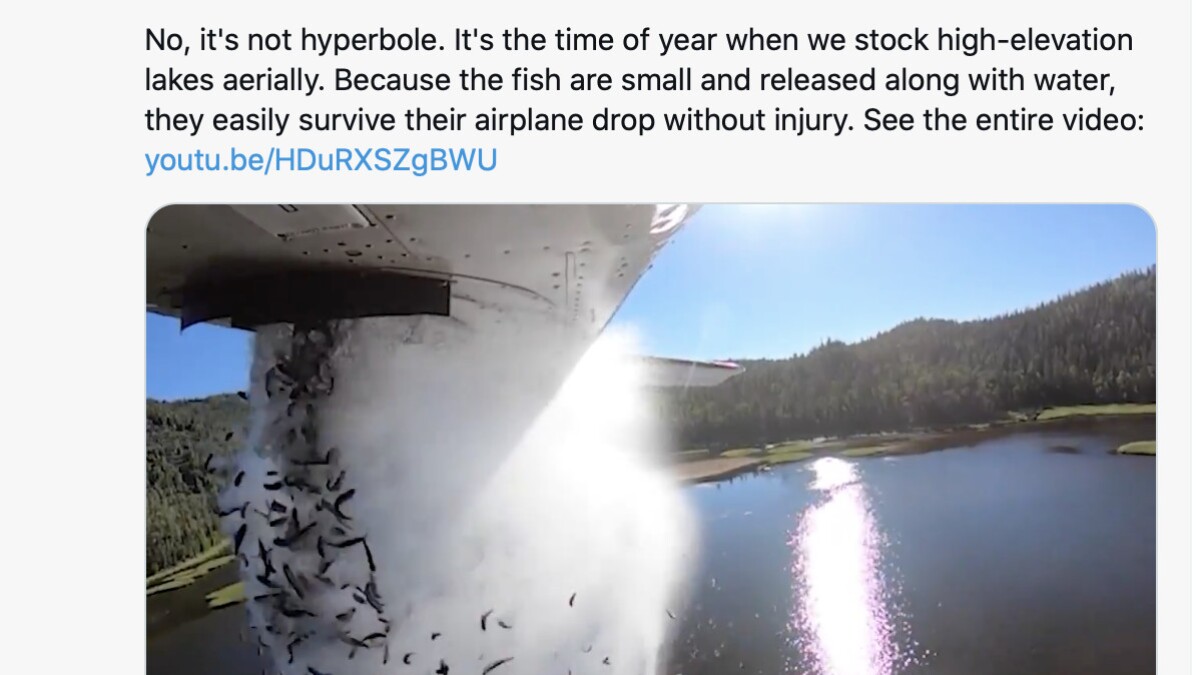 Snapshot of a post of Utah restocking fishes in a reservoirs

At first look, it seems that the video footage is showing what appears to be confetti shooting out of the tail of an airplane.

However, if you look closer, you'll see that the stream actually comprises live airborne fish that are falling into the lake.

According to the Department of Wildlife Resources website, the practice of stocking fish from aircraft began in Utah in 1956.

Before the 1950s, the agency used to transport fish to outlying regions in milk cans, which were then pulled by horses.

However, it maintains that plane drops are significantly more efficient in terms of time and money and "less traumatic" for the fish and everyone involved in the process.

Currently, more than 300 lakes at higher elevations receive this type of stocking on an annual basis to assist maintain healthy fish populations.

The Utah Division of Wildlife Resources stated on their Facebook page,

There is a pretty good survival rate from this method of fish stocking, when we do this, we only stock very small fish. The fish are small enough that the air slows their drop. The slower fall allows the fish to survive.

The Department of Water and Wildlife (DWR) has stated before that this strategy enables the state to control the amount of fish while having no effect on any native fish populations. 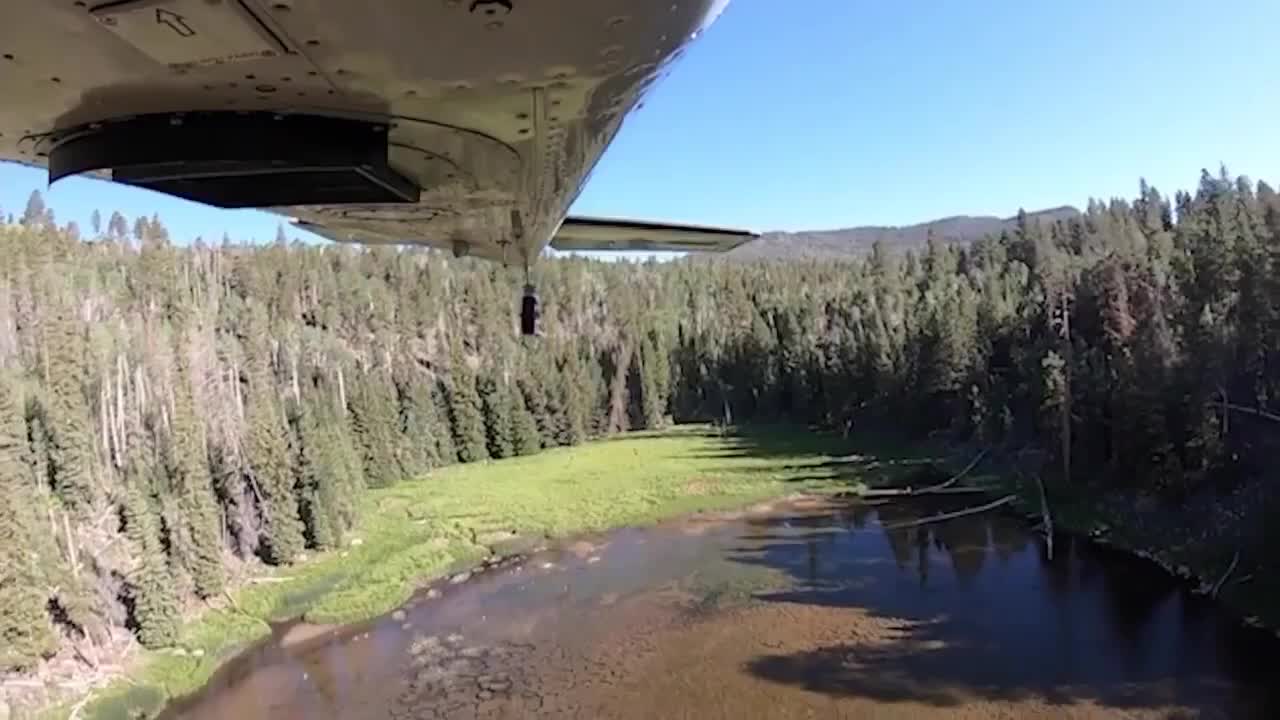 Aerial view of a lake in Utah taken from the plane

The footage was taken during a drop that occurred earlier this month (June 2022) in the Boulder Mountain region of the state.

The drop was a part of the agency's yearly effort to restock some 200 high-elevation Utah lakes, which are popular fishing destinations but are difficult to reach by other vehicles.

Fish of many species, including rainbow trout, cutthroat trout, brook trout, tiger trout, splake, and Arctic grayling, are purposefully bred and reared for the purpose of being caught and consumed by anglers.

The fish typically measure between one and three inches in length.

They are then placed in fishless lakes that have no natural means of reproduction.

According to the Department of Wildlife Resources in the state of Utah, this enables the state to control its numbers and does not damage any native fish populations. 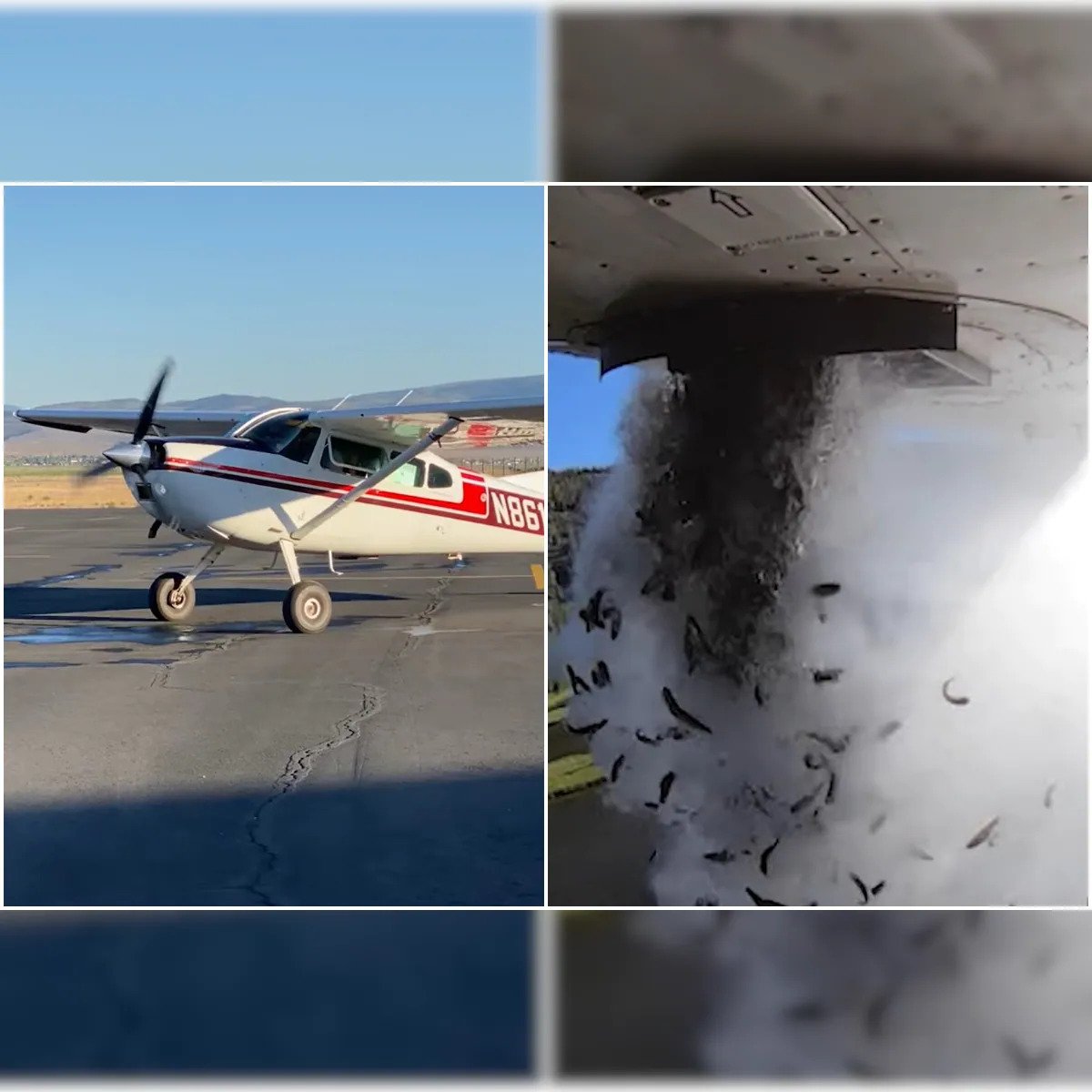 An outside view of a plane; Fishes being dumped from a plane into the lake

The state of Utah, along with many other states in the United States, has been refilling lakes for decades.

The aircraft, each of which can contain hundreds of pounds of water, fly just over the tree line and have the capacity to release 35,000 fish measuring two inches or more in a single flight.

The video shows fish being moved into trucks and then released into their new tanks.

The organization stated in a post on social media that post-stocking netting surveys demonstrated that the survival rate of fish that were replenished aerially was "extremely high."

They added that due to the small size of the fish and the fact that they were dropped along with water, the fish were able to readily survive the airplane drop without suffering any injuries.

In 2017, the division biologist Matt McKell wrote about how "tricky" (and dangerous) it is to refill fish in distant bodies of water using dirt motorcycles and backpacks in what he called "extreme fish stocking."

A Reddit user Alphabunsquad shared the logic why fishes don't suffer any injury while they are being dropped via plane, "Small animals experience very few injuries from falls. Because their bones and organs are much smaller they have much higher tensile strength. Have you ever tried to snap a stick over and over again until it gets very small and then it’s nearly impossible? That’s pretty much how small animals’ bones work"

A Reddit user said, "was also wondering this, also the article says they're very young and small. about 1-3 inches long. so their light weight is affected by the air, slowing their fall. from the video it seems like its a massive 747 dropping adult fish."

Another Reddit user explained why plane travel is preferred for fish restocking, "The air slows their drop and they fall a bit like leaves. The slower fall allows the fish to survive. If the fish were larger, the survival rate would not be as high. We make sure to only aerially stock fish that range from 1–3 inches long. Fish are more stressed when transported by ground because it is difficult to maintain their required oxygen levels in small, packable tanks for such long distances. (Our high-mountain lakes are often many miles from any road)."

Utah DWR is restocking fish in remote reservoirs via plane in the fishless lakes so that the balance in nature can be maintained.