What Are The Holes In Swiss Cheese Called? Let's Talk About Cheese 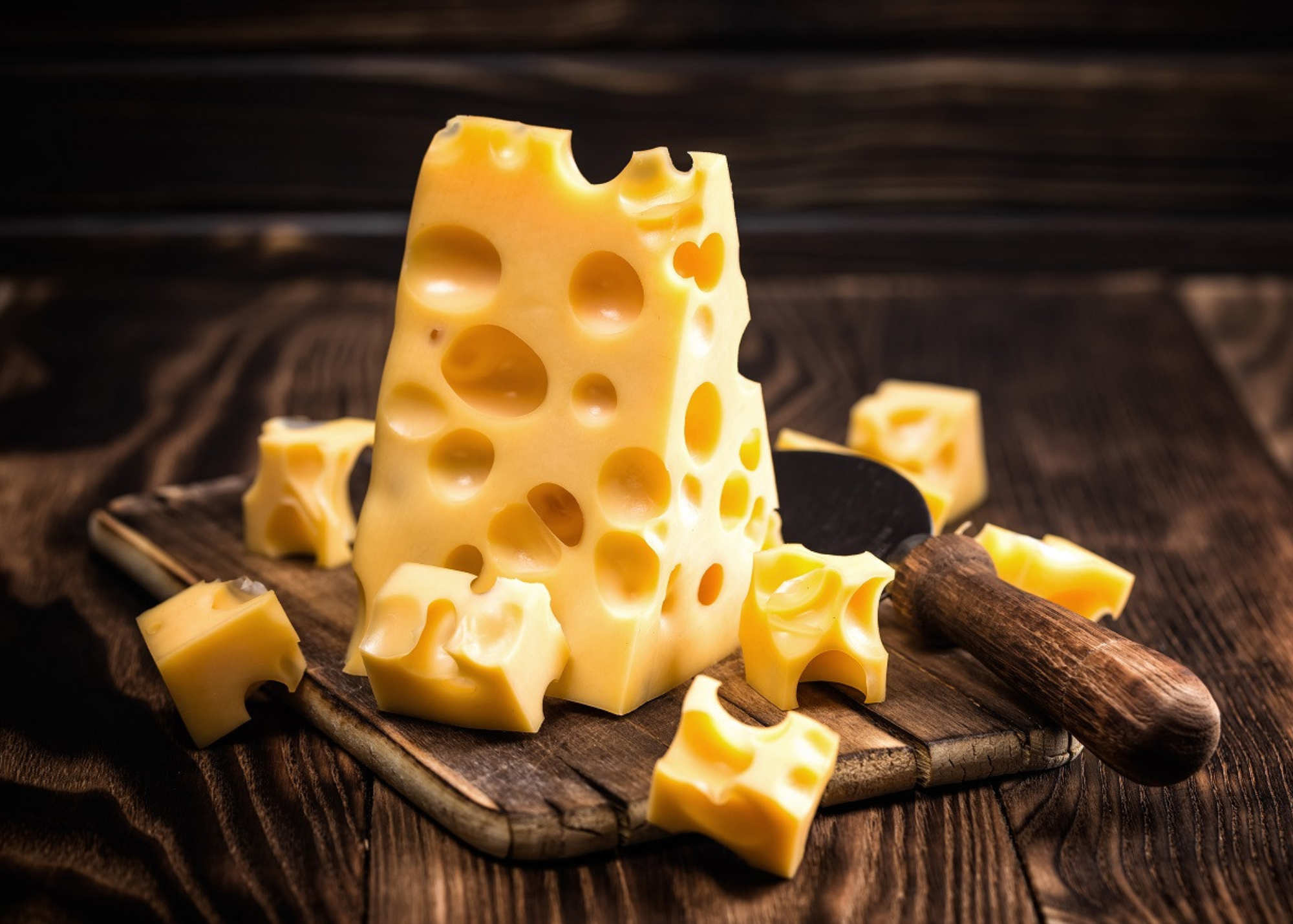 Every one of us has probably, at some point in our lives, wondered these questions: "Where do the holes in the cheese come from and what are the holes in Swiss cheese called?"

Did you also ask your parents or maybe just search on the internet?

If you notice some of the Swiss chess pieces, the holes are sometimes enormous and tiny round holes.

To answer the question above, these unique openings are called "eyes" by the cheesemakers, not "holes."

You might wonder: what could be the cause of this strange occurrence?

Eyes are found in Swiss cheese, and the unique bacterial culture known as Propionibacteria, also known as Props, that is added to the cheese is responsible for their formation.

Here are some additional interesting facts about the Swiss:

Don't Some Cheeses Have Eyes As Well?

Yes! Even though other cheeses have eyes, their eyes are caused by a different type of bacteria or by other conditions.

For example, the holes in gouda cheese can be as small as a pea.

Additionally, the presence of eyes in a variety of raw milk cheeses is not uncommon as a result of the naturally occurring bacteria.

However, the conditions do not necessarily need to be ideal for eyes to develop.

Is It True That All Swiss Cheese Has Eyes?

No, but this is considered a flaw, and when it occurs, the cheese is referred to as "blind" Swiss.

Even if the cheese lacks eyes, it will still taste like Swiss.

What Is The Maximum Size Of The Eyes In Swiss Cheese Eyes?

The eyes can be anywhere between the size of a dime and a quarter.

During the process of making cheese, most of the lactose is taken out with the whey.

The rest is then broken down completely as the cheese ages.

Cheeses that are extra-hard and hard are safe for individuals who are lactose intolerant to consume.

Cheese With Holes Not Swiss

Microorganisms often cause holes to show up in other kinds of cheese.

Cheeses like traditional Havarti, Tilsit, and Esrom have a lot of very small holes that are made by gas.

However, they do not typically refer to these holes as eyes, most likely because they are not round. 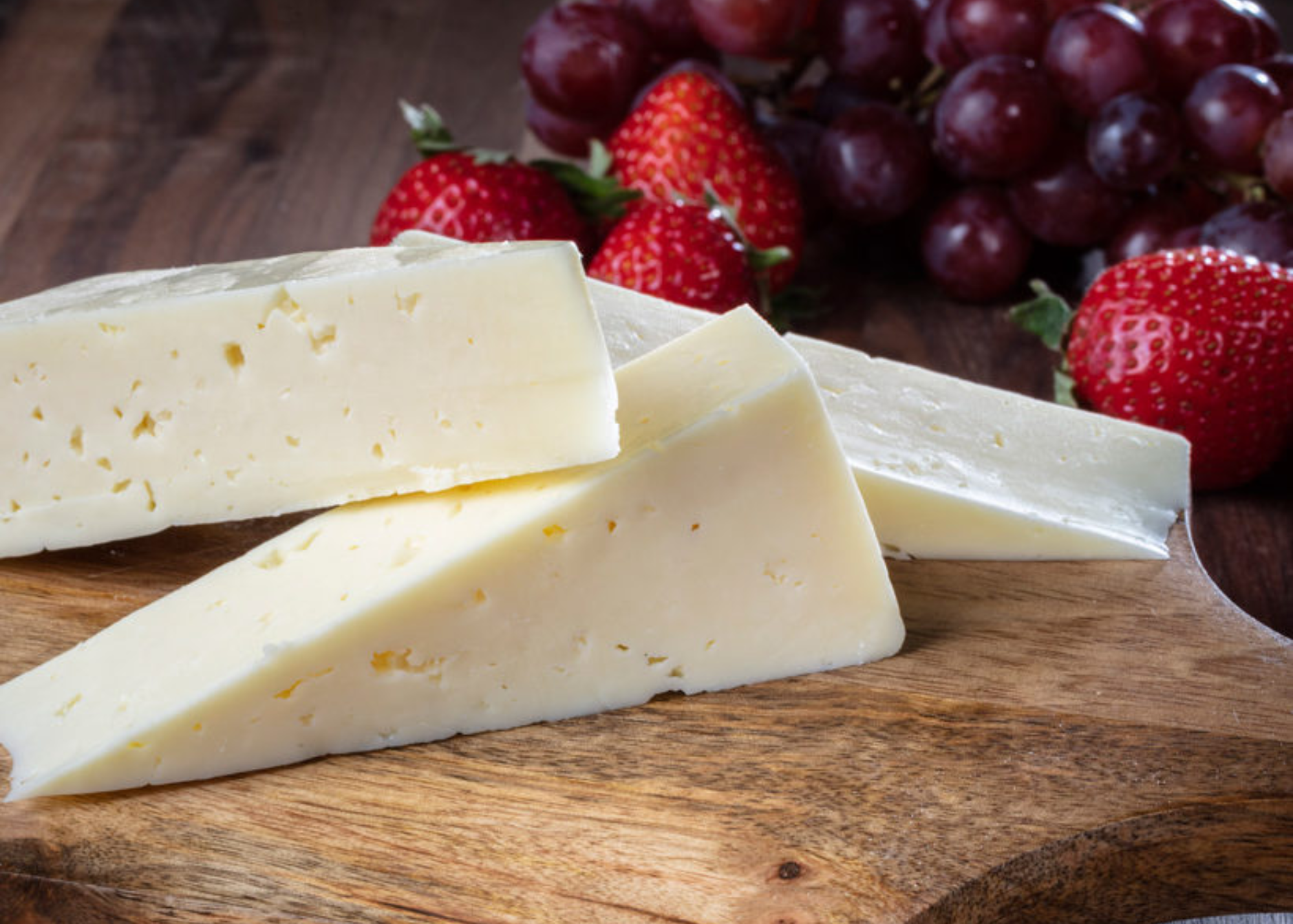 Three thick slices of havarti cheese are placed on a wooden board, with strawberries and grapes behind it

The cheese known as Havarti is made from cow's milk and has tiny holes all over it.

In the 1800s, Danish cheesemaker Hanne Nielsen was one of the first people to use modern methods to make cheese.

She introduced the world to the unique flavor of Havarti.

Havarti cheese is made by mixing high-pasteurized milk with enzymes called rennet. There, the curdling process will begin.

Molds are then made from the curds.

Finally, after three months of drying and aging, they will become the famous Havarti cheese.

Havarti generally has a sweet flavor, although some varieties are much sweeter than others.

All people enjoy Havarti cheese because of its pleasant flavor and aroma.

The flavor is aromatic and buttery, with just a touch of tang. 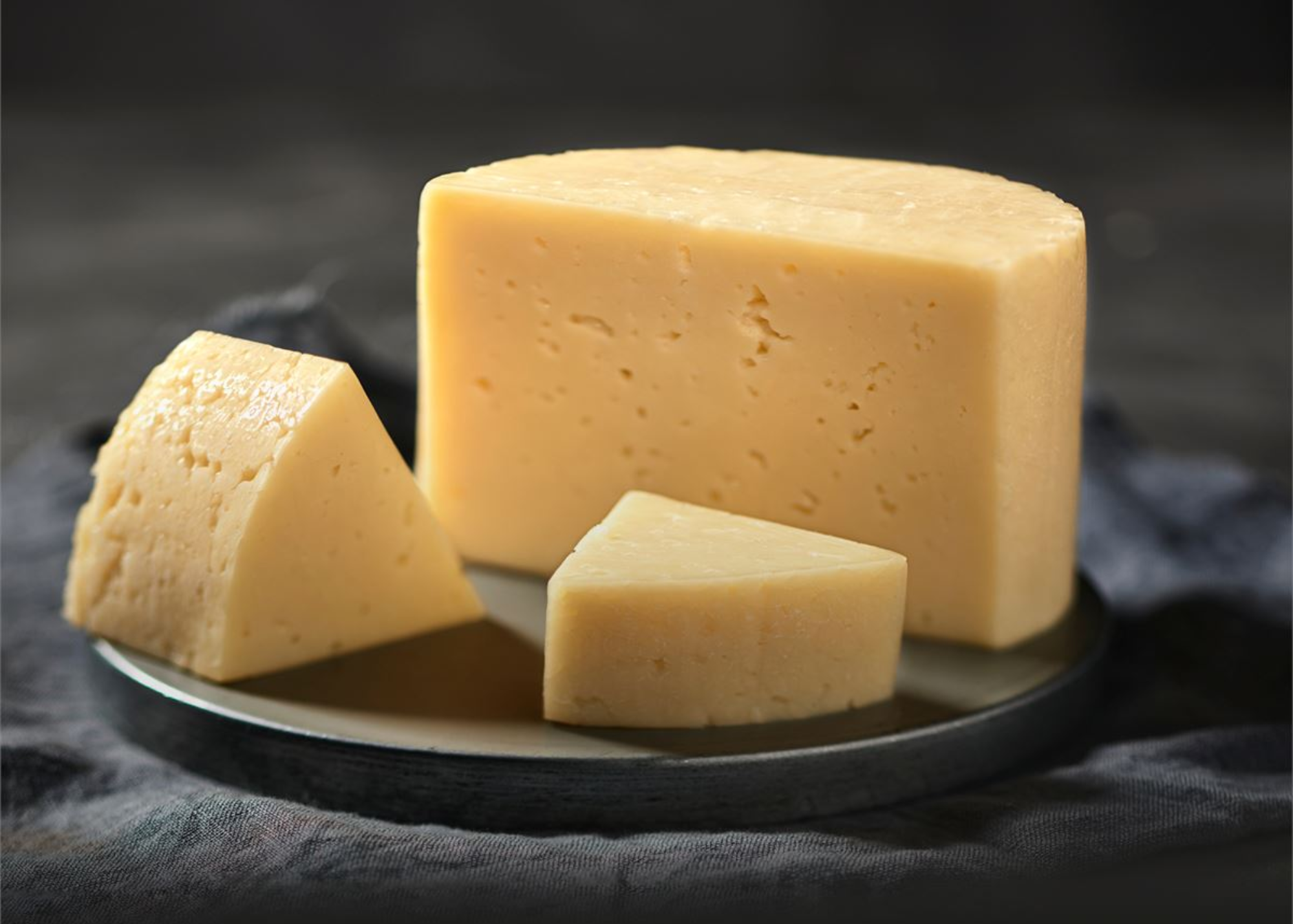 Tilsit cheese, also called Tilsiter cheese, is a pale yellow, semihard, smeared-ripened cheese that was made by Prussian-Swiss settlers in the middle of the 19th century.

Even though they were far from home and couldn't get the cheeses they were used to, these settlers missed the Gouda they had grown to love.

They were determined and loved good cheese, so they decided to try to make their favorite cheese, Gouda, again.

You can't make Dutch Gouda in a damp, moldy Prussian cellar, which is bad for them but good for us.

In their attempts to make Gouda again, they let the cheese age in a damp cellar, where molds, yeasts, and bacteria grew on it.

So, Tilsit came into being.

Because of this, the cheese got stronger and had more flavor.

The settlers named the cheese after the town in Prussia where they lived, which was called Tilsit, but some people call it "Tilsiter."

This kind of cheese is also medium-firm and has holes or cracks in it.

How Is Swiss Cheese Made

How Swiss Emmentaler Cheese Is Made | Regional Eats

At this point, the video above will show you how Swiss cheese is made.

You will see in the video that making delicious Swiss cheese calls for a high level of skill, precision, and manual dexterity.

Food Insider included the following statement in their video description:

In the US it's known as 'Swiss cheese'. Emmentaler has iconic holes in it, and it's also the world's largest cheese. We visited the Emmentaler Shaukaeserei in town of Affoltern in Emmental, east of Bern, to see how it's made. Eighty percent of the production of all Emmentaler AOP comes from this region, with 150 producers.

Some of the remarkable remarks found in the video's comment section are shown below:

"One of my favorite cheeses. Goes great with nearly everything. You can find some great locally made Swiss cheeses while traveling in Switzerland that aren't Emmentaler but just as good."

Ádrian Sánchez, one of the user posted:

In Mexico, we use other traditional methods, such as wrap the cheese in banana tree's leafs (i'm not sure if it's safe or a bad practice). It really interested me. Thank you for be inspired to do this video. Hugs!

Get The Milk, Which Is The Main Part Of Cheese

Switzerland's cheeses are made from fresh milk that farmers bring to creameries twice a day.

The quality of this milk has something to do with how the cheese turns out.

The milk is initially evaluated for quality and then filtered upon delivery.

But if the cheese isn't going to be pasteurized, the milk is either heated gently or pasteurized.

The milk is slowly heated as it is poured into the vat and stirred.

The process of coagulation starts when the lactic acid bacteria and rennet are added.

When this happens, a gelatinous substance is made.

Now they bring out the cheese harp, which is used to cut the curd into small pieces.

The size of these pieces of curd determines what kind of cheese they will turn into.

The curds are moved around and heated up.

The higher the temperature, the harder the cheese will be.

So, the cheese gets more and more solid.

Once the cheese is as firm as you want it to be, it is poured into a mold.

The whey can get out of the mold through the holes in the bottom.

Also, the whole cheese is pressed to get rid of even more liquid.

The next step is the brine bath. The cheese that is floating in the brine soaks up the salt and gives off the whey.

Over time, the rind forms and the flavor of the cheese get stronger.

During its time in the cellar, the cheese goes through a number of changes: the rind forms, the inside changes color, holes form, and the cheese gets firmer.

The cheese is often made better by rubbing it with herbs, cider, or white wine.

In the last step, the cheese is put through a series of tests.

They look at how the holes form, how good the cheese is, how it tastes, and how it looks on the outside.

The cheese will then be ready to sell.

Why Does Swiss Cheese Have Holes Brainly

One of the Brainly user named bithi9907 asks the question: "Why does Swiss cheese have big holes?"

Here is an example of a verified answer that you can find on Brainly website:

That bacteria, more specifically P. shermani, releases carbon dioxide when it consumes the lactic acid and forms bubbles. The bubbles don't just disappear, they form little air pockets, resulting in the holes of the Swiss cheese.

Here's a video showing the scientific explanation of why there are holes in swiss cheese products:

Why Does Swiss Cheese Have Holes?

The central idea presented in the video is that the holes in Swiss cheese are caused by a by-product of some of the microbes that are added to the milk during the manufacturing process.

To be more specific, the production of Swiss cheese typically calls for the use of three primary types of bacteria.

These three components—Streptococcus thermophilus, Lactobacillus helveticus, and Propionibacterium shermanii—are subject to a degree of variability depending on the manufacturer.

Why Are The Holes In Swiss Cheese?

Agroscope, a Swiss agricultural institute, believes that the holes in Swiss cheese are caused by tiny specks of hay.

When cheese is made in barns using buckets, hay particulates are likely to get into the buckets of collected milk, causing holes to form in the cheese as it ages.

What Is Swiss Cheese Without Holes Called?

If you enjoy cheese but want to limit your calorie and fat intake, we recommend mozzarella. This cheese is also lower in sodium.

Manchego is a Spanish sheep's milk cheese with a low lactose content, making it a good choice for those who are lactose intolerant.

Goat cheese is high in selenium, a nutrient that aids in the prevention of inflammation in the body.

This cheese is also low in lactose, making it an excellent choice for those who are lactose intolerant.

Swiss cheese is made by fermenting cow's milk with three different types of bacteria, which results in the cheese's signature holes, odor, texture, and flavor.

Don't be too disgusted by that idea, as some bacteria are actually beneficial to your health.

That actually works with your body's immune system and is part of the reason why cheese has such a delicious flavor.

As you may already know, the term "eyes" refers to the holes in Swiss cheese.

Furthermore, the eyes that you may see in this type of cheese are caused by the Propionibacterium freudenreichii bacteria, not by the cheesemakers.