When Price And Apple's Specs Met 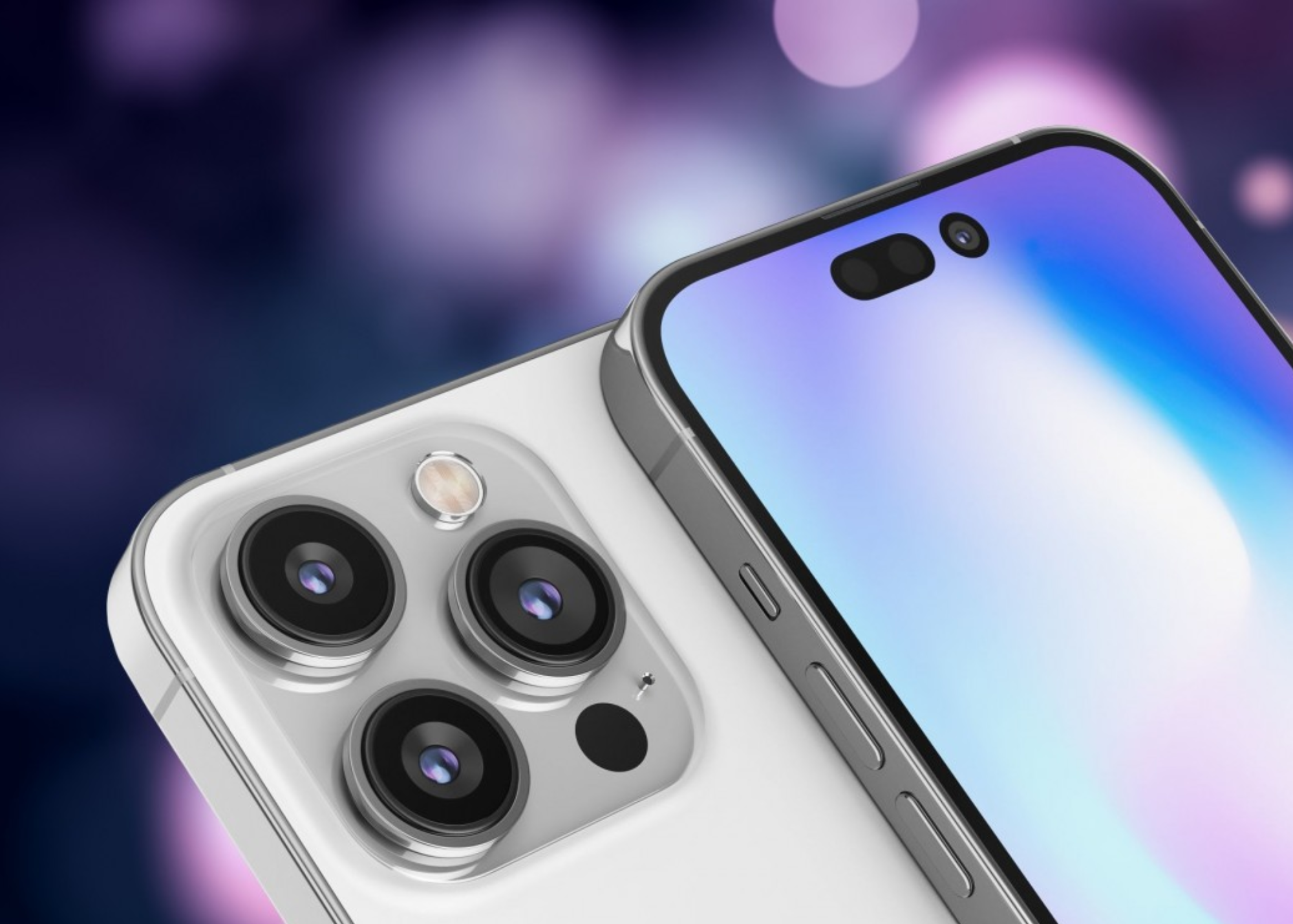 When price and Apple's specs met, numerous Apple users posted their hilarious thoughts on it. As usual, Apple's price and features have become viral jokes. See what you think of the brand's products after reading some of the hilarious reviews people have left on social media in this article.

Before going into it, let's admit that the vast hardware and software configuration options are greatly appreciated by the public. The Samsung Galaxy S10 and the Google Pixel 3 are especially good for people who want the most beautiful design and the best camera, respectively.

However, when asked which smartphone to purchase, iPhones are typically recommended over Android devices by close friends and family. One thing is certain: iPhones are faster than Android phones. For example, some have discovered that the newest iPhones can transcode video more quickly than the Galaxy S10 can.

The iPhone XS only needed 39 seconds, while the Galaxy S10 needed almost 2.5 minutes. Because of this speed boost, even augmented reality apps that use a lot of resources can be used without lagging.

If you're interested in the advantages of an Apple phone over an Android phone, you can read about them online. However, we can't say that there is something perfect in an imperfect human product design. Meaning, Apple phones have flaws, and many people are complaining about the company's latest design.

New Models Of Apple Is Now 'The Talk Of The Town'

All of the latest variations come with superior cameras, improved battery life, a sleeker display, and a satellite-based SOS in case of an emergency. Memes about the new phone are all over Twitter as people react to it and, as always, laugh at the fact that it looks exactly the same as the old model. 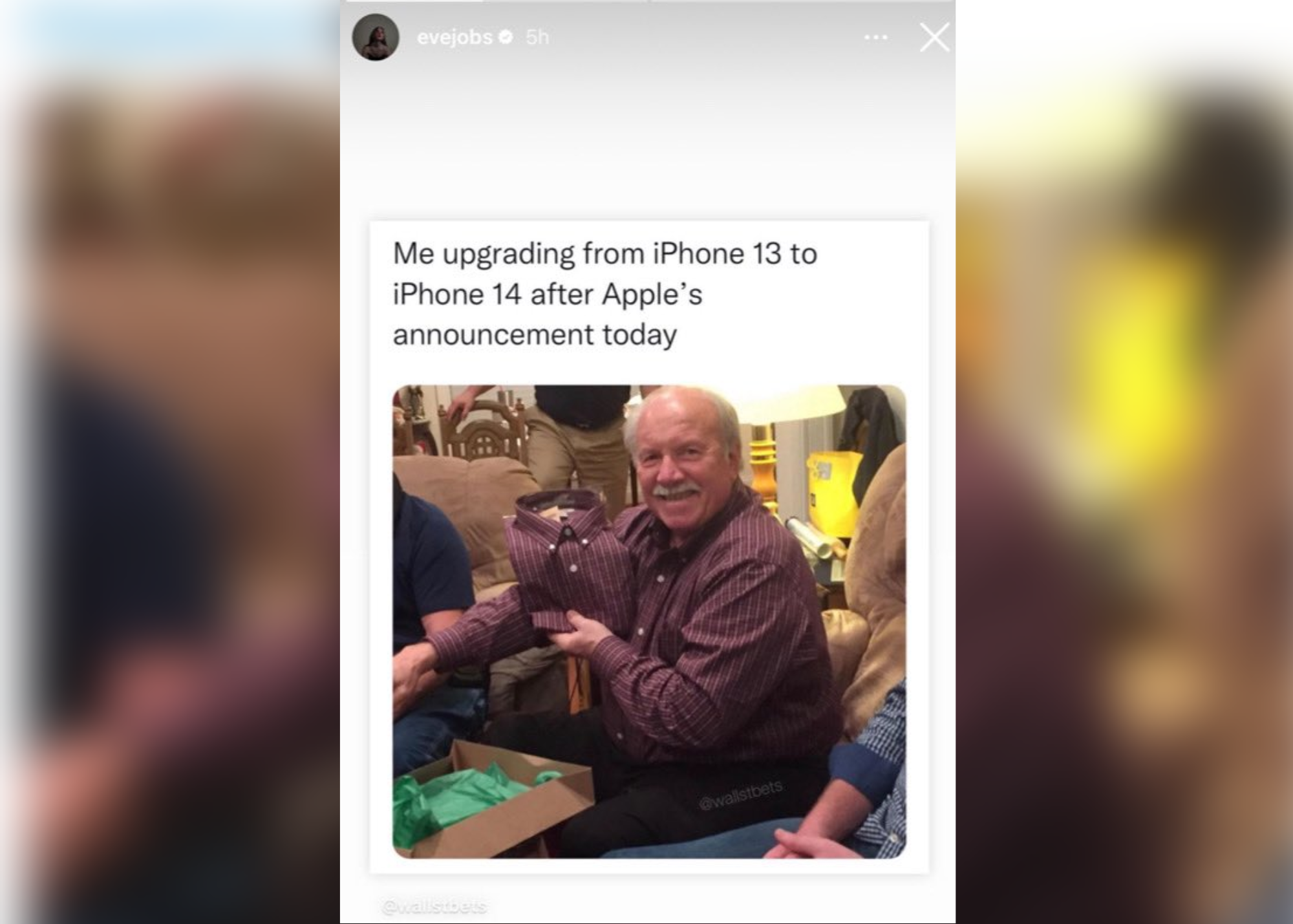 This meme is still generating funny reactions on Instagram. Eve Jobs, the daughter of Apple's founder, took part in the meme fest and shared a funny meme making fun of Apple's new launch. She is Steve Job's daughter.

Eve used Instagram to share a meme that was going around on her story. The meme is a picture of a man posing with a shirt that looks exactly like the one he is wearing in the picture.

She captioned the picture: "Me upgrading from iPhone 13 to iPhone 14 after Apple's announcement today." When comparing the iPhone 14 and 13, it is clear that there are many similarities between the two in terms of design and feel.

The 6.1-inch screen size, the bezel-less sides, and the rear-facing dual-camera setup are all carried over. However, there are some noteworthy new additions to the iPhone 14 Pro series. 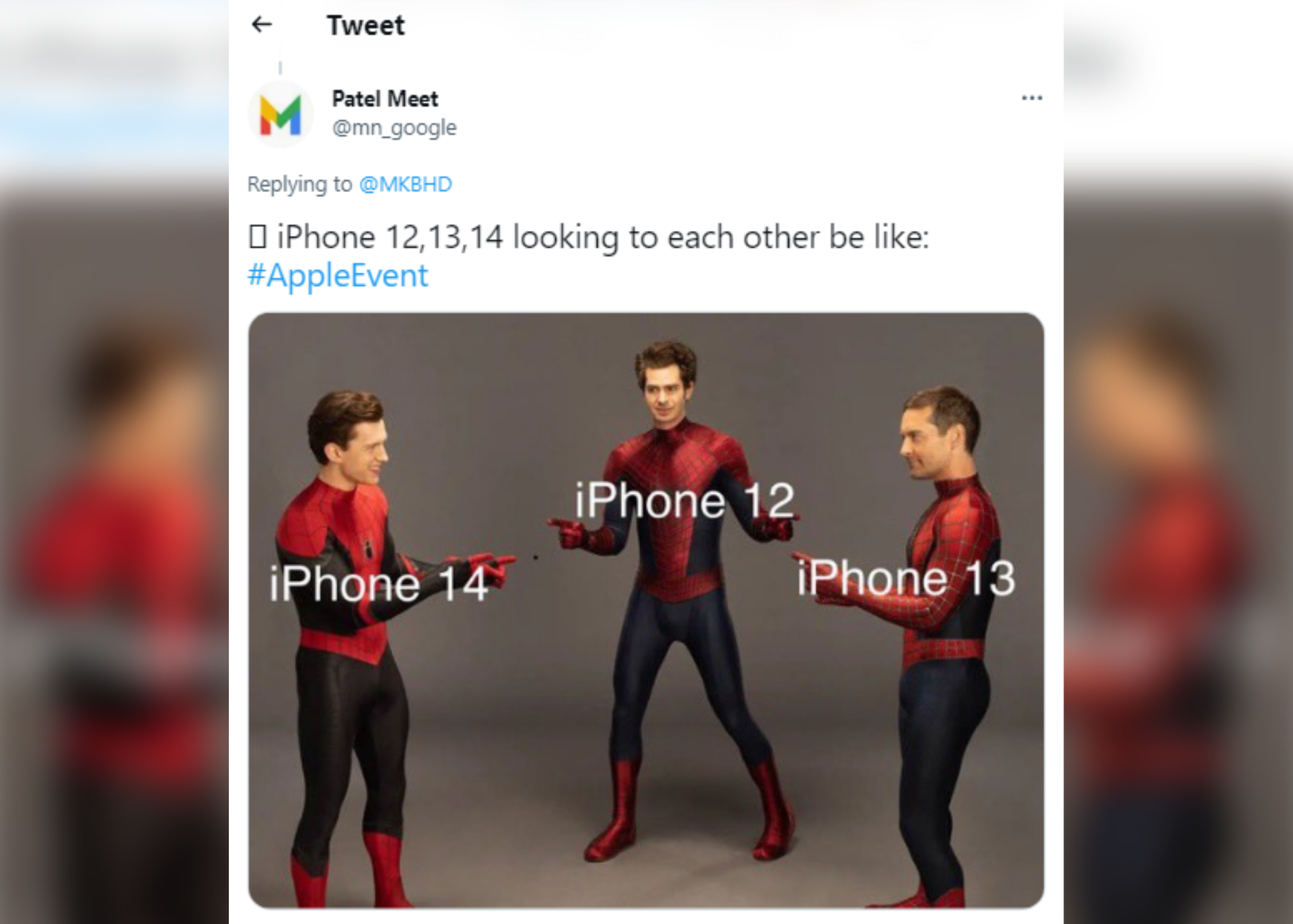 Three spiderman pointing to each other

Someone shared a picture on social media that depicted three spidermen from different universes gesturing towards each other. The implication was that the new versions of the iPhone are not significantly different from the older versions.The caption that was used when sharing the meme read, "iPhone 12,13,14 looking at each other be like: #AppleEvent."

This tweet received 236 likes and 31 tweets in response. But, one comment said, "I mean this years pro is pretty good tho." 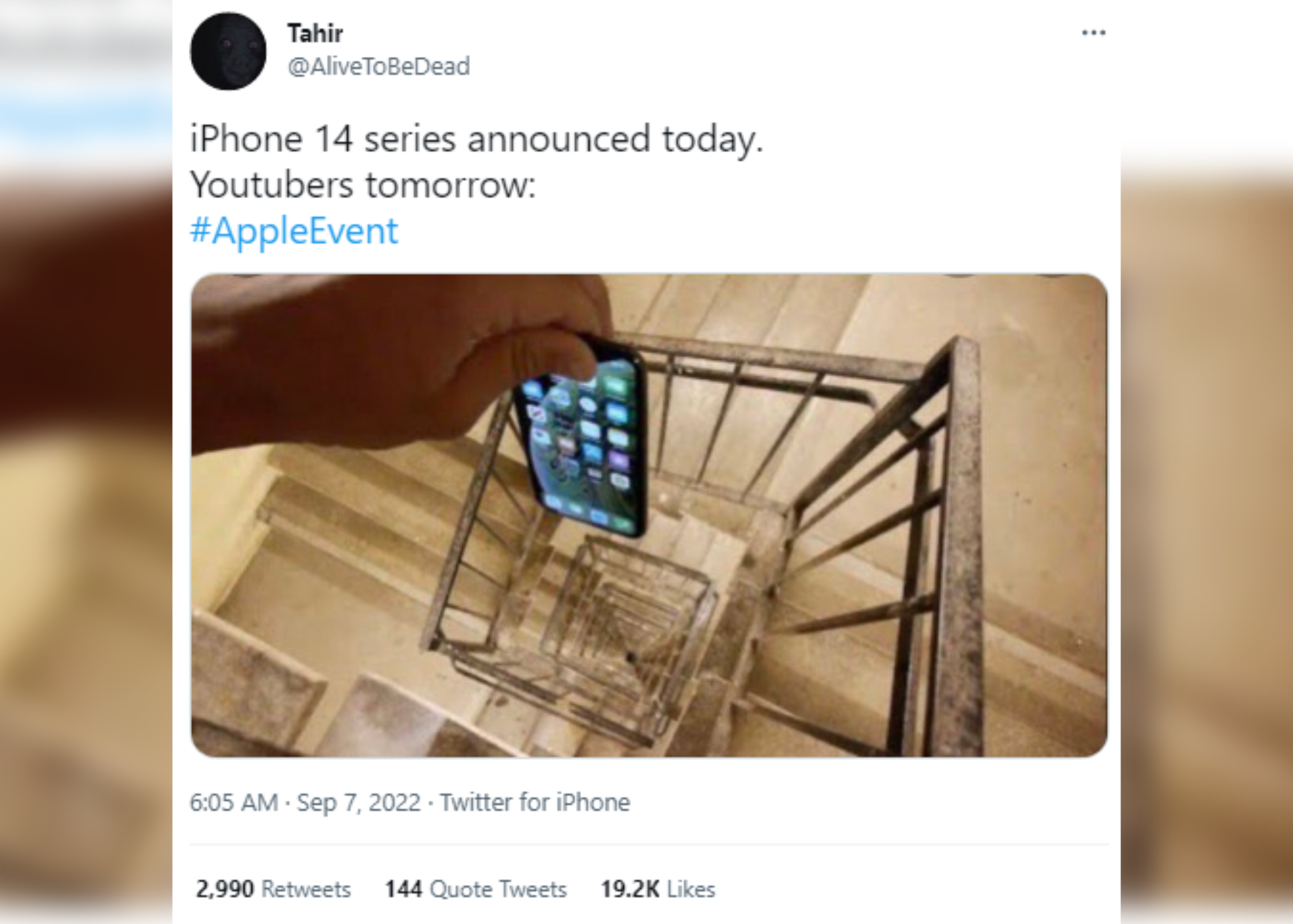 A phone that is about to drop from a considerable height

A user tweeted a picture of an iPhone that appears to be about to be dropped from a considerable height, in reference to YouTubers who intentionally damage expensive items like iPhones and iMacs for the purpose of gaining views on their channels. Since the base model of the iPhone 14 is so pricey, we can see why you would have such a reaction. The post was captioned, "Youtubers tomorrow: iPhone 14 series announced today. #AppleEvent."

Most people are likely to be shocked by the price range, and with good reason. Almost 3,000 people retweeted this, and an additional 144 people quoted it, for a total of 19,200 likes. 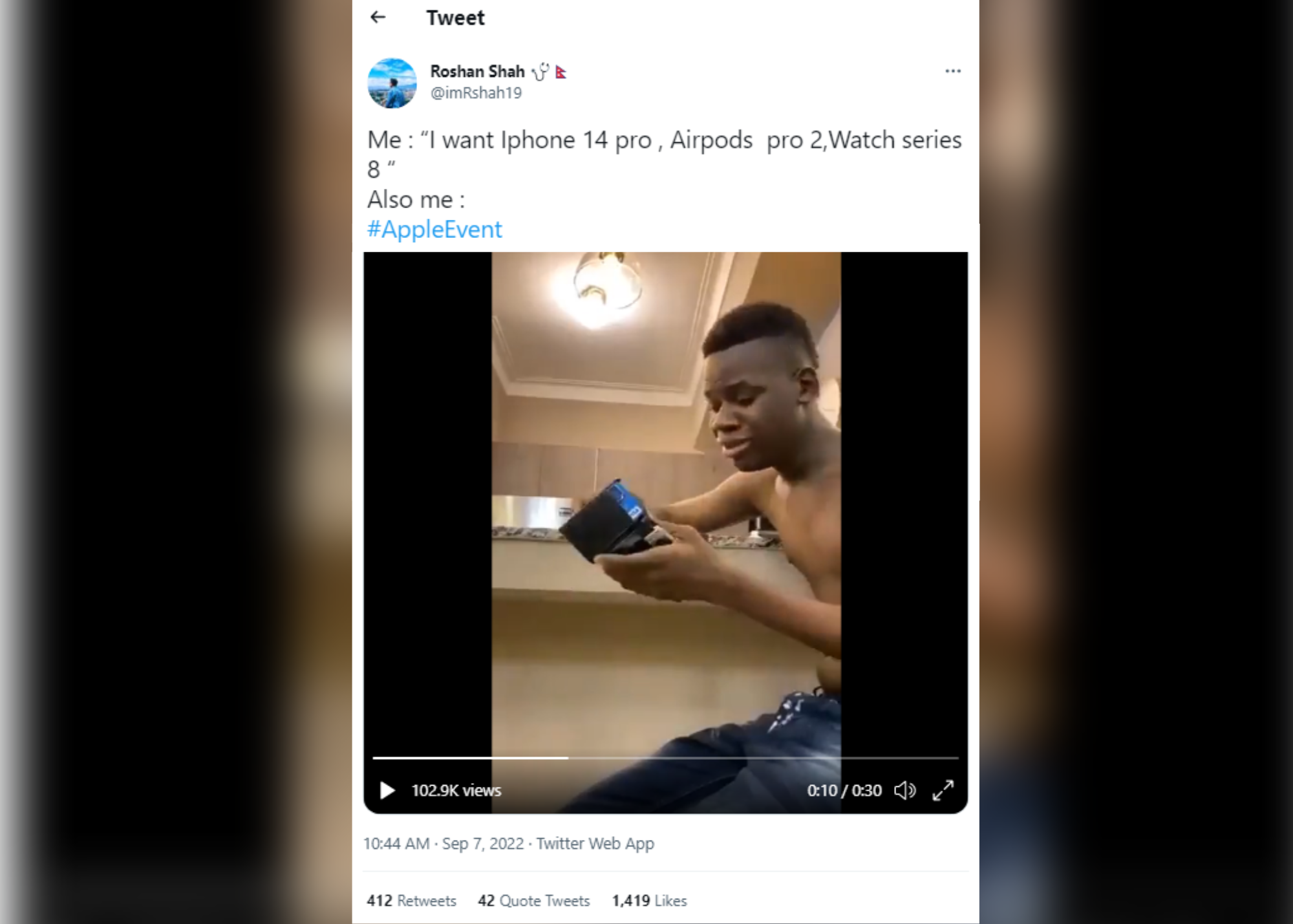 A black man is frustrated while looking his wallet

Someone shared a funny post about how they wanted to buy the new iPhone but couldn't because they didn't have enough money. He showed a video of a guy looking at his wallet and crying because he couldn't afford to buy an iPhone. "Me: 'I want an iPhone 14 Pro, AirPods Pro 2, and Watch Series 8', also me: # AppleEvent," the caption read. 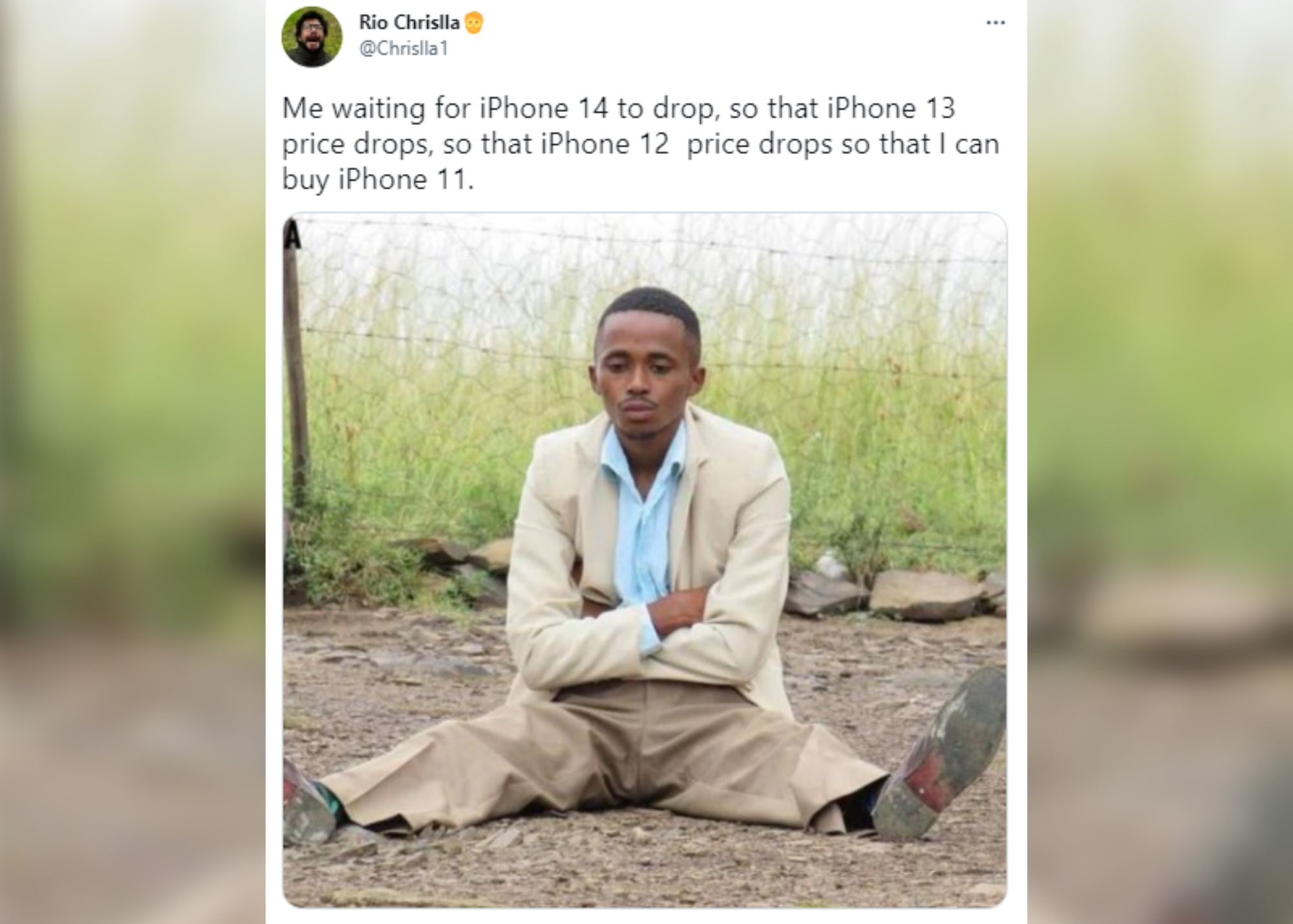 iPhone 14 PLUS VS iPhone 14 Pro Max Review of Specs!

Other specifications are discussed below:

The iPhone 14's screen has rounded corners that are part of a beautiful curved design. These corners are inside a standard rectangle. When the screen is laid out in a standard square shape, it is 6.06 inches diagonally.

What's Different About The IPhone 14?

Despite what many reviewers and customers have said, the iPhone 14 does offer some new and improved hardware and features. The internal hardware has been upgraded with 6 GB of RAM, a 5-core GPU, Bluetooth 5.3, and improved cameras. Color options now include (product) RED, blue, purple, midnight, and starlight.

The screen size, 5G support, A15 Bionic chip, and overall design of the iPhone 13 and iPhone 14 are identical. There are, however, a few big changes to the iPhone 14. It has a new GPU core, an Emergency SOS that works through satellites, a Photonic Engine, and an Action Mode.

When Did The IPhone 14 Come Out?

It's a cheaper alternative to the more expensive and high-end iPhone 14 Pro Max. It has the same hardware as that model, but its 6.7-inch screen is bigger.

We've all seen the iPhone memes that poke fun at the product's steep price tag and design. So, when price and Apple's specs met, hilarious meme fest has been triggered across various online communities with the release of the iPhone 14 series on September 7 at Apple's "Far Out" event.

The iPhone 14 Pro looks very different from the iPhone 13 Pro, thanks to the new A16 Bionic processor and the distinctive notch. Memes have been created on the internet mocking the new model for being visually identical to the last one. A limited form of satellite communication has also been integrated into new iPhones by Apple, allowing users to send an SOS even when they are disconnected from the internet and a dish is not in use.

Even though you won't be able to use regular means of contact like data, phone, or text, emergency services will be alerted to your location and situation. The release of iOS 16 is scheduled for September 12.