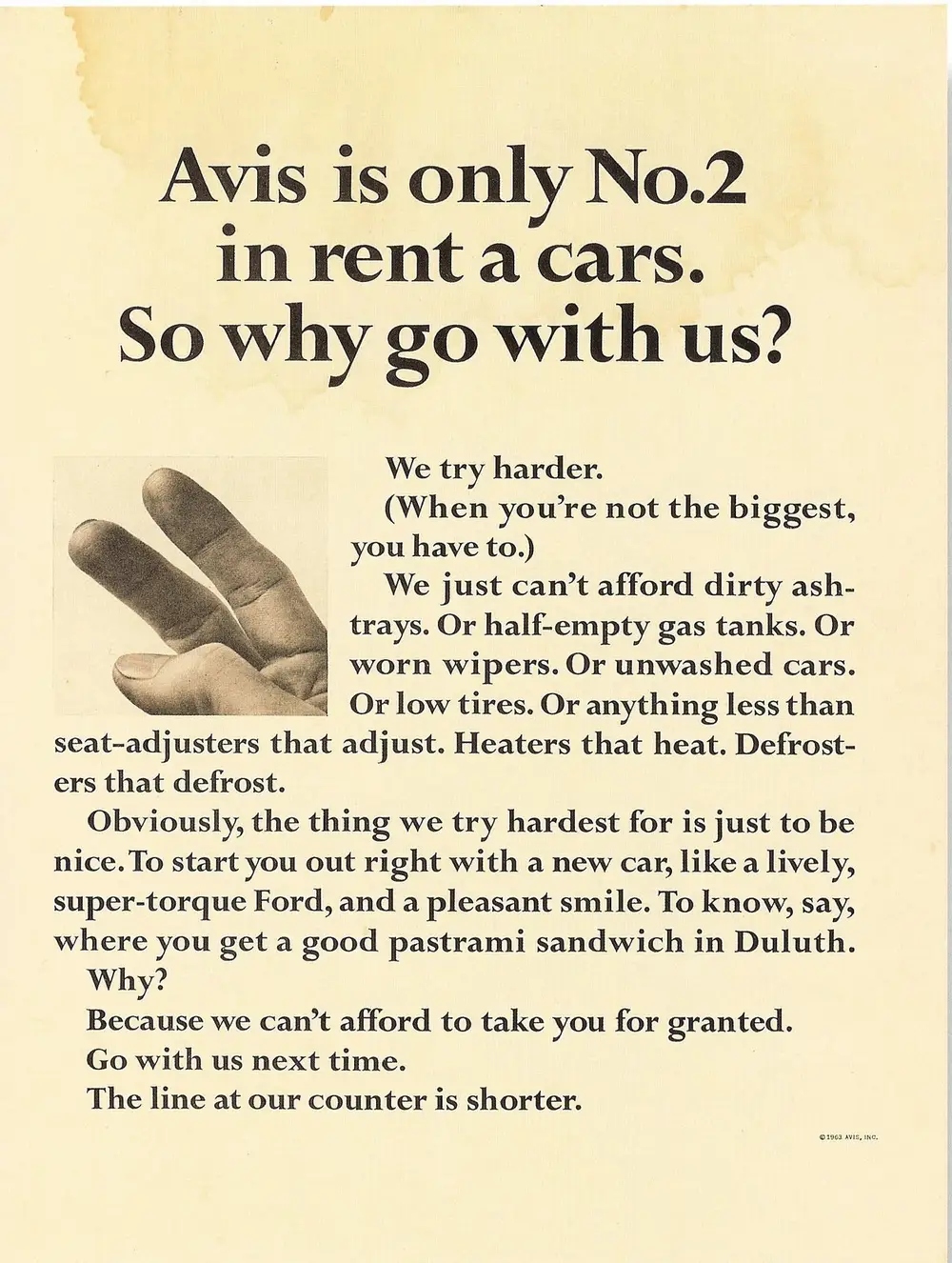 The advertising campaign's message Of Avis car rental company was crystal clear: despite the fact that Hertz was the dominant force in the rental vehicle market, Avis was the underdog and that made it superior.

Being everything to everyone at first is the most common rookie error made by many new businesses. In other words, attempting to excel in every area of business, including price, quality, service, etc. This, however, is a grave error because no one brand can excel at all things.

As the saying goes, "when you attempt to be known for everything, you don’t become known for anything."

Businesses should instead concentrate on one standout feature of their product or service that they can then promote to their target market as part of their advertising campaigns.

Who said a brand needed to hold the top spot to persuade clients to switch to them? With their marketing campaign, Avis skillfully demonstrated the contrary by admitting they weren't the industry leader in terms of car rentals but yet going above and beyond to help their clients.

Which car rental company used the slogan "We're number two. We try harder"? It was Avis. While Hertz was slouching in first place, Avis was attempting to overtake it by providing better service than its main rival.

As workers started to "try harder," the corporate culture at Avis swiftly changed to reflect these higher demands.

When Avis launched their "Number 2" campaign, they were having trouble staying in business since Hertz, the leading car rental company at the time, controlled a large portion of the market.

What benefit did Avis' USP provide for the business? It increased its market share from 11% to a staggering 35%! Talk about transforming a negative into a positive. This demonstrates that customers place the highest value on openness and sincerity.

Which Car Rental Company Has The Slogan We Try Harder?

Avis car rental company has the slogan, "We Try Harder".

What Is The Slogan For Avis Car Rental?

The slogan for Avis car rental is "We Try Harder."

The company that owns Avis is Avis Budget Group, Inc. (NASDAQ: CAR), which also manages and licenses the brand internationally. Warren Avis started Avis in 1946. In 1954, he gave up his ownership of the company. Avis was the first car rental company to offer services at airports.

Over the following few years, it opened branches around the country, growing to be the second-largest car rental firm in the nation by 1953. In 1962, the company's "We Try Harder" tagline was introduced.

The corporation wanted to highlight Avis' position as the second-largest automobile rental company in the US while simultaneously criticizing bigger rival Hertz Corporation. Over 50 years were spent using the catchphrase.