Whose Name Did Johnny Depp Have Tattooed On His Arm In 1990? 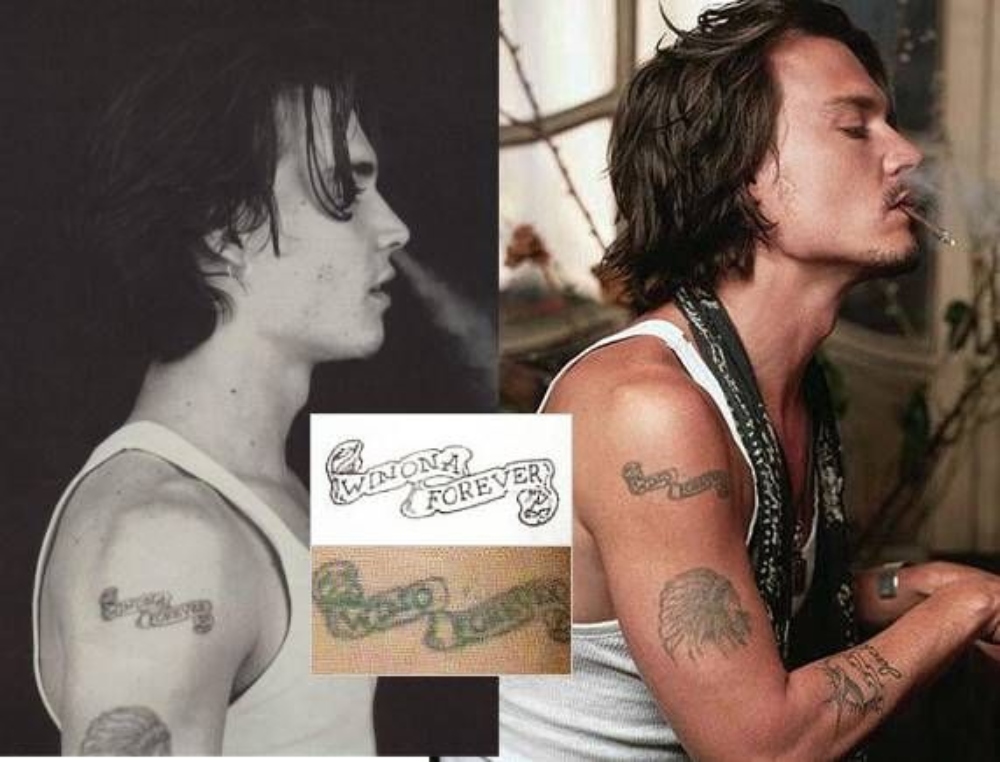 Whose name did Johnny Depp have tattooed on his arm in 1990? It was Winona Ryder, his ex-girlfriend. Here are all the details.

Whose name did Johnny Depp have tattooed on his arm in 1990? After just five months of dating, the couple, Johny Depp and Winona Ryder got engaged in classic Hollywood style.

In 1990, Depp soon had "Winona Forever" tattooed on his bicep after their engagement. Unfortunately, the two broke up in 1993 after a quick four-year engagement.

What do you do when the person whose name is tattooed on your body breaks up with you? Of course, you change it! Depp did just that in 1994, changing the banner tattoo "Winona Forever" to "Wino Forever" rather than deleting it.

People are not precisely clear if Ryder goes by the nickname "Wino" or if the abbreviation has another meaning for the star of The Lone Ranger.

According to Depp, his tattoos "are like a notebook." In reference to the well-known "Winona Forever" tattoo, he has noted that it would be dishonest to remove the ink because doing so would be equivalent to denying the existence of his relationship with Ryder.

Johnny Depp is without a doubt one of the most reliable performers of our time, as any Depphead would attest. In addition to his compelling on-screen performance, the actor's tattoos, which are said to number in the hundreds, have long piqued fans' interest!

Johnny Depp talked about his many tattoos in 1995 and stated that each one represented a different area of his life.

Among the many tattoos the actor has, these are just a few.

The upper right arm of Johnny bears his first tattoo, "Cherokee Tribe," which he obtained when he was 17 years old. The tattoo was made to honor his Native American ancestry because his great-grandmother was a Cherokee.

The name of Johnny Depp's mother, Betty Sue, who passed away on May 20, 2016, following a protracted illness, is inked in a heart on his left arm. The tattoo, however, was created in 1988, a long time before she passed away.

Depp's right arm has a tattoo of his Jack Sparrow character from Pirates of the Caribbean.

According to rumors, Depp's right leg is inscribed with the phrases "death is certain" and a skull and crossbones.

Does Johnny Still Have A Winona Forever Tattoo?

No. In 1990, Depp inked a dedication tattoo "Winona Forever" of his then-fiancée, Winona Ryder, on the upper right arm of his body. However, after the couple's 1993 breakup, Depp changed the tattoo to read "Wino Forever."

Why Did Johnny Depp Get A Winona Tattoo?

Depp had "Winona Forever" tattooed on his bicep in what you can only assume to be the height of his infatuation because it was "love at first sight" for both.

Why Did Johnny Change His Tattoo?

Because of his ex-wife, Amber Heard, Johnny Depp revealed in court that he had the tattoo "Winona Forever" changed to "Wino Forever."

Whose name did Johnny Depp have tattooed on his arm in 1990? Perhaps Johnny's most well-known tattoo is a tribute to his ex-girlfriend Winona Ryder, with whom he began dating in 1990. However, they didn't last, and they broke up.