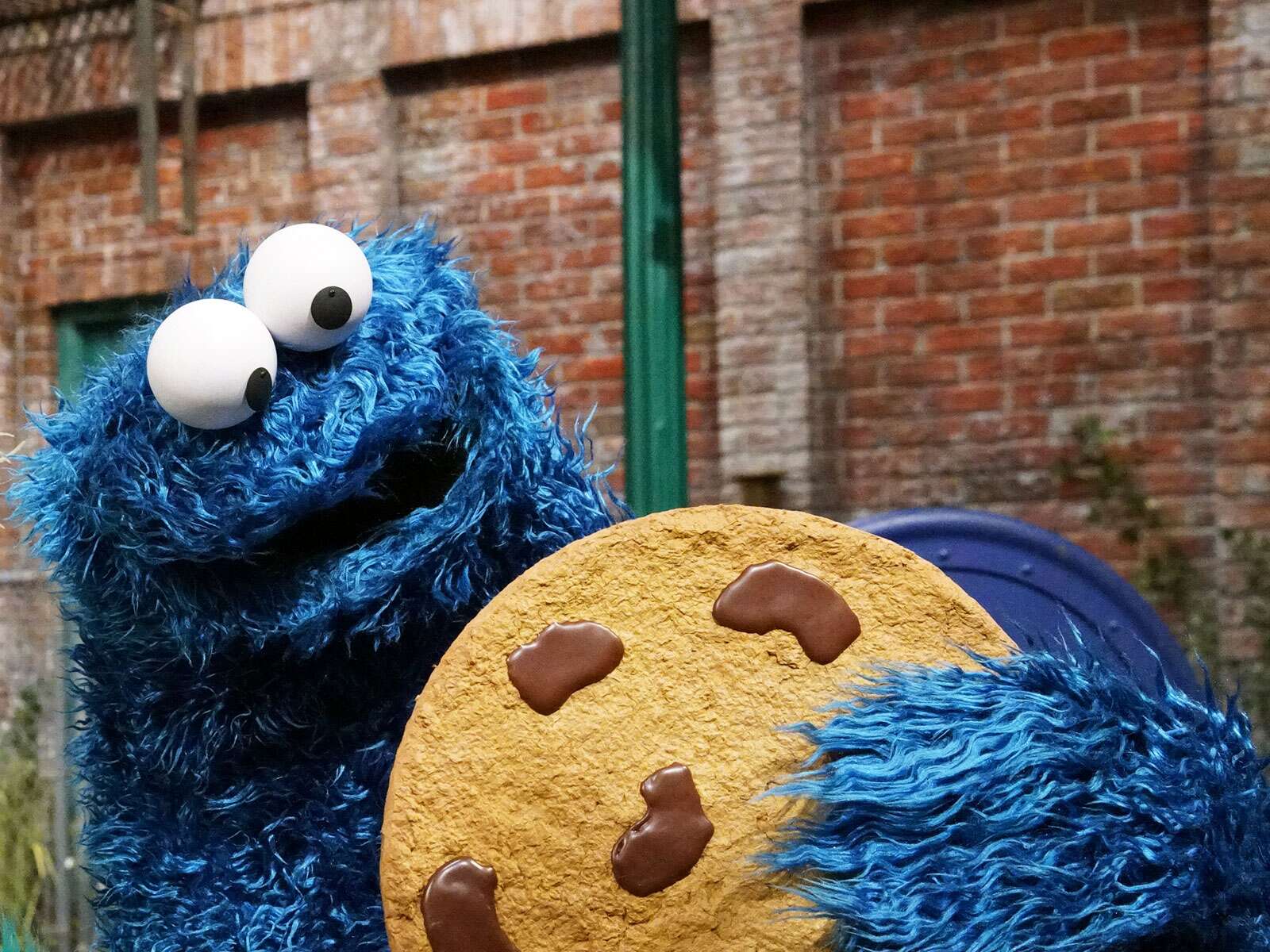 The blue Muppet known as Cookie Monster can be seen on the long-running children's television show Sesame Street, which airs on both PBS and HBO.

"Me want cookie!" is a well-known example of one of his many famous eating catchphrases.

Memes like "without cookies I'm just a monster" seem to be able to quickly spread around the internet due to their widespread popularity.

The Cookie Monster is a cartoon character with a never-ending craving for cookies. He has blue fur all over his body and a pair of googly eyes.

As his name suggests, he eats almost anything, even things that aren't usually edible. However, cookies, especially chocolate cookies, are his favorite food. 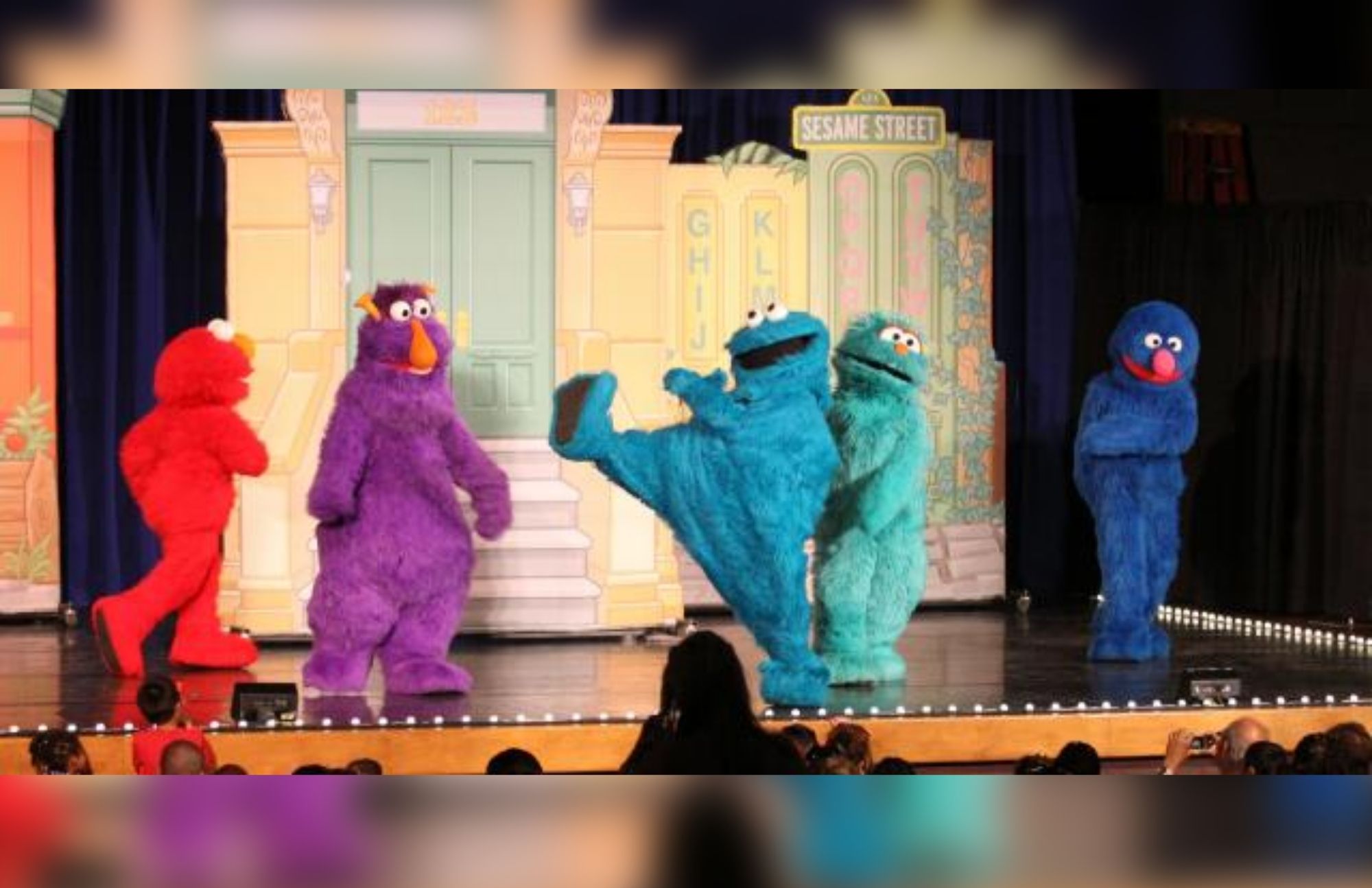 It would be inappropriate for us to discuss Cookie Monster if we didn't even know what his real name was, wouldn't it?

During an episode of Sesame Street that aired in 2004, Cookie Monster stated in a song that his name was Sid before he ever consumed his very first cookie.

The Cookie Monster grew from a monster designed by Jim Henson in 1966 for a General Foods Canada commercial.

Along with two other monsters, this figure was known as the Wheel Stealer and advertised the snack foods Wheels, Crowns, and Flutes.

The Wheel Stealer evolved further after appearing in an IBM ad and on The Ed Sullivan Show in 1967.

After losing his teeth, he eventually made his way to Sesame Street. By the second season, he had developed a fondness for cookies and earned the moniker "Cookie Monster." 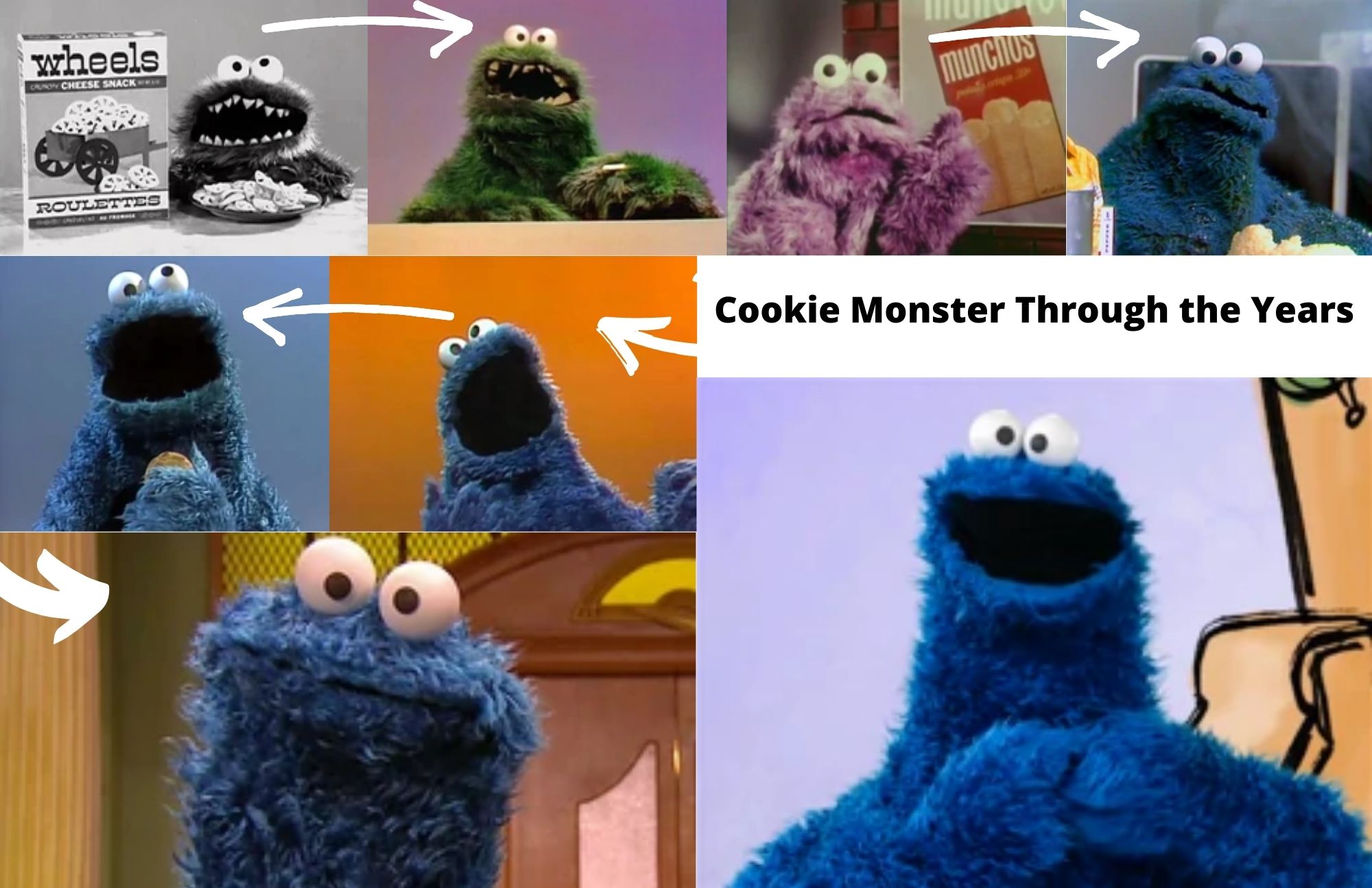 The changes undergone by cookie monster over the years

In 1996, Cookie Monster was once referred to as the Wheel-Stealer in an advertisement that was never broadcast by General Foods for their Wheels, Flutes, and Crowns snacks.

In 1967, the cookie monster's teeth were still in place, and his fur was dark green with a few brown-black patches.

In Munchos commercials in 1969, a version of the Wheel Stealer puppet that looks smaller and younger is turned into Arnold.

During the first season of Sesame Street, the monster puppet becomes Cookie Monster when he grows back to his normal size and gets his signature blue fur.

This puppet is loose and flappy, which gives him much more expression, and his fur is rougher.

Years later, the puppet would be re-used as the Apple Monster.

At the end of the second season, a better Cookie puppet with a squarer jaw is made.

His eyes are now higher on his head, which means they are farther from his mouth.

Cookie's googly pupils have been a little lower for a few seasons, giving the impression that he's sometimes looking down.

This puppet is also used for Cookie Monster's mom in "Me Gotta Be Blue" and an angel in "Don't Eat the Pictures."

The cookie has been remade to look like the old puppet, but with brighter blue shag fur.

Cookie's googly pupils have shrunk overall, and his fur has become fluffier and lighter in color.

In episodes of The Furchester Hotel, a new Cookie puppet with a more round mouth and longer, frizzier fur initially appears.

Cookie makes his first appearance in season 46. He has darker blue fur and a squarer mouth than the puppet he replaces.

Almost everyone uses social media these days, whether they are young or old, male or female.

Cookie Monster is the same way. Could we say he has a lot of "influence"?

An example of this is the picture below. 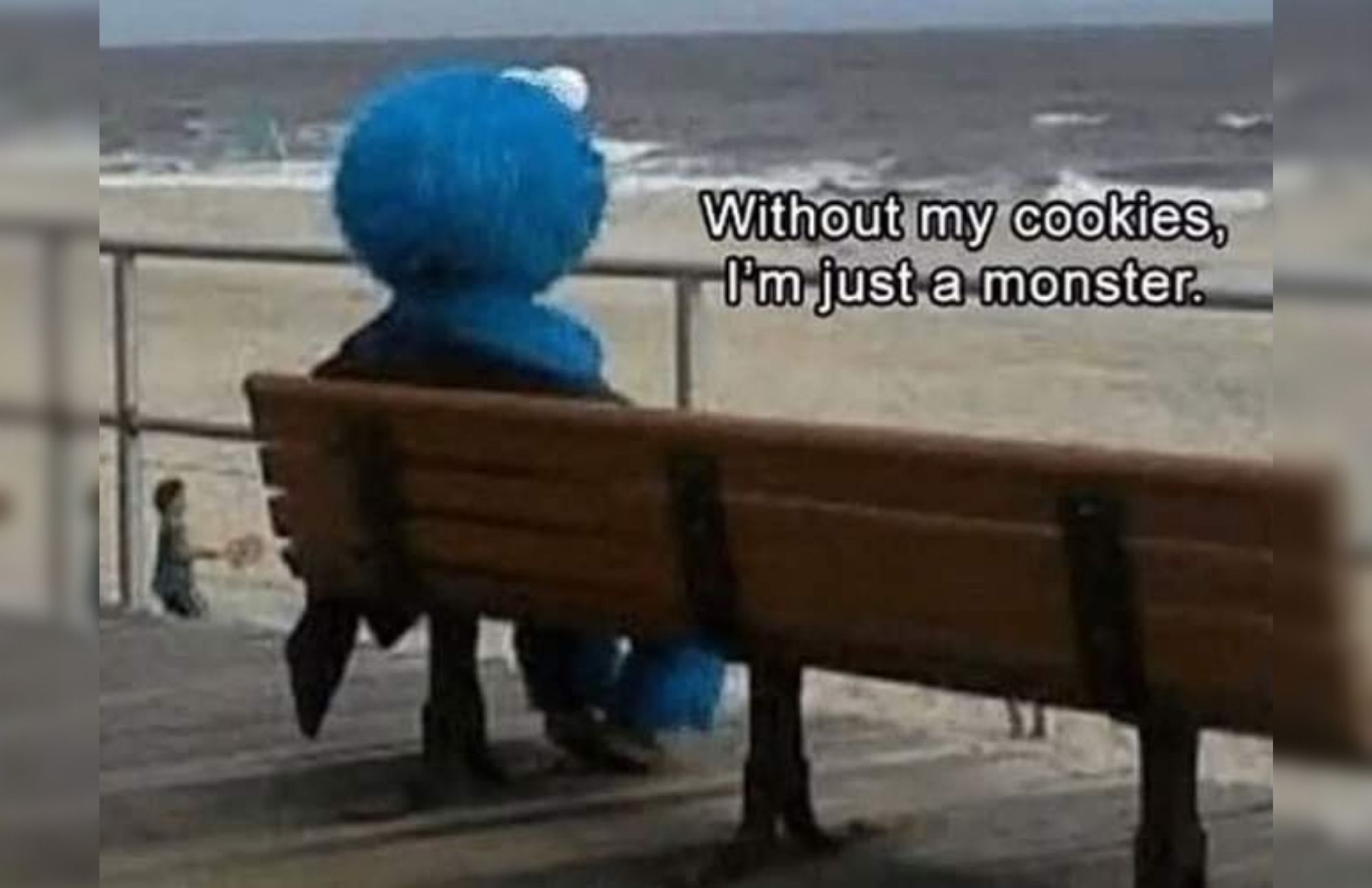 A blue muppet is sitting in a public chair and in front of it is a beach with the meme saying: "without cookies, I'm just a monster"

There is a blue muppet sitting in a public chair, and in front of it there is a beach with a meme that reads, "without cookies, I'm just a monster." 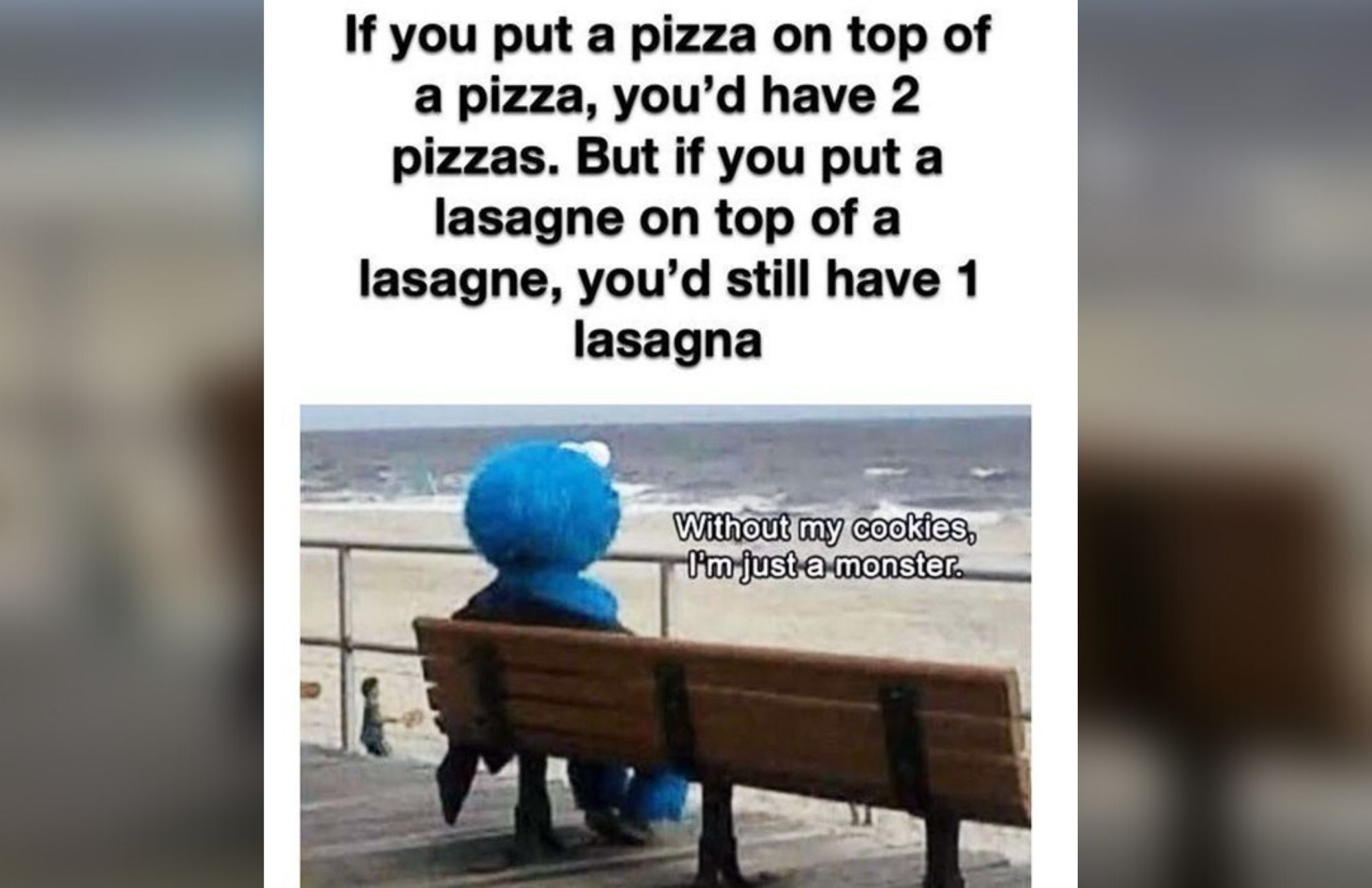 The meme has statements that reads: "If you put pizza on top of the pizza, you'd have 2 pizzas. But if you put a lasagne on top of the lasagne, you'd still have 1 lasagna." 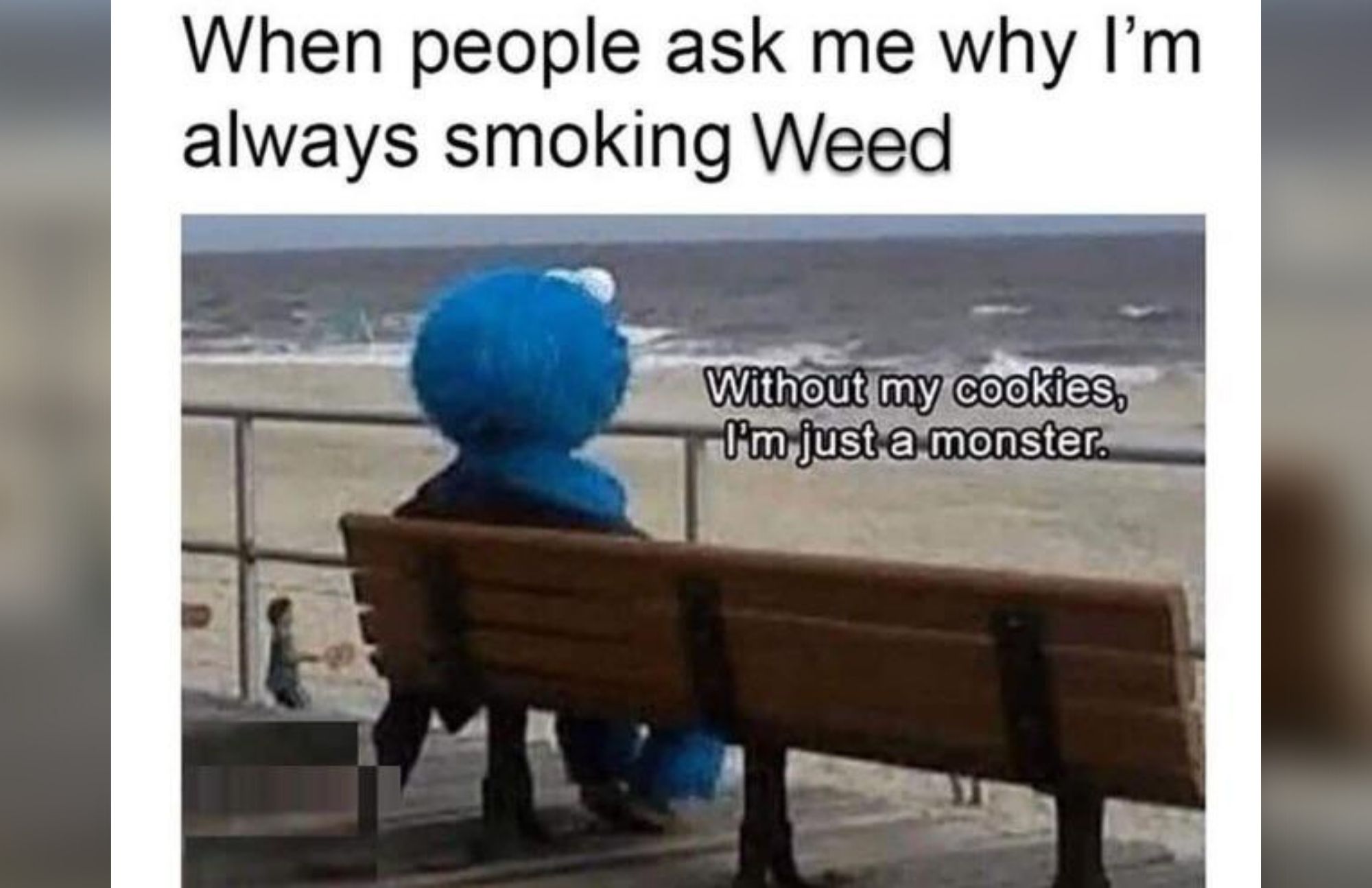 Cookie monster is sitting and in front him is a beach with a meme saying: "When people ask me why I'm always smoking weeds"

When people ask me why I'm always smoking weeds. Me saying: "Without my cookies, I'm just a monster." 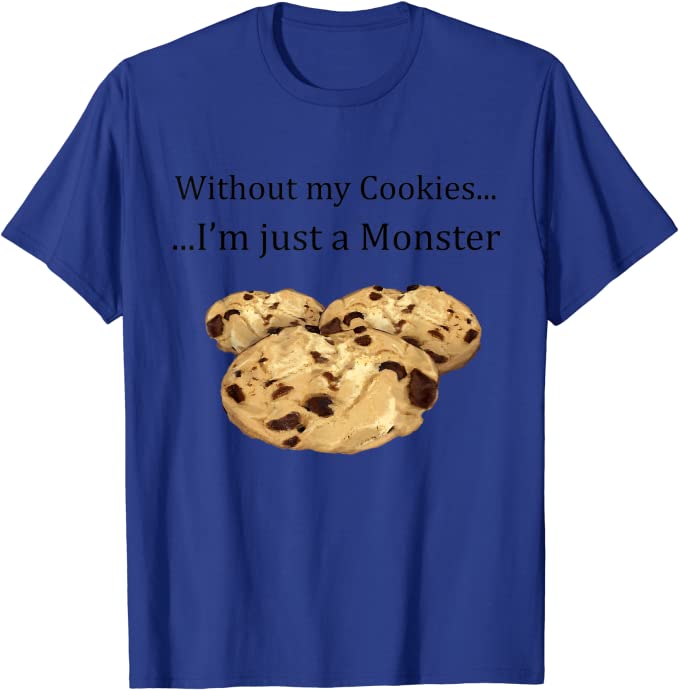 A blue-colored shirt with three pieces of cookie and a phrase that reads: "Without Cookies I'm Just A Monster Shirt"

Here's the description of this commercialized t-shirt in the amazon online store. 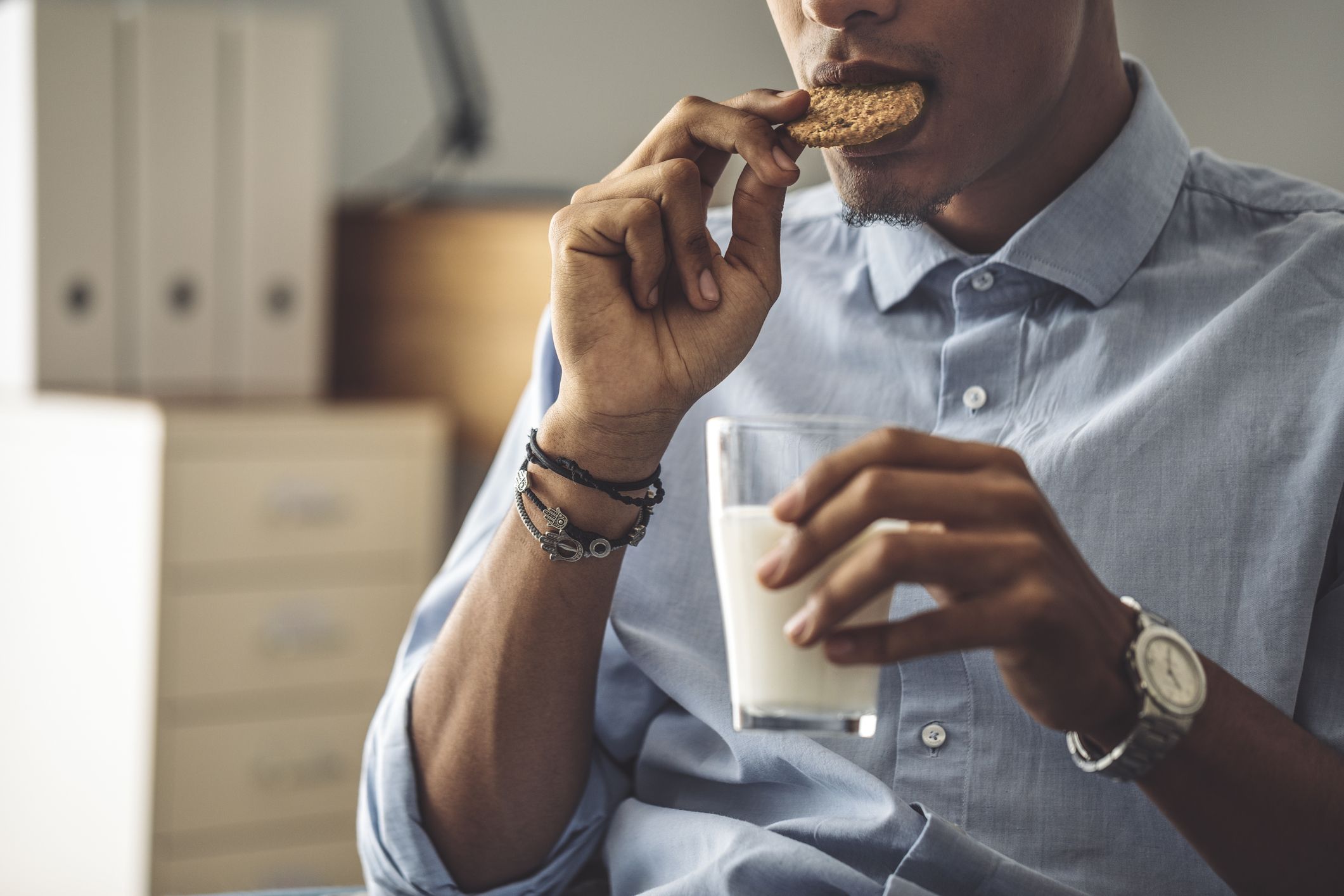 As previously said, Cookie Monster is recognized as the world's biggest cookie fan. But it's not that simple. What about your health?

You're all aware that eating cookies all the time is unhealthy.

Also, that is not a lifestyle that should be promoted globally, especially for children who must learn healthy habits.

If you eat a lot of boxed cookies, the number on the scale may rise.

These store-bought cookies, for example, are a good example of processed foods, and many of them include high-fructose corn syrup.

For instance, one serving of Original Chocolate Chip Cookies (which consists of three cookies) has less than one gram of fiber.

This lack of fiber will only cause problems for you in the long run.

The Cookie Monster is a well-known blue character from the Sesame Street television program for children who has an unhealthy obsession with cookies.

He doesn't gobble up all the food like Oscar the Grouch does out of greed. Instead, Cookie Monster's need to eat cookies quickly is probably caused by his genes, a chemical imbalance in his brain, or a very bad emotional or physical event.

He eats almost anything, even things that aren't supposed to be eaten. But, as you might guess from his name, cookies are his favorite food. His favorite kind are chocolate chip cookies.

After Cookie eats a piece of the lamppost on Sesame Street, Lopez comes back to say that Cookie is now "The Lamppost Monster."

Cookie Monster came from a monster that Jim Henson made in 1966 for a commercial for General Foods Canada.

This monster, known as the Wheel Stealer, advertised the snacks Wheels, Crowns, and Flutes along with two other monsters.

Who Performs The Character Of Cookie Monster In Sesame Street?

Cookie Monster used to be a bad example that was meant to teach kids that they shouldn't always eat cookies.

In fact, in 2005, Sesame Street began to focus more firmly on imparting positive health messages to children, a process that includes integrating segments into the program that emphasize the advantages of good eating, exercise, and proper sleep habits.