A woman was featured on the news when she drove for 90 minutes to go to the beach and once she got there, complained that other people had driven to the beach.

Over the weekend, Jane Peacock and her family travelled to Durdle Door in Dorset to enjoy the sun, but when they got there, were less than pleased to find another 2,500 people soaking in the Maytime heat.

It was pretty obvious that this woman and her family weren’t going to be alone in their weekend festivities but nonetheless, she and her daughter managed to feign slight bemusement at others doing the same. 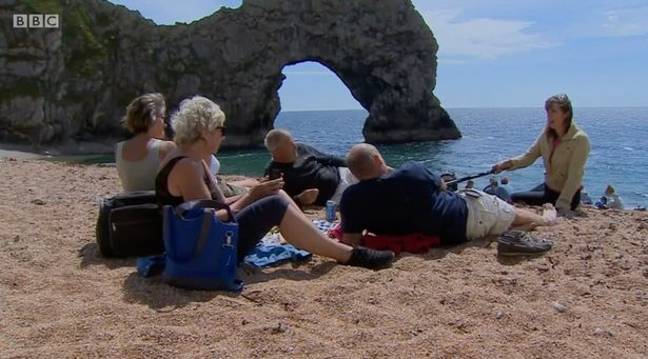 Jane and daughter Ellie were interviewed by the BBC, with Ellie saying:

“It’s nice to get out of quarantine but I think it’s going to peak again because everyone’s going to go mad and go anywhere they can“.

“It’s lovely to get out but I’m quite shocked as to how many people are here and to how they are not paying attention to the social distancing.

“I find that quite annoying to be honest. It’s like being in Tesco“.

To be fair to Jane, she didn’t say that she was annoyed with other people being there, but rather at the fact that they weren’t keeping their distance. Mental health woes are genuinely serious and after being locked in the house for two months, you can hardly blame someone for leaping at the opportunity to sit on the sand.

Just because Jane doesn’t have the privilege of already living by the seaside and some do, in theory – with these new incredibly vague rules – she should be allowed to venture to the sea in order to feel less depressed about this weird quarantine period and as long as people keep their distance, then all is well.

People weren’t happy though, with one person tweeting:

“This Peacock family are part of the problem. Nobody drives that long to go there. Should be 30 mins tops from your home. They could go through two counties in that time“.

“Sorry Peacock family, I live a five minute walk from the beach where I live, drop me a dm next time you want to come visit and I’ll drive the 1.5 hours to your house just to even things up“.

Again; very nice for this person who lives a five minute walk from the beach. Others aren’t so lucky.

I think if I made that journey though, I’d avoid BBC News cameras and certainly avoid telling them where I actually live.