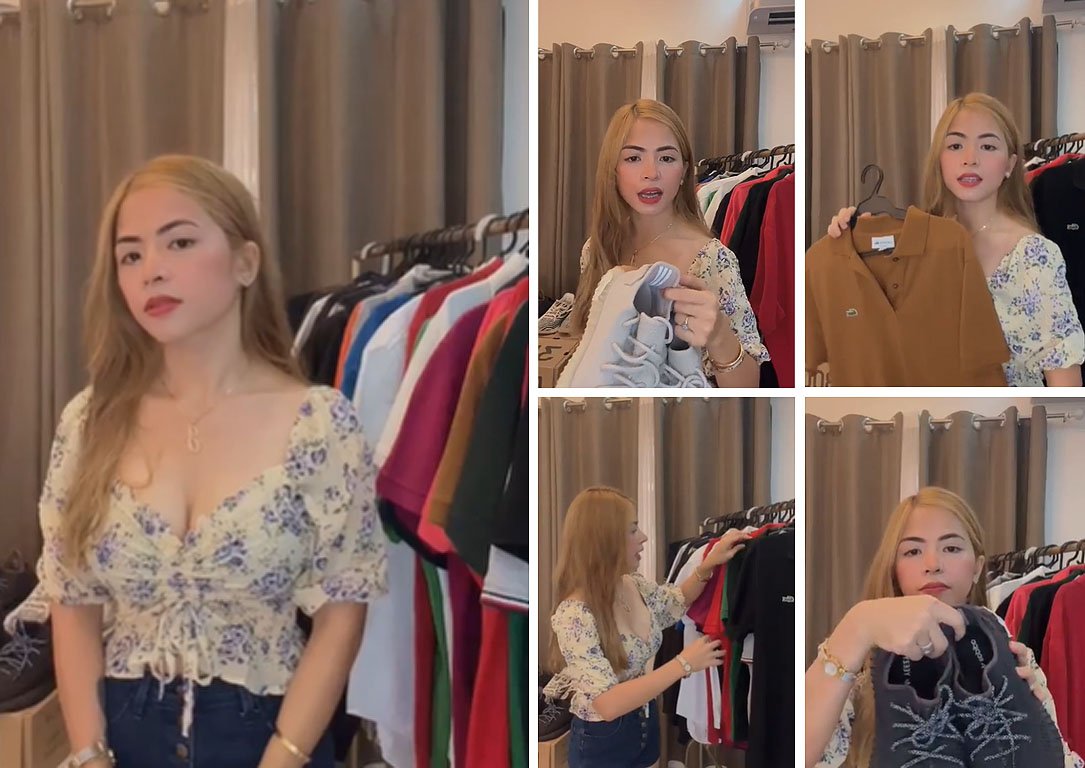 The woman scorned sold her cheating husband's possessions after he left her for someone else. This is a story about a woman who was dumped by her husband after being cheated on. In this article, you will look at everything she had to go through, as well as how she felt about selling the entire property. This post will also provide advice to any woman considering selling her husband's belongings after he has cheated on her.

The Ultimate Payback Of A Woman Cheated

A woman who was angry because of her husband's infidelity is known by the name Jamille Margarita Galvez. She's a Filipino woman who turned into an instant live-selling icon almost overnight after she broadcasted herself selling her husband's stuff, which included some of his most prized possessions, such as basketball caps, shirts, designer footwear, slacks, and many other items, on Facebook.

"Lahat ng items matino pa, ung may-ari lang ung hindi. (All items are still in good condition, only the owner is not)." Galvez said. "Wag mag-mine kung ‘di mo kayang panindigan gaya ng ginawa ng asawa ko (Don't mine if you can't stand it like my husband did)" she added.

In her first live selling, she was able to reach 28,000 shares and 4,000 on the second edition. Lacoste shirts, shoes, and even a pair of Adidas x Pharrell Williams Human Race NMD Breathe/Walk sneakers were among the items in the collection. One viewer express appreciation and said that Galvez is still deserving of respect and does not deserve to be dumped.

As part of her live stream, Jamille asked for the support of other wives who had been cheated on by posting the video on their social media profiles. Social media commended Jamille's positive attitude and sense of humor, even as she dealt with a betrayal. They encouraged her to keep going.

In their comments, several people expressed their support for the woman, assuring her that she deserved more. In addition, others have stated that she has encouraged them in their own attempts to overcome heartbreak.

Jamille claims that she has made approximately PHP300,000 (US$5,778) from the sale of her ex-belongings. She will use the money she earns from the live streams to support herself and her children financially.

People from Reddit ask a question: If you're having an affair with your spouse, how did it start? Why don't you break up with your partner?

"Exactly. Yeah, being cheated on (twice actually) really sucked. It made me feel shitty and wonder why I wasn't good enough. But then I really thought about any breakup and they all boil down to "You're not good enough," if that's the approach you want to take. Or they boil down to, "You don't make me happy." I know a lot of great people who I would not want to be in a relationship with. Genuinely awesome, attractive women, but I probably wouldn't want to spend the rest of my life with them.

Because we have different interests, and different goals, they like more attention than I like to give, they like to less attention than I like to give, and so on and so forth. Cheating is really just one person feeling like their needs aren't being met and then going and getting them met. Decide if it's if it's repairable or if it's even worth repairing and go from there.

That will take a lot of very painful, honest discussions. But there it is. Maybe it's because you're fat or she's fat or the guy your husband is fat and he's always been a chubby chasing homo. Figure it out. It will like being kicked in the balls and that's okay. Because that's the worst thing you can do to someone."

"Harmless" workplace flirting or something similar. A wife is not getting the attention and affection she deserves from her husband. Another guy gives her a compliment or shows genuine interest in how she is doing. She now has someone to talk to about her problems. They go to lunch together, and he listens to her.

If you don't give your partner the validation they need, and they can get it from somewhere else, and they let themselves be alone with someone else, eventually it is going to happen.

Please make your #1 priority in life be to let your husband/wife know how important they are to you. Make them feel beautiful, strong, important, and interesting. Be kind to them, be patient when they are driving you crazy. It may seem silly to act like this, but imagine the problems it will avoid.

On the other side of things, if you are feeling neglected and not good enough for him/her, do not fall into these traps. I know getting coffee with a friend seems harmless, and maybe it is. But don't ignore how it is making you feel. If you are honest with yourself you know you want more than coffee and that having them listen to you means a lot more to you than you're telling yourself. Communicate with each other. Don't go to other members of the opposite sex for help."

"I'm not currently in a relationship, but am having a sort of affair. It is with someone I should not be seeing for a couple reasons, and very few people know that it is happening. As to why we don't end it - we are both happy, enjoying ourselves, consenting and all that shit. We like each other and have a great time together, but if it ever got out that we were seeing each other then it would be a hell of a shitstorm to deal with.

Most people would probably tell me what I'm doing is wrong. I've talked to a few close friends about it. Some say I need to end it right away because of the mess it would cause if it got out, others tell me just to be careful but are happy for me because I'm happy. There are a lot of different responses from my closest friends. I don't think it's wrong, but I know that it should never get out until it's really serious. Do I still believe I'm a good person? Yeah, but to be honest I know I'm doing something I shouldn't but I'm happy. She's happy. So why stop either of us from being happy?"

Infidelity in the United States - Who Cheats More? 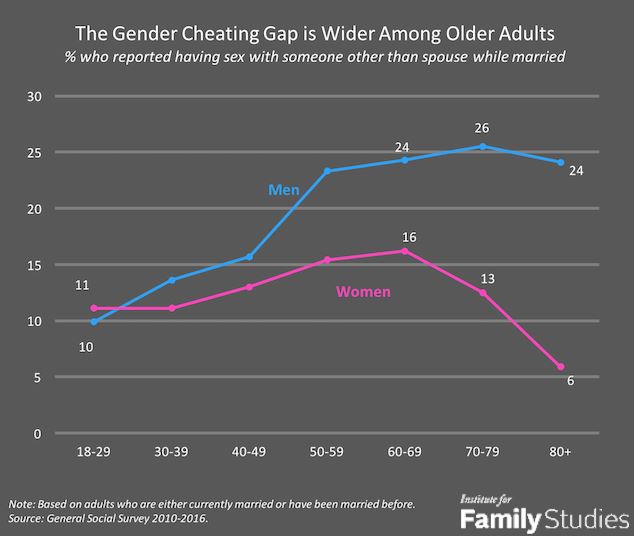 Men are more easily susceptible to cheating than women are in general: According to data from the latest General Social Survey, 20% of men and 13% of women admitted to having sexual relations with someone other than their spouse while married (GSS).

However, as illustrated in the image above, this gender disparity fluctuates according to age. Females are significantly more likely than males to commit infidelity among never-married person ages 18 to 29. (11 percent vs. 10 percent ). However, this disparity rapidly closes between the ages of 30 and 34 and widens with age. Throughout the middle ages, both male and female infidelity grows.

Women in their 60s have the highest rate of infidelity (16%), although the percentage declines significantly as they age into their 70s and 80s. By comparison, the infidelity rate is highest (26 percent) for men in their 70s, and it remains high among men aged 80 and later (24 percent ). Thus, the gender disparity in cheating reaches a zenith among the oldest age group (ages 80+): an 18 percentage point difference between men and women.

Why Do We Cheat On Someone We Love 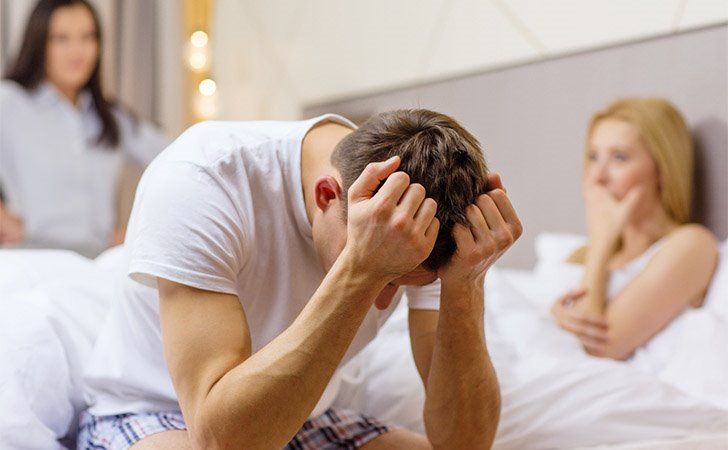 A distressed man placed his two hands on its head in a bedroom, and two women are seen in the background

Cheating is a technique for some people to explore repressed aspects of their personalities. These cheats don't really want to change who they are at their heart; they just want to get away from it for a little while. They're not searching for someone else; they're searching for hidden versions of themselves.

Self-esteem issues are common among cheaters. They don't feel attractive, powerful, intelligent, youthful, or anything else. As a result, they deceive to gain acceptance. They utilize that glimmer of attention to make themselves feel loved, desired, and deserving.

How Does A Woman Feel After Cheating

Many people are afraid they will be cheated on, and this is where most of that fear comes from. The woman thinks that once someone else takes her place, she will no longer be needed, wanted, and will be thrown away. Because it hurts her pride as a woman and her value as a person. She would think that all of her love and work is for nothing. 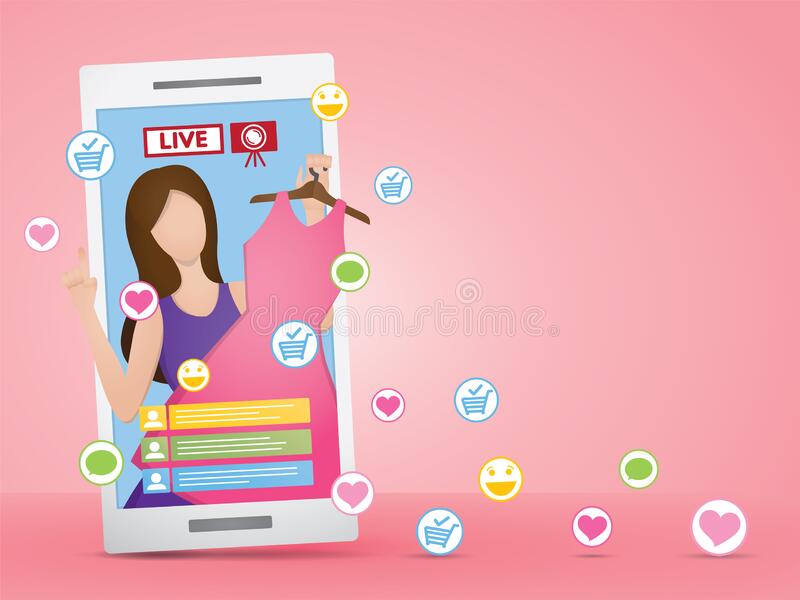 An animated woman holding and selling a piece of pink dress

It has been proven that livestreaming is a great way to market your business. With Facebook being one of the most popular social networks, Facebook Live seems to be the best way to get more people to follow you and buy your products. Here are the things you need to do to get the most out of your Facebook Live videos.

Set a date for your broadcast. Check your page stats to see when your fans are the most active. This can help you decide when to post. If you plan to go live often, make this the same time each time. This way, you can make sure that your viewers always come back to your show at the same time each week.

Prepare your stock. The more you plan ahead, the easier the project will be. Write or type up your sale tags and make sure your product lists are in order well before you start. Live helpers, which are pictures of your product and their identifier number. This is the number customers write down to get the associated product. If you don't want to spend time making sales tags, you can also print out live helpers.

Before the event, set up and troubleshoot the equipment. Set aside time to put together and fix all of your equipment. You don't want a tech glitch to happen at the height of the audience's attention. Make sure you set up and test all of your gadgets before you use them. There's also your router in this. Keep in mind that you should check your internet connection before you start going live.

When A Spouse Is Unfaithful

MARITAL infidelity is depressing. True, some partners have discovered they can forgive and reconcile with a remorseful spouse. Unfaithfulness is a painful discovery for any couple, regardless of how long the marriage lasts. How can such ones deal with their fragile emotions?

Many innocent spouses have found comfort in the Scriptures, even though they have had a lot of pain. It has been shown to them that God whose name is Jehovah sees their tears and understands how hard they are going through (Malachi 2:13-16). Jehovah God invites you to throw your burden as what you understand in Psalm 94:19 saying: "When anxieties overwhelmed me, You comforted and soothed me."

Many have followed these fine pieces of advice from the Bible such as:

The woman scorned sold her cheating husband's possessions shows that for many reasons, marriages part ways. One of the most common and difficult to deal with is when one partner "cheats" on the other. This article tells all married people to stay loyal to each other even though they are having a lot of problems right now. If you are faithful to your partner, you will keep your conscience clean and have the real pleasure of knowing that you are making your family, friends, and God's heart happy.