Woman Throws Food At Baby Daddy For Feeding Only One Kid 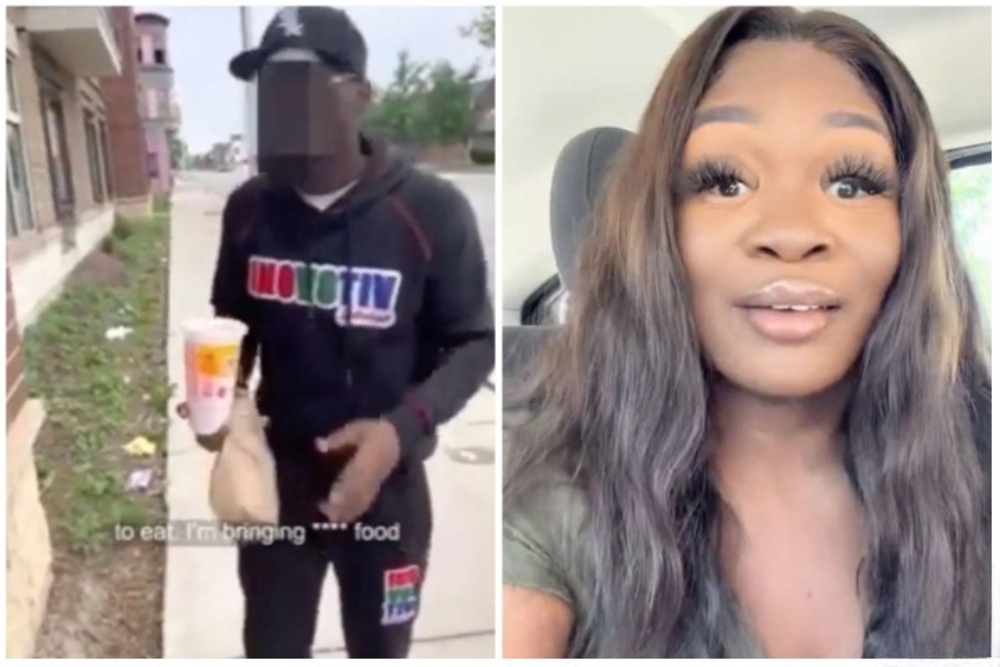 The Internet is divided over a viral video depicting "Lisa," a woman throws food at baby daddy and argues with one of her baby daddies for bringing a McDonald's meal for his son but nothing for her other three children.

A mother has sparked a furious online debate after filming her son's father dropping off McDonald's for their child while excluding her three other children. The mother is seen waiting at the window for their son's father.

She explains, "Every day my baby daddy come here with one f***ing meal for my child. But I have three other kids! We only have one kid together but he only wanna come and bring one thing of McDonald’s. What about my other kids?"

As the man gets out of his car to deliver his son's food, he wonders why she is filming him. Instead of thanking him for providing for his son, she threatens to "expose" him for failing to feed her other children. She even woman throws food at baby daddy.

"It ain't more than enough food in that bag for everybody," she screams as he arrives with a McDonald's meal and a drink for his son.

"That don't look enough for all my kids!" she says. "What about my other kids?"

"What about your other kids? They ain't my kids," he responded.

"But them yo' kid's siblings though," she snaps back. "My other kids finna be left out..."

"You didn't feed them?" he inquired.

He eventually asked Lisa to send his son downstairs to eat his sandwich in the car. He stated that the boy could eat in his room, away from the other kids, or in his car.

He also told her that he is only responsible for his child and that she should notify the other fathers so that they can feed their own children.

Lisa snatched the bag and drink from his grasp and tossed them to the ground after some heated debate.

The irritated father got back in his car and drove away. Hopefully, he drove straight to court to seek custody of his son. View the video below.

How Are People Reacting To "woman Throws Food At Baby Daddy"?

Some people are taking the mother's side while others are supporting the father.

What Are People Saying Who Are On The Father's Side?

A person said, "He’s not legally obligated to take care of them. It’s not his fault she had more kids than she could take care of and by different men who weren’t s**t."

What Are People Saying Who Are On The Mother's Side?

A Twitter user said, "Simply buying McDonald's for all the kids in the house is simply the right thing to do. No one is gonna ask him to pay for the other kids’ tuition, that’s ridiculous. If he really didn’t want to buy anything for the other kids he could have just taken his kid out to eat. Simple."

A woman throws food at baby daddy for feeding his only son. So, who do you support? There are arguments to be made that she is not wrong in not wanting her other children to feel excluded. However, many online comments support the father, claiming that the other children are not his responsibility.