The world’s most identical twins are a couple of weirdos by the sounds of things, as their plans for having kids is more than bizarre. It’s utterly insane.

Sick of it. Sick of this really weird stuff happening for the express reason that people want to be spoken about and then them somehow getting onto TV to talk about it. You know what never gets spoken about? Aston Villa centre half Tyrone Mings’s football academy that’s free for underprivileged kids.

No, Tyrone Mings is a footballer who just escaped relegation so therefore he’s stupid and no-one cares about him. 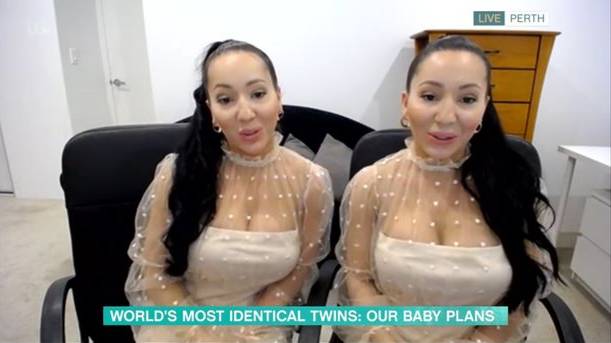 Sorry about that. These twins just wind me up to know end. You know why they’re the world’s most identical twins? They had surgery to be so. No, not some kind of genetic abnormality – they literally just went under the knife. They were already identical to start with, but that wasn’t enough and now they just feed into the narrative that twins are creepy weirdos.

Anna and Lucy DeCinque, from Perth, Australia, are the pair and you’ve probably seen them in the news before, but now they’re making headlines hopefully for the last time as they intend to get pregnant at the same time by the same man. I imagine they’ll be utterly gutted that their kids won’t come out identical.

Taking to This Morning on ITV to talk about their plans, Presenter Ruth Langsford asked:

“You literally do everything together including going to the toilet at the same time?“

To which they answered:

“It could be obsessive but this is how we want to live our life, we live as one person.

Honestly this sounds like something out of a horror film.

Eamonn Holmes joked “Ben will be knackered!” as he made reference to their shared boyfriend, after Ruth asked how they’d be conceiving their children, to which the twins answered:

“Maybe IVF if we have to go down that road, even freezing our eggs at the same time.”

Best of luck to them and all but this one just seem a little too bizarre for me.