A Yorkshire Couple Finds 400-Year-Old Coins Worth £250,000 Under Their Kitchen Floor 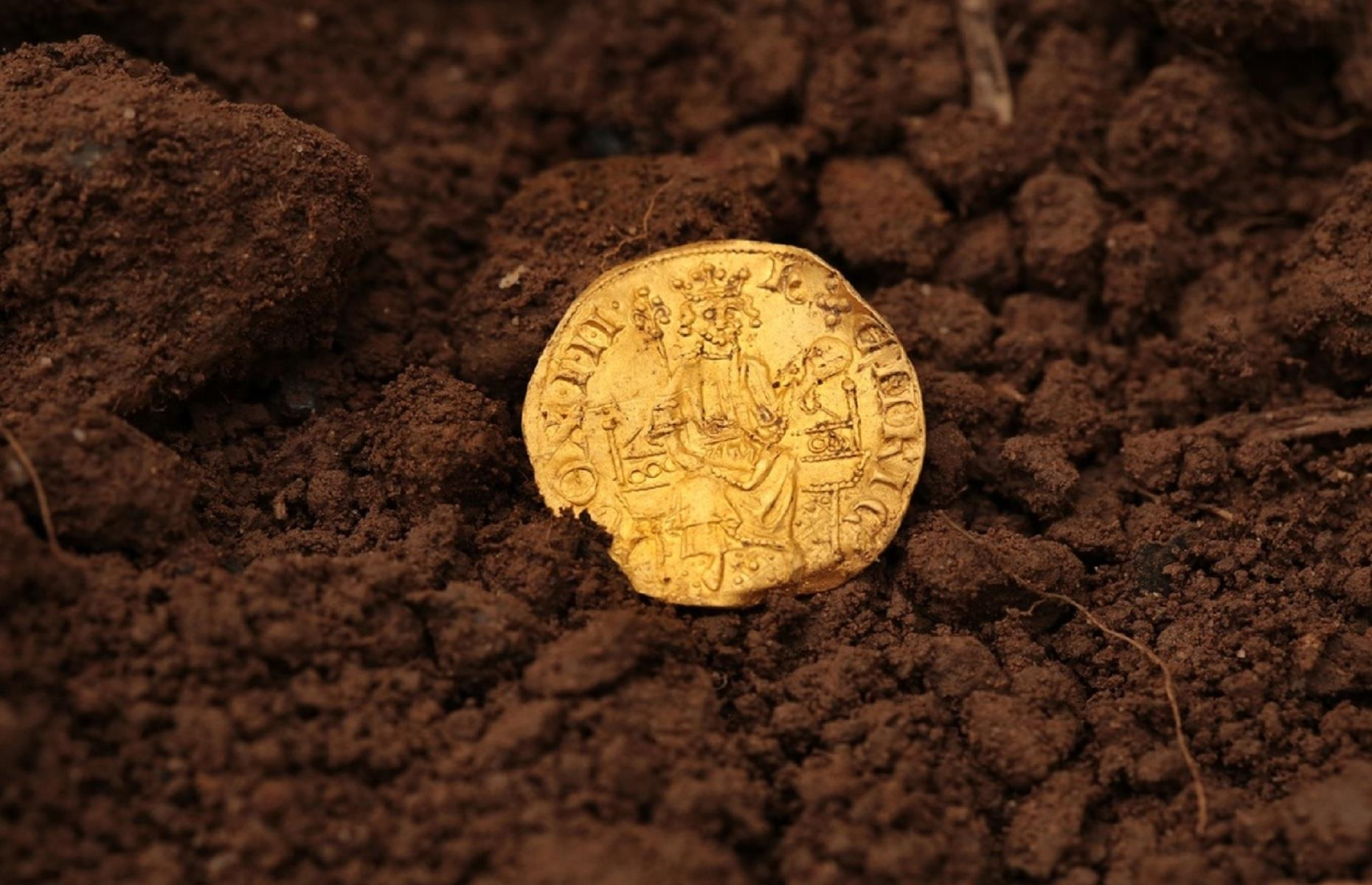 One fortunate Yorkshire couple finds 400-year-old coins worth 250,000 under their kitchen floor.

Wanna know the details, here is everything you need to know. 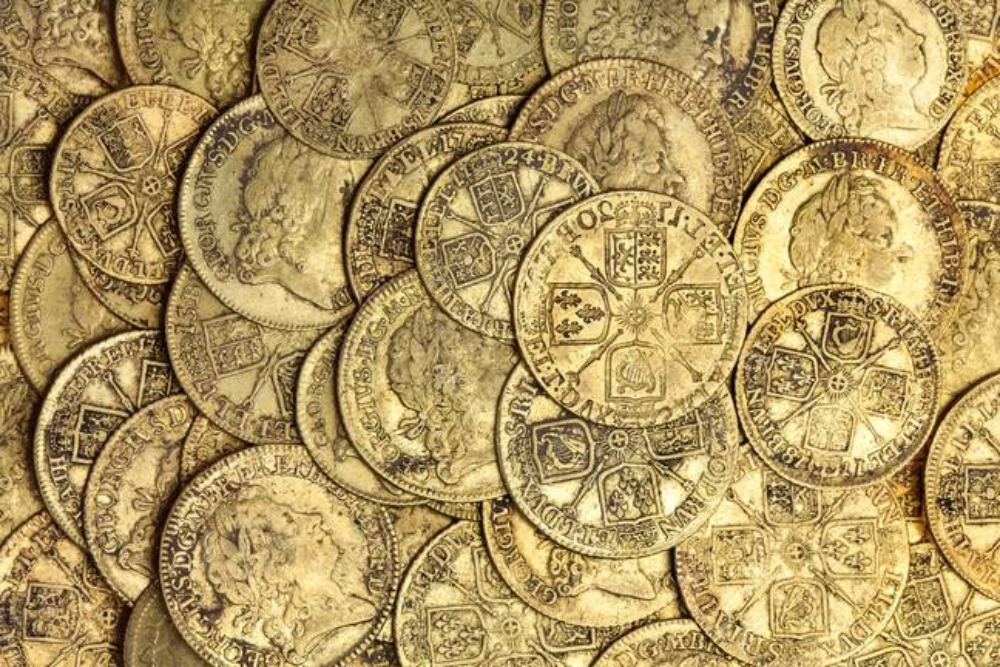 Gold coins placed on top of each other

A Yorkshire couple discovers 400-year-old coins worth £250,000 under their kitchen floor in 2019. While the floor at their North Yorkshire home was being restored, the 264-piece gold cache was discovered.

When they lifted the floor of the 18th-century building, they found a ceramic cup about the size of a Coke can. This was a very interesting find.

They didn't realize they had been living on a cache worth $250,000 for the preceding ten years until experts examined its contents.

Before you ask, no, they don't live in Bilbo Baggins' house. The treasure, which is thought to be worth $250,000, was found in their 18th-century Ellerby, North Yorkshire, home.

The collection, which has since been dubbed "The Elderly Hoard" and will be up for auction this October, as you might imagine, delighted the owners. After ten years of habitation, the couple found the stash in 2019.

They discovered gold coins in a pot that was roughly the size of a Coke can upon closer investigation. But when they looked more closely, they saw that it was a salt-covered earthenware cup that held a stash of coins.

The coins were found by the homeowners in July 2019, and now that they have been formally disclaimed, they can be sold at auction. The star of the auction is a George I guinea with a mint mistake from 1720.

The coin, which features two "tail" sides rather than a king's head, is anticipated to sell for £4,000. A Charles II guinea dated 1675 that has the king's Latin name misspelled as CRAOLVS rather than CAROLVS is estimated to be worth £1,500.

During the lives of Joseph Fernley and his wife, Sarah Maister, the coins accumulated. Fernley passed away in 1725, and his widow stayed in Ellerby until she passed away at the age of 80 in 1745.

The UK couple contacted London-based auctioneers Spink & Son, who came to investigate, not knowing what the coins were worth because, well, why would you know that? The coins were found to belong to the Fernley-Maisters, a wealthy and powerful merchant family from Hull.

The family initially engaged in importing and exporting coal, wood, and iron ore before becoming Whig politicians up to the early 1700s. The best thing in their collection, which is being sold right now, is a George I guinea from 1720 with a mint error: the coin doesn't have the king's head on it.

"We're about to pull out our metal detectors and check under our floors because that coin alone is predicted to sell for up to £4,000."

Gregory Edmund, an auctioneer, expressed similar admiration for the discovery, saying, "This is a fascinating and highly important discovery. It is extraordinarily rare for hoards of English gold coins to ever come onto the marketplace." 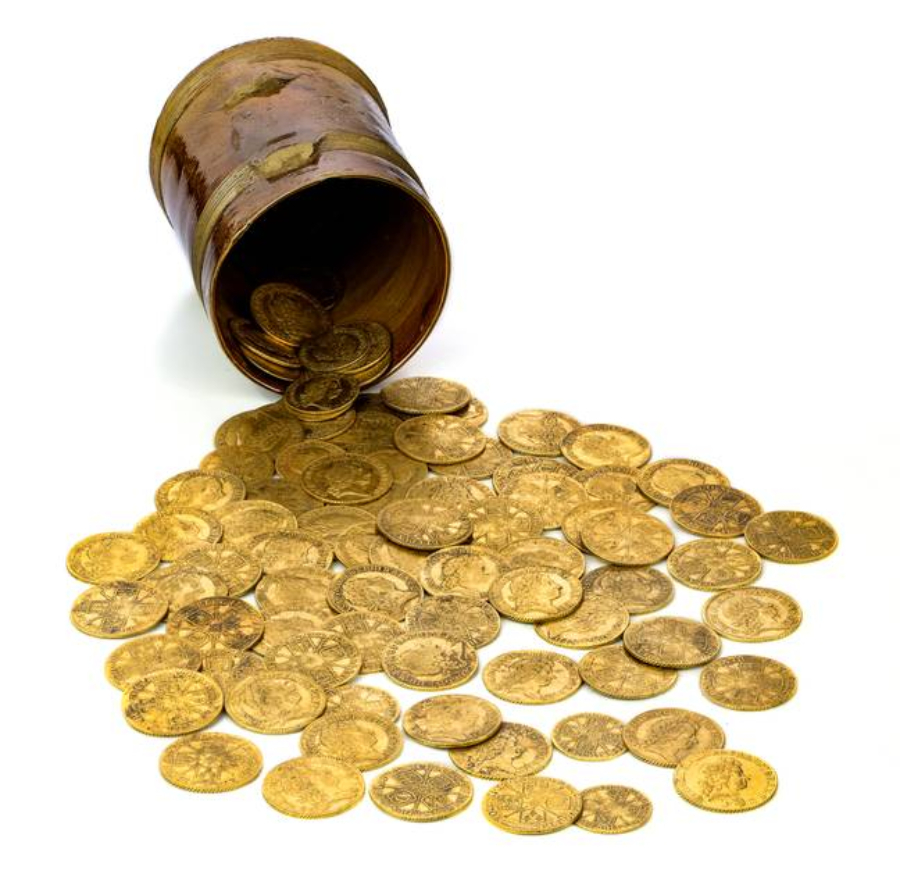 Gold coins and a vintage tin on a white surface

"This find of over 260 coins is also one of the largest in the archaeological record from Britain.

It was an entirely serendipitous discovery. The owners were relaying the floor of their house and found a pot about the size of a Diet Coke can, full of gold.

They've never picked up a metal detector in their life. They were just relaying a floor and thought it was an electrical cable at first. I rushed up to see them in North Yorkshire a few days after and there were 264 gold coins in this cup - it is unfathomable, I have no idea how they managed to fit so many in that pot. The coins date from 1610 to 1727, which is an unusually long period for a hoard," he said.

The coins are helping us understand the history of the British economy as well as the couple who discovered them.

"It also raises the question why has someone decided to bury a lot of coins at the beginning of the 18th century, when they had banks and banknotes - all the things that meant hoarding shouldn't have happened anymore," Edmond added.

"They're not mint perfect coins, they are coins that have had a hard life. However the number of coins and unique method of burial presents an extraordinary opportunity to appreciate the complicated English economy in the first decades of the Bank of England and significant distrust of its new-fangled invention the 'banknote.'

I rushed up to see them in North Yorkshire a few days after and there were 264 gold coins in this cup - it is unfathomable, I have no idea how they managed to fit so many in that pot.

Its contents are hardly "mindblowing" - they simply reflect the £50 and £100 coins of day-to-day exchange buried and mysteriously never recovered by their wealthy owner.

It is a wonderful and truly unexpected discovery from so unassuming a find location.

As a coin specialist of many years experience, I cannot recall a similar discovery in living memory, and it is therefore an enormous privilege to be able to properly document and explore this hoard for the benefit of future generations."

There are so many incidents like this. Many couples have found treasures worth of millions of dollars. Below is an example. 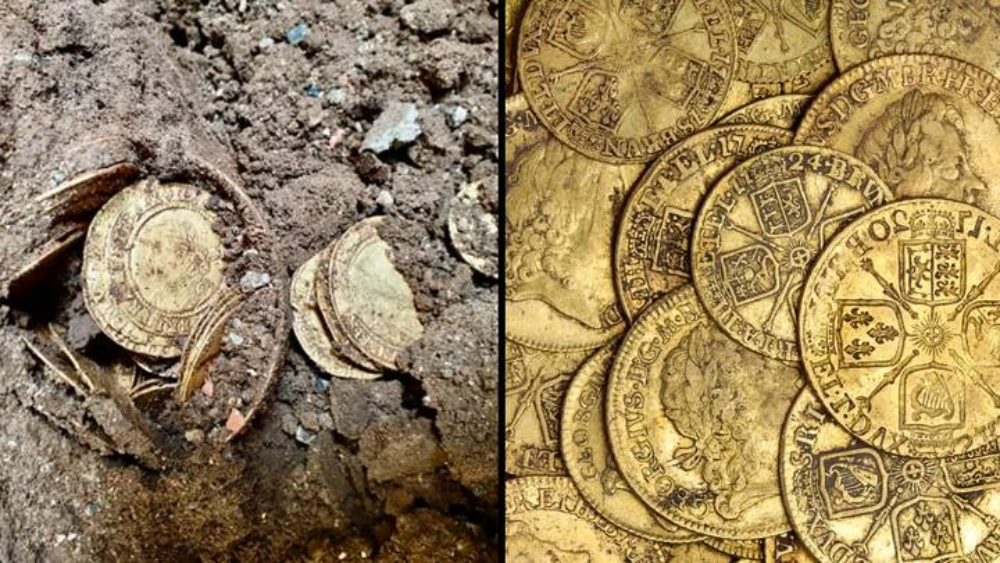 Gold coins found under kitchen floor; Gold coins placed on each other

According to a currency firm that represents the couple, a cache of rare Gold Rush-era coins discovered by a couple in California last year while they were walking their dog may be the largest hidden treasure ever discovered in the United States and is worth more than $10 million.

According to coin expert David McCarthy of currency company Kagin's, the 1,400 gold pieces are from the middle to late 1800s and are in almost perfect condition. They were found on the couple's property in April 2013 buried in eight rusting metal cans.

"We've seen shipwrecks in the past where thousands of high-grade gold coins were discovered, but a buried treasure of this magnitude is unheard of," McCarthy said."I’ve never seen this face value in North America and you never see coins in the condition we have here."

When Did The UK Couple Find Gold Coins Under Their Kitchen Floor?

How Many Gold Coins Were Discovered By The UK Couple?

A total of 264 gold coins were discovered by the UK couple when they were renovating their kitchen.

When Will These Coins Be Auctioned?

These coins will be at the auction this October (2022).

A Yorkshire couple finds 400-year-old coins worth £250,000 under their kitchen floor dating back more than 400 years will soon get a quarter of a million pounds after the auction.