Human stupidity is informing much of our news lately; yesterday there were a few stories of other so-called ‘influencers’ getting their comeuppance after taking part in the ‘coronavirus challenge’ that had been doing the rounds on social media.

One 26-year old man in Missouri has now been arrested on terror charges after he licked a row of products in a Walmart store and posted it online saying: “Who’s scared of coronavirus?”.

Another teen has said he is now in hospital after taking part in the ‘challenge’ and videoing himself licking a toilet seat and contracting the virus.

This has prompted the Department of Justice in America to announce that ‘people who deliberately spread coronavirus could face federal terrorism charges for ‘purposeful exposure and infection’”.

“Because coronavirus appears to meet the statutory definition of a ‘biological agent’… such acts potentially could implicate the Nation’s terrorism-related statutes”.

Adding: “Threats or attempts to use COVID-19 as a weapon against Americans will not be tolerated”.

This led to a New Jersey man, who allegedly coughed on a Wegmans worker and said he had the virus to be charged with terroristic threats on Tuesday.

Elsewhere, a YouTube and Instagram ‘star’ who has 68.7k subscribers to his channel has caused outrage after uploading a video of himself licking a handrail on a New York subway train. 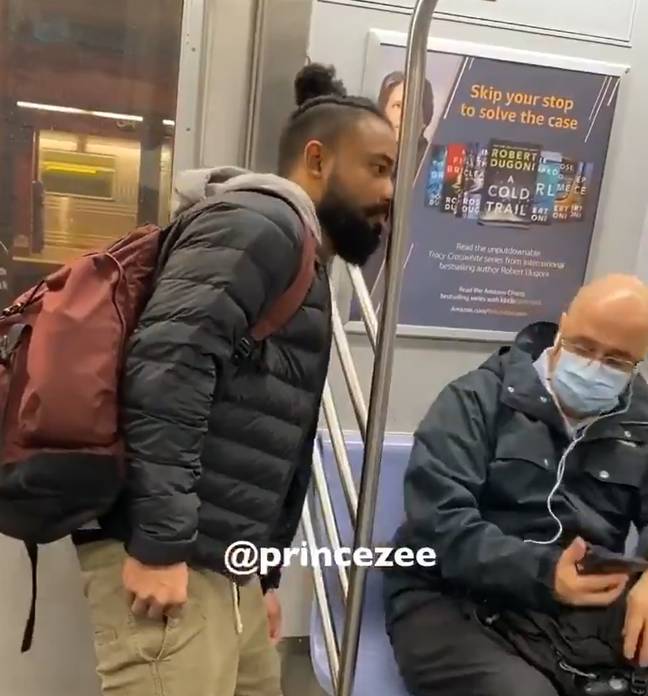 New York currently finds itself at the epicentre of the coronavirus pandemic with at least 210 people reported to have died from the virus and positive cases topping 25,500 – more than half of all COVID-19 infections in the States.

The YouTuber who is most commonly known as Prince Zee can be seen sliding his tongue across the handrail while a commuter wearing a protective mask is sat nearby.

Some say he was using a ‘fake tongue’ in the video but that hasn’t stopped many social media users slamming him for his behaviour.

One person commented: “People seen doing this should get arrested”, while another added: “How is this even remotely funny?”.

GMB’s Piers Morgan who had a lot to say about those ‘morons’ who are taking part in such challenges earlier in the week didn’t mince his words in a Twitter post saying: “Another f**king moron. Find him, jail him, give him no treatment if he tests positive”.

Shouldn’t be too tasking considering he’s so ‘famous’.

As I say, whilst normal human beings are busy ensuring high levels of hygiene and sanitisation, it seems some idiots are keen to start casting their tongue along really unsanitary objects like toilet seats and rims.

Only yesterday, news broke that the guy who filmed himself licking products on a supermarket shelf in Virginia, America, had now been arrested on terror charges, and it seems karma is now very much doing the rounds as another teenager who ran about licking a toilet seats has been hospitalised after testing positive for coronavirus.

A kid who licked toilets as part of the #CoronaVirusChallenge says he's now in the hospital with coronavirus. @gayshawnmendes was also just suspended from twitter pic.twitter.com/lfG2NBlTrs

The teen’s Twitter handle @gayshawnmendes was also suspended subsequent to his act of stupidity and it just goes to show a few extra ‘likes’ is not worth potentially killing yourself over.