Carole Baskin has been pranked big time as she was tricked by a couple of wacky chappies who goaded her into an interview by pretending to be Jimmy Fallon.

YouTubers Josh Pieters and Archie Manners are the fellas in question who actually made me feel a bit bad for the woman who I previously hated to dangerous degrees.

Carole Baskin became one of the most hated people in pop culture when Tiger King was released on Netflix. There are four reasons for this; Joe Exotic is very charismatic so you more or less side with him even if you don’t want to, everyone thinks she killed her ex husband to inherit her money, f*cking over his family in the process, her new husband is a complete and utter weirdo with a very punchable face and it was edited to make her seem evil. 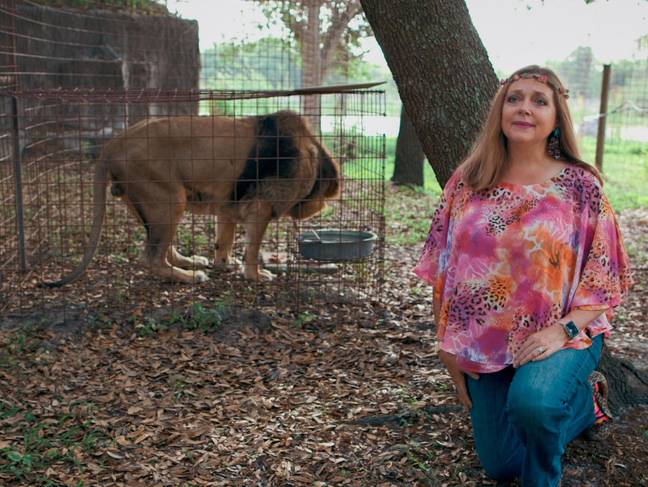 Do I think she had something to do with her husband’s disappearance and had prior men try to take restraining orders out on her? Yes I do. Do I think she’s any worse than any other people on the main cast of Tiger King? No. Absolutely not.

Jeff Lowe, for example, is a slimy man. A subhuman piece of work and a supercilious waste of space whose arrogance is matched only by his capacity to make me physically gag when his goateed, bandana and capped face crawls unwelcomely onto my screen. He’s the worst going.

Anyway, back to Baskin who was pranked by the people who previously fooled Katie Hopkins into receiving the [and this bit is rude] C.U.N.T award.

Pieters and Manners pretended to be working with Jimmy Fallon and had clips of him asking questions to direct at the Tiger King star, who believed that she couldn’t see the famous TV host due to him being filmed by with professional cameras not connected to the internet.

The two even managed to get Baskin to open with her famous “Hey all you cool cats and kittens” line. Pretty impressive.

Baskin explained that her daughter was going to do the interview initially, but the whole family are still all together caring for cats. Once the interview was over though, she thought something weird was going on, taking to the internet to write:

“This is the email I sent to my husband and daughter after the interview: “Well that was weird. I couldn’t see Fallon during the interview, and when they had his voice on the questions they didn’t sound like it was specific to the topic.

“He’d just say things they could have recorded from any other interview; like – what are you doing during Quarantine?

“At the end he said: ‘Miss you buddy,’ so that really didn’t sound like it was live from him to me.

“They did stick to the questions they gave us, so I just can’t tell. This whole thing may have been a spoof and they said they won’t broadcast till next week, and will let us know before they do, but I’m not holding my breath“. 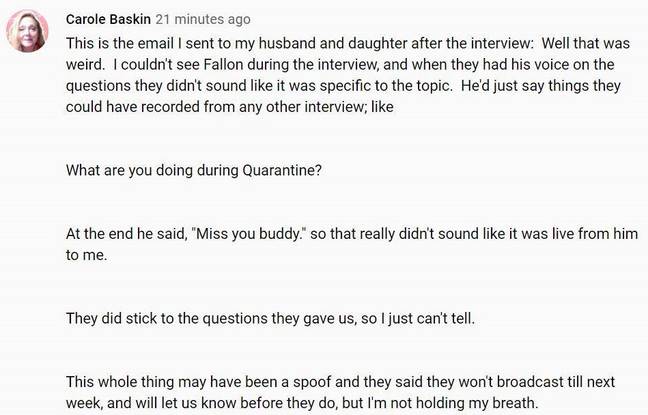 I do actually feel bad for her.

Still an impressive feat though…