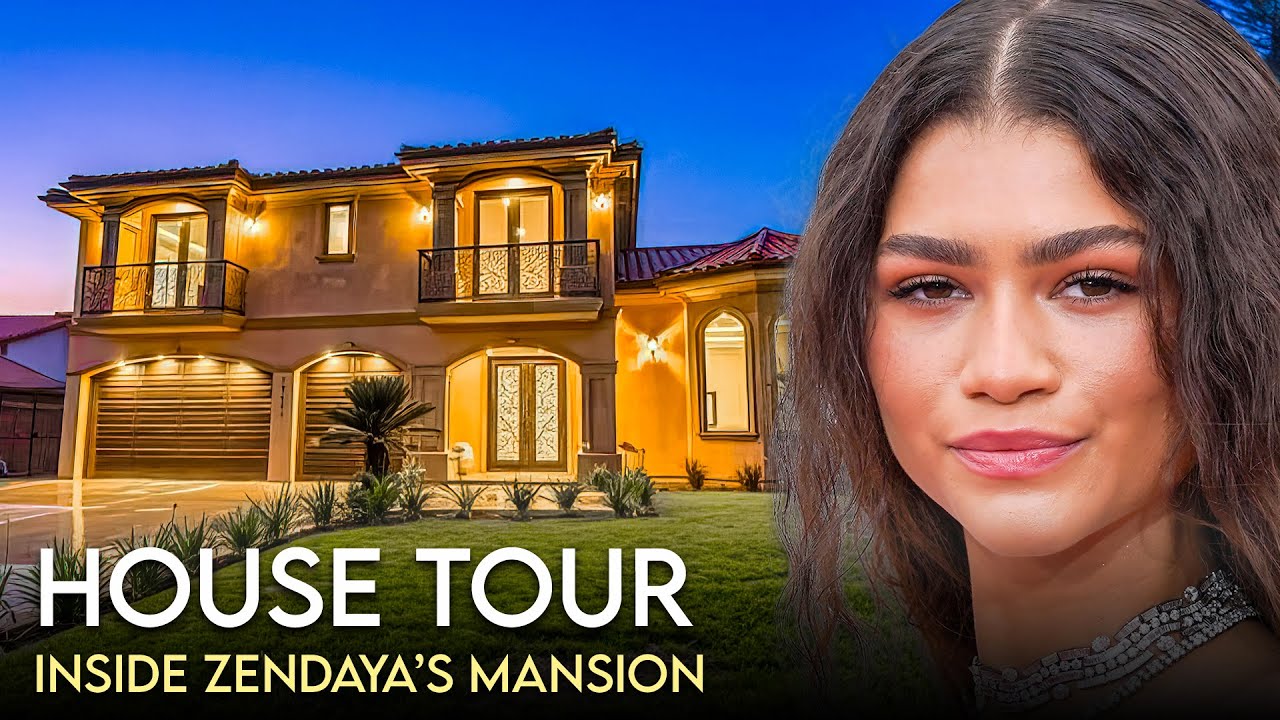 If you've ever dreamed of owning a house like Zendaya's LA mansion, you're not the only one.

We all want to live in a comfortable and luxurious home, but because we all have different financial situations, we may only be able to fantasize.

Numerous celebrities out there make their dream house into reality, and one of the examples of this is Zendaya Maree Stoermer Coleman, also known as Zendaya.

With Zendeya's rising success, she has amassed an estimated net worth of $5 million while still in her early twenties.

Zendaya, who was born in the US, became well known as a Disney Channel actress.

One of her more dramatic roles was in Euphoria, for which she won an Emmy Award. And who doesn't know her from the new Spider-Man movies and "The Greatest Showman?"

Moreover, modeling, singing, dancing, and being a brand ambassador are just some of the things she has done in her career.

Despite just being 23 years old, she has already managed to succeed in her life.

When she was 20 years old, Zendaya bought her first home in Los Angeles, a $1.4 million mansion.

This is where Zendaya lives, specifically in Northridge, a Los Angeles suburb that is more than 30 miles north of the city center.

The real estate market in the neighborhood is also fairly diverse, with properties ranging in price from $418,000 to $9 million.

Recently, though, the star moved up to a $4 million home in the Encino neighborhood of the San Fernando Valley.

This article will let you see the two mansions purchased by Zendaya in Los Angeles, which are in Northridge and Encino.

Want to see what her houses in Northridge and Encino look like? Let's take a look first at Zendaya's expensive home in Northridge, Los Angeles.

An impressive entryway greets visitors to the 4,155-square-foot property, which includes five bedrooms, five bathrooms, and an instagrammable pool area.

On her app, she gave her fans a video tour of the house, in which she described her favorite parts of the room, like how she showed the grand lobby and high ceilings.

This property in Northridge, Los Angeles, has a staggering price of 1.4 million dollars.

I'm from Oakland, humble beginnings. I have two parents as teachers, so I've never lived in a two-story house or a house with air-conditioning or a house with a pool, so this is crazy. I have a staircase; it’s like the Cinderella spiral staircase. I actually have one.

This brand-new home in the Mediterranean style is in Northridge, California.

Since Northridge is to the north of Los Angeles, Zendaya is away from some of the crazy things that happen in Hollywood.

The California State University Northridge has made Northridge well-known.

Zendeya says that the impressive peninsula stairway and the Cinderella spiral staircase are her favorite parts as shown below. 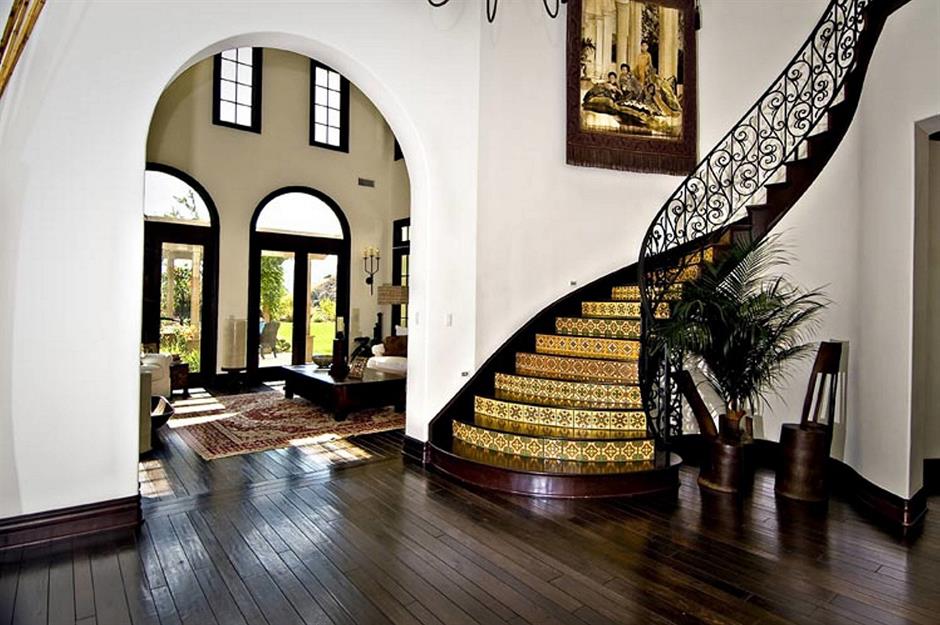 Zendaya's clothing line, Daya by Zendaya, just came out, so the designer made sure the master bedroom suite had enough closet space for her clothing collection, as well as a custom fireplace, vanity, powder room, and a large, private balcony.

One of Zendaya's fans on YouTube, named Nya, is really appreciative of the star's fruit of labor. She stated that:

A million dollars is amazing for a starter home! Beautiful home! I love both of them. That spiral staircase is amazing!

It is a beautifullllll home! She seems like such a sweet beautiful lady. That spiral staircase is gorgeous. Her back yard is wonderfully private. Her kitchen and bedroom is exquisite! Love it all. Congratulations to her for all her hard work.

Last but not least, Wilson emphasized what Zendaya has shown after all of her success in life. He said:

I love that Zendaya never let the fame get to her head and she always remembered where she came from and stayed humble.

Zendaya stealthily upgraded her housing arrangements in the year 2020 by purchasing a stunning home in Encino, Los Angeles, for the amount of $4 million.

Her ideal house has almost 5,000 square feet, six bedrooms, seven bathrooms, a guest house with two bedrooms, a gorgeous pool, and many other opulent features.

In contrast, her previous property had 4,000 square feet, five bedrooms, and five bathrooms.

Since the ranch-style house was constructed in 1939, it exudes a lot of the charm that is associated with an earlier era.

Even though the house has been through numerous remodels and reconstructions ever since it was built more than 80 years ago, its character and attractiveness have not been affected in any way.

At the moment, the floor plan on the ground level is open, and it has beautiful hardwood floors, recessed lighting, and high ceilings.

Because there are many windows and several fireplaces, the inside is filled with natural light.

It is, which might seem like an unusual addition for California, but we have no doubt that the celebrity will not be upset about it. 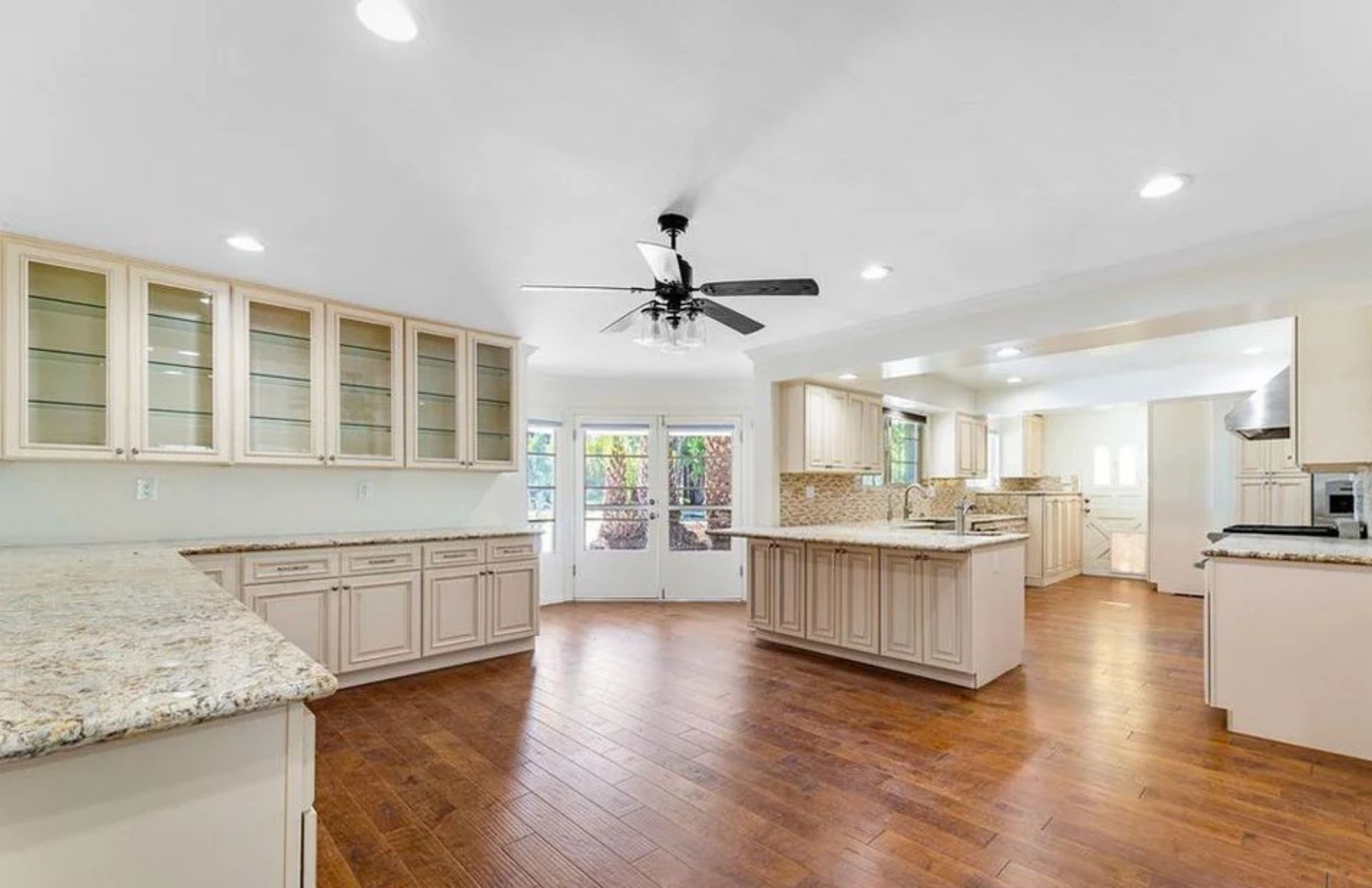 Zendaya's kitchen has a wooden floor style with granite countertops

Like the other rooms on the first floor, the large kitchen has big doors that lead to the backyard and a view of palm trees.

The room is also white and has hardwood floors. It is nicely decorated with cabinets in a retro style.

Also, the photo showed granite countertops, but Zendaya has probably done some remodeling herself.

She throws lavish dinner parties for her family, friends, and coworkers, so it goes without saying that she has top-of-the-line culinary equipment.

Zendaya, on the other hand, would prefer to keep the counter space in this kitchen.

There are walls of counters and cabinets encircling a wide center island in this kitchen, making it look like two separate rooms.

Her Enormous Home Has Six Bedrooms 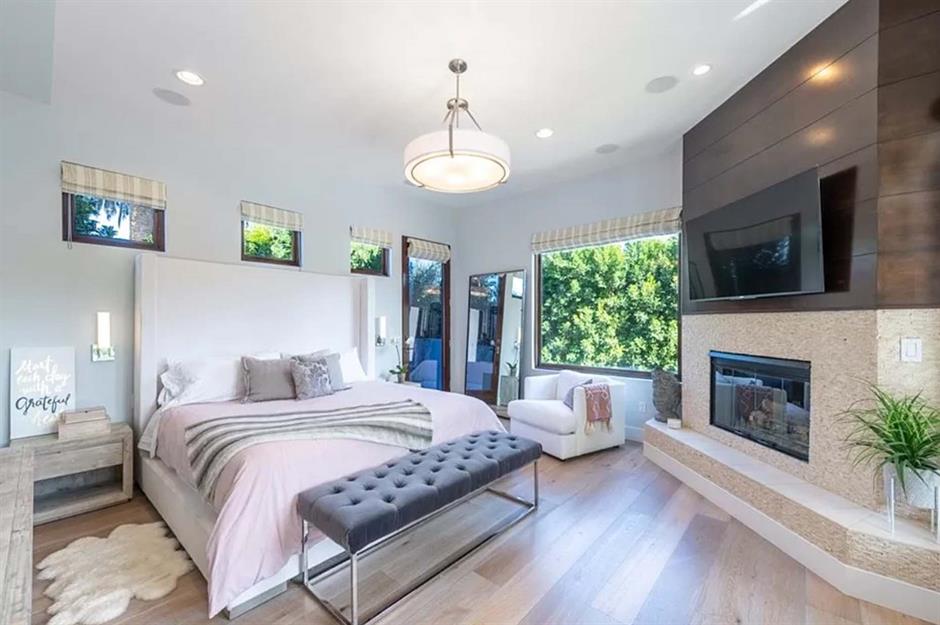 Her room features a king-size bed, a wall-mounted television, and an open window

The main bedroom features its very own private balcony.

There are numerous large windows installed throughout the room to let in natural light.

In terms of the mansion's comfort room, the bathroom has tiles made of Carrera marble.

It also has a built-in soaking tub and large windows that give you a peaceful view of the beautiful outdoor space.

Because of the close relationship that she shares with her family, it is reasonable to anticipate that they will frequently pay her a visit.

Zendaya expressed in an interview:

As I've gotten older, I've realized my true models are my parents. My mom is like a sheroe. My dad is so strong. I look up to my big sister and realize the influence she's had on me and making me a better person. Having such a big, grounded family, I realized as you get older how important that is.

Two bedrooms and a bathroom are provided for her guests who wish to remain for an extended period of time in the guest home. 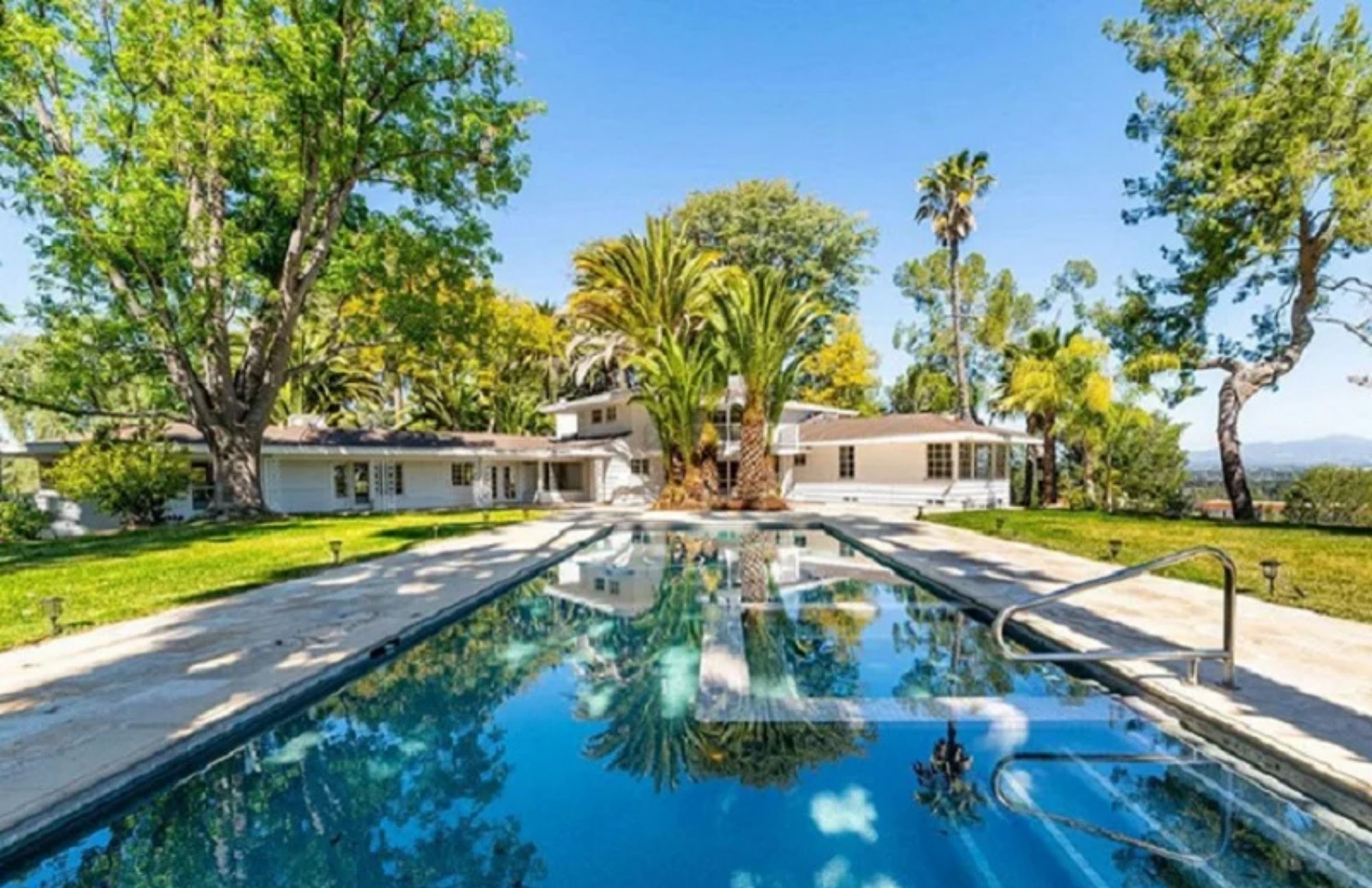 When the weather gets hot in the summer, everyone wishes they had a swimming pool to cool off in.

In fact, pools provide low-impact exercise that keeps stress off the joints for older people with arthritic conditions or those recovering from an injury.

This long, sleek pool has a built-in hot tub and is surrounded by tall palm trees.

Zendaya will feel like she is at a resort right in her own backyard.

We can only hope that she plants more fruit trees like she did at her Northridge home, which would be the perfect addition to her acres of land.

Zendaya Is Surrounded By The Famous Stars

When you go to the grocery store or gas station in Encino, you are sure to see some famous people.

Gwen Stefani and her husband, Blake Shelton, Kelly Clarkson, Channing Tatum, and Selena Gomez are just some of the famous people who have bought homes in Encino.

Encino is thought to be the best suburb in Los Angeles because it has streets lined with trees, gourmet restaurants, and quiet neighborhoods that are only 15 minutes from Hollywood.

Does Zendaya Live With Her Parents

Zendaya on the Perks of Living with Her Parents

Where Is Zendaya Right Now

Zendaya keeps acting. She is also a producer for the upcoming movies A White Lie and Be My Baby, and she is a spokesmodel for Lancôme, Bvlgari, and Valentino.

She decided on purpose to give up music and focus on acting.

I got worn out on music, because the industry felt like it wasn't really for the music, and it didn't make me happy. So I allowed myself to step away from it until that passion comes back or until I'm ready to step back into it.

Where Does Zendaya Work

She was shown in an ad for iCarly toys.

She was also a backup dancer in a Sears commercial with Selena Gomez, who is a Disney star.

What Part Of LA Does Zendaya Live In?

Zendaya lives in the Los Angeles suburb of Northridge, which is around 30 miles north of downtown.

How Much Money Does Zendaya?

Zendaya's net worth is expected to be $15 million in 2022. This is according to several credible sources, including Celebrity Net Worth.

The author hopes you enjoyed this sneak glimpse of Zendaya's LA Mansion.

We know that Zendaya purchased her Encino home in 2020, but it's not known if she's already moved there.

Fans have yet to see a photo of Zendaya's Encino home because she currently lives in Northridge.

While a tour of a vacant house is always interesting, seeing the finished product will be breathtaking.