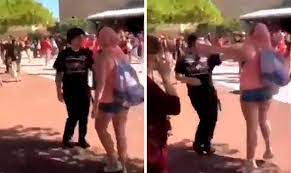 After assaulting a girl who had been witnessed forcefully punching him only moments before, a young guy has been suspended from school. Bullies may be found in all walks of life and are difficult to avoid even in the best of circumstances.

You think when you’re at school that the people responsible will soon grow out of it, but even when you get to older and start going on nights out, you notice people in their droves who seem to go out exclusively to make people feel uncomfortable and start fights.

It’s a pretty weird state of mind that someone has to be in to act out like that for seemingly no reason, and one girl seems to be in that headspace as footage recently showed her aggressively hitting and chasing a boy around a school courtyard.

What Happened When The Boy Hit The Girl Bully?

The boy persists to keep her at an arm’s length as he backs away while the girl shouts at him, daring him to hit her.

Eventually, the girl hits the boy one too many times, so the boy hits back with an apparent “open-handed slap”. The girl’s friend jumps in and starts attacking the boy, who hits her also.

At this point the crowd who were all happily watching jumped in to defend the girls, including a teacher who seemed to be there the entire time.

What did the boy say who hit the girl bully? The boy has since spoken out on Twitter about what happened, posting screenshots of a statement on his notes app (they’re pretty hard to read… not because they’re harrowing or anything though.)

“So basically me and my friends talking and we hear her say that the school is dumb ass sh*t for running a dance after the tragic we had this morning and my friends said that the school can we whatever they want and she didn’t like that and she said that ‘everyone that goes to that dance need to get shot and put into a grave’ and me and my friends were like this b**ch crazy and she started yelling at my friend and I started to laugh and she said she will ‘smack that smile on my face’ and I said ok whatever and she said ‘you think I’m playing games’ I continued to say whatever and she was like ok after class you will see.

I said ok and we got out of class and I walked out of the 2000 building and she said ‘hey pussy we’re are you going’ I then turned around and looked at her and then she started yelling in my face and she started to get close to me and that’s when the video started. I walked backwards all the way to the vending machine and her friend dropped her bag like she was about To do something so I dropped my bag and then I continued to say back up I don’t wanna get mad and then she swung at me and then I said ‘last time do not touch me’ and then she started yelling in my face again as I’m still trying to get her the fk away from me and then she swung again so then I slapped her with a open hand and then her friend grab and rips my t-shirt and I turn around and hit her, then she come back and then I hit the crazy bch again then a teacher split as up.

What I did was f**ked up and I wish I could change it, but I didn’t want to turn my back to her and have both of them behind me so that’s why I did what I did.“