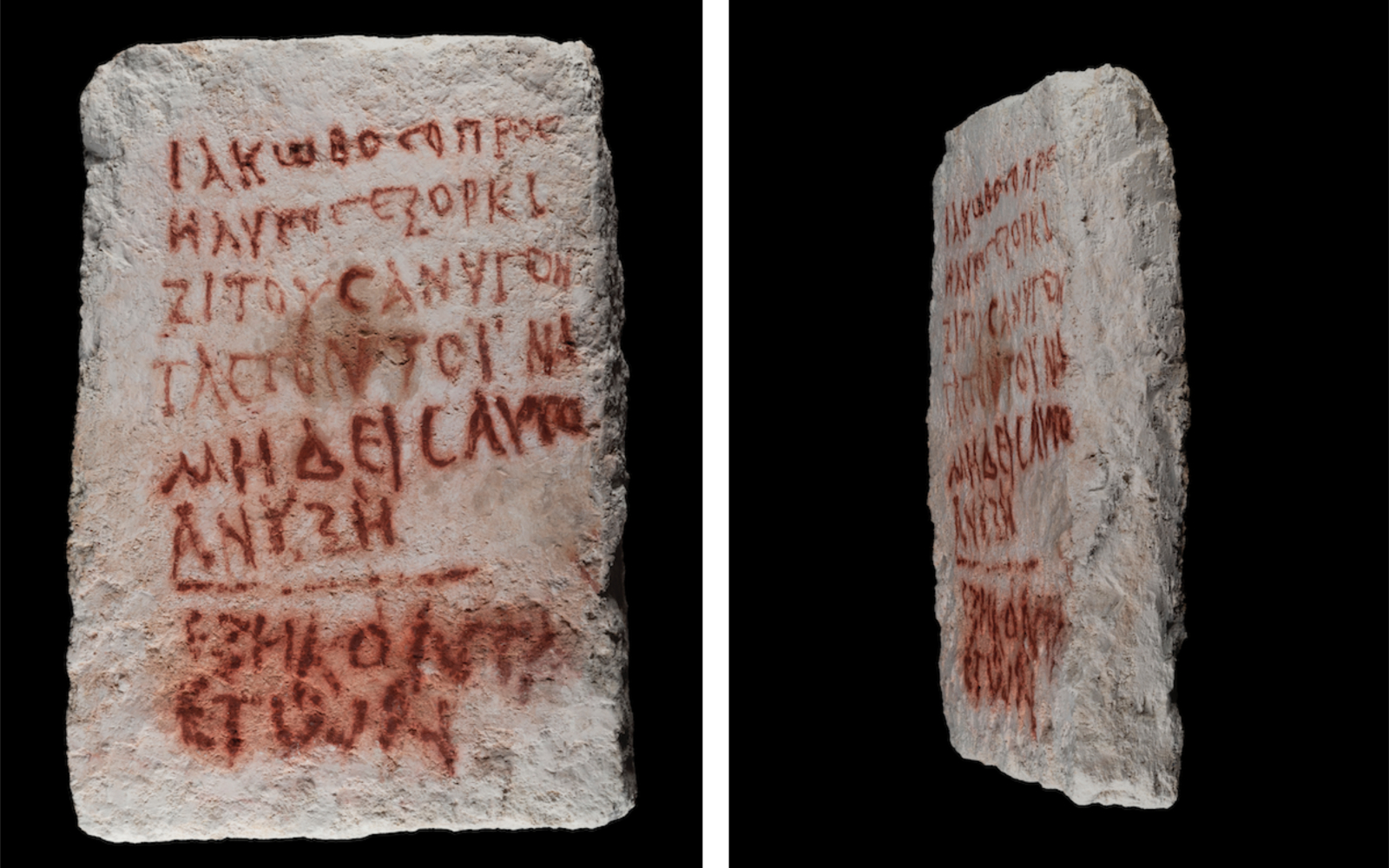 The sign, which was found a year ago in the national park, was revealed in a press statement that was issued jointly by the University of Haifa and the Israel Antiquities Authority in advance of a one-day symposium that was held on June 1.

According to Eli Eskosido, the head of the IAA, the inscription was given to the IAA, and the organization is currently trying to maintain it so that it can be displayed at some point in the future.

This "convert" inscription and another written on a wall alongside it are the first ones to be identified in the Beit Shearim necropolis in the past 65 years, despite the fact that over 300 inscriptions were written in four different languages have been uncovered there so far.

In addition, this is the first article that specifies, without a shadow of a doubt, that a convert is laid to rest at that location.

The inscription is thought to date back to the late Roman or early Byzantine periods and reads, “Jacob (Iokobos) the convert swears upon himself that any who open this grave will be cursed.”

After that particular sentence, there is a thick red line that has been drawn, and another scribe has written "aged 60" below it.

This grave marker was written in "odd," redundant Greek, according to Professor Jonathan Price of Tel Aviv University, who deciphered the inscription.

While it is very common to have a formulaic curse warning against the opening of a grave — which was generally shared by several corpses — this marker was composed in "odd," redundant Greek. Price quoted, “That’s how he spoke, apparently.”

According to Price, in the ancient world, it was not uncommon for persons to construct their burial markers prior to passing away. This practice was common.

Therefore, it is reasonable to consider the "curse" to be Jacob's own words when he spoke them. “I’m sure he prepared his stone before he died. Whether he wrote with his hand or not, we can’t know.”

Price noted that the shape of the letters is “pretty good relative to other homemade inscriptions,” despite the fact that it is impossible for us to determine whether or not the man wrote them by hand.

It is believed that the senior rabbi of the second century CE, Judah HaNasi, who is credited with redacting the Mishnah and was the leader of the Sanhedrin, was laid to rest in the UNESCO World Heritage Site of Beit Shearim.

According to Price, in the years that followed his burial, Jews from all across the region made significant attempts to be buried there as well.

According to Price, “Beit She’arim is known for being an international burial ground for Jews from all over the east,” including Jews from Yemen, Palmyra, and all around the ancient Holy Land.

“Who knows where he [Jacob] came from,” Laughing, he replied, “And we will never know unless we find his diary, which we won’t.”

Price is operating under the assumption that the man's first language was Greek.

“His funny Greek doesn’t mean he felt uncomfortable in Greek.”

According to Price, the inscription is composed of four different parts.

First, it reveals that the deceased person's name was Jacob, which in Greek is written as Iokobos.

It's possible that this wasn't his birth name but rather a moniker he adopted later in life. And secondly, he passed away at the age of sixty.

It is via the usage of the Greek term "proselyte" that we come to understand that Jacob is a "complete convert."

According to Price, during this time period there existed a different subgroup of semi-adherents known as "God-fearers."

These individuals would not have adhered to all of the laws nor would they have likely been circumcised.

The final piece of information that can be gleaned from the gravestone is the cautionary note stating that the grave should not be opened.

However, according to Price, the location of the grave is hardly significant because the grave marker was almost definitely moved by ancient robbers.

Yehonatan Orline, the chief of preservation for Parks and Recreation, was exploring a cave that had been unexplored up until that point when he came across the marker.

He discovered it leaning against a wall in a burial cave. According to Price, a second inscription had been carved into the wall adjacent to the first one.

This second inscription positively identified one of the people who had been interred in the neighboring burial niche.

In a statement, the head of the excavations at Beit Shearim at the University of Haifa, Professor Adi Erlich, remarked that it is remarkable that evidence of continuous conversion to Judaism can be found in an era in which Christianity was becoming the predominant religion.

According to Erlich, “The present find is one of the few which note the word ‘convert’ in the late Roman era.”

According to Erlich, the inscription provides information regarding life in Galilee during the late Roman and early Byzantine eras.

Galilee served as the primary location for Jewish colonization following the fall of Judah during the Bar Kochba revolt in 135 CE.

“Despite the decline of Judea, and after a number of failed Jewish revolts and the strengthening of Christianity and its spread in the empire, we see that there are still people who choose to join the Jewish religion and even proudly declare it,” said Erlich.

A Reddit user, SeaHawk96, shared, "As someone who speaks Greek, but not well versed with ancient Greek, I think I understand the last two words "Εξηκοντα ετών" meaning sixty years (?)"

And it is translated as 60 years by researchers too. Good job man!

Who Deciphered The 1800-Year-Old Grave Marker In Red Ink Found In Galilee, Israel?

The inscription was constructed of unusual and verbose Greek, according to Professor Jonathan Price of Tel Aviv University, who was in charge of decoding the inscription. This suggests that the message may have been recorded exactly as Jacob delivered it.

What Was The Message Written On The Gravestone?

There was a chilling statement engraved in Greek characters that read, "everyone who opens this grave is cursed." The letters of the grave marker were drawn in blood-like crimson ink.

How People Reacted To The 1,800-Years-Old Gravestone?

The inscription makes it abundantly apparent that anyone who opens the grave will incur the wrath of a curse and put themselves in danger. People, upon seeing the photographs, share the attitude of the owner of the tomb and believe that the powerful curse will affect all of humankind if it is not taken seriously. These people believe that the curse will harm all of humanity if it is not taken seriously.

What do you think of this eerie 1800 year-old grave marker in red ink found in Galilee, Israel?

Have you heard about Ayumi Takada and her really stretchy ears?