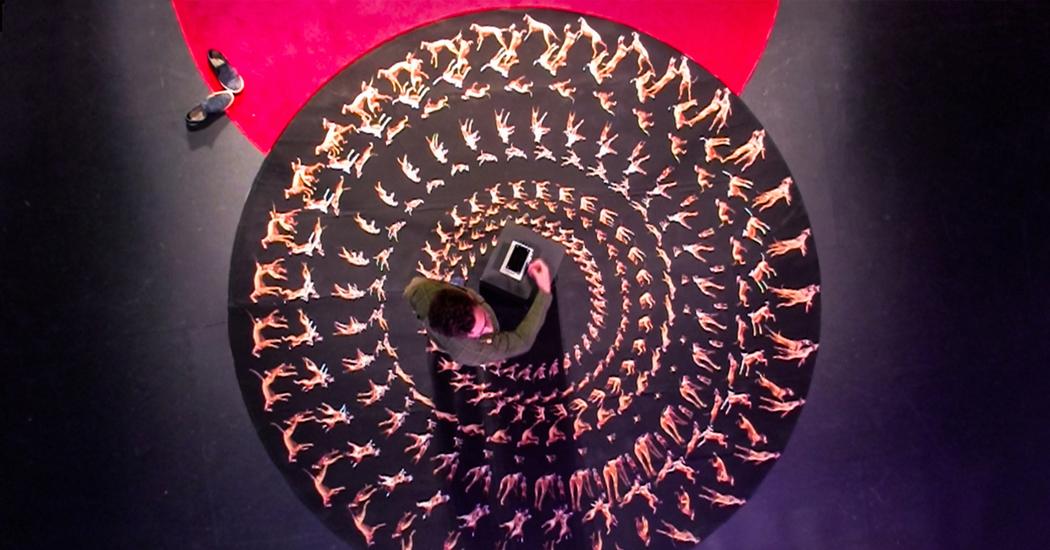 3D zoetrope uses the same premise as Czermak (1855) and Desvignes (1860) in their predecessors. In 1887, Étienne-Jules Marey utilized a gigantic zoetrope to animate plaster replicas of birds in flight. Modern counterparts generally use a fast flashing strobe light to highlight the models of 3d zoetrope, generating considerably clearer and sharper results.

The models are mounted on a spinning base, and the light flashes on and off as each model goes by. The stroboscopic effect makes them appear to be one. The animated objects can appear to move slowly forward or backward depending on how much faster or slower each rotation is than the accompanying series of strobe flashes.

A zoetrope is one of the numerous pre-film animation devices that creates the appearance of motion by presenting a series of drawings or photographs depicting the action in various stages.

It was essentially a cylindrical variation of the phénakisticope, which was proposed practically immediately after the introduction of stroboscopic discs in 1833. Milton Bradley created the definitive version, with easily replaceable picture strips, like a toy in 1866, and it was a huge hit. 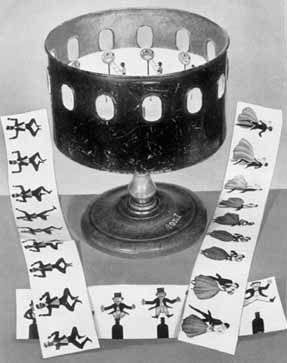 Zoetropes are cylindrical objects with vertical side incisions. A band of images from a sequenced picture set is on the cylinder's inner surface. The viewer views the images throughout the cylinder as it spins. A quick series of images is seen by the user due to scanning the slits. A similar instrument called a "cylindrical zoetrope" was invented in the late 19th century.

In addition, the phenàkistope This device, like its predecessor the phenakistoscope, works on the same concept but enables multi-user viewing. The graphics illustrating stages of motion are not radially placed on a disc, but on a paper strip instead. A vertical viewing slit across each picture allows for easy viewing. The drum is spun on a spindle base. The animation appears smoother as the drum is spun faster.

A 5000-year-old Iranian pottery bowl may be a zoetrope forerunner. This bowl is painted with representations of a goat eating leaves from a tree. However, because the pictures are sequential and seem uniformly scattered around the bowl, the bowl must rotate quickly and steadily while a stroboscopic impression is created. So it's unclear if the artist who made the bowl intended to make an animation.

An ancient Chinese mechanical engineer and craftsman named Ding Huan created a lamp with a circular band of images of birds and animals that rotated "quite naturally" when the lamp's heat caused the band to rotate. It's unclear if this caused the appearance of motion or merely interpreted the spatial movement of animal images.

Joseph Needham, a historian of Chinese technology, called it "a sort of zoetrope" that "may well have originated in China." Paintings on thin paper or mica adorned the sides of a light cylindrical canopy with vanes. Placing it over a bulb gives the illusion of animals or people moving. Needham mentions other examples of figures moving after a candle or lamp is lit, but these are semi-fabulous or can be compared to heat-activated carousels.

"Trotting horse lamp" may be the same or extremely similar to all of these early Chinese versions. It has cut-out silhouettes or painted figures on the inside and is rotated by heated air rising from a lamp. The dancing silhouettes project on the lantern's thin paper sides. Figures with jointed heads, feet, or hands might be actuated by an iron wire running through them. None of these lamps are known to use sequential picture substitution, hence they do not display animation like a zoetrope.

"The Mysteries of Nature and Art" by John Bate described a simple mechanism. It comprised of "a light card with multiple images on it" attached to the four spokes of a wheel heated inside a glass or horn cylinder, "such that the images would appear to be moving". A simple four-phase animation mechanism was exhibited and explained in Henry V. Hopwood's 1899 book Living Pictures (see picture).

Hopwood supplied no name, date, or other information about this rotating toy. This instrument was called L'Animateur and was sold by a Parisian business circa 1900. (or The Animator). However, as shown in the illustration, Bate's gadget appears to have moved the images rather than animated them. 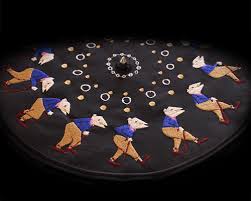 A 3D zoetrope kit containing characters from the animated film My Neighbour Totoro is on display at the Ghibli Museum in Tokyo, Japan.

The zoetrope is part of an exhibit that explains the basics of animation and historical technologies and is accompanied by an explanatory display.

For its traveling exhibition, Pixar constructed a 3D zoetrope inspired by Ghibli's, which debuted at the Museum of Modern Art in New York City and featured characters from Toy Story 2.

One was originally located at Disney California Adventure, Disneyland's sister park, but was later relocated to The Walt Disney Studios Lot in Burbank, California.

Since 2005, the original Toy Story Zoetrope has been shown in 34 national museums and art galleries in 18 countries.

Since the late twentieth century, zoetropes have been used on occasion for artwork, entertainment, marketing, and other media applications, most notably as linear zoetropes and three-dimensional zoetropes.

Making a zoetrope has also become a fairly typical arts and crafts assignment and a way for educational programs to demonstrate some of the technical and optical concepts of cinema and motion viewing.

In Vermont, the American firm Optical Toys reproduces a paper zoetrope that was initially published as a newspaper supplement in the Boston Herald in 1896.

There is a Reddit video about the 3D zoetrope of frogs and lotus flower stop-motion art, that when set at the appropriate speed gives a really good animation impression.

"It literally came to life all of a sudden. Very cool."

Or just a really different view of Healthy-Detective169:

How Many Frames Is The Zoetrope?

In an ideal world, you'll have 24 frames per second. The minimum age is twelve. If your zoetrope can spin at a rate of one rotation per second (which is quite fast), you will require 12 frames to eliminate flicker.

A 3D zoetrope is a synthesis of traditional and modern animation techniques. Animation and film rely on motionless pictures being flashed rapidly in front of our eyes to give the human brain the illusion of motion.

This effect is achieved in the 3D zoetrope by using static objects, a flashing light, and a spinning platform. The term zoetrope is derived from the Greek words "Zoe" which means "life" and "tropos" which means "turning."