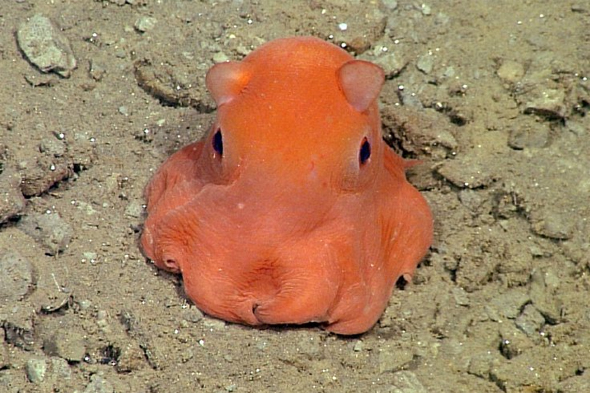 Exploration teams have caught film of the deepest-known octopus, showcasing a delightfully pudgy Dumbo octopus floating in what is known as the hadal zone, where not even a drop of sunlight can penetrate.

According to National Geographic, the dumbo octopus (genus Grimpoteuthis), with its small stature and two rather prominent fins that resemble the famous Disney character's ears, is sometimes referred to as "the cutest octopus in the world" because of its appearance.

Additionally, it's known to reside more than 2 miles (3,200 m) below the ocean's surface, making it one of the deepest-known octopuses. 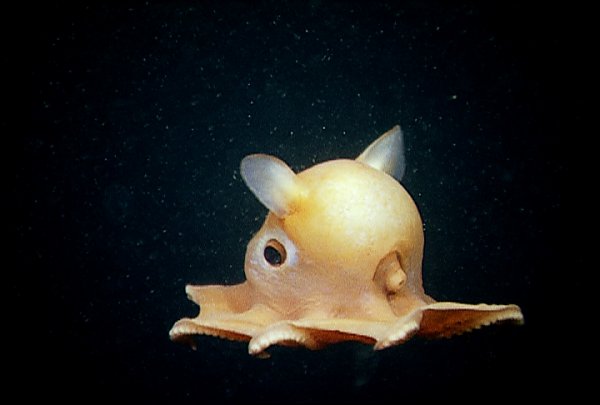 When Was The Dumbo Octopus Discovered?

According to a recent study published on May 26 in the journal Marine Biology, the newly discovered critter was discovered more than a mile deeper than any other octopus has ever been discovered before. Another Dumbo octopus living 3.6 miles (5,760 m) below the surface was also documented.

According to National Geographic, dumbo octopuses are "cirrate" octopuses, which means they have protrusions called cirri that protrude from their suckers and have an unknown purpose. Cirrate octopuses are part of the hadal community, according to the authors of the research, who state that their observations "unambiguously" prove this.

Typically, the hadal zone is more than 3.73 miles deep, making it the deepest portion of the ocean (6,000 m). As a result of the fact that both octopuses were found in the same region, it is difficult to determine whether such octopuses are found in this depth all over the world or if this was "the result of chance encounter with an abnormally deep population," as the researchers put it.

According to Alan Jamieson, the expedition's chief scientist who is also a senior lecturer at Newcastle University in the United Kingdom and the CEO of Armatus Oceanic, a deep-sea consultancy, in order for these creatures' bodies to survive at such depths, they must have evolved to withstand the extreme pressure of the deep sea."They'd have to do something clever inside their cells. If you imagine a cell is like a balloon — it's going to want to collapse under pressure. So, it will need some smart biochemistry to make sure it retains that sphere," he explained.

The video provided below is on Reddit nowadays in which a dumbo octopus is caught in Hadal Depths.

"...and then it turns out that's just a polyp on it's tongue. The sand parts as gigantic razor sharp teeth emerge from the ocean floor. A jawed monstrosity the size of a house bursts from the sand, it's eyes black and remorseless."

Because dumbo octopus is naturally rare, and the deep sea is vast, these species have developed particular behaviors to maximize the possibility that they will be able to successfully reproduce whenever they locate a mate, regardless of the circumstances. Despite the fact that they spend the majority of their life floating above the seafloor, dumbo octopuses lay their eggs on the seafloor, sometimes adhering to rocks or other hard objects. 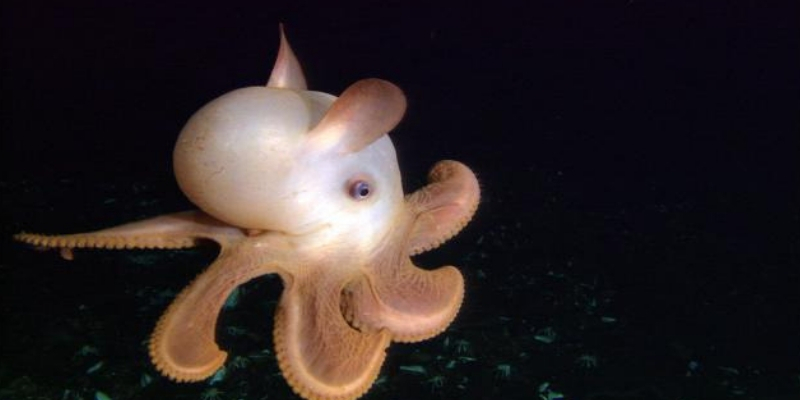 Orange and white dumbo octopus in the deep sea

What Is The Deepest The Dumbo Octopus Can Go?

In the deep open ocean, dumbo octopuses can be found living down to depths of at least 13,100 feet (4000 m) and possibly considerably deeper, making this species the deepest-lived of all known octopuses. It is necessary to be able to survive at these high depths in extremely cold water and in utter darkness in order to survive.