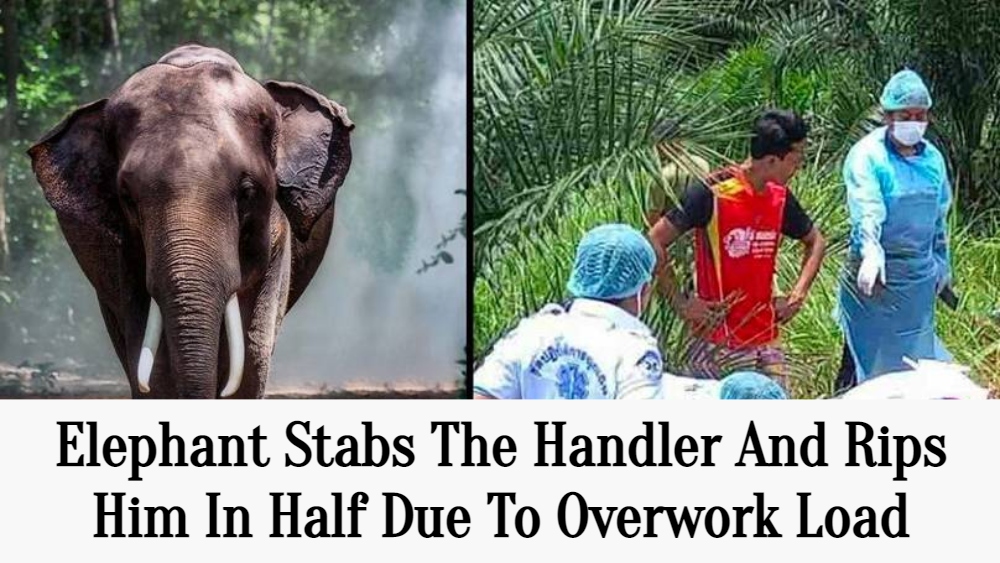 An elephant stabs the handler and rips him in half due to overwork load in the sweltering heat as said by police in southern Thailand.

Authorities think the animal, Pom Pam, became irritated because it had to move rubberwood at a plantation in Phang Nga province in the sweltering heat. 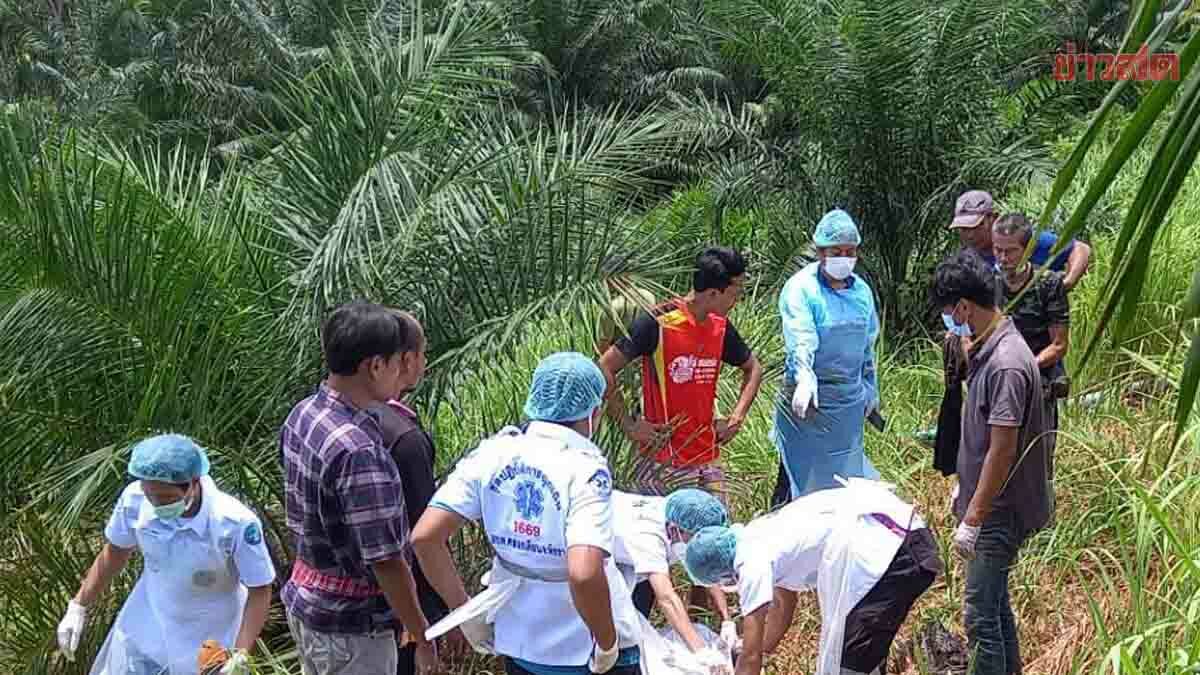 A team of govt. officials investigating an elephant attack on a human in the forest

Pom Pam, a 20-year-old elephant, tore his 32-year-old handler Supachai Wongfaed apart after stabbing him with his tusks.

According to sources, Wongfaed, the son of the former mayor of the Khok Charoen subdistrict, was found ripped in two and lying in a pool of blood by neighborhood police, the village chief, and emergency personnel.

According to Thaiger, after the elephant was shot with a tranquilizer dart by livestock officers, his body was eventually found.

At least 20 people are murdered by elephants in Thailand in 2020, an unusual but rising trend.

Wild animals are usually friendly, but they can turn mean if they feel bothered, exposed, or threatened just like this incident in which an elephant stabs the handler and rips him in half due to overwork load.

Another event happened last month in the province of Nakhon Sri Thammarat.

According to the outlet, police believe that in that particular instance, a stressed-out elephant killed its handler by stabbing him to death and then standing over his body for several hours.

Duncan McNair, who runs the nonprofit Save The Asian Elephants, says that when Asian elephants are forced to do hard jobs like logging, they suffer both physically and mentally.

[It] is yet another stark reminder that Asian elephants are and always remain wild animals that can attack and kill when they are abused or overly stressed by humans.

According to the outlet, despite Thailand's 1989 ban on the practice, using Asian elephants to transport logs still happens in some regions of the nation.

Elephants don't grow more hostile in hot weather, contrary to what the police state, according to Niki Rust, an environmental social scientist who specializes in conflicts between people and wildlife.

But in an interview with Newsweek, she said that changes in the climate, like a lack of food and water, could cause stress that could lead to violence, especially among herds.

What does happen is that wildlife becomes more desperate for food and water as climate change affects the things that they depend upon to survive.

Long before climate change was a problem, elephants have been known to demolish wells and bore holes in quest of water.

Every year, over 500 people in India are killed by elephants, frequently during episodes of crop robbery.

Lydia Tiller, the research and science manager for Save the Elephants' human-elephant coexistence program in Kenya, says that conflicts between people and elephants have gotten a lot worse all over Africa. 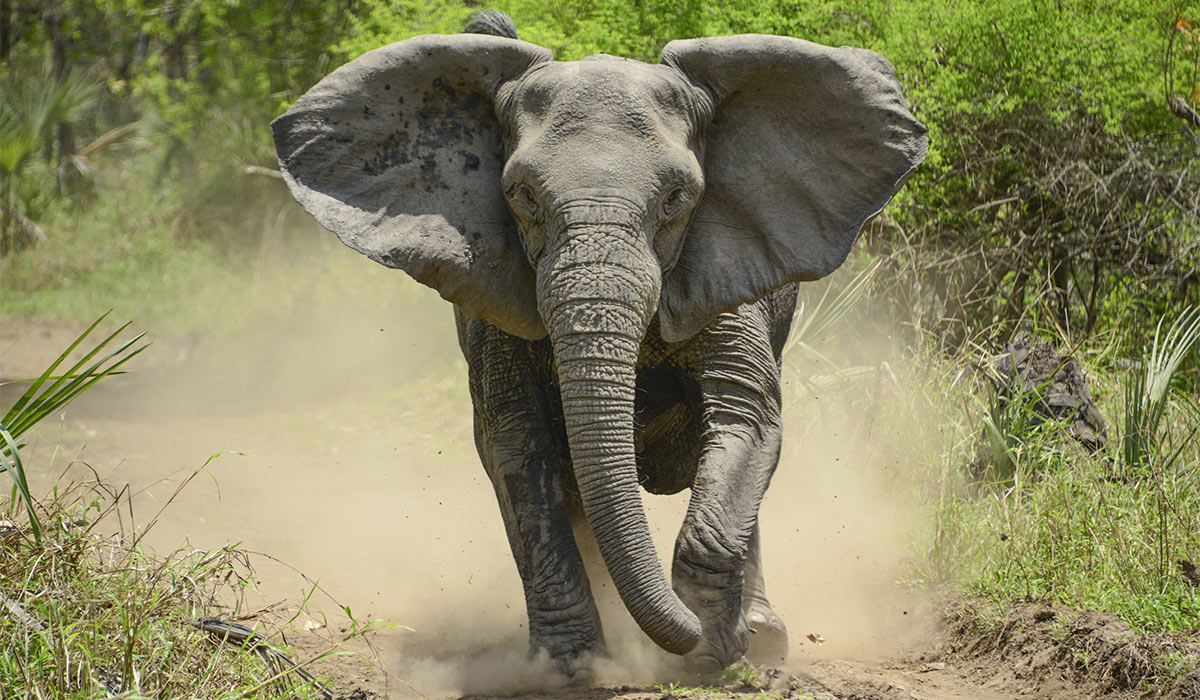 An elephant running in the forest

"Unfortunately, we do not know the full picture of the long-term impacts of climate change on elephants...

The number of elephants being killed due to conflict has increased," she added.

The Times of India says that on June 9, 2022, 68-year-old Maya Murmu was getting water in India's Mayurbhanj district of Odisha when a wild elephant from the nearby Dalma Wildlife Sanctuary attacked her.

As Murmu tried to run away, one of the elephants charged at her and stepped on her.

According to The Print, she was rushed to a hospital where she later passed away from her wounds.

Murmu's family received her body back that evening, and her final rites were started by her relatives.

The animal reappeared, stormed the funeral, removed the body from the pyre, and then tramped on her body.

The National was informed by Inspector Lopamudra Nayak of Rasgovindpur police station that "her family kept the body outside the house for the funeral [and this was when] the animal again came and attacked her."

When additional elephants in the herd responded to the call, they attacked the village and destroyed Murmu's home as a group.

A few hours later, when the family was certain the elephants had left, the final rites for Murmu were carried out.

It is unknown if the wild elephant has injured anyone else.

According to the World Wildlife Fund, elephants kill around 100 people in India every year, while this number may reach 300.

According to The National, approximately 600 people were murdered by elephants in the Indian state of Odisha between 2014 and 2021, which has had the most fatalities.

Conflicts Between Human And Elephant In Thailand Due To Habitat-Loss

Thailand is mostly Buddhist, and the national religion says that elephants have the best qualities of the Buddha himself.

Elephants are often used as religious and national symbols in Thailand.

Even so, three Buddhist monks were killed by wild elephants in three separate incidents, even though elephants were thought to be sacred animals.

Many of the faithful were surprised to learn that wild elephants had killed the monks.

Attacks on humans are uncommon in Thailand, but they do happen occasionally.

Over the past century, the number of elephants in the country has gone from 100,000 to a few thousand, and even the few thousand that are left are having trouble in their natural habitats.

Wild elephants don't have enough room to roam or food because once-lush local forests have been cut down or are becoming more and more fragmented.

To get food, they regularly stray into populated areas.

Experts claim that as a result, conflicts between elephants and people have increased.

Elephant expert Pichet Noonto cautioned in 2018 that "conflicts have now been found in 41 areas where wild elephants are prevalent, up from only 20 back in 2003."

Elephants are reported to have killed up to 45 people between 2012 and 2018, while also injuring another 30.

The last 3,500 or so wild elephants in the country still roam the forests of national parks and wildlife sanctuaries, posing a threat to local villagers who live nearby.

Since then, there have been ongoing conflicts between elephants and people in various parts of Thailand.

For instance, in the northeastern province of Buri Ram in July of last year, one of three wild elephants who were feeding at a cassava plantation assaulted a farmer and his wife.

The husband was shot in the chest and died, but his wife managed to flee with only minor wounds by pretending to be dead and hiding under a passing truck.

Elephants are not exempt from violence either. At least 20 of Thailand's highly endangered wild elephants were murdered between 2012 and 2018 by villagers trying to keep the pachyderms away from their crops during the same six-year period.

According to a Thai newspaper, "Electrified fences are the single largest cause of elephant deaths, accounting for 72 percent of the fatalities."

While some jumbos die in accidents trying to cross highways from one area of woodland to another, traps and poison can also be deadly to foraging jumbos.

It's encouraging to see how many farmers are turning to safer jumbo deterrent techniques, including erecting beehives around their fields. 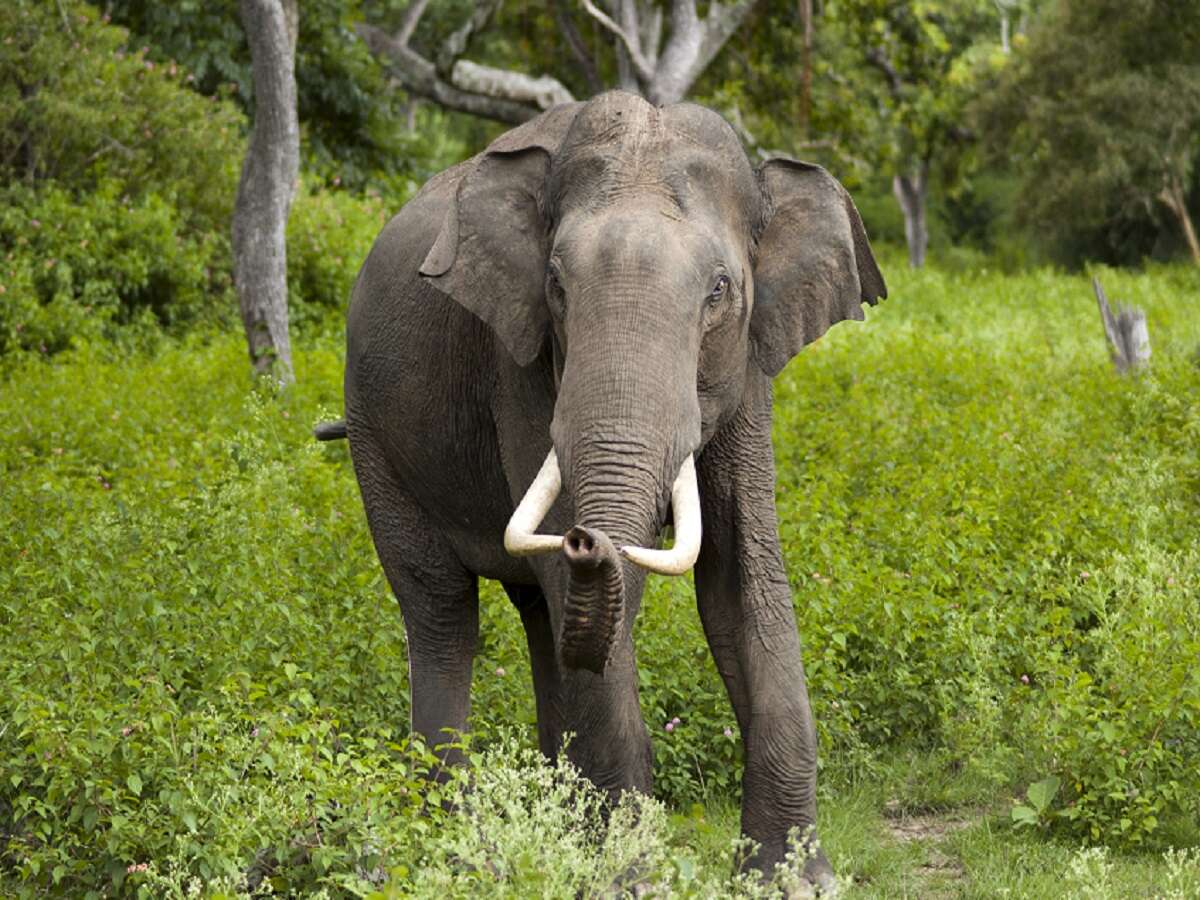 An elephant walking in the forest

Bee stings can't penetrate elephant skin because it is too thick, although pachyderms have sensitive parts like their mouth, eyes, and the tip of their trunk.

The elephants are aware of the serious harm that a swarm of bees may do to them.

According to the International Union for Conservation of Nature, "Elephants, revered and loved for ages in Thailand, have lately become a problem.

Human settlements are expanding into elephant habitat, leaving wild populations of the species no other option but to invade human territory."

Do Elephants Attack With Their Tusks?

Yes, they can attack but in rare conditions. Elephants perform a multitude of functions with their tusks. They are mostly strong weapons that elephants use to fight other elephants or potential predators like the tiger, though tigers would only ever attack young or adolescent elephants.

Elephants are typically calm creatures. They can be particularly violent during musth, and females can be aggressive when there are small calves around. When ill, hurt, or harassed, all elephants have the potential to become aggressive. Elephants have three distinct ways of responding to danger or difficulty.

Can You Dodge An Elephant?

Yes, you can but you need to discover a means to avoid the elephant's feet and tusks if it is actually charging at you. If you move out of the elephant's line of sight, it may lose interest in attacking you.

The elephant stabs the handler and rips him in half due to overwork load in Thailand.

It was a scary incident for the locals and the reason for this might be habitat loss.

So, as humans, you should be careful towards the environment so that incidents like these could be avoided in the near future.