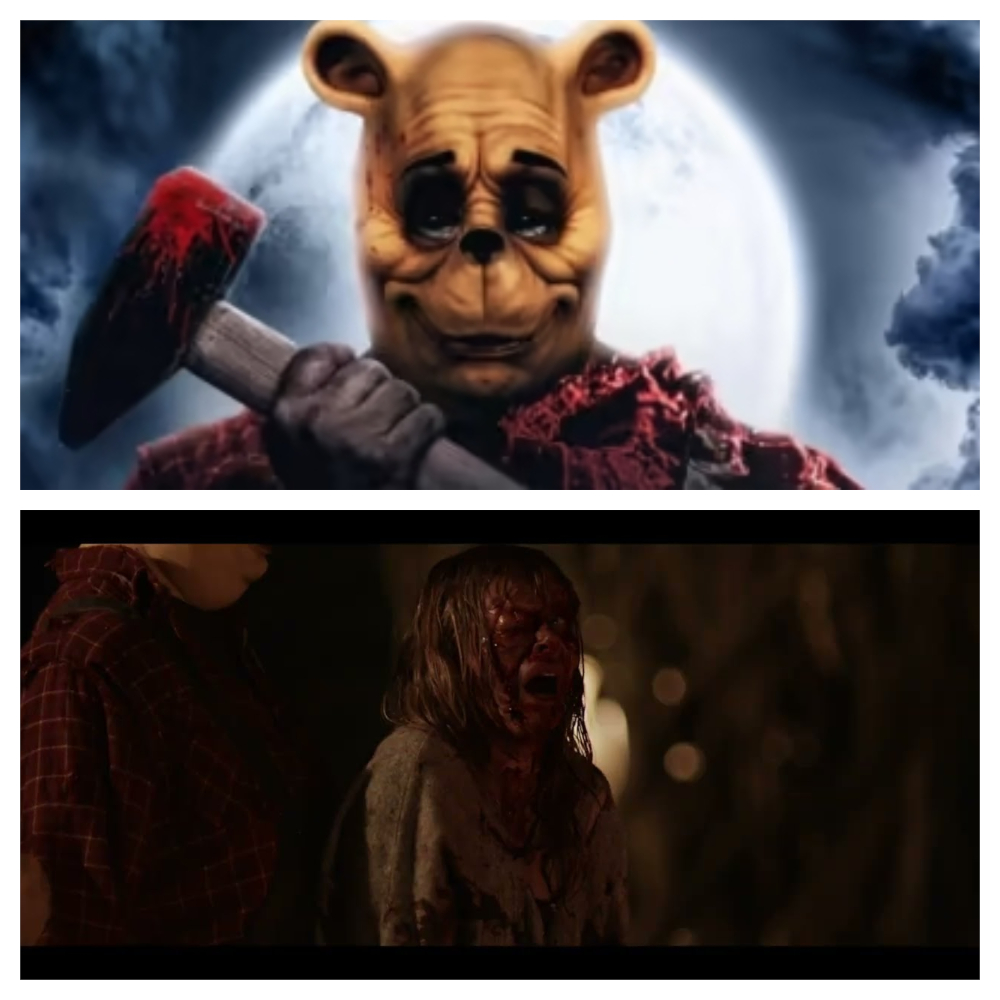 This has nothing to do with the cherished Disney property or those particular characters. LOL.

For those who are unaware, the original Winnie-the-Pooh stories by author A.A. Milne entered the public domain at the beginning of this year, and these filmmakers jumped at the chance to base their idea on that.

The movie was shot in England in about 10 days. It is literally the exact time. People are saying that the next movie should be a Winnie-the-Pooh-inspired Oceans 11-style heist movie where the entire gang tries to steal a lifetime's worth of honey. 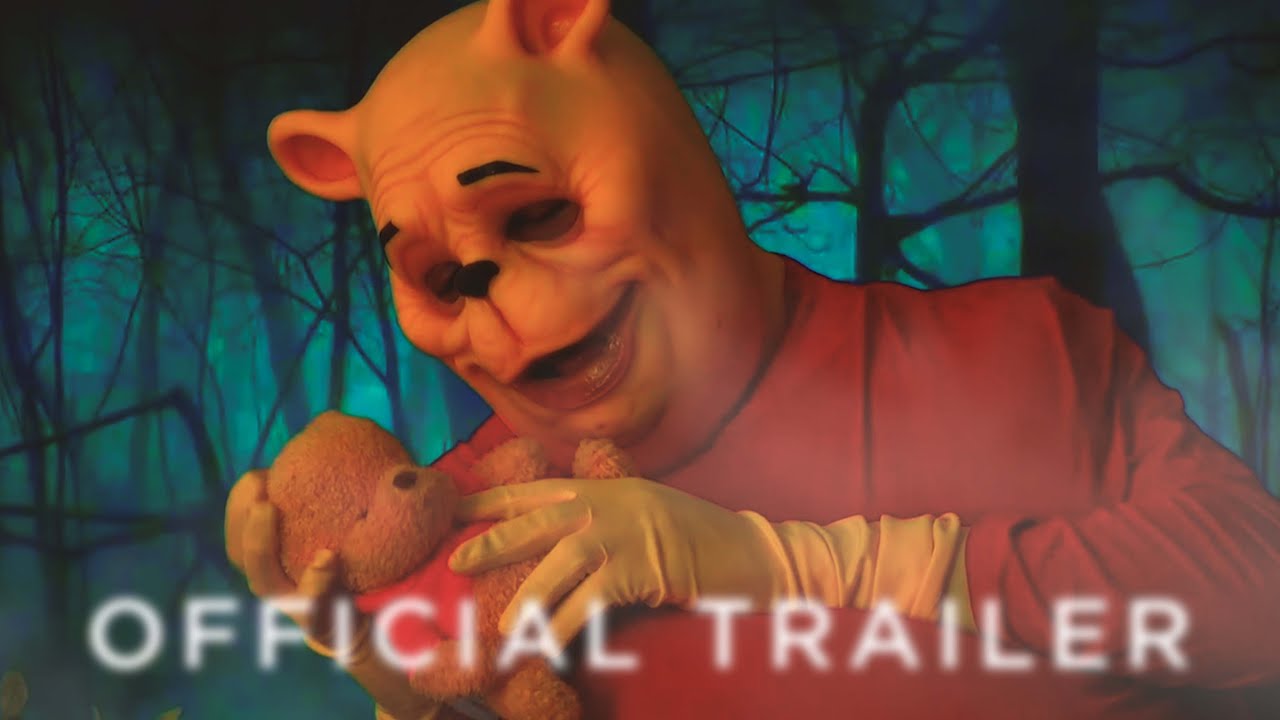 The first trailer for Winnie the Pooh horror film has been released. Below are some queries that you must be thinking about.

Is Pooh here just a weird guy dressed as a bear? Are we supposed to believe it's a bear when it's not? Or was Christopher Robin simply mistaken in thinking that a man wearing a mask was a bear because he was a child and these grown-ups are now murdering people?

The movie appears to be a typical home invasion movie in the trailer. Although they are never shown face-to-face, Pooh and Piglet appear to be adult people dressed as animals, maybe as a tribute to the obscure Liv Tyler movie The Strangers.

A young woman wearing a bikini is forcibly abducted from one of Hundred Acre Wood's well-known jacuzzis, and the words "GET OUT" are daubed across some windows in blood. After taking a girl's eye and cutting off a woman's head in a pool, they eat honey as a ritual.

Blood and Honey would be the kind of low-budget horror that would be aggressively bound for the clearance rack if the antagonists had been anyone else.

But the identity of the opponents is essential to the plot of the movie. Winnie the Pooh was once known for his calm acceptance of the bigger world around him. In fact, some people thought he was a Taoist because of this.

He lived a modest life, appreciating each day as it arrived and being content to be a part of such a lovely planet. There is a big difference between that way of thinking and the way of thinking of a disgusting sentient pig-man who seems to get s*xually aroused by graphic violence.

Blood and Honey: Winnie the Pooh is aware of this, which is why all of its trading currency is in dispute. The film has already been dubbed "childhood-ruining" by Rolling Stone, and everyone involved in its production must be hoping that this narrative holds true until the movie's premiere.

Whether the movie is fantastic or not, it won't matter because the main goal is to defame an innocent icon like Winnie the Pooh. Additionally, the Milne estate ought to be really proud of this movie.

The fact that Winnie the Pooh has survived this long - the character is now 95 years old - while continuing to be so enduring that he can still be an instantly recognizable cultural touchstone in a micro-budget exploitative horror movie is a triumph in and of itself. It's true that they won't make any money off of it.

Anyone working in the creative industries would secretly be delighted to learn that something they invented would be the focus of a similar gorefest a century from now.

In the first teaser for the upcoming horror movie Winnie the Pooh: Blood and Honey, the titular bear is depicted as being far different from the amiable cartoon character from Disney. He is seeking revenge instead.

The trailer closes with a fairly literal depiction of "Bloody and Honey," with the two liquids being thrown into a vat together for unclear reasons, giving a hint of the horrors to come for the humans in the woods. It's sufficient to state that none of the participants appear to have had a fantastic trip.

Pooh and Piglet are played by Craig David Dowsett and Chris Cordell in human form. They are left behind when Nikolai Leon's character, Christopher Robin, leaves for college.

Pooh and Piglet go back to being wild animals and decide to kill people for food.

Because they've had to fend for themselves so much, they've essentially become feral. So they've gone back to their animal roots. They're no longer tame: they're like a vicious bear and pig who want to go around and try and find prey,

And if you were hoping to see Eeyore, you're out of luck. Pooh and Piglet ultimately decided to murder and eat Eeyore because conditions had become so desperate and there was no food left in the forest, according to Waterfield.

Oh. Right. You have undoubtedly also observed that Pooh and Piglet are the only figures you see with weapons. They've apparently killed everyone else, then.

Everyone's favorite bear has left the 100 Acre Wood and moved into the world of horror. In Rhys Frake-most Waterfield's most recent indie film, he plays the sleazy bad guy.

The teaser gives you a scary warning,

Christopher Robin has left the characters we loved as kids, and they have become wild.

The story opens with an adult Christopher Robin taking his future bride to the wooded area where he spent his formative years, declaring that Mary is the first person he has ever taken there. Christopher cries out to his old buddies, thinking they are "out there" somewhere.

However, it quickly becomes apparent that certain things have changed, and not for the better. After seeing a skull and Eeyore's grave, Mary tells Christopher to leave, but her boyfriend, who is wearing a cardigan, insists that he must find his animal team and stands his ground.

This turns out to be a bad decision, as Winnie the Pooh appears out of nowhere and starts wreaking havoc. He terrorizes a group of female friends at an isolated house in the woods, jumps on someone in the jacuzzi, and then loops off their heads with a long-handled mallet as they try to flee in the pool. 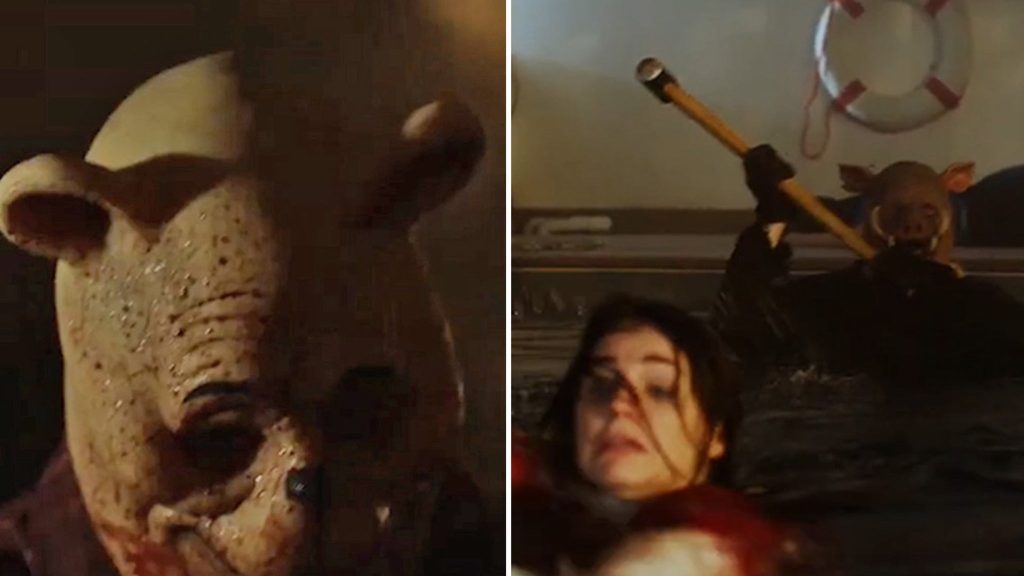 Winnie the Pooh face covered with splashes of blood; Piglet trying to kill a woman with hammer in pool

We used to be friends. Why are you doing this, please? I would have never left, I swear.

It comes out that Pooh and Piglet, who still harbor a lot of resentment toward Christopher after abandoning them, had devoured Eeyore.

Pooh and Piglet experience a drastic drop in food as Christopher grows up. Over the years, they have become increasingly hungry and feral. They had to resort to eating Eeyore.

Then Christopher returns with his wife to introduce her to his old friends. And when that happens, they get enraged when they see them.

All of the hatred they’ve built up over the years unleashes and then they go on this rampage. That continues when they end up at this rural house with these girls.

Following the probably fatal shooting of Christopher, Winnie and Piglet turned their attention to another group of unwitting victims.

The original stories by AA Milne became part of the public domain earlier this year, making the movie viable. However, some details, like Winnie the Pooh's red clothing, had to be changed to avoid copyright difficulties with Disney.

The Winnie the Pooh horror movie release date has not yet been announced.

Who Made Winnie The Pooh: Blood And Honey?

Director Rhys Waterfield's made Winnie the Pooh: Honey and Blood.

What Is Winnie The Pooh: Blood And Honey Based On?

It is basically a revenge story of Winnie the Pooh and Piglet in which they seek revenge from Christopher and start killing people.

Is Winnie The Pooh: Blood And Honey Disney?

No, it is not a Disney movie.

A precise release date hasn't been specified yet after the first trailer for Winnie the Pooh horror film has been released. But Winnie the Pooh: Blood and Honey is "coming soon" to DVD and video-on-demand in every country as said by the team of the movie.