The Complete Guide About The Great Blue Hole Of Belize 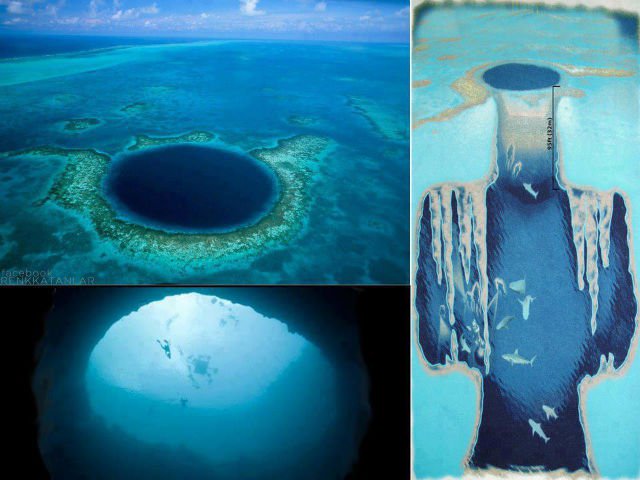 Great Blue Hole of Belize has 300 meters in width and 125 meters in depth. It is classified as a marine sinkhole since there is no life at the bottom of the pit due to a thick coating of hydrogen sulfide that prevents all oxygen from reaching the bottom and is harmful. 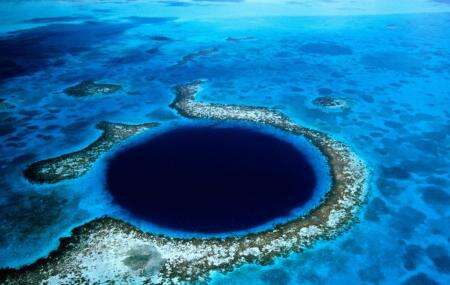 The Great Blue Hole Of Belize is a world-class destination for recreational scuba divers who are drawn to it by the opportunity to dive in crystal-clear waters and see a diverse array of marine life, including tropical fish and spectacular coral formations, as well as the opportunity to learn about the history of the area.

Nurse sharks, large groupers, and various varieties of reef sharks, such as the Caribbean reef shark and the Blacktip shark, can all be found in these places, as well as a variety of other marine life (Carcharhinus limbatus).

In most cases, dive tours to the inside the Great Blue Hole are full-day excursions that include one dive in the Blue Hole and two more dives in the surrounding reefs.

The Great Blue Hole, located off the coast of Belize, is a massive underwater sinkhole with a blue hue.

It is located in the middle of Lighthouse Reef, a small atoll located around 100 kilometers (62 miles) from the Belizean mainland.

The Great Blue Hole, the world's largest natural creation of its sort, is part of the wider Barrier Reef Reserve System, which has been designated as a UNESCO World Heritage Site by the United Nations Educational, Scientific, and Cultural Organization (UNESCO).

Glyn Collinson, a NASA scientist who recently dove into the Great Blue Hole, had this to say about the experience:

“It was the deepest, deep blue hole imaginable; A chasm that fell away deep into the deep, dark blue. It had been forged out of the solid rock as caverns, hundreds of thousands of years ago during the last ice age. For eons, water filtered through the rock and into these great stone cathedrals, breeding multicolored stalactites and stalagmites. Then, one by one they collapsed in on each other, creating a chasm four hundred feet deep. As Earth’s swollen polar ice-caps receded, the warm Caribbean ocean swept in to fill the chasm with boiling white hands, the last rays of sunlight struck the chasm’s floor. Then, as the limestone broke down, it began to rain tiny fragments of rock, which slowly began to fill the great Blue Hole.

"Alright," the divemaster said, jolting me back to reality. "Welcome to the Blue Hole. This one is real deep, starting with a drop off from forty feet that goes right the way down to the bottom past 400 feet."

The man held up a detailed custom drawn map of the site and pointed as he talked. "We will go down fast to one hundred and thirty feet where stalactites come down from this overhang. We will stay there for a maximum of twelve minutes, starting from the time that the first pair gets there. We all need to keep together and watch each other. To make sure that you all keep an eye on your depth, the dive pair who goes the deepest will buy a round of drinks for everyone back at the Island."

'Great', I thought, 'so much for pushing our depth limits.'”

The Belize Atolls' Origins Are Unknown

In the Caribbean, Lighthouse Reef, Glover's Reef, and the Turneffe Islands are all different outliers. Except for Chinchorro Reef off Mexico's southern Yucatan Peninsula, nothing else in the Western Hemisphere approaches a real coral atoll (just above the Belize atolls). They are even more remarkable, according to geologists, in that the genesis of their development does not appear to mirror the atolls of the Pacific Ocean, where coral rings are more well-known.

The ancient mechanisms that contributed to the construction of Belize atolls might have started as long as 70 million years ago, and the atolls did not form around subsiding volcanoes." Instead, they arose from atop massive fault blocks, with limestone-covered ridges that settled in a number of phases, creating a sequence of offshore platforms for coral development. With the gradual rising of sea level after the last ice age, coral development proceeded upward, resulting in the steep outside walls and shallow inner lagoon that characterizes these different structures. Many of the drop-offs around the Belize atolls are thousands of feet deep, while the shallow lagoons have depths of 10 to 30 feet. 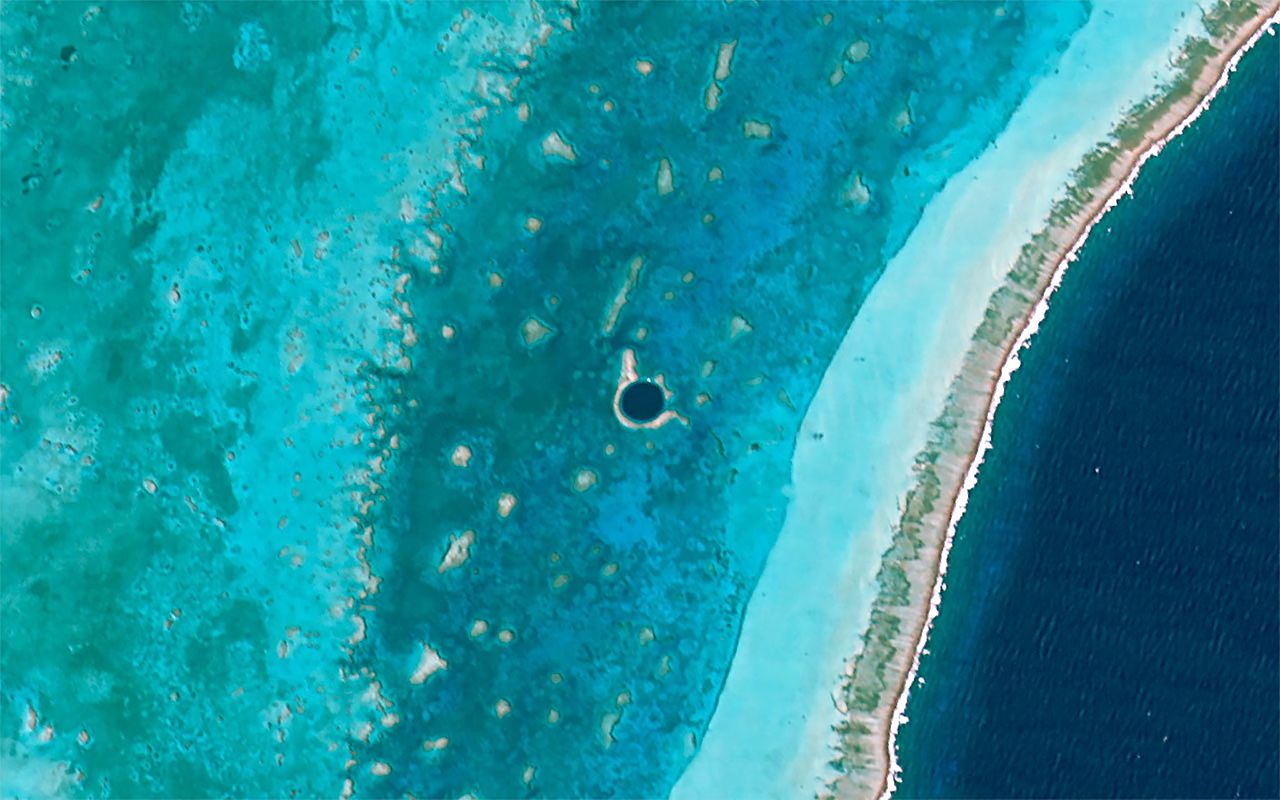 Canadian-Belizean diver Captain Ray says, “I was one of those early arrivals from the scientific and sport diving community, accompanying the Cousteau divers into the Blue Hole and participating in one of the first dive travel ventures along the Belize River.

“Because of the relative isolation, our atolls have remained nearly as pristine as I remember them 30 years ago. As a result of today’s relatively easy travel, this sense of remoteness and the quality of the underwater environment is even more extraordinary. With only a few exceptions, I can visit any above or underwater site in the Belize atolls and the scene appears unaltered.” 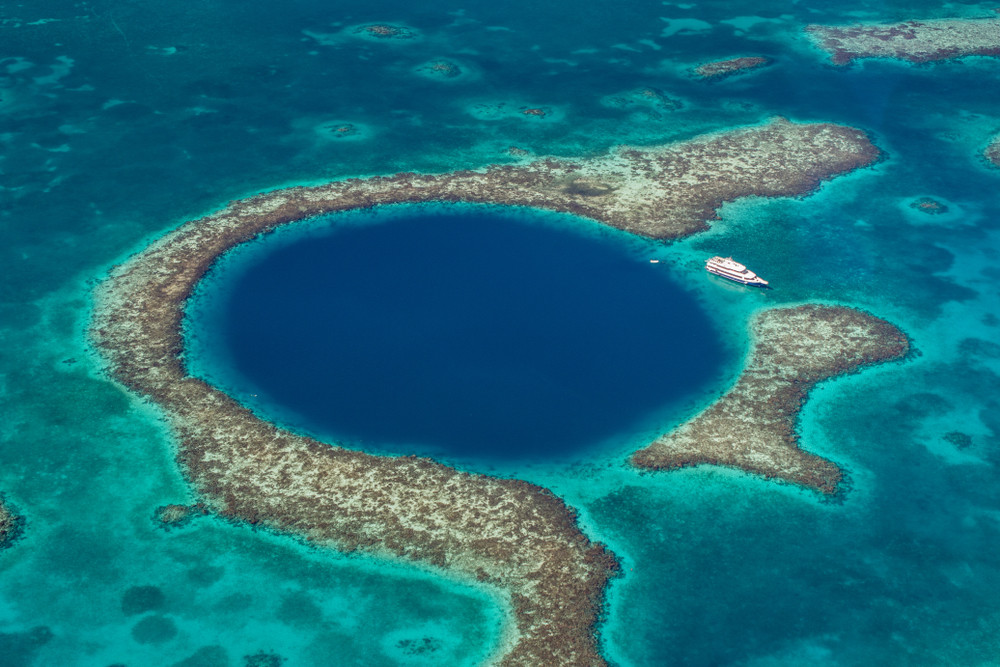 Some Fascinating Facts About The Belize Blue Hole

Size and Dimensions are important factors to consider.

There are no other sea holes as big as Belize's Blue Hole, which is the world's largest. Sea holes are caverns that became flooded as a result of increasing seawater covering them completely. Nearly all sea holes were submerged towards the conclusion of the last big Ice Age, approximately 10,000 years ago. The Belize Blue Hole is an exception to this rule.

A hundred kilometers (62 miles) offshore of Belize City sits the Belize Blue Hole, which is the world's largest sinkhole. Lighthouse Reef, a natural coral reef, surrounds the Blue Hole on all sides.

The fourth type of cave formation is stalagmite and stalagmite-like stalagmites.

When the Blue Hole was an aboveground labyrinth of tunnels, thousands of stalactites and stalagmites were produced, which divers can explore.

On a visit to the Blue Hole in 1971, Jacques Cousteau, the legendary French documentarian and marine biologist, was present. His subsequent description of the Blue Hole as one of his top ten favorite dive destinations in the world was even more glowing than his initial description.

The Identification of the Individual

In 1988, British diver Ned Middleton published a book entitled "Ten Years Underwater" about his diving career, which gave the hole its name. Middleton was the inspiration for the name "Great Blue Hole." No one is certain what they called the location when they discovered it, despite the fact that the Spanish charted it.

The Belize Blue Hole was named the #1 most stunning site on Earth by the Discovery Channel in 2012.

World Heritage Site No. 8 according to UNESCO

Divers with prior diving experience are only permitted to enter.

What Is Inside The Blue Hole?

Researchers believe that the Great Blue Hole is the largest of its kind in the world, and they have uncovered enormous stalactites, dripstone sheets, and columns within the blue hole. Due to the shallowness of the water levels in the areas surrounding the sinkhole, coral frequently breaks the surface of the water at low tide.

What Was Found At The Bottom Of The Blue Hole?

This was due to a dense coating of deadly hydrogen sulfide that covered the entire pit like a blanket and stretched the entire width of the sinkhole's entire diameter. Erika Bergman stated that "underneath that, there is no oxygen, no life, and we discovered conchs and conch shells, as well as hermit crabs, that had fallen into the hole and suffocated."

Bull sharks, Caribbean reef sharks, and the elusive hammerhead shark can all be found in the Blue Hole, as well as other species of fish. The Great Blue Hole Of Belize was voted number one on the Discovery Channel's list of the world's top ten most amazing places in 2012, according to the Discovery Channel.