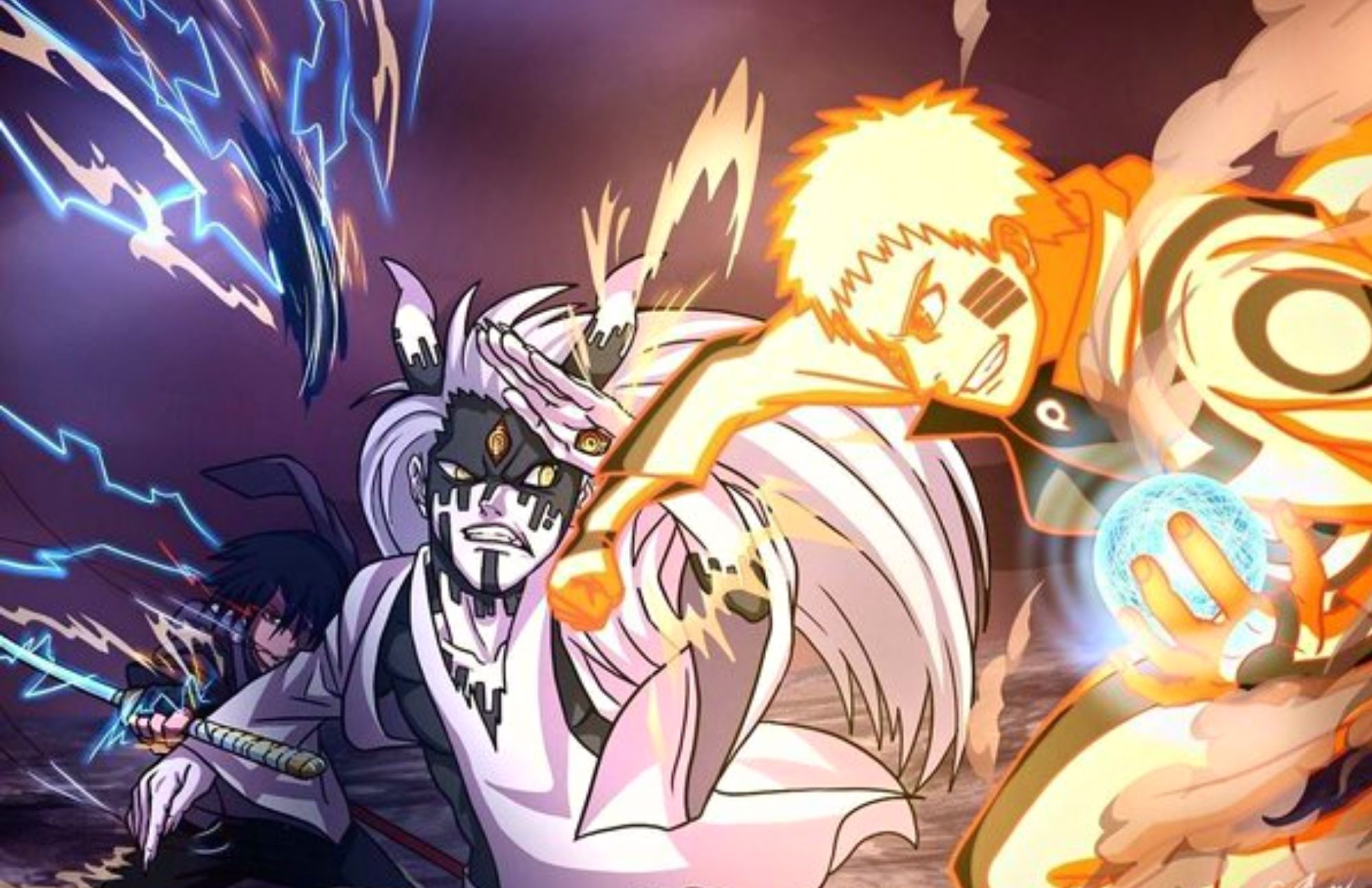 Millions of people throughout the world have been intrigued by Boruto: Naruto Next Generation, a popular Japanese television show, because of the valuable lessons and intense fights in the Boruto series it contains.

According to the typical remarks that you will find, people have mentioned that even when they watch it twenty or thirty times, they never get tired of it.

Boruto: Naruto Next Generations is a spin-off and sequel to Masashi Kishimoto's Naruto, based on the manga of the same name. Pierrot produces and airs the program on TV Tokyo.

In 1999, the series began as a manga series. It then became an anime and spawned many movies.

Shortly after Naruto ended, the spin-off show Boruto started. Even though the movie came out first, anime and manga are now soaring in popularity.

At this point, the author will present to you the most intense fights in the Boruto series! 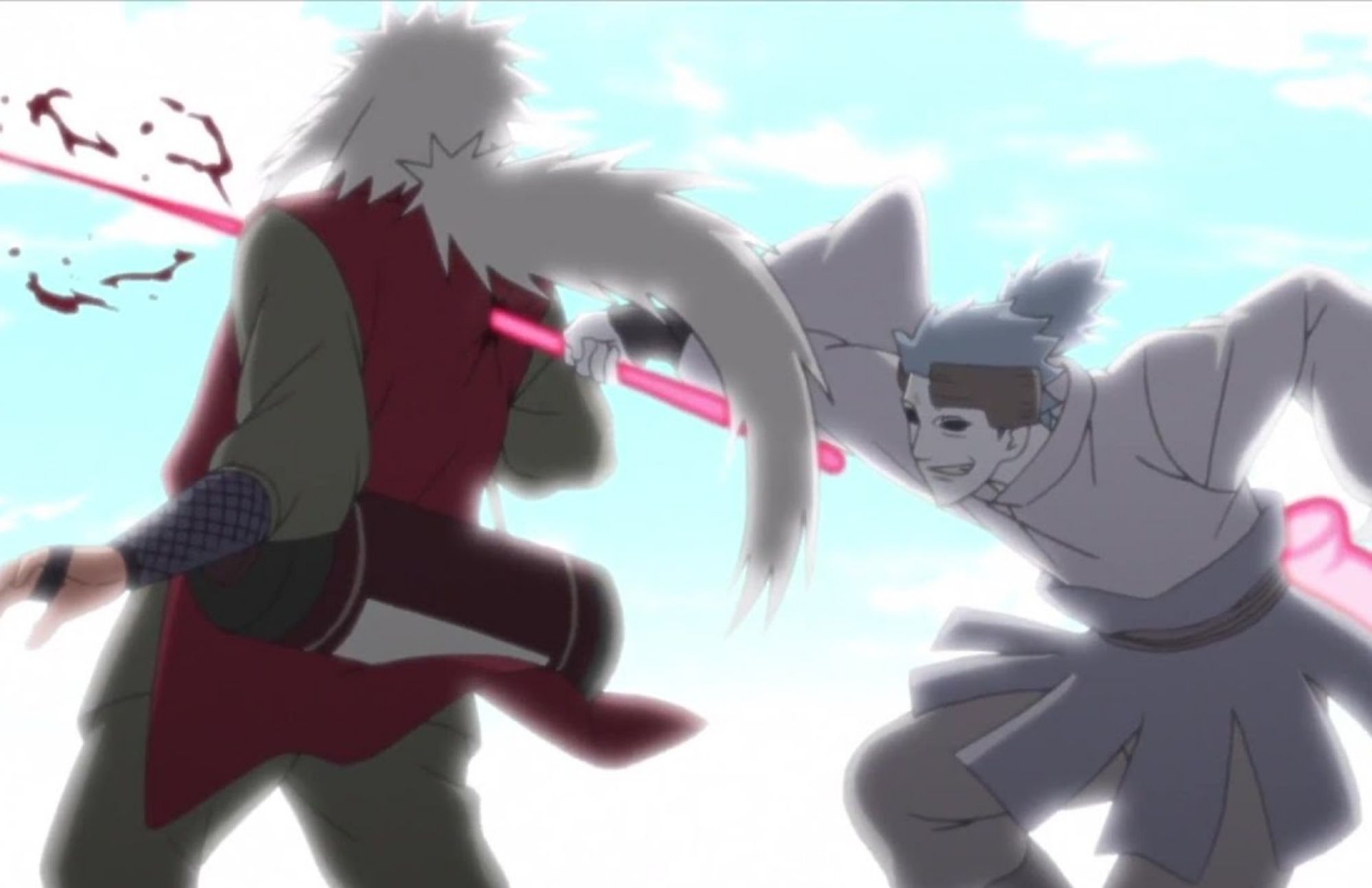 Urikashi, a pale white color kills Jiraiya using a pink long rod and some blood splash out in the air

The 135th episode of the anime Boruto: Naruto Next Generations is called "The Last Battle, Urashiki."

Boruto and Naruto are caught off guard during this battle, while Urashiki comes up from the ground. Jiraiya is wary of him because he thinks Urashiki is hiding something.

Urashiki Tsutsuki was a lowly member of the main line of the Tsutsuki clan who was brought to Earth to help Momoshiki and Kinshiki find Kaguya and collect chakra from the God Tree.

Urashiki eats his chakra gourd, but he thinks that's not enough, so he eats his own Rinnegan as well.

Then, he changes. His eyes change back to the golden Byakugan they were before, and he shows a new golden Rinnegan on his forehead.

Boruto and Naruto try to attack Urashiki, but he dodges their attacks and attacks back, throwing them both to the ground.

Boruto and Naruto's attempts to attack Urashiki fail. Jiraiya is the one who discovers them and then makes the decision to spearhead the attack.

Urashiki launches a fire release at Jiraiya, but Jiraiya just consumes it. This leads Jiraiya to believe that Urashiki is unable to do space-time ninjutsu at present.

He orders the kids to divert Urashiki's attention while he thinks of a strategy to halt the actions Urashiki is taking.

Jiraiya tries to entangle him in his hair, but Urashiki breaks free and tosses him aside.

The video below shows Boruto, Naruto, Sasuke, and Jiraiya fighting against Urashiki.

Jiraiya wouldn't be called a Legendary Sannin if he wasn't a skilled shinobi. Look how he quickly manage to find the weaknesses of Urashiki's hook absorbing-chakra and time controlling ability by simply using a seal technique against him and Toad Mouth Trap. Jiraiya's battle IQ, tactical and strategic skills is incredibly amazing. I agree, Urashiki is way powerful in terms of raw power but Jiraiya totally outsmarted him in the battle.

"Imagine being a person from a very powerful clan, but died to two little teenagers."

"So we just going to ignore that urashiki die and we dont know if was kid naruto of boruto who actually killed urashiki?

If a human kill otsusuki doesn't they get karma? And if kid naruto dint got karma that means urashiki is inside of momoshiki karma? My head spinnin now."

Naruto vs Delta,Feeling of being pitifully underpowered by Naruto being easily overwhelmed by Delta

Even for a shinobi with Naruto's level of experience, defeating Delta is not an easy task.

Delta's blonde hair is long and curly, and her eyes are a light purple color with yellow eye shadow and vertical lines that run through her pupils and iris.

Delta was formerly a member of the inner circle of the organization Kara.

The inner member of Kara is capable of absorbing almost any jutsu that is sent toward her.

He gathered chakra for a Rasengan, but she used her Scientific Ninja Tool eyes to take it in.

She then sank her leg into the ground, employing the power of hers to turn parts of her body into weapons, like Kawaki, to launch a bottom-up attack on Naruto. On the other hand, he was able to avoid it.

Adding that Delta is a core member of the Kara organization, Kawaki went on to declare that everyone in the group is a monster.

Delta, Boro, Code, Kashin Koji, Victor (who was assassinated by Koji), and Jigen, the group's commander, are all part of the Inner.

The eyes of Delta may reveal a hidden talent as well. She can shoot a counter-regenerative beam.

However, Naruto, however, reasoned that despite their efficacy, they likely required a great deal of chakra to maintain, and that she couldn't keep it up for long.

Kawaki stops Himawari's attack before Naruto can, which shows a lot about Naruto's character.

In the end, Naruto beats her by throwing Rasengans at her until she can't take any more of his chakra. He then kills her with a Super-Ultra-Big Ball Rasengan.

For the entire first half of the fight he was just playing with her, letting her think she was in control of the fight when he was leading the whole time. He let himself get hurt (which he knew he'd be able to heal instantly) in order to get more info.Then she made the mistake of attacking his kids. Not something you want to do to the strongest person on the planet.

"He's actually kinda OP in this fight. He basically let her beat him up at the beginning just to manipulate her into spilling more information, then beat her ass and defeated her without using arguably his most signature technique.

He was kinda playing around the entire first half until she hurt the kids lmao."

"I thought Naruto already surpassed Minato in speed but here it looks like he is yet to surpass Konohamaru."

Lastly, Parth Sharma observed something during the intense fight of Naruto towards delta where she said:

"Naruto was holding back because of the kids he also played weak so delta could tell some secrets in overconfidence , he also revealed later it would have been easier if he wanted to kill her."

Boruto And Shinki Vs Urashiki

During this scene, Boruto and Shinki are fighting a very strong enemy.

Shinki has green eyes, small eyebrows, and dark, spiky hair. Shinki has red markings on her face, just like Kankuro. These markings are similar to the ones on Gaara's Sand Gourd.

By combining his Earth Release and Wind Release, Shinki can unleash his Magnet Release ability. In addition, he can fortify his iron sand by producing an electromagnetic field using Lightning Release.

Urashiki should have been able to beat the two easily before Sasuke came.

Even so, it does show off some interesting jutsu, mostly from Shinki, who has such a unique skill that it's too bad he doesn't show up more often.

In the end, Boruto turns on his Jogan, which lets him see where Urashiki is going to attack from as he jumps between dimensions.

The fights that Team 7 had with Deepa are quite impressive and demonstrate actual growth from the three of them as a team.

Deepa was a bloodthirsty sociopath who could kill people without hesitation or any real reason to do so.

People didn't understand him because he was cruel and horrible. He loved to fight and would take on any challenge he could find.

Deepa could also make his projectiles smaller and more powerful. One of his attacks broke down a huge iron sand wall that Shinki had built.

Deepa could use both parts of his technique together as a last line of defense, wrapping himself in a massive armor that was almost impossible to break through.

At first, Deepa plays with them and is able to effortlessly control them; one of the Kara members even makes fun of Boruto at the very end.

The next fight is even more impressive because it shows a level of teamwork that wasn't even there in Team 7's first form.

It was ultimately their collaboration that led to their success, as all three of them worked together to ensure that the weakened Rasengan could prevail over Deepa. It's impressive in terms of the story, as well as the animation.

"Mitsuki is the only character that’s actually awesome in Boruto," a fan said in a comment.

"Don't you guys think Boruto fillers are actually good and better than most Naruto fillers?" still one of the best filler arcs in whole boruto."

Lastly, a boruto fan named AlexBoss said: "Love how boruto always Drop a rasengan real quick. Naruto never did it so much or so quick."

The last but not the least of the intense fights in the Boruto series is the "Momoshiki Otsutsuki versus Naruto & Sasuke" battle.

Momoshiki had the Byakugan in both eyes, which gave him telescopic vision, x-ray vision, and the ability to see the chakra pathway system and its tenketsu.

With it, he could see Naruto's chakra, which was sealed by Kurama's chakra.

Momoshiki was the only one who held two Rinnegan in the palms of his hands. At first, they were also red instead of light purple.

He could use his right one to absorb any chakra-based technique he came into contact with and then use it to use that technique.

Each segment of the epic battle between Sasuke and Momoshiki is as thrilling as the last. The battle that finally allowed Boruto to emerge from its predecessor's shadow

It would hold up against comparison to any combat in Naruto. Now that Naruto and Sasuke are no longer being held back, they can try crazy new things.

Kurama-infused Susanoo is, without a doubt, one of the most visually impressive techniques seen in any Naruto story.

Liz Milton, a fan of boruto posted a comment:

The fact that momoshiki got defeated by boruto makes me very shocked to know that there are people that think that he could beat Kaguya hagaromo or even Madara.

"I like the scene when Naruto adds chakra to boruto's rasengan. The fact that in Naruto shippuden even after training so hard when he first started using rasengan it leaves great damages on his body and it was quite difficult to handle massive rasengan but here it seems like children's play."

When he heard that Naruto remarked, "let's teach him a lesson, Sasuke," one user on YouTube got shivers.

All Fights In Boruto

Even though Boruto has established that he is a powerful and competent fighter, this does not mean that he is unbeatable, as seen by the fact that he has suffered early defeats.

There have been instances in the past in which Boruto has been unsuccessful.

Because he is overconfident in his skills, Boruto has a tendency to charge headfirst into situations without giving them any thought.

There have been bouts that Boruto should not have won, but he has, for some reason, managed to come out on top.

Naruto and Sasuke vs Isshiki | Boruto: Naruto Next Generations

Naruto and Sasuke go head to head against Isshiki in episode 216!

What Are The Big Fights In Boruto?

What Is The Best Fight Scene In Boruto?

The fight between Naruto, Sasuke, and Momoshiki is one of the ones that people talk about the most.

The fight between Naruto, Sasuke, and Isshiki forces Naruto to use the brand-new Baryon Mode. But not only the old-generation characters are in epic battles.

In Which Episode Naruto Dies In Boruto?

Despite Naruto's heroic efforts against Isshiki in Boruto Episode 218, the series suffers a major setback by killing off its most powerful hero.

Thank you for taking the time to read this article. The author hopes you enjoy watching the intense battles in the Boruto series.