The Untold Truth About The History Of Jade Burial Suits 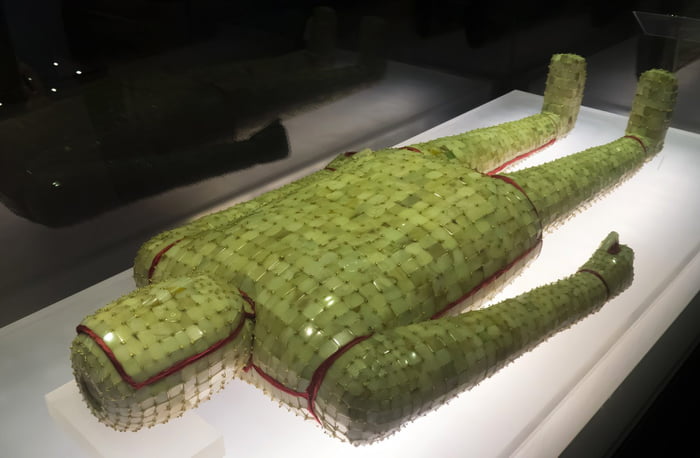 China's aristocracy and members of the ruling class were buried in ceremonial jade burial suits from the Han Dynasty, which were hand-crafted and used for ceremonial funerals in the country's past.

Early in the Neolithic period (6000 BC), the Chinese developed a passion for jade and used it to create ceremonial and decorative implements and weapons as emblems of political power and religious authority. 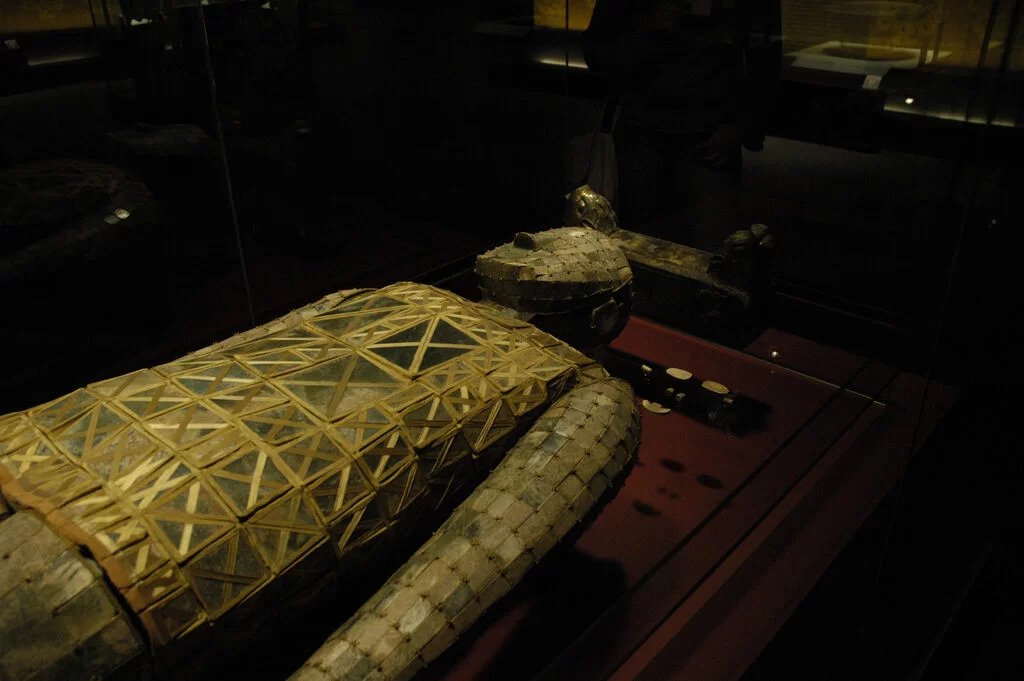 The Liangzhu civilization (3300–2300 BC) established one of the first known centers of jade manufacture in the Yangtze River Delta of China, acquiring nephrite jade for utilitarian and ceremonial jade artifacts from the now exhausted mines in the Ningshao region.

The Hongshan civilization (4700–2200 BC) relied primarily on jade from a region of Liaoning province in Inner Mongolia for the production of jade items in the shapes of pig dragons (zhlóng) and embryo dragons, which were carved out of the rock.

Starting with the rise of the Han Dynasty (the second imperial dynasty of China), jade goods became progressively adorned with animal and other ornamental patterns, while low relief work on things such as belt hooks became a feature of the aristocratic dress.

What Was The Purpose Of Jade Burial Suit?

The jade burial suits of ancient China were constructed as armor for the afterlife, with silver and gold threaded through hundreds of plates of precious stones. This was done to prevent mortal decomposition in the hereafter.

Jade Is Connected With Chinese Notions

Historically, jade has been linked to Chinese notions of the soul, protective characteristics, and immortality in the 'essence' of stone, owing to its hardness, durability, and delicate transparent colors (yu zhi, shi zhi jing ye).

Emperor Wu of Han (157 BC – 87 BC) was depicted as possessing a jade cup emblazoned with the words "Long Life to the Lord of Men," and as drinking an elixir of jade powder and delicious dew, according to a book written by the Chinese historian Sima Qian (145–86 BC) about the Emperor.

A two-part soul was believed to exist in each individual by the Han: a spirit-soul (hun ) that traveled to the afterlife paradise of immortals (xian), and a body-soul (po ) that stayed on earth and could only be reunited with the spirit-soul via a ceremonial reunification.

After a period of time, the early Han emperors began to think that jade could maintain both the physical body and the spirits linked to it after death, and a number of burial sites have been discovered with huge and little jade bi discs placed around the corpse.

According to tradition, people were buried in elaborate jade burial suits, which were made up of thousands of pieces of cut and polished jade sewed together with thread to completely encase the deceased and ensure that their bodies would stay eternal.

A single suit's jade plates are thought to have taken hundreds of artisans more than ten years to polish, underscoring the deceased's affluence and authority.

As recorded in the Hu Hànsh (Book of the Later Han), the type of thread used was determined by a person's social standing.

Under the Three Kingdoms era (AD 220-280), the tradition is thought to have been discontinued during the reign of the first emperor of the kingdom of Wei, who feared tomb thieves who would burn the costumes in order to recover the gold or silver thread.

Long suspected to be a myth, the mention of jade suit burials in historical texts was confirmed in 1968 with the discovery of two complete jade suits in the Prince Liu Sheng tomb and Princess Dou Wan in Mancheng, Hebei. Since then, a total of 20 known jade burial suits have been discovered in China, the majority of which are in the tombs of royalty.

For the ruling members of the Han Dynasty in China, wearing ceremonial garments composed of jade and gold thread was their favorite technique of achieving afterlife immortality. It wasn't until 1968 that these outfits were deemed to be mythical creatures. 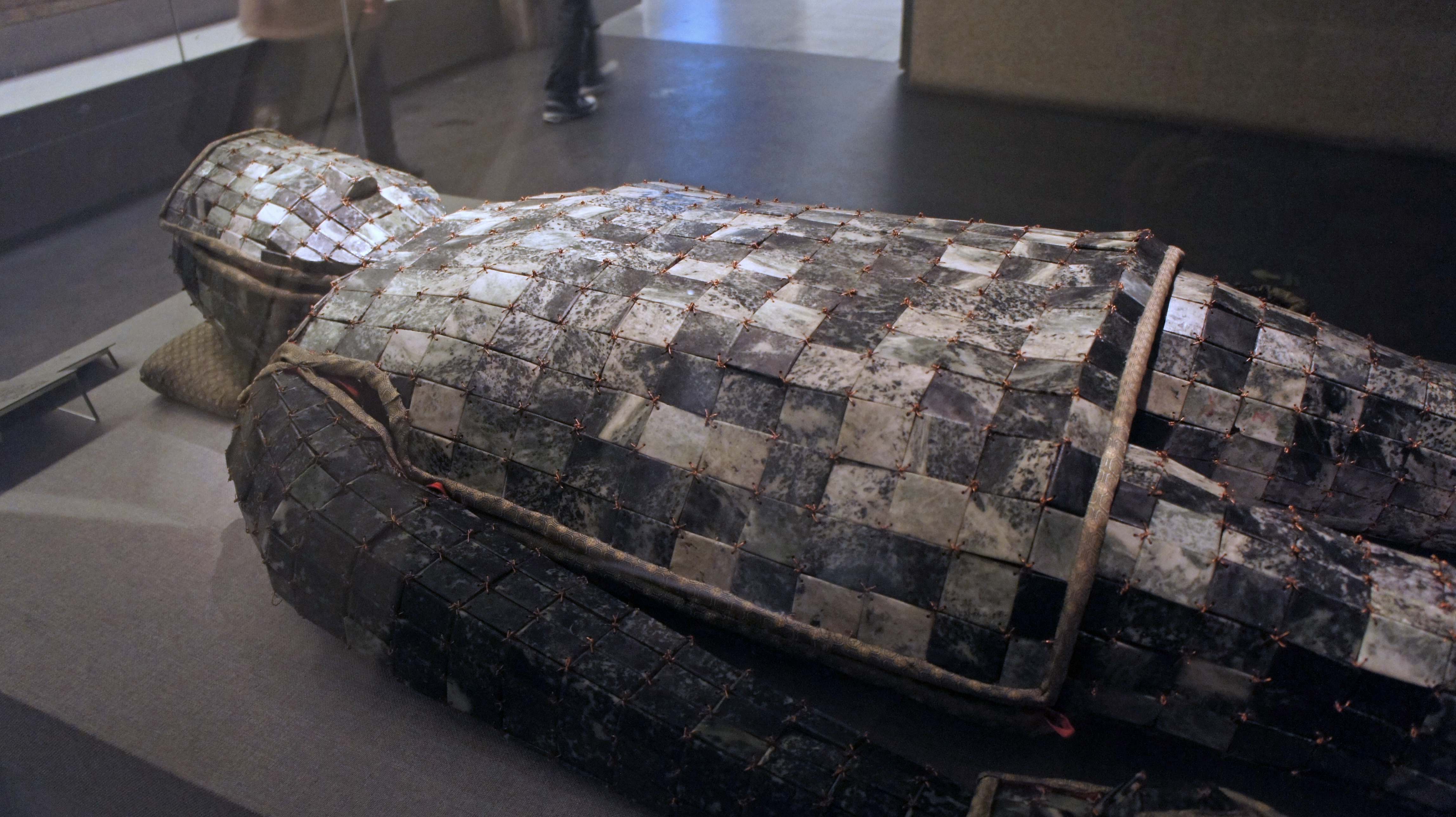 Why Were The Ancient Mummies Covered In Jade?

Gold was frequently used by the ancient Egyptians to coat their mummies, but only after they had removed the internal organs and wrapped the bodies in fabric. For centuries, the Chinese believed that merely covering a deceased person with Jade, a sort of stone, would be sufficient to keep them alive.

According to Chinese tradition, jade is considered to be a fortunate stone. It is referred to as "The Stone of Heaven" by these people. Because jadeite is so valuable, there is a phrase that reads, "gold is valuable, but jade is priceless." Jade is a stone that represents wealth, success, and good fortune. Also, it represents rejuvenation, longevity, and even immortality in certain cultures.

Jade is regarded as a sign of tranquility and purity. It represents wisdom collected in the midst of peace. It has a positive effect on love and nurturing. Jade is a protective stone that shields the wearer from danger while also bringing peace. Jade is said to bring good fortune and friendship.

Additionally, jade crystal has the potential to turn negative energy into good energies that encourage joy and love in your life and the environment around you. The stone is not only calming and harmonizing, but it may also aid in the healing of mental and physical traumas and diseases.

A lot of different views from different people about these jade burial suits.

"Sir the people are starving, the folks in accounting have raised some concerns about the cost and efficacy of a full jade suit for a dead person. HAVE THOSE TRAITORS EXILED!"

"You're not wrong as such, but to be fair the Han dynasty was a golden era of wealth and prosperity in China. There would have been budget for reckless bullshit like this"

"The only reason why the archaeologists found the jade is because at the time when the tomb robbers stole everything only the emperor could have Jade in his possession so the jade was literally worthless for a commoner. They just stole all the gold threading from the jade."

Both the Chinese and the Maya consider jade to be a holy stone. This stone is claimed to bless everything that comes into contact with it. It elicits feelings of knowledge, calm, harmony, and commitment to one's larger mission, among others. Now you will get the idea behind jade burial suits and also understand the entire wisdom(belief) about these suits.