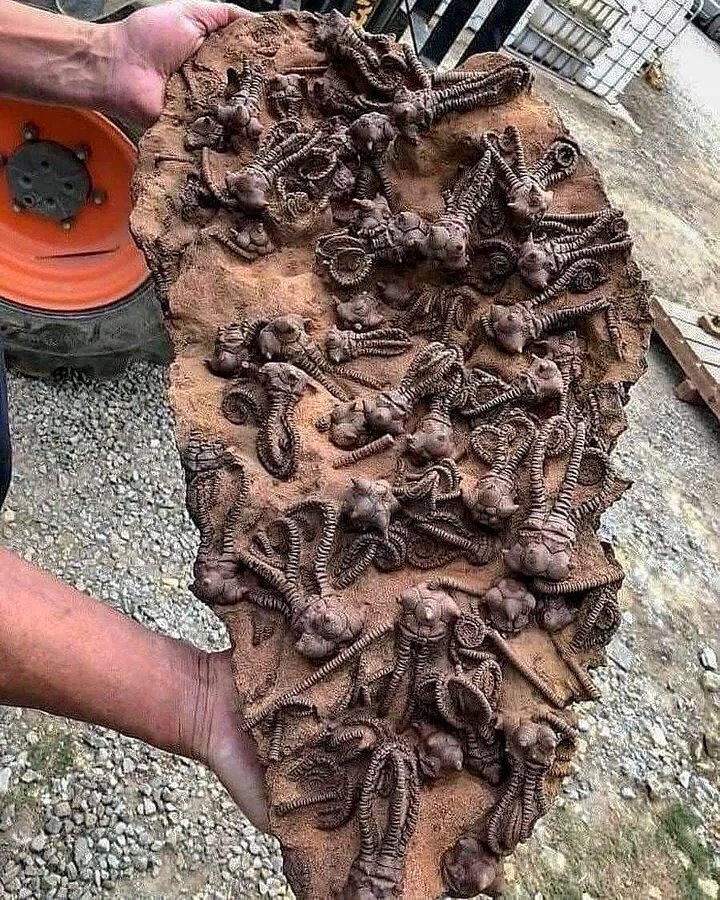 With over 18 individuals, this is a remarkable mass mortality plate of Jimbacrinus crinoid fossils from Western Australia, which is extremely unusual.

These crinoids are three-dimensional and have an extremely strange look.

The plate measures 12.6 x 10 inches and has been meticulously prepared. 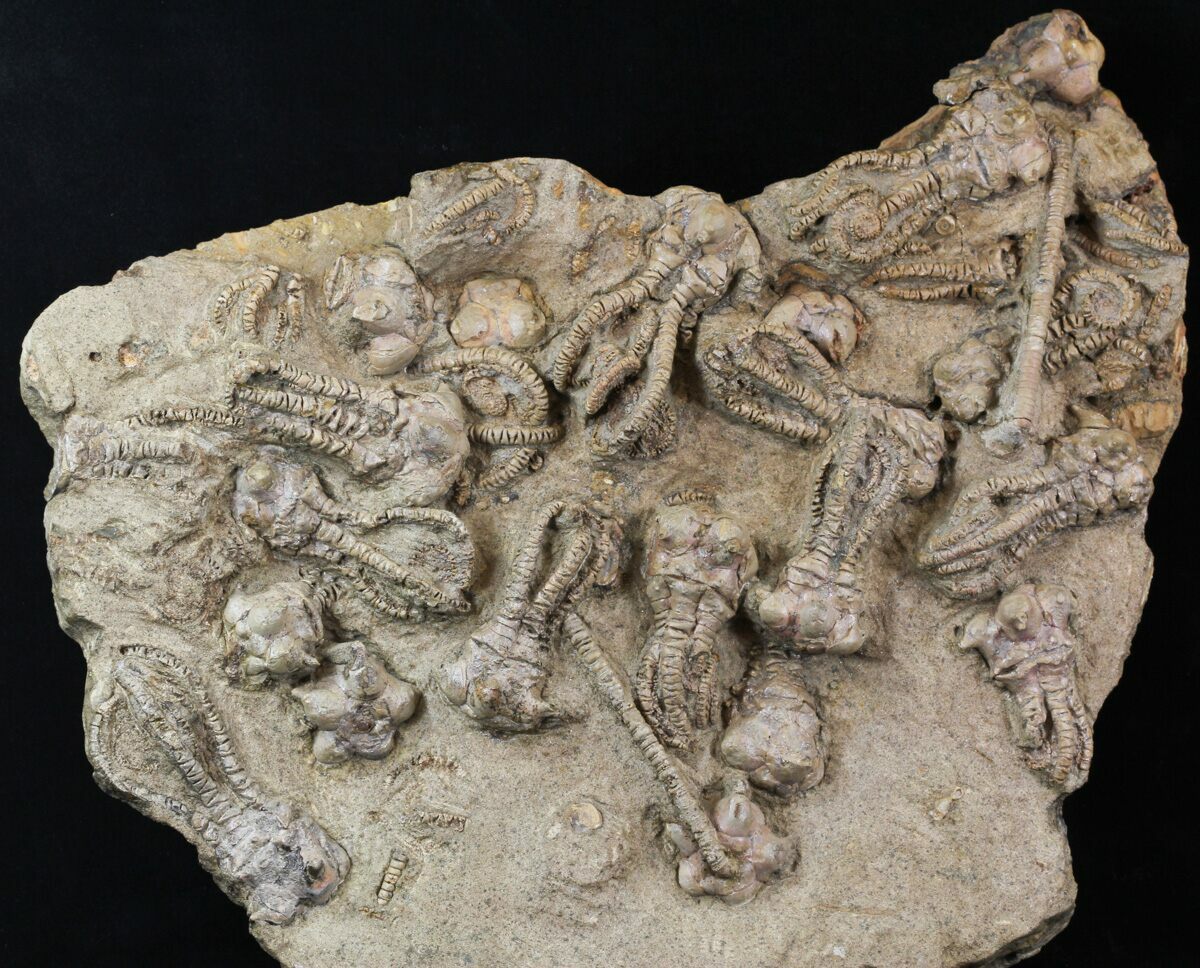 Crinoids, which are sometimes referred to as sea lilies, are animals, not plants, and are found in the ocean.

They are echinoderms, which means they are related to starfish, sea urchins, and brittle stars, among other things.

Many crinoid characteristics are shared by other members of its phylum; for example, tube feet, radial symmetry, a water circulatory system, and appendages in multiples of five are all shared by crinoids (pentameral).

It was during the Ordovician period (488 million years ago) that they first appeared, and some species are still alive today.

As a result of Australia's rigorous fossil export regulations, these Jimbacrinus crinoids are difficult to come by.

This specimen was lawfully exported during the 1980s and had been in a collection for many years until it was recently re-prepared for display.

Crinoids are essentially upside-down starfish with stems, which is a fairly simple description. Crinoid stems stretch downward from what would normally be the top of a starfish, leaving the mouth of the creature open skyward and its arms splayed out in front of the organism's mouth opening. The crinoid arms, on the other hand, appear articulated and feathery.

Some people even took these fossils as a movie scene and say:

"Rewatched the matrix only a couple days ago, and yep! these look like them!"

This Jimbacrinus bostocki fossil from Western Australia is extremely 3D and realistic in appearance. This crinoid, which has an extraterrestrial appearance, is in excellent shape, is 4.2" in length, and is shown in an aesthetically pleasing carved block of stand stone. It dates back to roughly 280 million years ago, during the Early Permian period.

As a result of Australia's stringent fossil export regulations, these Jimbacrinus crinoid fossils are extremely difficult to come by, and this specimen is one of just a few that have been lawfully shipped with the required permissions. 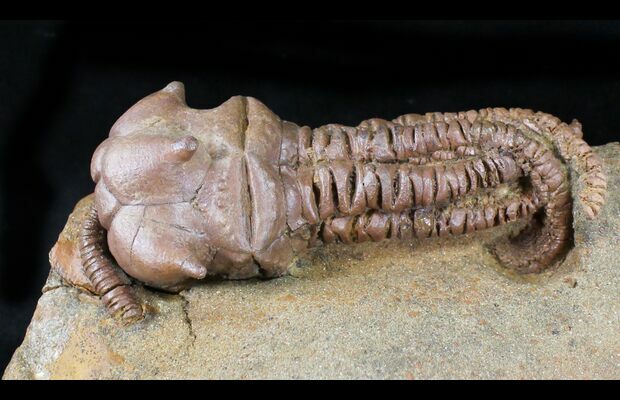 A closed view of a Jimbacrinus Crinoid Fossil found in Australia

Although it is located far from the open ocean, the Cundlego Formation is over 275 million years old and came into being as a result of flooding in an internal rift basin.

It is thought that Pangea was formed by joining together the two supercontinents Laurasia in the north and Gondwana in the south to form a single, massive continent known as Pangea.

It had a rather rich marine species that prospered in the chilly but warming seas.

Periodic storm occurrences buried the more immobile, bottom-dwelling species under a thick layer of sand and silt, preventing them from moving.

Rock surfaces exposed by storms in the Cundlego Formation at Gascoyne Junction were strewn with assemblages of sea stars, brittle stars, and filter-feeding crinoids (sea lilies), all of which died.

A big slab of the Cundlego Formation, which was presented to the Western Australian Museum, contains several articulated crinoids as well as an unidentified species of sea star, among other things.

Are Crinoid Fossils Worth Money?

They have the potential to be quite stunning. Crinoid fossil stem pieces are extremely frequent and cheap and may be found in abundance. It is possible to find a huge, well-defined piece for less than $5. Smaller fragments may be available for $1 or less.

Cundlego Crinoids In The Fossils Market

The Cundlego crinoids are highly sought-after and valuable fossils on the commercial fossil market, and they are found in large quantities.

Common species that are well-represented in museum collections, such as Jimbacrinus Bostocki, are lawfully transported to fossil collectors all around the world, including the United States and Canada.

On the other hand, illegal export and import of protected fossils is a significant problem in the science of paleontology, since people and businesses participating in commercial fossil traffic have the potential to deplete sites of scientifically valuable specimens altogether.

In the future, museums may be approached by private persons who wish to sell them high-quality specimens. However, due to financing constraints, public institutions are rarely able to compete effectively with private individuals.

What Is The Oldest Fossil Found In Australia?

Scientists discovered what they believed to be 3.5 billion-year-old fossils in Western Australia over 40 years ago, and the rest is history. According to recent research, these rocks did, in fact, contain organic life, making them the world's earliest fossils ever discovered. The discovery reveals that microbial creatures existed on Earth 3.5 billion years ago, confirming previous research.

What Is The Rarest Fossil Ever Found?

One of the tiniest bird fossils ever unearthed has been shown by scientists. The chick lived 127 million years ago and belonged to a group of prehistoric birds that coexisted on the globe with the dinosaurs throughout their time on the island.

Are you fond of history, aliens, or just some unique antique items? These Jimbacrinus Crinoid Fossils are a great way to satisfy your conscience. They are also available to buy.