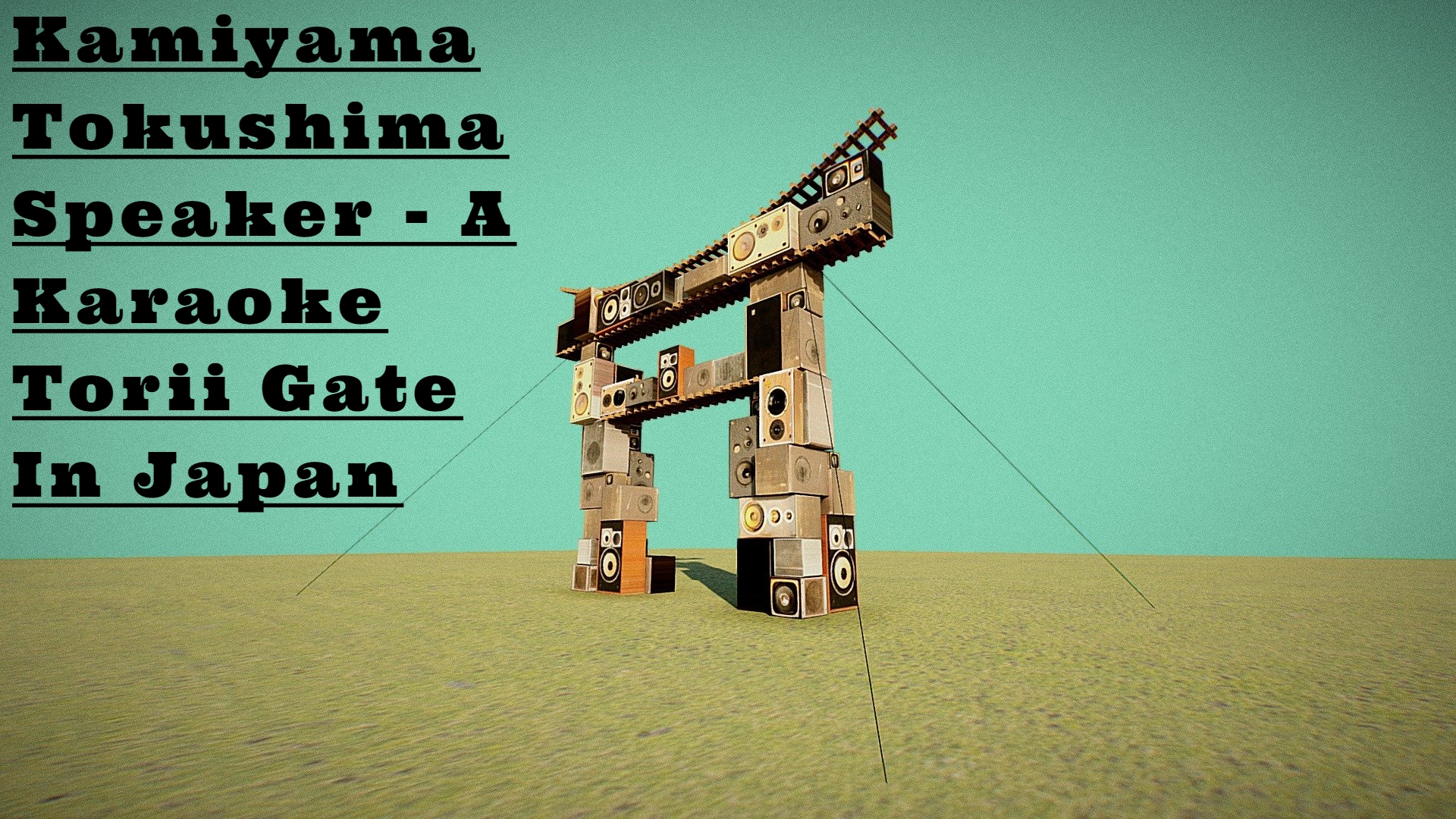 A Kamiyama Tokushima speaker is a torii gate constructed entirely of speakers and is found at Kamiyama, Tokushima.

Just plug in your phone and play whatever music or audio you like. If you were to play music, what do you suppose you'd play?

Kamiyama Tokushima speaker is a part of another sculpture by Benoit known as the Shrine by Benoit. The shrine was for an exhibition. It was then disassembled and taken back to Kamiyama. 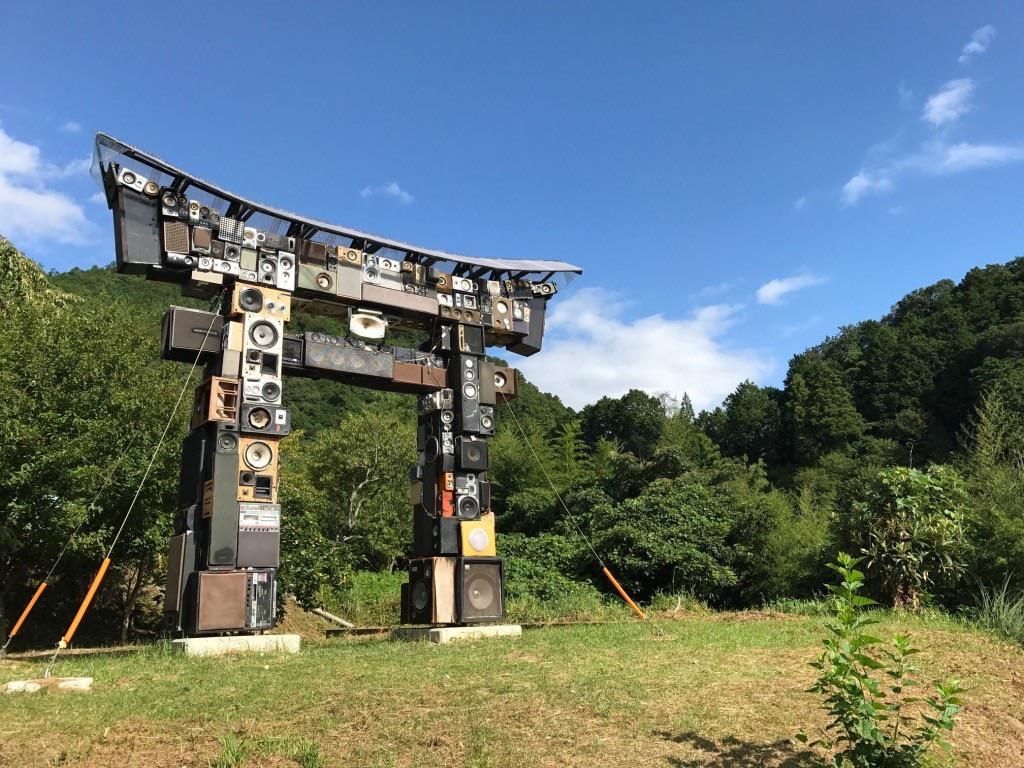 Karaoke Torii gate in the forest

A public sound sculpture that people can interact with and use to play their own voices and music through.

On a 4-meter-tall Torii Gate structure, 200 repurposed speakers are wired together.

The 8-channel speaker system enables simultaneous connections from up to four people, all of whom can then use the microphone input or Bluetooth from their mobile devices to share their thoughts and ideas.

Also, the artwork acts as an amplifier for "recycled" electromagnetic waves (white noise), making the low-volume noises audible around the clock as a constantly changing "background" sound (its "pulse").

The Shrine can also be used as a high-quality sound system for outdoor events, concerts, and formal gatherings. 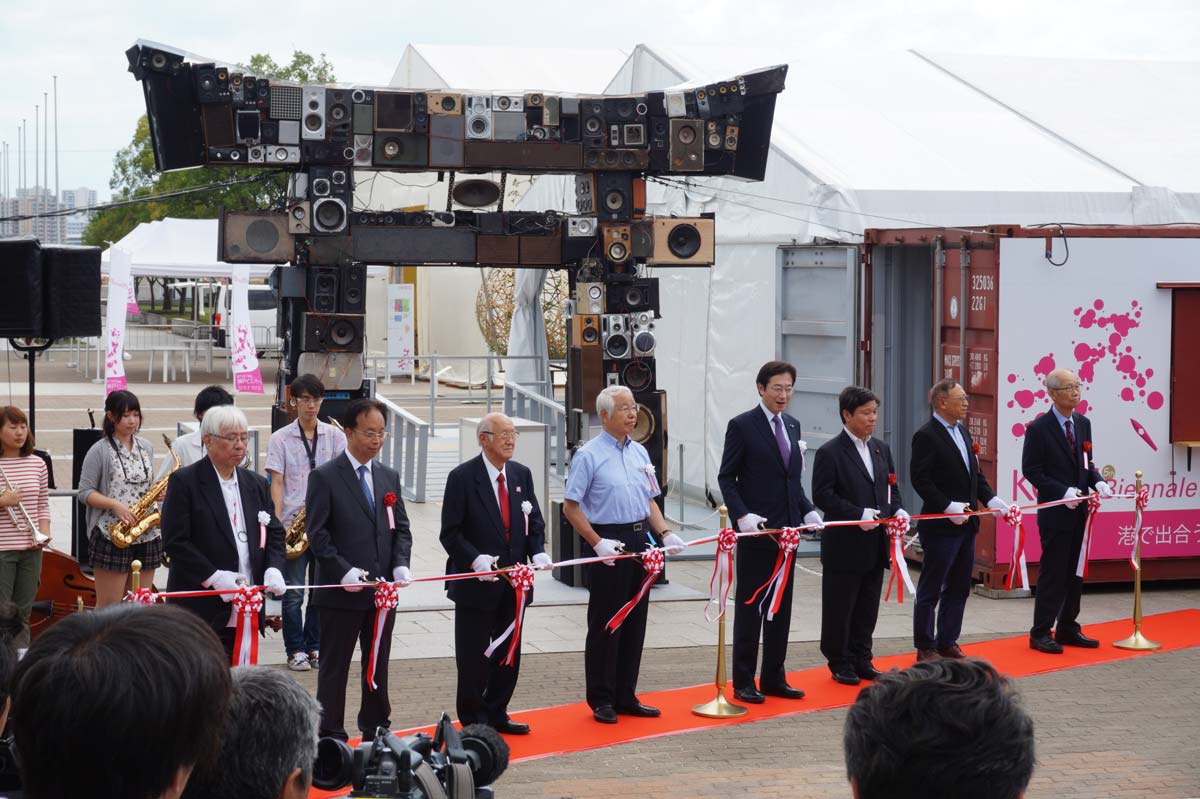 Opening ceremony of Shrine by Benoit Maubrey in the exhibition

Now, learn about Torii gates in Japan and their importance.

Usually located at the entrance to or within a Shinto shrine, a torii (Japanese: [to. i. I]) is a traditional Japanese gate that symbolizes the transition from the secular to the sacred.

Japanese Shinto shrines are entered by a symbolic gate called a torii.

The torii, which come in numerous forms, are usually made up of two vertical cylindrical posts, a rectangular beam that spans the gap between the posts, and a second beam that runs parallel to the first but a short distance below it.

Some experts believe that as Buddhism expanded from India to Japan, the torii got its inspiration from the torana, an Indian gateway arch.

Some people draw parallels between torii and ancient Chinese gates from Manchuria and elsewhere in China.

The torii, which is traditionally painted bright red, marks the transition from the holy grounds of the shrine to the secular world outside.

In addition to marking sacred mountains and rocks, torii also mark other locations.

Meaning And Function Of Torii Gate

Torii gates serve primarily as a boundary between the secular world and the holy grounds of a shrine.

Therefore, they demarcate the holy area from the everyday human habitation area. After passing through the torii gate, you have reached the holy area.

Even if you don't happen upon any ancient shrines, you may still see stunning torii gates in Japan.

Those beautiful sites near the coast or at the foot of a well-known mountain are included.

The sacred mountains and the ocean, as well as these torii gates, are all seen as manifestations of the divine.

Animism describes this worldview, which has deep roots in traditional Japanese culture.

The Meaning Of The Different Colors Of Torii Gates

The Shinbutsu-Shugo, commonly translated as the fusion of Shinto and Buddhism, is the distinctive religious system from which the tradition of erecting red torii gates emerged.

It can be thought of as a combination of Shinto and Buddhism, both of which once held considerable sway in Japan.

For Buddhists, crimson is a symbol of both the sanctified environment and the life force.

Also, the color red is used a lot at the harvest god's shrine, Inari Shrine, because it is thought to keep away evil spirits.

To add some levity, torii gates come in a wide variety of hues, not just the traditional red and white.

In Japan, you can find a variety of colors and styles of torii gates. The orientation of shrines determines the hues used.

This torii gate was painted pink to make it look better, and now it is known as a beautiful spot with a pink torii gate surrounded by pink flower carpets.

May is the perfect month to pay a visit. The months of May and June are peak blooming months for Shibazakura.

Now, back to the main topic. 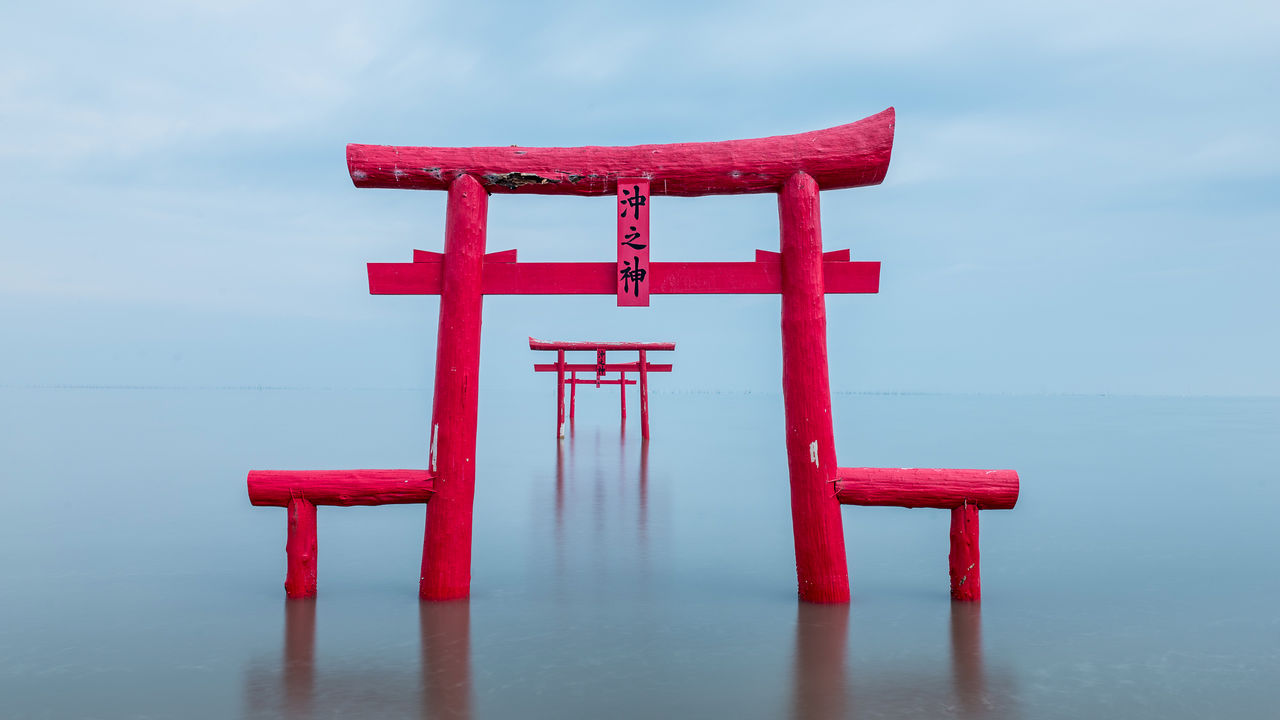 Red-colored Torii gates in the sea

An American artist, Benoit Maubrey, erected a Torii Gate or Shrine as mentioned above measuring 4 meters in height and 4.8 meters in width out of 300 medium-to-large speakers in the exhibition.

Sculptor Benoît Maubrey built a modern take on a traditional Japanese torii gate using speakers and a variety of inputs for the 2016 Kobe Biennale exhibition in Kobe, Japan (Bluetooth, line-in, even an 8-track).

The design of the torii is pretty typical of myoujin, but this one is different because it has a lot of speakers on it.

A Bluetooth transmitter is linked to the speakers via wires, allowing for the transmission of audio to the loudspeakers via Bluetooth.

This Bluetooth speaker not only produces a powerful sound but also allows you to stream music from your phone.

This Karaoke Torii was first seen at the Kobe Biennale festival in 2015, and it was taken down after the festival was over.

When a member of the festival committee found out what was going on, they were able to get him moved to Kamiyama, which is in the Tokushima Prefecture.

Benoit Maubrey, the artist, and Gerrit, his technician, spent a lot of time and effort bringing it back to life.

Eventually, the building found a new home in Kamiyama. Maubrey has created other pieces along these lines, and here is what he has to say about them:

Like a sculptor could use clay or wood, I employ loudspeakers as an artistic medium to create large-scale works of art that stand out by making the surrounding air move (via sound).

Similarly site-specific and adaptable is the audio component of my sculptures; the volume of the sound and the degree to which it interacts with the viewer are both adjustable via a mixing board (a bell tower or pendulum clock also make sound).

To encourage audience participation, I install microphones, Bluetooth receivers, telephone answering machines, radio receivers (for low-level cosmic white noise that sounds like whispering pines), and "audio" Twitter that allows individuals to send phonic messages into the sculpture, depending on its location and intended use.

As a complete, the system may function as a public address system, ideal for making announcements, holding concerts, hosting open mic nights, and hosting DJ events.

Passengers could link to the torii with microphones or mobile phones to play music or sounds, have conversations, or engage in karaoke.

If you're in the mood to sing karaoke, there's a microphone jack and an 8-track cassette slot, too. The condition of the speakers is not suitable for audiophile use.

They look and sound well worn-in.

According to Benoit, perfect acoustics were never the goal. In a similar vein to Benoit himself, the broken loudspeakers evoke a bygone era of excess.

Perhaps the building is a shrine to opulence long past. A passageway leading from the secular to the religious.

How Is Karaoke Torii A Recycled Product?

The Karaoke Torii is a double-sided example of recycling in action. To begin with, it is constructed from three hundred repurposed speakers that anyone with a mobile device can link via Bluetooth. Second, it was previously a part of another sculpture by Maubrey. This sacred structure was designed for the Kobe Biennale.

What Are The Features Of Karaoke Torii?

The public is welcome to use the sculpture's microphone input and listen to the soothing low-level white noise. These are the features of this sculpture.

Benoit Maubrey was born in the state of Washington, although he has since moved to France to study sculpture and performance art. He graduated from Georgetown and then settled in Berlin, Germany. Many international exhibitions and awards were bestowed upon him. He recently settled in the town of Beitz, Brandenburg.

People from all across the country have started flocking to the Karaoke Torii or Kamiyama Tokushima Speaker, which comes as no surprise to everyone. It is to inform you that in 2019 a storm destroyed Karaoke Torii.