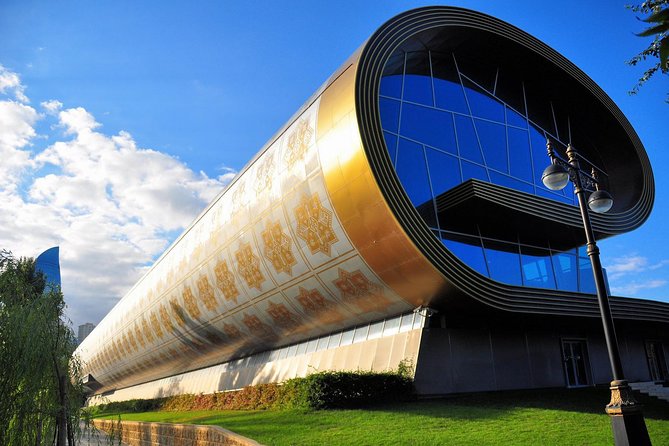 The National Carpet Museum in Baku Azerbaijan, the first museum in the world of its sort was formed in 1967 and located in several locations for 54 years. In 2014, the Carpet Museum moved to a new purpose-designed facility in order to present to the world, fully and at the correct level, the greatest collection of decorative-applied art and, above all, the most complete and priceless collection of Azerbaijani carpets and carpet goods.

Which National Capital Has A Museum Shaped Like A Rolled Carpet?

The Carpet Museum, which is located on the Seaside Boulevard and is designed like a rolled-up rug, is another of Baku's modern architectural wonders. In addition, it is home to the world's greatest collection of Azerbaijani carpets (numbering in thousands) on the inside. 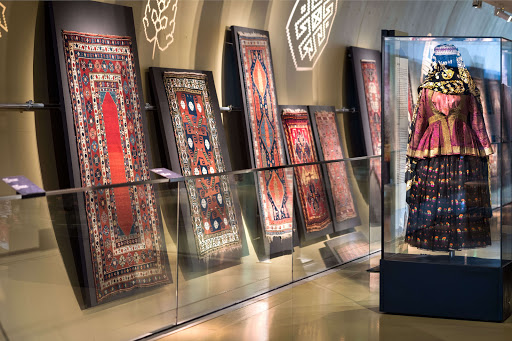 The museum’s new structure was planned by the Austrian architect Franz Janz and built on the site of Seaside Park. The building’s avant-garde composition in the style of an unfolding carpet is constructed of metal and glass – a rather bold decision for a museum that showcases traditional art. The building is itself an art object and attracts attention with its architectural design. At first inspection, there is no mistake that it ties to the carpet motif.

The construction’s dynamic shape, generating the illusion of a coil, creates a sense of monumentality yet at the same time a feeling of lightness as if floating in the air. One portion mimics the carpet fringe and provides a dynamic three-step line on one side. From this angle, the “flying carpet” appears to span the entire boulevard.

As they move deeper into this magical realm, the play of light and shadow creates associations, unexpected discoveries, and helps them distinguish the nuances of patterns. That's when the magical world of amazing animals, paradisiacal birds, and arcane symbols emerges from the carpet and ascends through the walls and ceiling.

This book transports you to a different realm and unravels the mysteries of an art form that has consumed people's spiritual worlds for generations. The exhibition tells a tale of the development of carpet weaving, starting with the simplest technology.

The exposition, which runs the length of the building, allows visitors to clearly perceive the evolution of this art, from compositional competence to ornamental patterns and color range complexity.

"The obsession with carpets from this part of the world (Armenia too or in particular even) is astounding."

The first floor of the permanent exhibition shows the growth of flat-woven carpet weaving and the role of carpet and carpet items in Azerbaijani daily life and traditions. Among the materials uncovered during archaeological digs in Azerbaijan are needles, spinning tools, ceramics with remnants of ornamentation that were also commonly used on carpets, and gravestones with images of looms and weaving instruments.

They also disclose the natural dyes that give carpets their unique beauty by saturating them with vibrant and dramatic color combinations. The data is multi-level. Separate displays describe the usage of carpets and carpet materials in the life of semi-nomadic cattle-breeding communities, and the importance of carpets in wedding traditions. 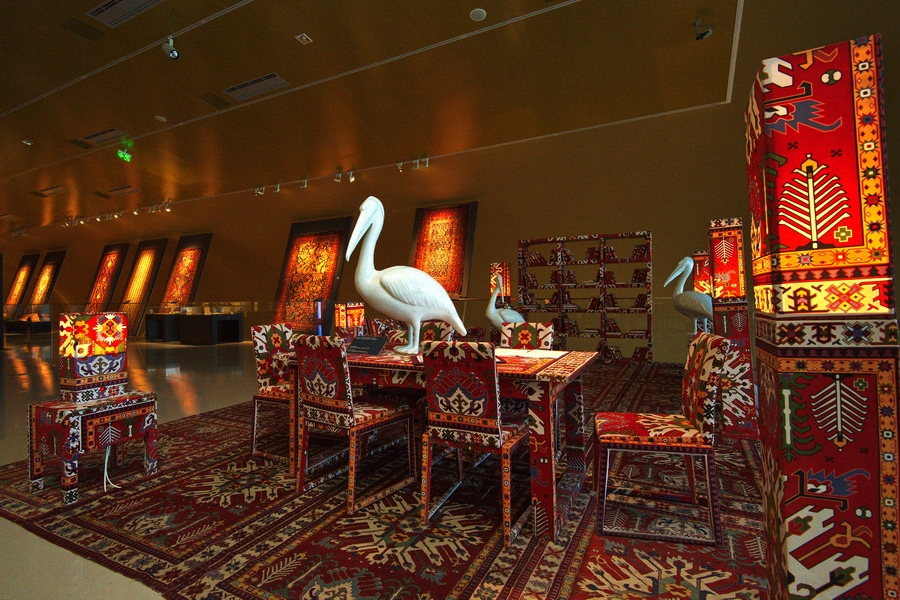 Exhibits pile carpets from the 17th through early 20th century. Along with the carpets, it has national costumes, embroidered items, and an impressive metal collection. A typical Shusha chamber from millennia back has been recreated. The National Carpet Museum in Baku Azerbaijan has replicated the pleasant ambiance of a wealthy home where carpets are prominently displayed.

Shusha's houses were huge, with Dast Khali Gaba rugs covering the entire interior. The walls were painted with paintings representing the Garden of Paradise, and the windows were fashioned of wooden frames with a binding in the geometric ornament girih, into which colored glass was fitted. The abundance of embroidered curtains for niches, bookcases, fireplaces, and other small surfaces gave the impression of being in the Garden of Eden.

The furnishings created a unique environment that reflected the concept of ideal beauty, capable of drawing the soul closer to God, the Absolute. This level also has the collection's oldest carpet, a 17th-century Ajdahali (Dragon) carpet from Karabakh. Grover Schiltz, a member of the Chicago Oriental Rug and Textile Society (USA), left the carpet to the museum in 2013.

Since 2016, the ANCM has been actively seeking new samples for its collection, contacting both collectors and auction houses. In 2017, the museum acquired a miraculously preserved late-17th-century palace carpet Shamakhi of Shirvan from the Austria Auction Company. Generally, fragments of these carpets have remained until their time. They are rare and usually found in huge museum collections.

So, a complete carpet is a rare find. In 2018, they discovered a Khatai (Dragon) carpet in a private collection. Its intricate design, reminiscent of Safavid palace carpets, features stylized vegetal and zoomorphic embellishments typical of the Karabakh group.

These interlocking notched branches create a typical Bandi-Rumi design, linked by representations of palmettes, a symbol of eternal life, accompanied by dragons as guardians. The tree of life replaces the dragon on this carpet. A late 17th–early 18th century Karabakh carpet is also in the museum's collection. In addition to the Chelebi medallion, this flowery carpet is valuable for its composition and genesis.

A late 17th–early 18th century Nakhchivan carpet from the Karabakh group is also on show. Their weaving has been regarded as the greatest in Azerbaijan since ancient times. Centrally placed Chelebi medallions and palmette pieces embellish the carpet. The carpet's huge size, intricate weaving, and color harmony indicate it was made to order at the workshops.

These carpets were utilized in 14th-16th century castles and homes. The third floor of the permanent display introduces the growth of carpet weaving in the twentieth and twenty-first centuries. Most of the exhibitions on this floor are dedicated to professional carpet artists who elevated this art form in the 20th and early 21st centuries. Among them is Latif Karimov, exceptional carpet artist, pioneer of carpet science, founder of the Carpet Museum, People's Artist, and State Prize Laureate. His research, sketches, and compositions are well portrayed.

They also celebrate the life and work of People's Artist Kamil Aliyev, who greatly influenced carpet art's progress. The museum exhibits modern carpets by artists who worked in the twentieth century and still do now. The museum incorporates a lot of multimedia. Using stands, touch screens, and monitors, visitors may learn more about the museum's collection and specific exhibitions.

The National Carpet Museum Azerbaijan now reigns supreme. The ANCM, like all major museums worldwide, actively creates educational programs, tours, lectures, and masterclasses centered on its permanent collection. These encounters with tourists focus on the technological and creative richness of their most important national heritage: the Azerbaijani carpet.

The museum is now a dynamic educational resource for all visitors, including those with impairments. Visitors with wheelchairs frequently use our facilities, navigating them independently. Each exhibit, explication, and description is structured such that visitors may read and operate touchscreens while seated.

Because of the ANCM's uniqueness, both vision and touch provide a complete impression of carpet art. The museum has a section dedicated to preserving historic technology, which weaves miniature carpet samples. These samples go with the complete show.

This type of interactive, tactile display engages visitors of all ages and helps them learn about the ANCM collection. This innovation at the National Carpet Museum in Baku Azerbaijan allows blind or visually impaired people to “see” the carpets, try out different approaches, and feel the ornaments' contours. Each exhibit has full information in Braille and audio recordings.