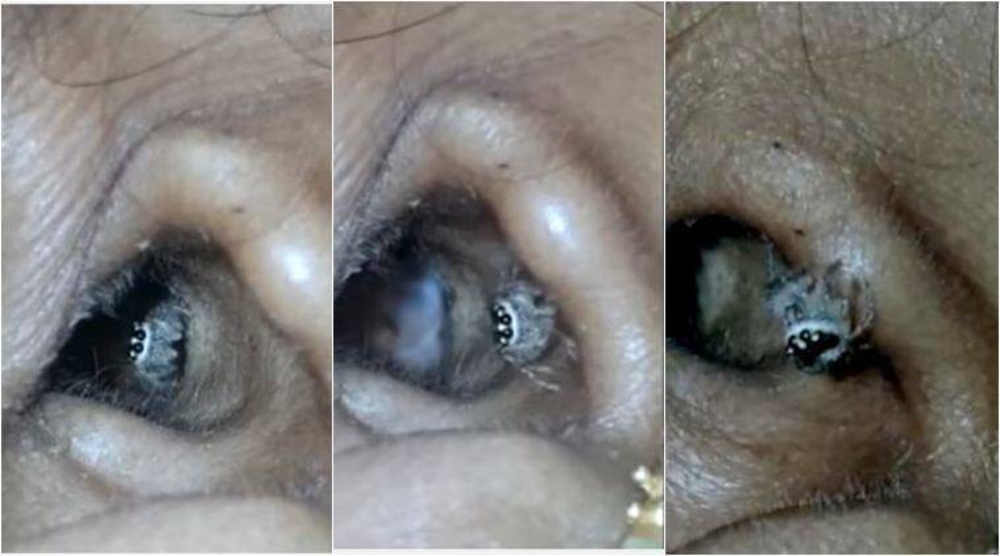 Are you terrified of spiders? You should probably turn away, or you'll have nightmares forever. People are horrified over a video showing spider crawled up inside a woman’s ear.

A spider was found living in the ear canal of a woman in India. A picture of the spider was taken and put online. Whether you are arachnophobic or not, you may want to prepare for this.

People are horrified over a video showing spider crawled up inside a woman’s ear and the eight-legged freak can be seen nesting inside her ear canal in the video. It raises so many questions.

In any case, the video has reappeared online after horrifying people around the world in 2018. This was not on our 2022 bingo card, as it is causing viewers to feel extremely queasy once again.

SPIDER CRAWLS OUT OF WOMAN'S EAR

One user wrote, "I would find a living creature crawling around in my ear unbearable, especially if I knew it was a spider."

Someone else remarked, "It crawled to the edge, why wouldn't you just flick it out?" A third commented, "No way am I letting this spider live in my head rent free."

The spider was discovered on Lakshmi, a 49-year-old housewife. She made the stomach-churning discovery in Bangalore, India, after experiencing an earache. Lakshmi's husband rushed her to the hospital, where doctors got rid of the disgusting spider.

I was terrified as I could feel movement of a creature in my ear. The acute earache followed by sharp pains suffocated me. I couldn’t think of anything and was petrified when the doctor confirmed the presence of a spider in my ear.

It is common to see emergency room visits due to the presence a foreign object in the ear, and it takes a simple procedure to remove the object. However, when a living insect makes its way inside a human ear, the patient might get frightened making it difficult for the doctor to continue the procedure. It was a rare case to see a spider moving inside the ear canal.

Can A Spider Go Into Your Ear?

Yes, during sleep, a small spider or another insect could crawl into your ear canal. However, this likelihood is extremely remote.

How Do You Know If A Spider Crawled In Your Ear?

Pain and discomfort are the most common signs of an earworm infection. Multiple cranial nerves transmit information to the brain from the external ear and the eardrum's outer surface. A bug or other foreign object can irritate these nerves.

How Do You Get A Spider Out Of Your Ear?

If the object is an insect, tilt the head so the ear containing the insect is facing upwards. Pour rubbing alcohol or warm, but not hot, oil into the ear canal. Mineral oil, olive oil, or baby oil may be used. The insect must float away.

How Long Can A Bug Live In Your Ear?

A bug can live in your ear for a few days.

On social media, a video of a small spider crawling out of a woman's ear has gone viral. people are horrified over a video showing spider crawled up inside a woman’s ear. The video shared showed a woman's ear canal being illuminated and an eight-eyed creature slowly crawling toward the light. Internet users were both horrified and awed by the insect's abilities.