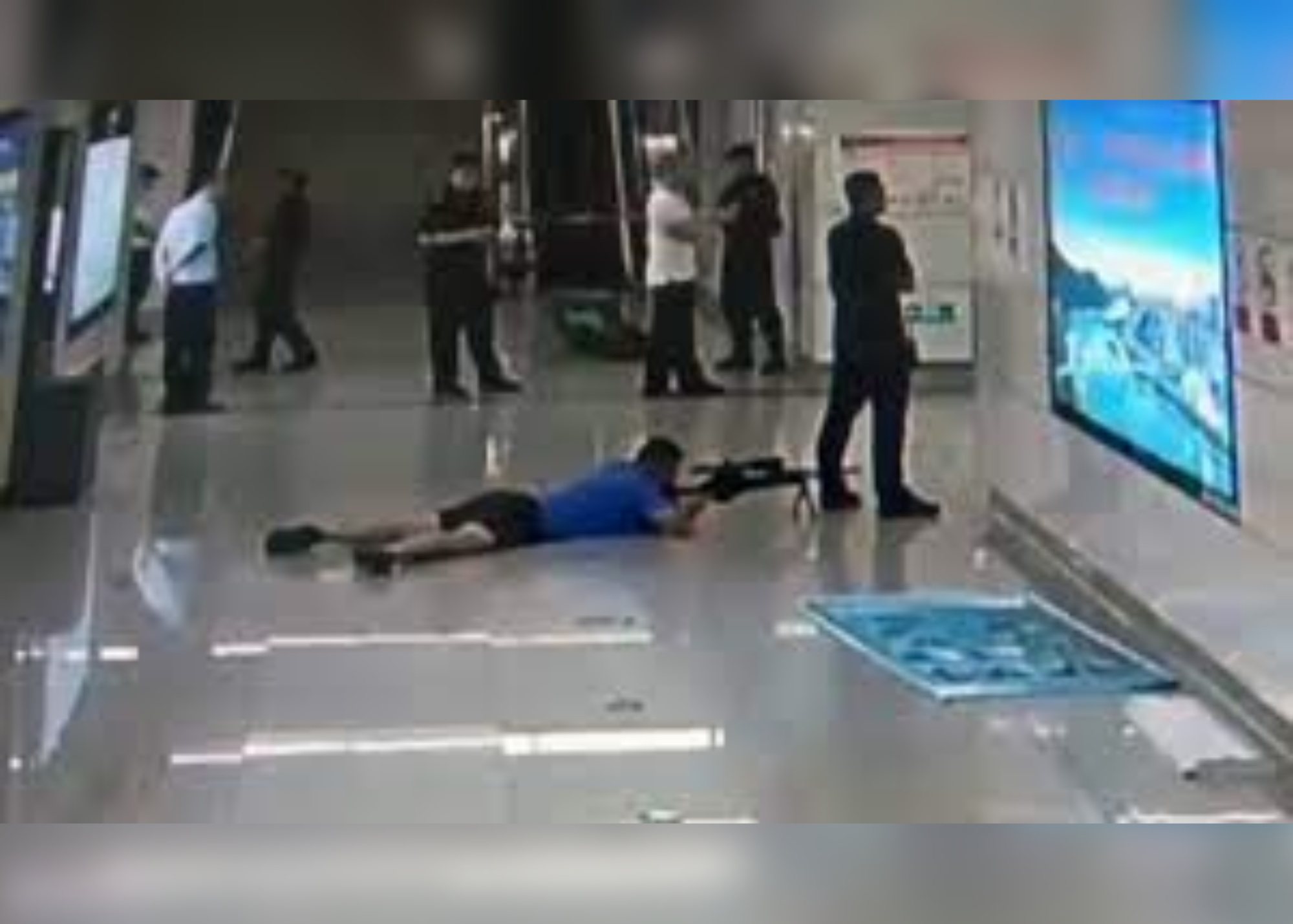 The police sniper positioned himself between his colleagues' legs while shooting the hostage taker. The police sniper is named Captain Zeng Hao and is actually an officer of Special Weapons and Tactics (SWAT). Because of his bravery, he later received an award. However, he admitted that it was the first time he had shot a suspect, which put a lot of pressure on him.

Shocking video shows the moment the suspect wrapped his arm around a young woman while holding a knife during the hostage incident on August 9 in Nanning, South China. Chief negotiator Qi Hongwei and Captain Hao of the SWAT team were called to the scene where the 18-year-old suspect got into a two-hour standoff with police.

Officer Qi remembered that the suspect wasn't speaking and he was refusing to communicate with the cops. The officer said, "I asked him where he was from and why he was doing this. Then I asked him to let the girl go and offered him water, but he said no to everything. "

Captain Hao, head of the Nanning SWAT First Tactical Unit, can be seen in the clip setting up his gun around a corner, standing behind a colleague, and sticking the rifle out between his legs so the hostage-taker wouldn't see him. After two hours of talking, the suspect and the negotiator couldn't come to an agreement, so Captain Hao took a shot.

He only had four inches of the man to aim at, so it was a tricky job, but he managed to do it. Watch the video footage below to know what's happened during the hostage taking and how the cops show tactics and bravery.

Police sniper gets captor from between colleague's legs - TomoNews

Local news said that the 18-year-old suspect, whose name was only given as "Huang," was killed right away. The woman who was held hostage was not hurt or killed.

I'd just finished training when I was called over to assist. I deliberately kept my training gear on in order to find the most suitable sniping position. I lay there for about two hours listening to the negotiations. My hands and shoulders went stiff many times, but I managed to stay focused and, in the end, shot the suspect in the head. Because the suspect was sitting behind the victim, holding her, only about 10 centimeters (four inches) of his head was exposed. Shooting anywhere else might've threatened the hostage, so I ruled out attempting to hit any other body parts.

One YouTube user wrote a comment about the incident happened, and said: "[I] feel so sorry for that girl. imagine first going through all this then your just sitting praying nothing happens to you when the dude inches away from you just blows up. traumatic."

Second in the comment said: "I live in Nanning and I remember this happening pretty close to where I live. Since Nanning is considered a small city in China these sort of events happening are pretty shocking to people who live there. Its strange seeing it on the news in the West though since China usually hides a lot of events like these from other countries."

Another comment reads: "Lesson: When a police in China offers you water, you should accept it."

Lastly, another comment found where it reads: "He did it [referring to captain Hao] all in shorts and a t shirt. What a legend."

If You Are Taken As hostage

A hostage is a person who has been taken by an abductor in order to force another party, such as a relative, employer, law enforcement, or government, to act or not act in a certain way. This is often done by threatening to hurt or kill the hostages if the other party doesn't do what the abductor wants by the end of an ultimatum.

You might ask, "What will I do if I become a victim of a hostage-taker?" Follow these recommendations and advice from Yale's emergency operations team if you are taken hostage.

Five Steps To Take If You Are Taken Hostage

5 things to do if you're taken hostage

Captain Hao shoots the hostage taker and positions himself between his colleagues' legs. The officer is not the only one who receives appreciation and awards. In fact, five officers have received awards for the bravery displayed during the incident that took place on August 9.