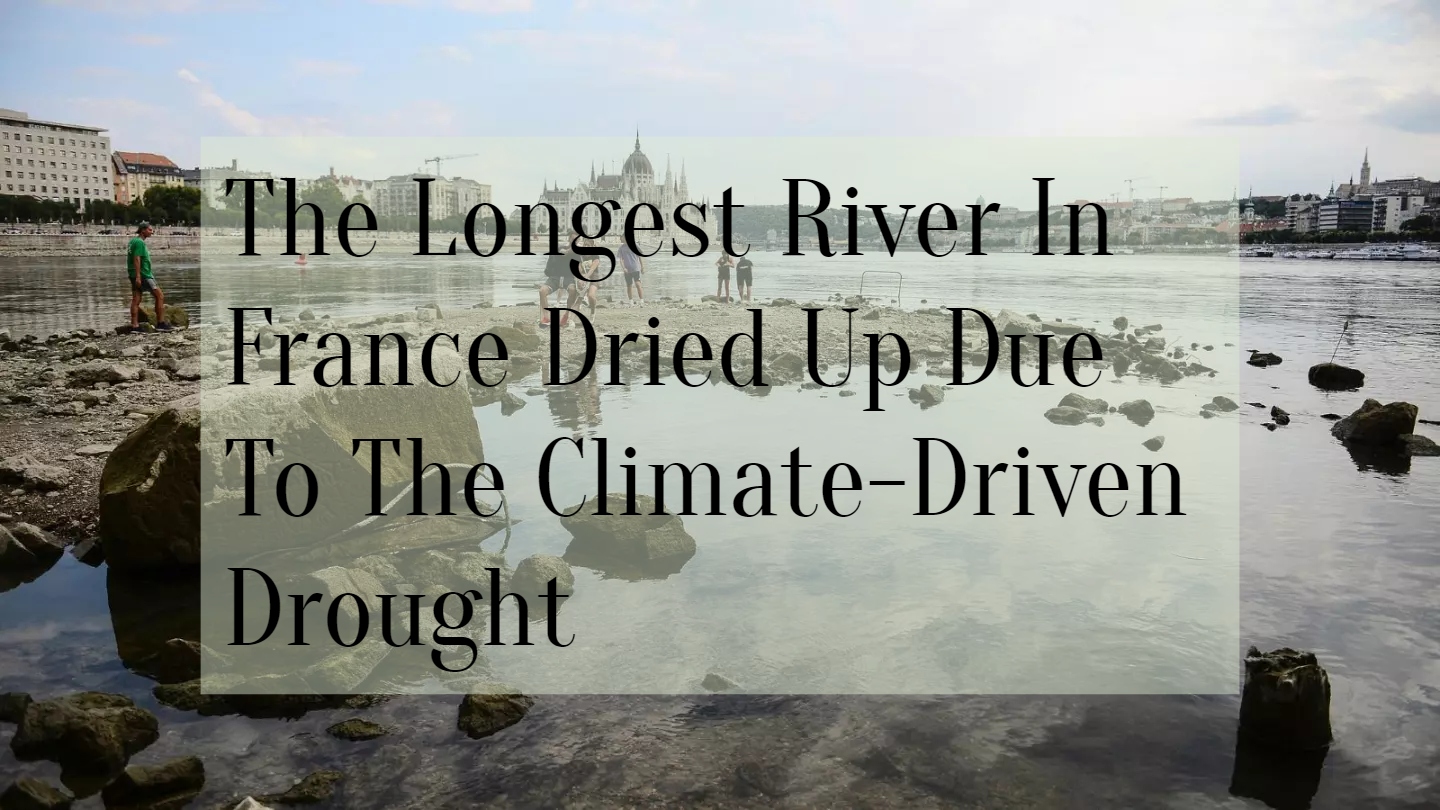 The longest river in France dried up due to the climate-driven drought. When did this happen? It happened on 11 August 2022.

Many of France's powerful rivers, notably the Loire and the Dordogne, have in some locations been reduced to a trickle as the country continues to experience its worst drought on record, and in other areas, lakes and reservoirs have been badly affected.

Almost the whole country of France is currently subject to some kind of water restriction, and when supplies run low, many communes have had to ration or even turn off their tap water completely.

Rivers are slowing to a trickle from the Loire to the Dordogne.

The longest river in France dried up today...

Also, many lakes in France are almost dry, and water levels in reservoirs are dangerously low.

For locals who live too far away to take day trips to the sea, several lakes in inland locations feature "beaches" that include sun loungers, bars, cafés, and gift shops.

Due to a lack of water, some lakeside beaches were forced to close.

The biodiversity and the livelihood of France's artisan salt producers, who make fleur de sel from salt marshes around the country's coastline, are both threatened by the drying up of marshland.

These spectacles have occurred again around Europe, especially in Germany and Italy, where the Rhine, which in normal times transports a ton of freight flow, is critically low and has had to restrict shipping. In Italy, the Po River has dried up.

This major drought not only affected France but also Europe. Europe's major rivers are decreasing under the most severe drought caused by a changing climate in decades.

Seeing huge rivers like the Loire, Po, and Rhine sometimes reduced to a trickle is upsetting enough.

The present drought, however, is also highlighting just how heavily people rely on them for trade, energy, and transportation.

Particularly alarming is the evaporation of the Rhine. It is anticipated to drop below 40 cm at Kaub, a chokepoint close to Frankfurt.

For certain larger ships transporting supplies of oil, coal, and gas, this would make them impenetrable.

Due to Russia's restrictions on gas flow and the country's current energy crisis, German power plants are especially dependent on the deliveries.

France's Rhône and Garonne rivers, which use the most nuclear energy in the EU, have become controversial recently. 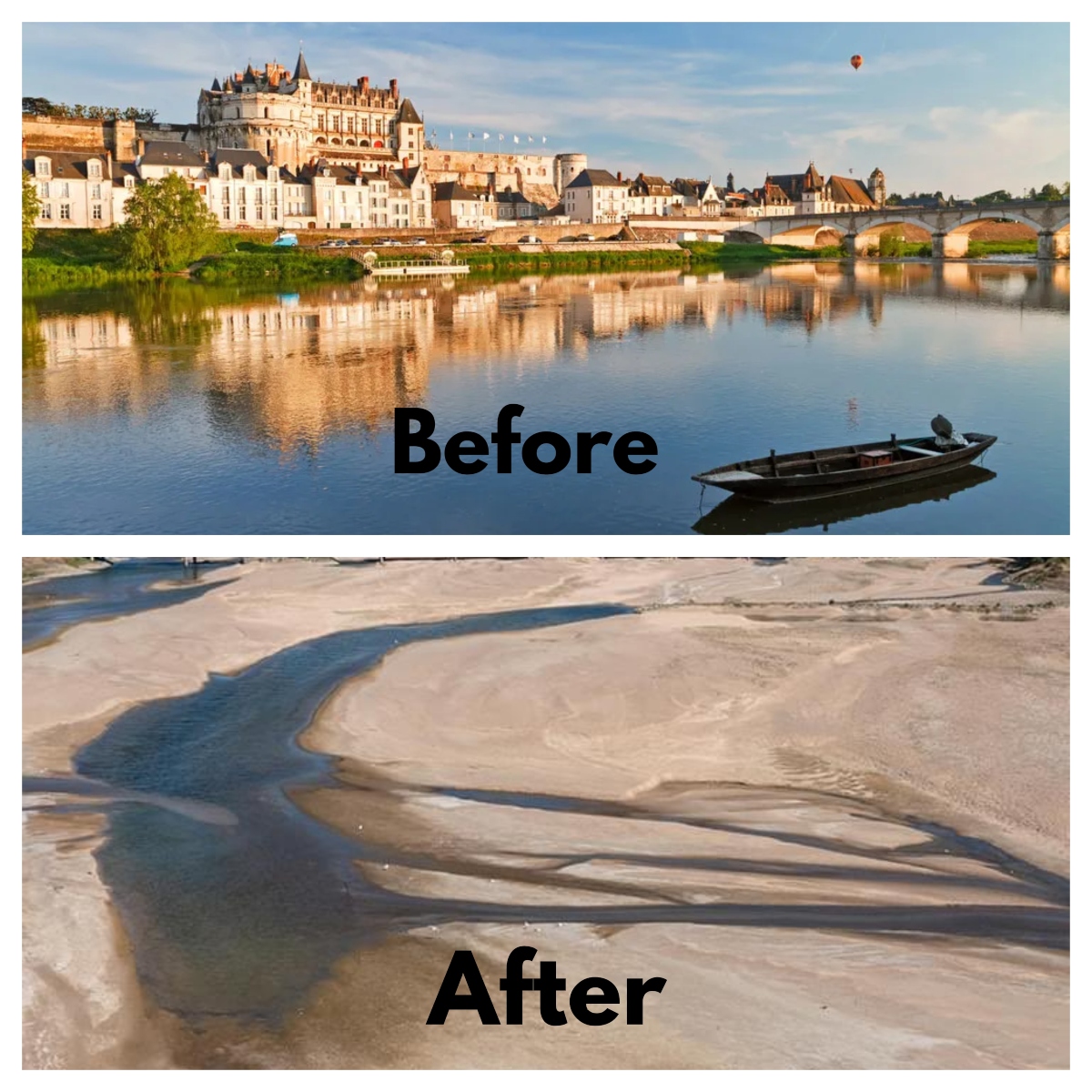 Before and after view of Loire River

Since temperatures were too high for river water to be used to cool the plants, electricity utility company EDF was forced to curtail output at some of its power plants.

A Reddit user has something interesting to say about it, "Across two-thirds of France, a state of crisis has been declared by the government, with rainfall down by some 85%.

Some parts of the Loire river have virtually dried up completely. And for those who don't know, the Loire is the longest river in France: Loire River, longest river in France, rising in the southern Massif Central and flowing north and west for 634 miles (1,020 km) to the Atlantic Ocean, which it enters south of the Bretagne (Brittany) peninsula."

Another said, "and Three nuclear plant depend on Loire river reactor cooling."

FrenchFranck shared some information in response to the above comment, "Four nuclear power plants : Chinon, Saint Laurent, Dampierre and Belleville. Producing 6700MW right now. There is still a lot of water available even it is really very dry this year.

It affected Europe and its rivers too. As a result, the longest river in France dried up due to the climate-driven drought.