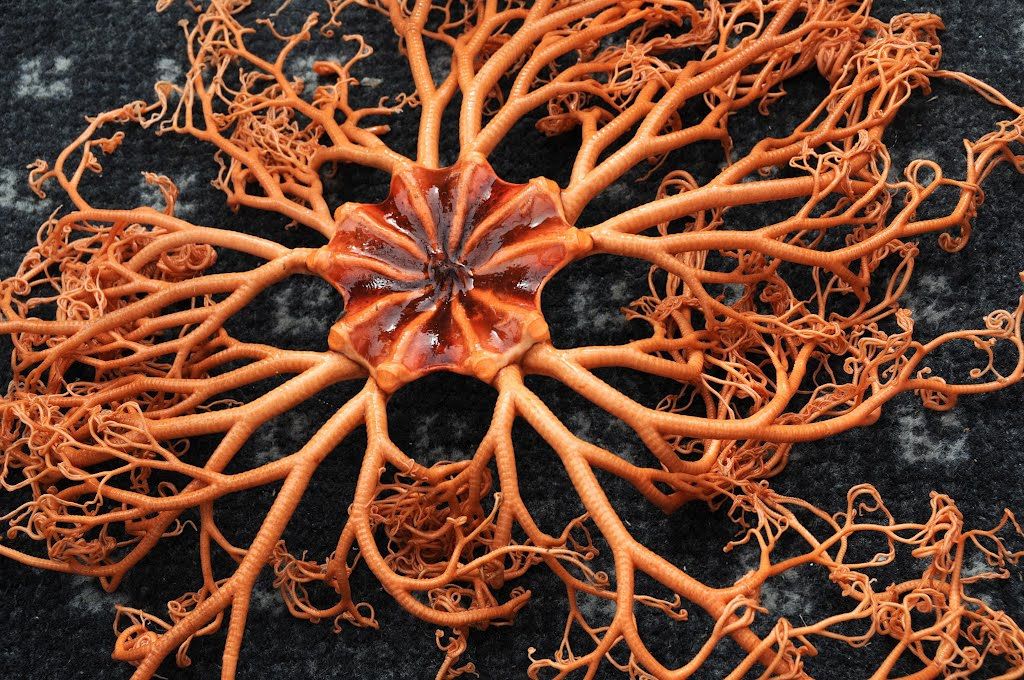 The basket starfish is a sort of marine creature that is frequently discovered in the ocean's depths. It is also known by the name "Shetland Argus."

They have massive "branches" for limbs that can grow to a length of up to 70 cm.

This characteristic branching of the arms is what gives them their star shape, which is how they got their name. 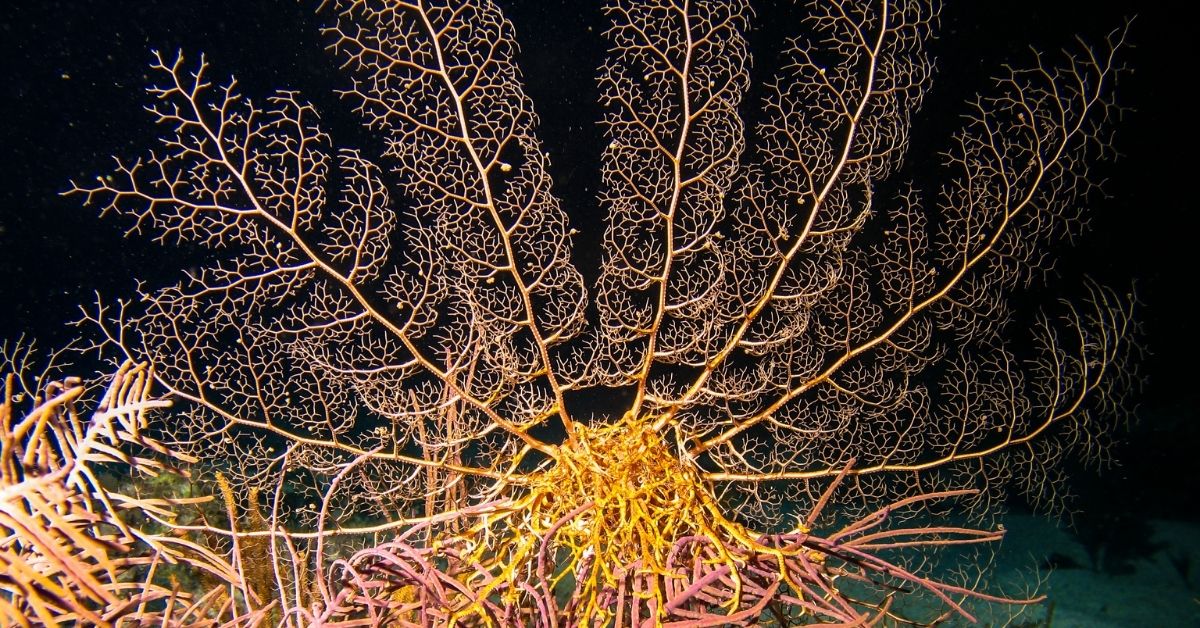 The basket starfish is also known as the snake star, common basket star, brittlestar, and basket star. These are just a few of its many other popular names.

Echinoderms are the collective name for the group of creatures that includes the basket starfish.

Echinoderms are easy to spot because their bodies are symmetrical in five ways and their skeletons are often made of plates of calcium carbonate that make up their tough skin.

The scientific name of the Basket starfish is Gorgonocephalus arcticus.

When referring to starfish, the term "basket star" can be used to refer to any member of the family Gorgonocephalidae.

With a disk of up to 38 mm across, the basket star has a yellowish to brown tint. The disk has five pairs of radial ridges without any spines in between them.

The fact that their long arms extend from a central disk and that they can reach a size of up to 70 centimeters in arm's length alone despite having a body diameter of only 14 centimeters makes it necessary for them to have a home with a large tank.

The outer sections of the arms continuously branch off, creating a dense tangle.

It's been estimated that basket starfish can live up to 35 years when left to their own devices in the wild.

On the other hand, it appears that they do not live nearly as long in captivity as they do in the wild, likely due to the difficulty of maintaining them and the stringent requirements they have. 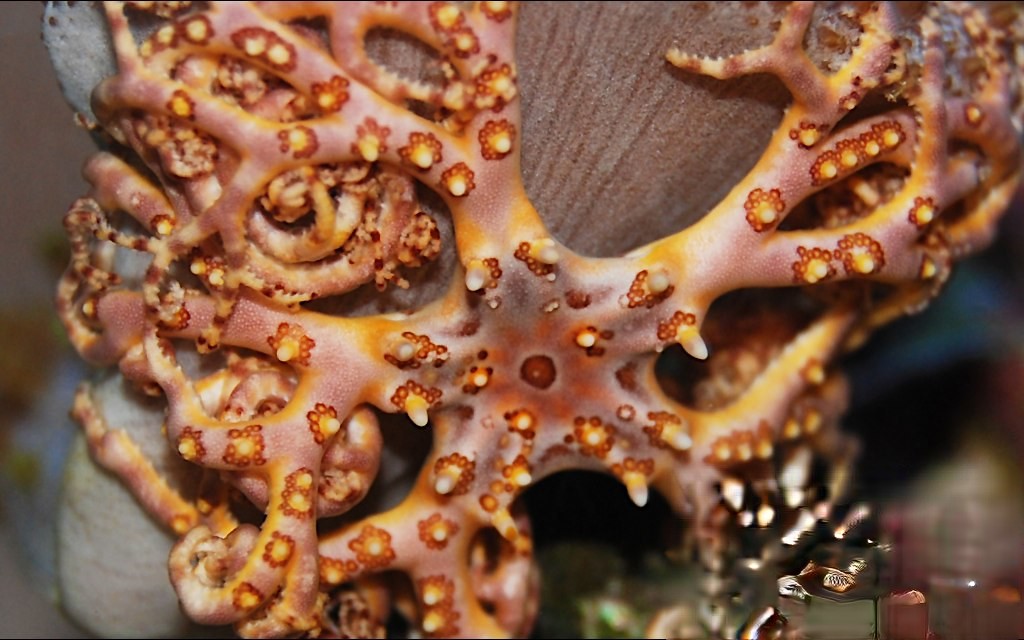 A close up view of orange Basket Starfish

From the Arctic to Cape Cod, basket stars can be found on a variety of bottoms at depths ranging from subtidal to more than 1200 meters.

Generally speaking, you can find basket starfish in the depths of the ocean and in locations such as Florida and the Caribbean.

However, they have also been discovered 15 meters below the surface of the water off the coast of South Africa.

They ambush their prey by extending their arms outward from their hiding spot and catching it while maintaining their balance atop the rock of their choice.

Due to the way their bones are set up, arms can move a lot "laterally," but they are rigid along the oral-aboral axis.

Tube feet lack suckers and ampullae, but their wall muscles are well-developed.

A basket star has ten bursae, which are body wall invaginations that open to the exterior through ciliated slits.

Between the bodily fluids and the moving water, gases are exchanged.

Even though they are related to starfish, basket starfish have a number of important features that set them apart from their relatives.

Basket starfish have a large number of arms, but each arm also has a number of branches growing off of it.

The name of this species comes from the fact that it is capable of creating a web that resembles a basket in order to capture its victim.

Because of their ingenious design, they rarely find themselves in need of food.

How Do Basket Stars Eat?

To grab rather large swimming prey, basket stars use their suspension feeding technique (crustaceans and polychaetes). Arm and podia spines are used to do this.

Duck-basked stars emerge from hiding spots at night to take feeding positions, holding their branching arms in a fan-like formation in accordance with the ebb and flow of the tides.

Because of their unusual structure, basket starfish are able to capture prey in their webs, much like spiders, and then consume them after covering them in a protective covering.

Once the animal has caught its prey, it will usually cover it in mucus before eating it.

On the other hand, basket starfish do not merely place their prey directly into their mouths to consume it.

In point of fact, each of their arms contains five canals, and their mouths are located beneath their bodies.

They consume their food by first ejecting their organs, including their stomach, from their bodies and then consuming whatever they have caught.

Basket starfish are carnivores that will eat just about anything.

They also engage in cannibalism. They will figuratively consume practically everything that is placed in front of them. 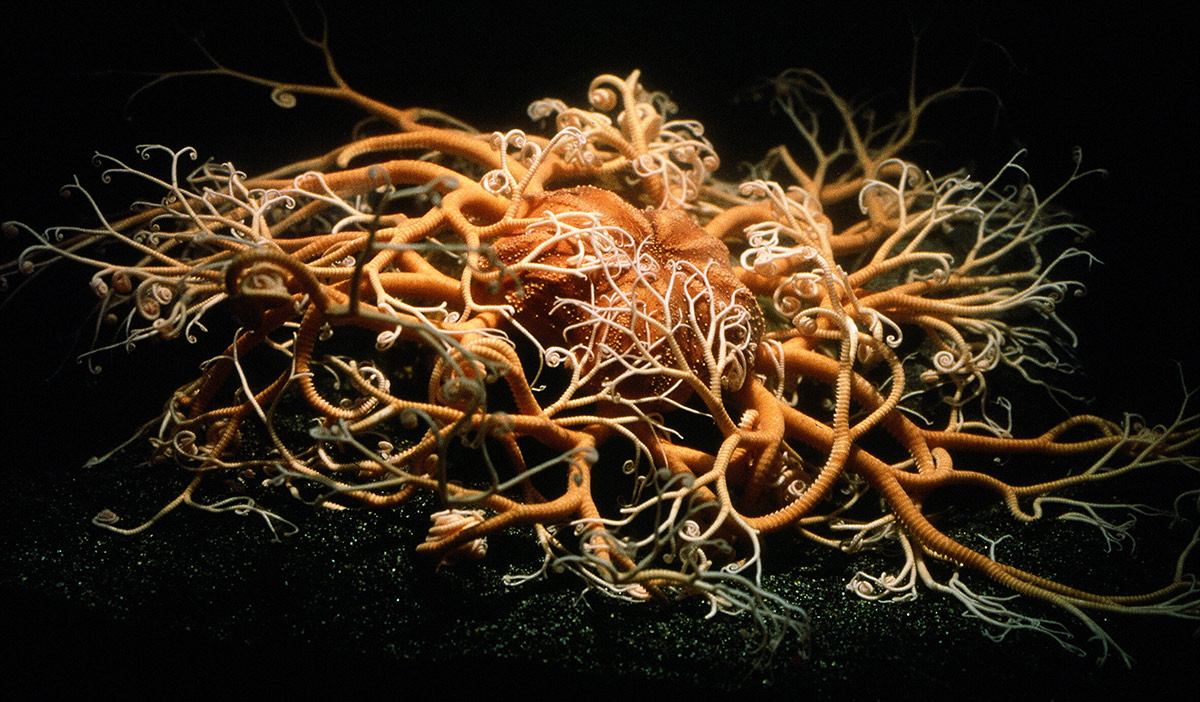 The orange basket star with its tangled arms

The structure of the basket starfish, which resembles an open basket, appears to make them vulnerable to attacks from fish and other critters that are on the lookout for food.

However, due to the ingenious design of these animals, they are able to wrap themselves into a tight ball, much as an armadillo would do.

This makes it significantly more difficult for a predator to get a bite on them.

They will also use this strategy when the current is strong so they don't have to be in the water as much and don't get swept away by it.

The basket starfish will be in a less dangerous situation if it can make itself smaller.

Even if they don't have any harmful chemicals, brittle stars are not eaten because their skeletons are too hard.

Even though some species of brittlestar contain spines that are not pointed, none of them are known to be deadly or venomous.

There is a Reddit video about Basket starfish too. Here are some of the comments.

Surfella asked the question, "I wonder if it can go flat like a regular starfish. How does it move along the bottom?"

As mentioned earlier, it moves through its articulated arms.

Another raised a good point, "There is just so much crazy stuff in the oceans that nothing surprises me anymore, I'm that old."

Yes, the ocean is a different world like it has biologically immortal jellyfishes, deep sea sharks that look ALIENS from another planet, and whatnot.

Yes, basket stars are definitely alive. Although the majority of them reside in the deep sea or in waters that are cold, some basket stars can be seen in the shallow reefs of tropical waters at night.

What Do Basket Starfish Eat?

Small, razor-sharp hooks are embedded on each branch, allowing the animal to catch prey. It primarily eats zooplankton. Basket stars have the freakishly amazing ability to grow back their limbs if they are hurt or cut off by a predator.

Yes, they do move. Many brittle and basket stars propel themselves ahead with strong arm movements that raise their bodies. Slithering along the bottom are other species. Brittle stars can cling to rocks or coral above the ocean floor because they are skilled climbers. To flee from predators, brittle stars sever their arms or other body parts.

Fortunately, basket starfish are no longer endangered, despite the fact that other starfish species, such as sunflower starfish, have experienced a 90 percent population decline. They can, however, very easily pass away when kept in a home aquarium and are quite tough to care for.