Firefighters Use "Wetter" Water That Can Put Out The Fire Sooner 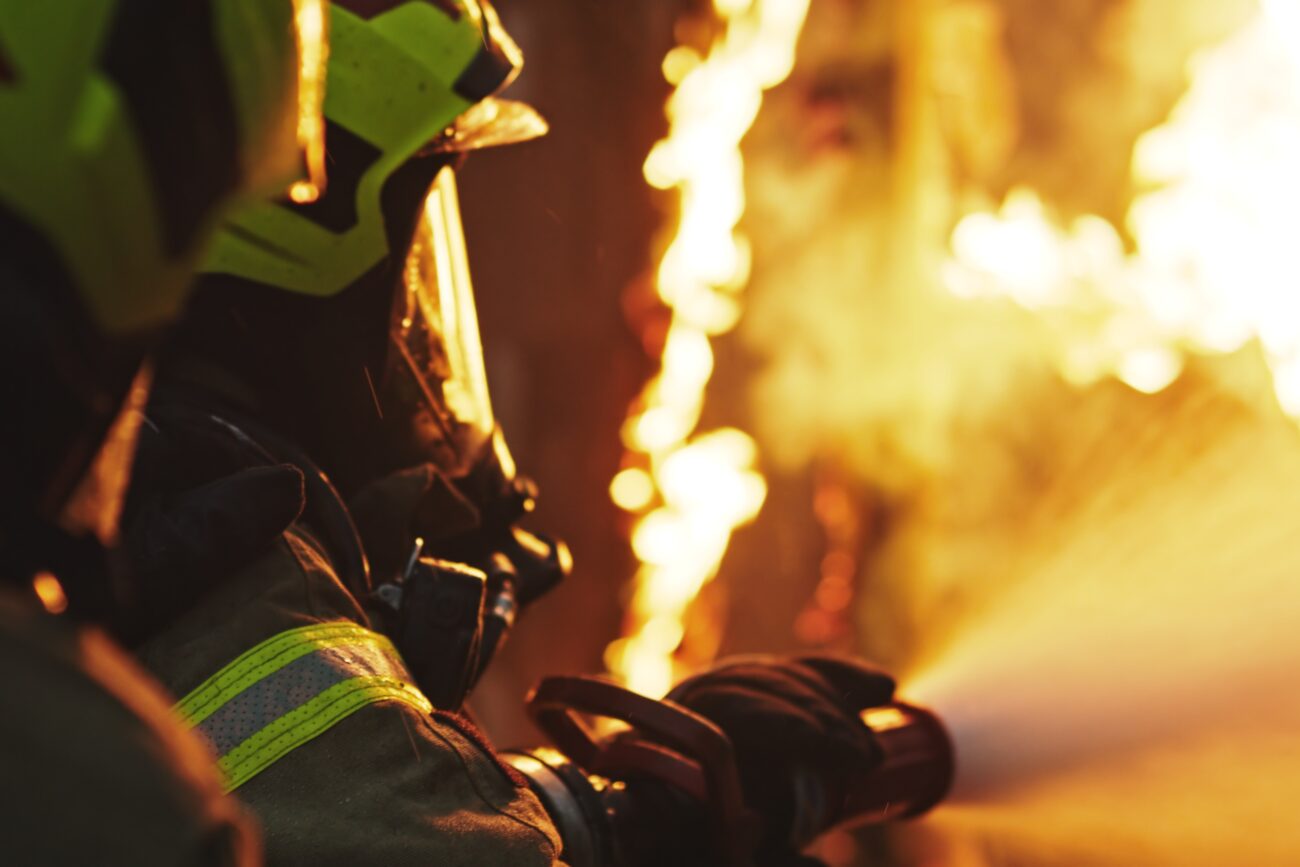 Water is wet, which ought to be one of those "duh" realities. But did you know that it is possible for it to be "wetter"? To extinguish flames, firefighters use "wetter" water. This entails enhancing water's capacity to extinguish fires by the use of synthetic chemicals.

Firefighting has triumphed over the gods of war, and in fact, this victory has been so comprehensive that it has allowed firefighting research to advance ten years.

For instance, it wasn't long ago that the effectiveness of water fog, chemical and mechanical foam, and carbon dioxide in putting out oil and gasoline fires on the high seas was not widely acknowledged. 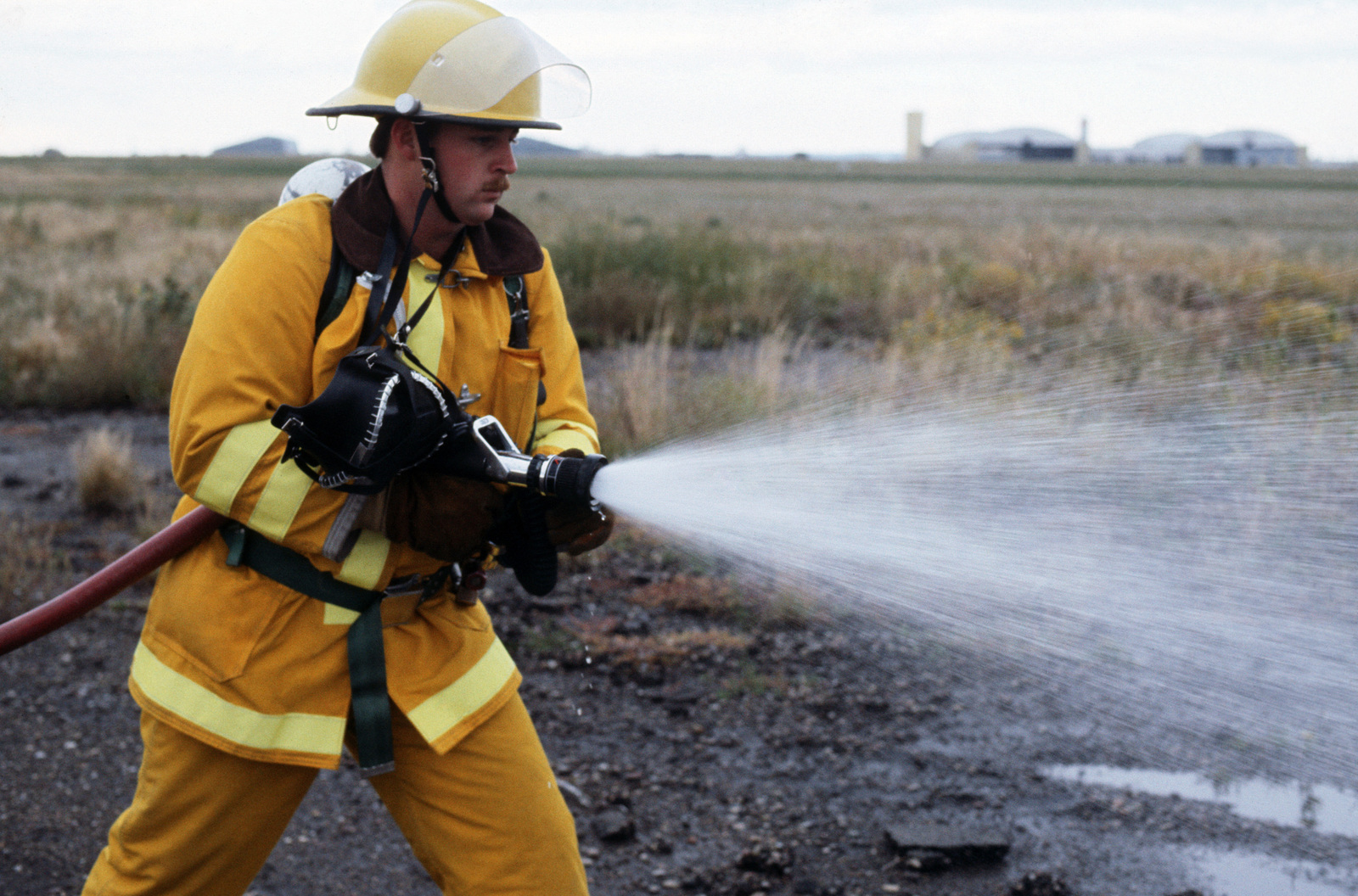 A firefighter holding a water hose during an accident

You might be able to spot some signs of future breakthroughs in firefighting if you carefully scan the horizon right now, yet true science can never remain still. After a careful search, here is what may turn out to be your new discovery: wet water.

Why do firefighters use "wetter" water? Water just evaporates when it comes in contact with some types of fires because they are so hot. The spreading and penetrating abilities of water are improved by wetting agents.

You've known for a long time that water alone won't put out an oil or gasoline fire. Fire services began employing carbon dioxide and chemical, mechanical, and foam extinguishants to aid in putting out fires decades ago.

But even a fire started with a match could be difficult to put out with just regular water. For example, the burning substance may be too thick and dense to allow water to pass through and put out the flames completely.

Fire departments consequently employ chemicals that moisten the water. These offer water the ability to spread out more effectively to cover a larger area or retain contact with a solid surface.

What Is Wet Water?

Wetter water is made to offer the wettest water penetration agent possible to expert firefighters. Wetter water is a penetrating ingredient that, when mixed with water, raises the temperature at which water evaporates.

As a result, the fireman can use less water in less time. Up to 30% less time will be needed to put out a fire when using wetter water. Wetter water functions whether it is soft or hard.

It can be used in the tank truck while en route to the fire scene and mixes fairly rapidly. Just fill the tank with the recommended amount of water, which is written on the product's label. 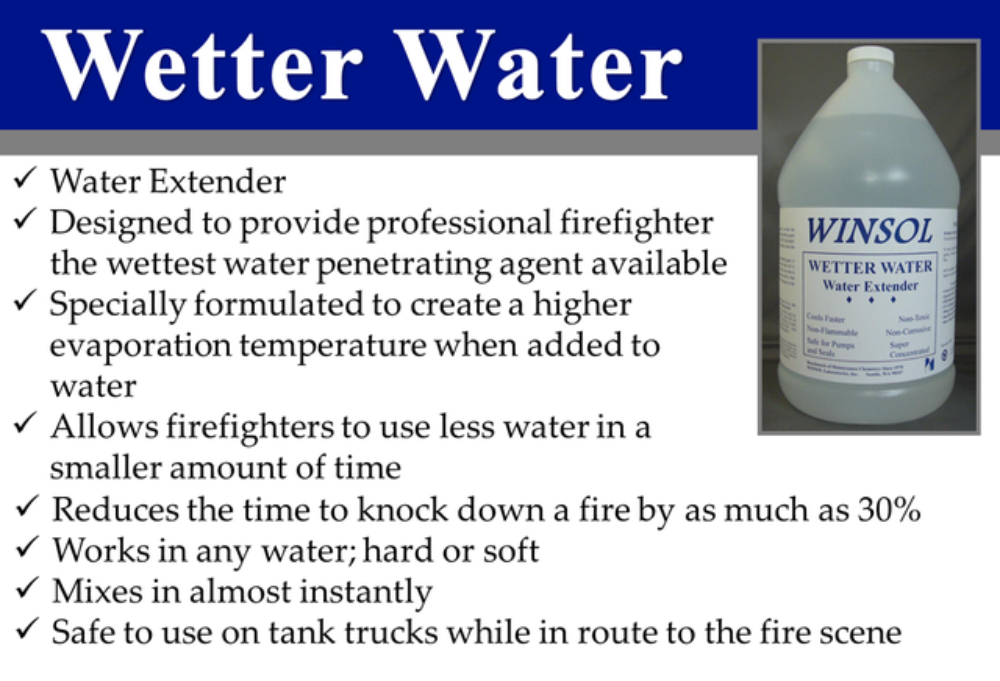 Wetter water bottle and its specifications written on a white background

How Can You Make Wetter Water?

Water is used in firefighting to dampen other objects. However, water can bead up and not penetrate an object's surface when water bonds are cohesive. However, as you add detergents, water gets wetter, the cohesive forces weaken, and it can wet other things, which puts out a fire.

Wetting agents penetrate the water molecules and make them less sticky, which also lowers the surface tension of the liquid. They may also aid in raising the temperature at which water vaporizes. This enables firemen to wet surfaces more quickly and with less water.

In wet water, surfactants like ethylene or propylene glycol are the most prevalent compounds. They facilitate the flow of water into burning objects and its distribution over surfaces.

Here is the "wet water'' formula:

But in some cases, wetter water is not enough. In those cases, firefighting foam is used.

When Do Firefighters Use Foam?

The use of AFFF agents that contain PFCs has generated concerns about the possibility of contaminating groundwater supplies. Some AFFF formulations comprise a family of compounds known as perfluorochemicals (PFCs).

The 3M Company said in May 2000 that it would stop using the electrochemical fluorination technique to manufacture PFOS (perfluorooctanesulphonate-based flurosurfactants). Before this, the most common PFCs that were used in firefighting foams were PFOS and its derivatives.

What Type Of Water Is Used By Firefighters?

They use water mist. Water mist is a great way to put out a fire because spraying atomized water directly on the flame has a big cooling effect.

What Is The Benefit Of Using Wetting Agents In Fire Fighting?

Wetting chemicals increase the effectiveness of water in putting out Class A fuel fires. Wet water is sometimes used to describe water that has a wetting agent added to it. This is because the added wetting agent makes the water better at moistening surfaces.

Do Firefighters Just Use Water To Put Out Fires?

It is true that firefighters use "wetter" water that is wet enough to put out most fires, but it is also true that there are some situations in which it is not. In those cases, some other means like firefighting foams or other things are used.