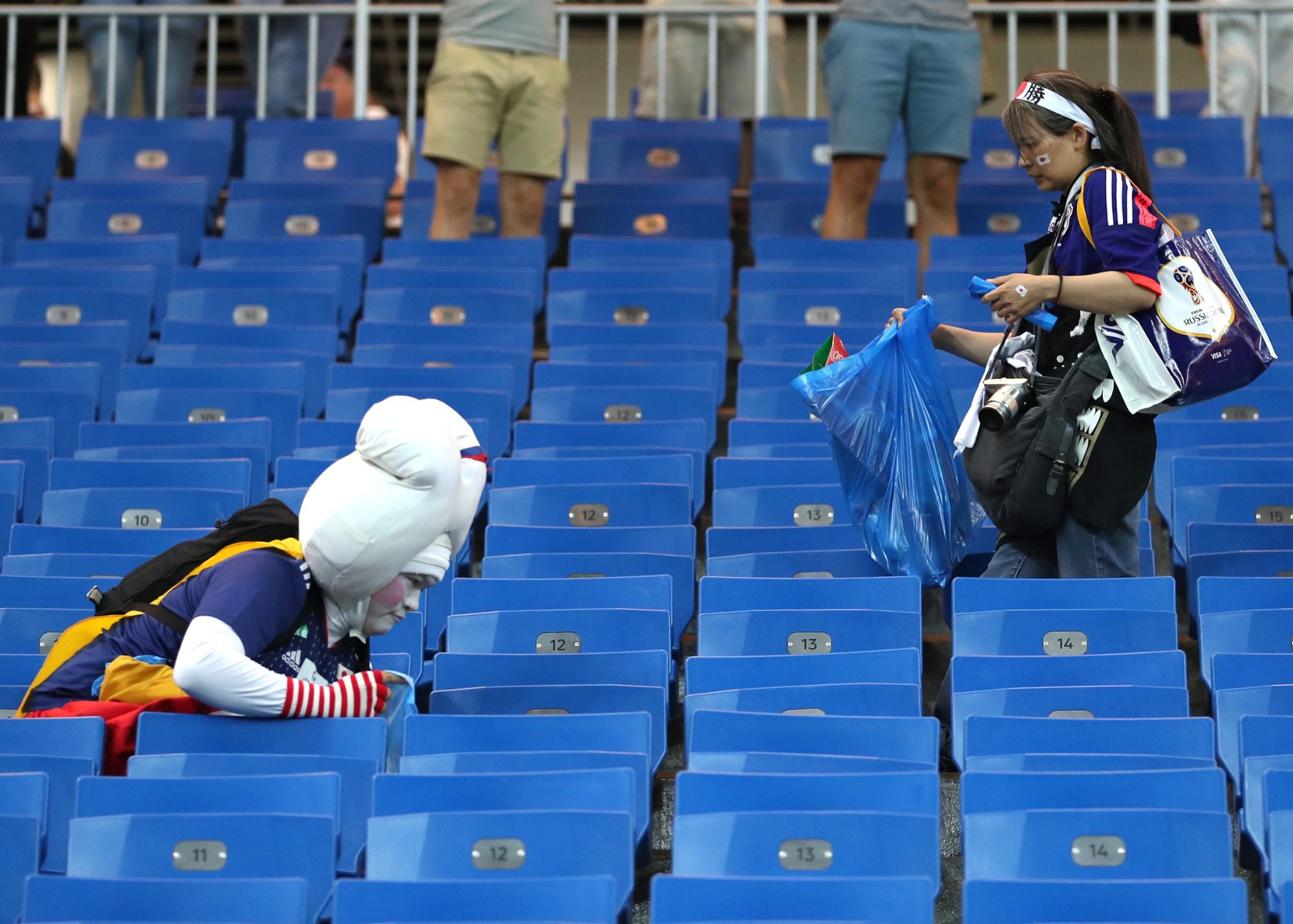 Japan fans stayed late to help clean the World Cup arena. Because of their fine work, many people express their happiness after seeing numerous photos of them picking up trash while carrying a garbage bag. The Japanese football fans helped clean up after the first game of the 2022 FIFA World Cup on Monday when Qatar played Ecuador.

Bahraini, a YouTuber with the pseudonym Omar Al-Farooq, noticed the Japanese spectators' cooperative and caring characteristics. In his video, which he uploaded to Twitter and Instagram, he highlighted the inspirational moment.

In the video, which has been viewed over 2.5 million times on Twitter, Japanese supporters are shown clearing up trash left in the stands by World Cup fans at the Al Bayt Stadium in Al Khor, Qatar. He captioned the video, "Something you didn't see from the opening of the World Cup!" which accumulated nearly 9K retweets, more than 2K comments, and nearly 58K likes.

Watch this video as he interviewed some of the Japanese spectators:

One viewer named Rannel Camilo commented: "This is a slap of respect to all the world.. Japan is so far in education and respect to the rest of the world!"

Another user shared: "It's true. In my country they did the same. They never leave the stadium or any place they visited without cleaning."

Lastly, another comment found: "I love Japanese people. all my Years of Living, I have yet to run into a disrespectful Japanese person."

Following the match between Qatar and Ecuador, the Japanese fans apparently decided to remain in their seats. After the crowd had left the stadium, the fans began going around and picking up litter on the floor and placing it in trash bags they had taken with them. "Why are you doing this?" Al-Farooq asks one of the fans.

"We are Japanese, and we do not leave rubbish behind us, and we respect the place," the woman responds. Another fan clarifies to YouTuber Al-Farooq that they chose to assist the staff in cleaning "not for the cameras."

Aside from typical trash, the Good Samaritans also collected crowd-left flags in the stadium. Many social media users praised the Japanese fans for cleaning the stadium despite the fact that their team was not playing that day. Here are some of the comments found in the Instagram post about the Japanese in the arena.

They have respect and install respect in their children. So as we see this year and in previous years, the Japanese people are above others in their actions.

May we the Arab people learn this level of respect and start cleaning up behind us instead of waiting for a domestic cleaner to do the cleaning. Something I respect so much about Japanese people and their culture.

Visitors to Japan often notice how clean everything is despite the lack of trash cans and street sweepers. Many people from other countries are surprised when they go to Japan and see how clean the streets, train stations, and bathrooms are. Also, you can't see any trash, and there aren't many trash cans on the streets because people are told to take their trash home.

Moreover, the schools in Japan train them to be clean in their surroundings. So, the students clean their own classrooms, hallways, and other parts of the school.

Students from the Harvard Business School recently went to Japan to study how the Shinkansen staff cleans effectively.

In their study called "The 7-Minute Miracle," one person on the cleaning staff can pick up trash, wipe down all the tables and floors, turn around all 100 seats, and keep the trains clean and tidy in just 7 minutes.

Have you ever wondered why Japanese people are so meticulous about keeping things clean? The most likely answer to this question is that religion may have something to do with it. For example, they have to wash their hands before praying every time they go into a Shinto shrine.

Also, Buddhism teaches that cleanliness is important because it has a direct link to having a peaceful mind. So, it has become their habit to clean up after themselves and take care of their trash at home.

Japan has made headlines before for its commitment to environmental stewardship. Even though their team lost 3-2 to Belgium at the 2018 FIFA World Cup in Russia, Japanese fans were seen doing the same good things after their team's game against Colombia. The touching viral moment subsequently prompted football supporters in other countries to clean up after their teams' games.